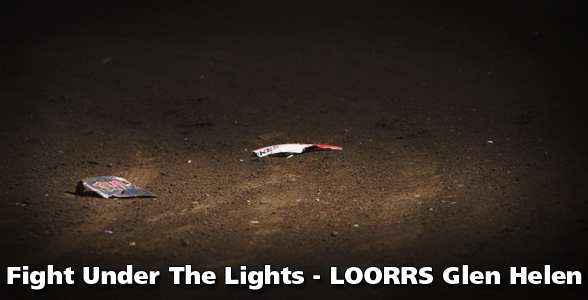 The Lucas Oil Off Road Racing Series made its way back to Southern California for Round 9 at the legendary Glen Helen Raceway in San Bernardino California. Always a fan favorite, Glen Helen Raceway has played a huge role in off-road motorsports for many years and it is only fitting that the series chooses Glen Helen to raise the bar and race under the lights. One of the shorter tracks in the Lucas Oil Off Road Racing Series circuit, Glen Helen makes drivers take risks and put it all out on the line in order to get to the front of the pack.

Opening ceremonies kicked off with Pro 4 Unlimited racing action with the dominant duo of Rob MacCachren and Carl Renezeder leading the field to the green flag. MacCachren and Renezeder have been absolutely unstoppable in 2013 and have put on a show each and every time they hit the track. When the green flag dropped the #21 truck of Rob MacCachren would be the first to see the shadows of daylight through the first turn. Unfortunately for MacCachren, those few seconds of glory would be short lived. Beating and banging their way though the field, Kyle LeDuc and Eric Barron had a score to finish and they weren’t going to let MacCachren stand in their way.

Lap 7 brought out a full course caution for energized Pro 4 field; this was good news for MacCachren who would get a chance to redeem himself after getting shuffled around towards the middle of the field. After the restart it was back to business as usual for the front-runners Kyle LeDuc, Eric Barron and Rob MacCachren. As the laps clicked down one by one, Eric Barron was just planning his attack on arch nemesis Kyle LeDuc. Barron would unload his LAT Toyota out of turn two and into the (not so) rhythm section putting together a very aggressive yet strategically placed pass on Kyle LeDuc; muscling his way to the front of the field. Barron’s aggressive move on LeDuc would be detrimental to the #99 and force Kyle LeDuc to pull off of the track with a wounded truck. One lap later, Eric Barron would face mechanical failure of his own and find himself on the sidelines watching the remaining three laps in Round 9 from the outside of his Toyota.

Greg Adler would sneak past Rob MacCachren with just one lap to go, putting Adler in the number one position leaving Rob MacCachren and Curt LeDuc to round out the podium.

Pro Lite Racing was up next and for the first time in the Lucas Oil Off Road Racing Series there has been a true qualifying session and LCQ (Last Chance Qualifier). This was a huge step for the series and for the class as a whole. The widely popular Pro Lite Unlimited class has grown exponentially within the last couple years with the integration of the spec V8 motor. Three of the youngest guys in the class (Bradley Morris, RJ Anderson, and Sheldon Creed) would start at the front of the pack leaving the 2011 Champ Brian Deegan in the fourth place position.

A twenty-truck field seemed to do the trick here at Glen Helen, despite a couple yellow flags, most of the damage that was done in Round 9 was all self inflicted while the battle between RJ Anderson and Bradley Morris kept the crowd on their feet. When the dust would settle, Bradley Morris would cross the finish line first, followed by the 2012 Pro Lite Champion RJ Anderson and “The Prodigy” Sheldon Creed in the third place position.

After a nail biting round of racing for the Pro Lite Unlimiteds, the Pro 2 Unlimiteds weren’t going to be out done. There were a couple wild cards for the Pro 2 division in Round 9 of the Lucas Oil Off Road Racing Series: one of them being the return of Bryce Menzies to short course racing in Southern California and the other being “The Cowboy” Marty Hart qualifying on the pole for both Round 9 and Round 10; this positive momentum is often unstoppable.

At the front of the pack, Marty Hart and Carl Renezeder would line up side by side directly in front of the self-made longhaired hippy from Pahrump Nevada Robby Woods. Next to Woods would be the fill in driver of Bryce Menzies in the Stronghold Motorsports Loctite Pro 2.

Marty (Hart) the one man party would lead the Pro 2 Unlimited race for 15 of the 16 lap main event running an absolutely flawless race, hitting his marks every time around the track. Going into lap 14, Marty Hart would be followed by Bryce Menzies, Carl Renezeder, Rob MacCachren and Robby Woods as they all got put back in order after a full course yellow flag. When the green flag dropped to resume racing all hell broke loose. In a matter of one lap; Bryce Menzies overtook Marty Hart, Carl Renezeder would sit dead last after getting spun in turn two, Brian Deegan (from the 6th place position) would put a pass on Robby Woods and in the same motion door slam Rob MacCachren causing MacCachren to lose all power with one turn to go.

When it was all said and done, Bryce Menzies would stand on top of the podium followed by Marty Hart in second place and although Brian Deegan brought his truck to the podium he would not be receiving third place (as he hoped for). The Lucas Oil Officials made a decision to penalize Deegan for the hit he put on Rob MacCachren in turn 4 and would award the third place position to the young gun #99 Robby Woods.

Round 10 of the Lucas Oil Off Road Racing Series continues back at Glen Helen Raceway where we are sure to see some carnage and drivers hanging it all out, it’s now or never, the points championship hunt isn’t over yet.