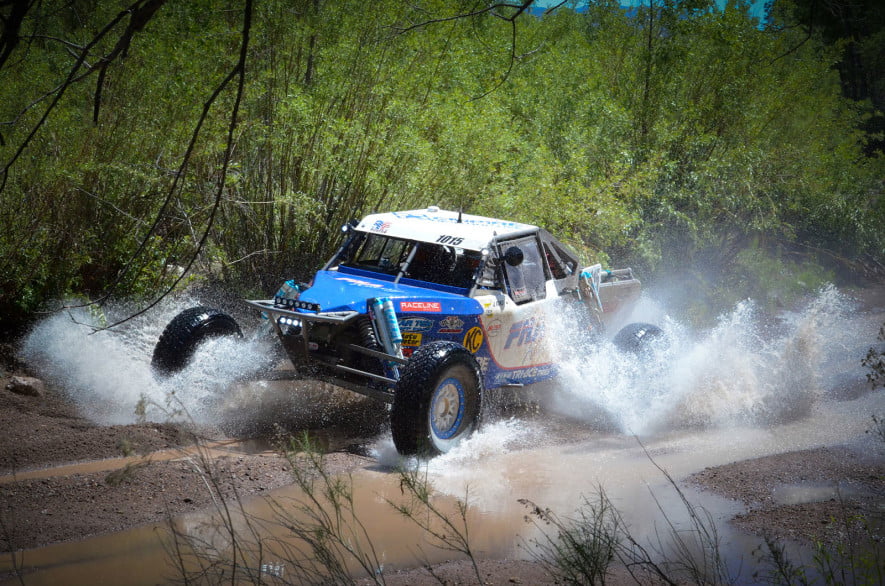 Southern California industrial mechanic James Ford roars through the water
during the annual running of the Knotty Pines 250 June 8 in Caliente.

CALIENTE, Nev. – If ever an off-road racer had reason to celebrate; it was competitors like charger James Ford, who captured the highly-competitive Class 10 category in the annual running of the Knotty Pine 250.

Presented on June 8 about 180 miles north of Las Vegas in what could be termed “The God’s Country of Motorsports,” Ford clicked off four consecutive laps for what was nothing less than a rendition of “Get Out of Vegas” weekend.

The event played host to more than 100 entries – far more than expected – in the hills of Caliente, a small-town atmosphere highlighted by a level of peace and quiet until residents annually greet the throng of competitors with open arms for another Southern Nevada Off Road Enthusiasts spectacular.

“This one was a great event,” said SNORE President Kenny Freeman, who spends his weekdays installing carpet and his weekends spreading the word of SNORE. “Everyone was happy, including both the town and the racers that have combined efforts to become a spectacle of the area each time.

As is the case with every SNORE event in Caliente, this particular race once again was presented with special challenges not usually found in an off-road race, which this year also included a series of running water after a wet spring season.

Fittingly, Southern Nevada’s first summer temperatures cooked the Las Vegas area, as racers converged on Caliente’s lower temperatures hovered in the 80s during some of the hottest racing of the year.

Ford captured the highly-competitive Class 10 category with a four-lap time of 5 hours, 3:37 minutes. On a course dominated by beautiful scenery and lots of water, the latest spectacle was off-road racing at its best in a town that loves the sport and the people who participate in it.

An industrial mechanic, who works for a water agency at a pump plant at Parker Dam in Southern California, was returning to Caliente for the fourth time.

“I grew up in Parker, so the only thing to do in Parker was ride motorcycles,” said the 50-year-old Ford. “I have always loved off-road racing.”

The only problem Ford had came in one of Caliente’s true challenges where the drivers were expected to slow down.

“I got in the gas a little too much and it seemed like the track was a lot slicker,” he said. “There were a lot of cars off the course. We had not flats at all and the difference Tri-Ace Tires. We started using them last year.”

Ford does all of his own prep work, so his schedule is always hectic leading into the race.

“My wife is my co-driver and it’s just the two of us getting everything done,” he said. “Once you get to the race and start having a good time, I forget all about it and can’t wait to do it again.
As though the Ford family including his wife, Tammy, didn’t have enough concerns during the weekend, their dog had puppies two weeks before the race.”

What makes everything so much fun was the fact that the Fords love the people who compete in the race.

“We have made a lot of friends in off-road racing,” he said. “Most of the guys I race against are friend. When it’s all done, you talk about the stories and the problems you might have had along the way.”

The Ford family will run in the annual KC HiLites off-road race in July in Barstow, Calif.

“We haven’t race in Barstow for almost four years,” he said. “It’s going to be interesting going back to Barstow. It’s going to be a MORE and SNORE race combined. Last year was our first win in Class 10 of the Midnight Special and we won by six tenths of a second.”

Proof that SNORE gets the job done came via word-of-mouth when Freeman received correspondence saying that the annual KC HiLites Midnight Special would be run with MORE July 26-27 in Barstow.

“KC HiLites has been with SNORE for many years, and the next event is certain to be the same,” Freeman explained. “We couldn’t race during the day in the summer months, so our people got together with KC HiLites to present a night race.”