Johnny Campbell Racing is more than just a featured shop in San Clemente; it is an institution and arguably the most important headquarters in the sport of off-road. This is primarily because of Campbell’s pedigree of 11 Baja 1000 championships to his name alone and the legacy he has established by grooming today’s fastest desert racers to follow in his footsteps. But more recently, the JCR Institute title is due to Campbell’s being tapped on the shoulder by the off-road greatness of Robby Gordon, who handpicked Campbell to be his co-pilot in the upcoming 2012 DAKAR Rally. Not only will Campbell have Baja 1000 co-champ Quinn Cody entered in the elite pro motorcycle class in this DAKAR but Campbell himself is one of the favorites to win the OA DAKAR title this year.

JCR carries on the rich tradition of its origins with Bruce Ogilvie at the helm of to American Honda’s famed desert racing legacy. Johnny Campbell took over operations and moved the shop from Torrance to San Clemente early in 2008. 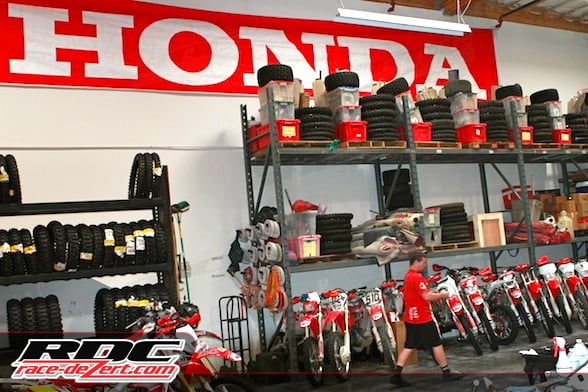 RDC took an unobstructed tour of the JCR facilities in San Clemente as the entire team prepares for what is perhaps the most important motor sports event on the planet, at least from an international perspective. We get the scoop right from Eric Siraton, the chief technician at JCR and the one man who is responsible for all of JCR’s machines.

The shop is tucked away between other industrial buildings in the hills east of San Clemente CA but there is no giant JCR signage on the building, only an 18 inch JCR sticker on the door.

Upon entering the institute, visitors are welcomed into a lobby area filled with posters and giant re-prints of various ads and promotional materials, awards and trophies. Beyond the lobby are several executive office suites, a showroom, boardroom, kitchen and bath area. The inside bathroom at JCR rivals 4-star hotels and nicer than any other we have seen in an off-road shop.

Beyond the interior is the meat of JCR: the shop itself. Two main work bays are dedicated to each of the BAJA champions bike teams A and B and Eric Siraton oversees the entire program even though San Clemente local and 1x plate holder Colton Udall is a full-time shop employee. Colton started off at JCR building bikes and now has Eric Siraton as a mentor and coach.

There is a mezzanine area with selves of every conceivable motorcycle part, all high-end. Tire’s, wheels, sprockets, pipes, and suspension gear line the shelves and, from up here, visitors get a nice view of the work bays. 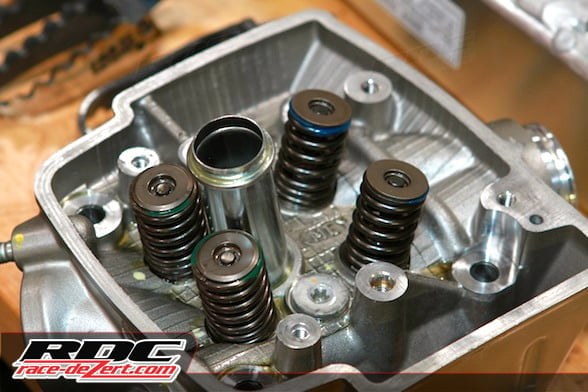 As Siraton and his crew prepare Quinn Cody’s CRF450x for a 14-day battle in South America, it is crunch time at JCR and so much has to be done to prepare Cody’s machine for the world-famous rally. It is Siraton’s first crack at building a DAKAR bike from the ground up and he took a few minutes to share some details with RDC.

RDC: What are the key differences in building a machine for DAKAR vs. BAJA? What are some of the spec differences: weight, HP, etc.?

ES: There are more similarities than differences. Both start with our Baja 1000 chassis and motor configuration. Factory stator and ECU. Varies other part that we use for Baja. Differences are on subframe that becomes a fuel tank and we use 4 gal IMS front tank. About 9 gallons of fuel. We also add all the navigation equipment to the front of the bike. And I custom make a wire harness as well as using one provided from HT Rally Raid. All Dakar specific parts were provided from HT Rally Raid. The bike weights somewhere in the 300-pound range. HP is 55+.

RDC: Quinny rocked DAKAR last year with 9th in his first run and a fractured thumb as early as stage 5, did you have a hand on that bike? Your first time?

ES: Last year I didn’t play a part in Quinn’s rally. So this is my first Dakar. So excited.

RDC: When did you realize that you’d be a pro race mechanic?

ES: I never thought I would be a mechanic. I fell into it because of my brother Marc Behnke. He worked at Precision Concepts and he asked if I wanted to work part-time because I had another job. So after work I would go to the shop and pull suspension off a bike and put it back on. After a little while they needed someone full time so I quit my other job to work there.

RDC: When did you get your first decent break?

ES: Bob Bell owner of Precision Concepts was working with Johnny and building the B team XR 650R for Baja and BITD so I kept on asking to help build the bike and go to Mexico. I got my chance building the bikes and help in the chase in Mexico. With help from Jim Green I learn a lot about detail and looks are everything, because if it looks good chances are you did a good job building the bike. In 2001 I started building both bike for Honda and the story rolls on from there.

RDC: How have you progressed in your career so far? Fast or slow?

ES: I believe that my career moved rapidly. Within a year of joining Precision Concepts I was building race bikes.

RDC: You’re on quite the roll with your bikes having this incredible streak until this past March with the “old branch through the radiator trick” on Kendall’s 1x. Before that, how long has it been since you’ve lost a bike in the middle of a race?

ES: In Baja that would be the first failure I’ve ever had. The only other race that we had a failure in was the 2005 Glen Helen 24hr race and I rebuilt the motor to finish the race.

RDC: Walk us through how you felt and what goes through your mind after losing a bike in the desert? Is it heavy for you, considering your record?

ES: When we DNF in San Felipe I was very disappointed knowing that I have never had a failure in Baja. My first concern was: “Is it a mechanical failure or something else?” So when I found out what happened I was somewhat relieved, nothing could have stopped that issue. My record might have a blemish on it but I will still keep building the best machines for my rider and hopefully keep my reputation moving forward.

RDC: Colton’s got the El Plato 1x and he credited you with lots of thanks for helping him out in 2011. Did you have a pretty big hand on the bike or are you more like a mentor.

ES: Colton and I work closely with each other to make sure his bike is solid. He builds his bike then I take it over after it is tested. So I go back over it and check everything to make sure it is perfect. Colton is a great mechanic in his own right, I just helped him step his game up a little bit.

RDC: Who do you look up to?

RDC: How do you like your shop and what makes it special?

ES: JCR Honda is my home away from home. It is like a family, we are all very close to each other. Each year we try to improve the shop in one way or another, to make it more efficient.

Alas, Siraton is at the helm in the shop and on his way to his first DAKAR, Campbell will ride to right of Robby Gordon and Quinn Cody will attempt to podium in his sophomore rally. When you think of JCR, don’t think of it as another shop. It is an institution.

S
Scotty Breauxman
GO JCR HONDA TEAM DAKAR 2012
SWEET SHOP JCR HONDA
A couple of grinders and a couple of presses? Where is the machine shop part of the machine shop? Looks more like a warehouse. Clean and well organized but there's no machine shop. A little (or alot) too much of a PR and fluff piece for Race-Dezert IMHO.
Yep XR- It was only a joke...sorry you didn't get it...
They have a small machine shop. Its called Raceco. The Campbell's work together and help each other out.
Its good to see Johnny doing well, the dudes a class act and I bet he runs his shop the same way. I've bummed parts from him for my broken bike @ a district 37 race and he's always glad to help.
LOVE IT ALLL !!!!!
Sigan asi, esta bien chinagon su shop.
Simplicity is what wins championships