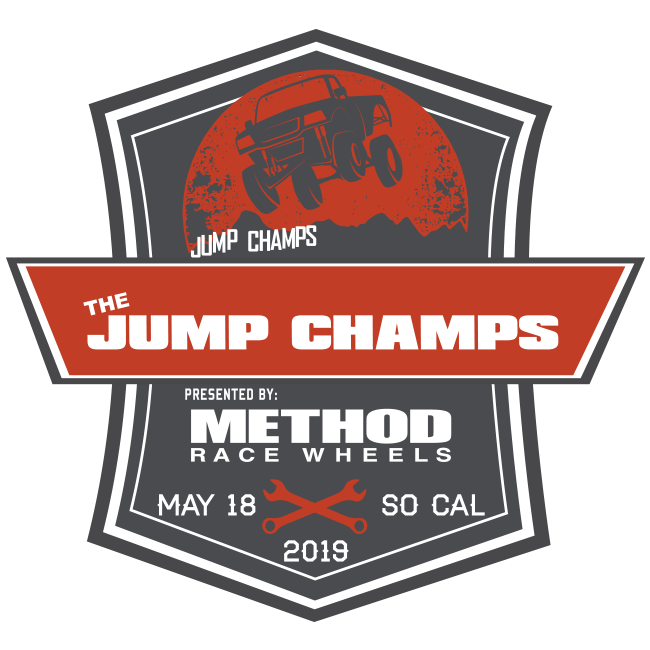 THE JUMP CHAMPS 4.0+
PRESENTED BY METHOD RACE WHEELS WAS MORE THAN BEFORE AND BIGGER THAN EVER

The Jump Champs is proud to wrap up another successful event. It is hard to believe that this is the fourth year since conception with eight events including the Dirt Champs, turned over. The Jump Champs presented By Method Race Wheels definitely proved to be the biggest grassroots event in the off-road industry. We want to thank all the fans that came out, the drivers who brought the show, and all the fans that enjoyed the action-packed weekend. We especially want to recognize the event partners of Method Race Wheels, Heat Wave Visual, Desolate Motorsports, 1Life Trauma Kits, McNeil Racing Fiberglass, K&N Filters, ZROADZ, and Dirt Alliance for making The Jump Champs more than before and bigger than ever.

We are thrilled to feature the event highlights here in the video recap produced by Attain Media.

For 4.0+, we had a full schedule of events with Friday Practice & Friday Night Desert Drags, Saturday Time Trials Racing & Jump Contest and a first time ever Sunday Fun Champs “Track Time”. Jump Champs has evolved from being a single event to being a weekend of offroad action! 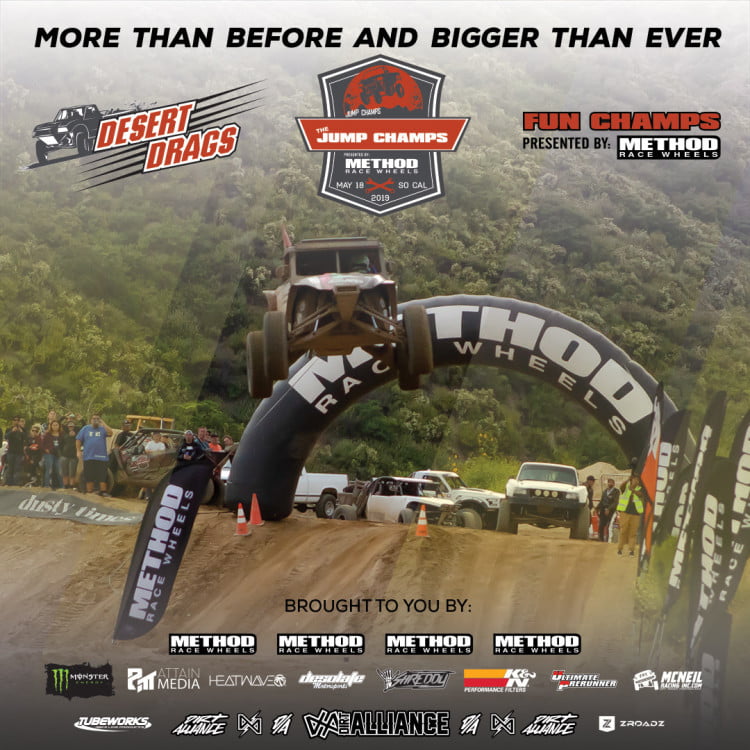 The Desert Drags has become a Jump Champs staple event with each run getting better and more exciting than the last. The wash provides the perfect natural funnel that supercharges the excitement forcing the competition to dive in or step off. The fans lined both sides of the drag course with elevated viewing that only accelerated the excitement. With over 20 drivers lined up with in varying vehicles, the claim to fame landed with Mike Kosareff who won in the Stock Class in a Chevy 1500 and Koby Bechor won the Unlimited class in Polaris RZR 1000.
The Time Trials feature was overhauled and streamlined with a Gran Prix-style, timed format. Each driver was able to do lap after lap without pauses or stop time between drivers. This meant a hot track with constant action and even cars able to chase down and safely pass drivers ahead. 12 classes were featured with 99 drivers; the new arrangement was well received and had the course revving up the onlookers all day from the grandstands.  The best viewing area was the Ultimate PreRunners Preferred Parking and also the Method Race Wheels hospitality trailer where anyone that stopped by was treated to hot dogs and cold beverages. Click here for Time Trials Race Results.

During the Time Trials, the vendor row kept it all flowing. The Heat Wave Show & Shine had 15 prime vehicles parked up front and looking fresh. The Shreddy Shack was slinging gear and apparel. Strategic Race Designs on-site repair kept the trucks rolling after the on-track carnage. The Fab School was on site providing education & demonstration with an awesome Class 1 Desert Buggy Race Car on display.
The day concluded with The Jump Champs Method Race Wheels Jump Contest. In an effort to keep it fresh and keep it real, Jump Champs management moved the Jump Contest over to a new location at Glen Helen – a naturally cut launcher and downhill landing all built into the hillside of the famed motocross facility. The new jump was a big hit for the drivers as they sent it large! Blake Wilkey went for it and claimed the overall with a huge & very high 131-foot jump.
Fun and safety have always been a top priority for The Jump Champs since the beginning. After a critical analysis, valued input from our partners, along with Glen Helen Raceway’s assistance, The Jump Champs set up a dedicated pedestrian-only entrance in conjunction with a more efficient vehicle only entry into the event area. The systems and procedures set in place made it all around safer and we will continue to use this layout and make more improvements as needed. Another highlighting feature was the bright safety uniforms provided by a partnership with 1Life Trauma Kits.

In the end, The Jump Champs delivered another great event. Thank you to every one of the fans, family, and drivers who came out, braved the conditions, and were a part of The Jump Champs Off-Road Action Festival! We will see you in the DIRT!
J
Jon Lebeau
Great event!