The 2019 short course season has come to a close with the Lucas Oil Offroad Racing Series finishing up their year this past weekend in Chandler Arizona. After a long year that started in March, the LOORRS season ended on a bang with the last round of racing determining championships and the challenge cup leaving racers with a bigger bank account. 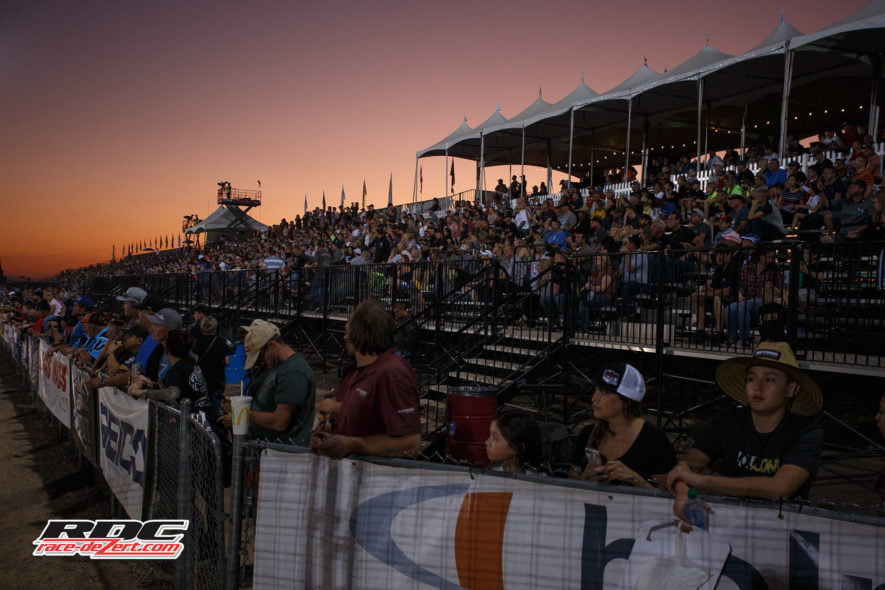 With the exception of the Pro 4 class where Kyle Leduc just needed to take the green flag to secure the championship, all other class championships would all come down to the last race of the year. 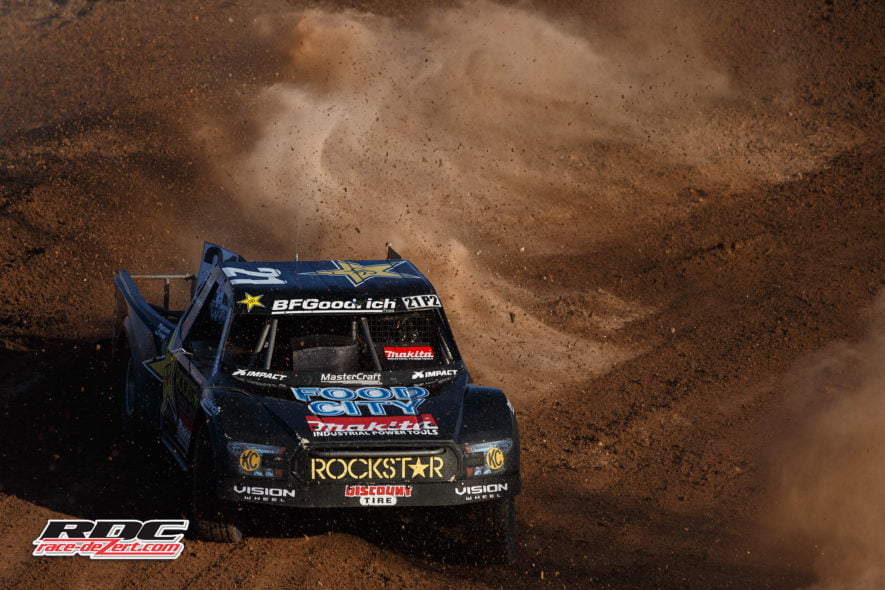 In Pro 2 the championship was between Rodrigo Ampudia who was leading over Jerett Brooks. Ampudia had a small leading going into the last round and after qualifying better on Friday Brooks shrunk the point distance even more. Going into the race Brooks would have to finish ahead of Ampudia to secure the championship and that is exactly what he did winning the race while Ampudia finished in fourth. With that gap Brooks won his first championship in Pro 2, as well as also winning driver of the year the next day at the awards banquet. 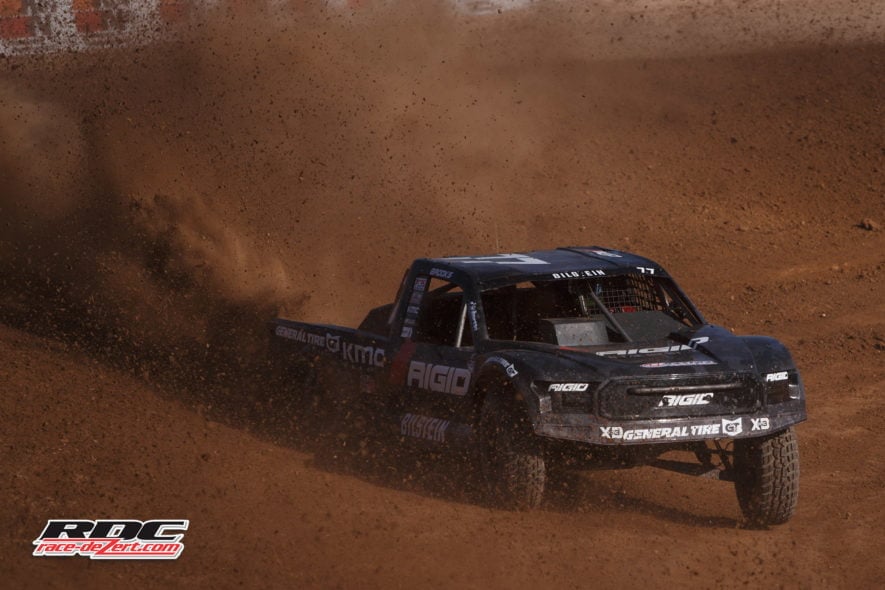 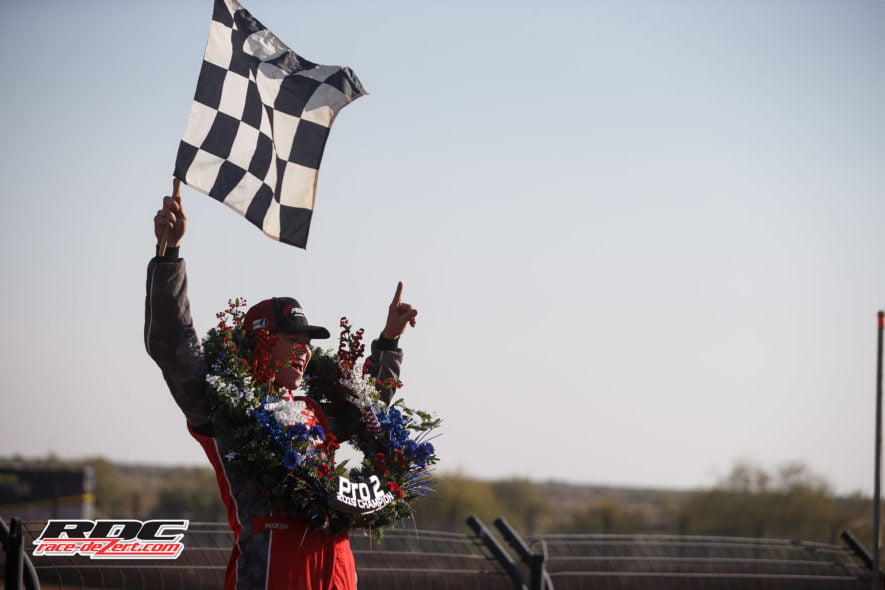 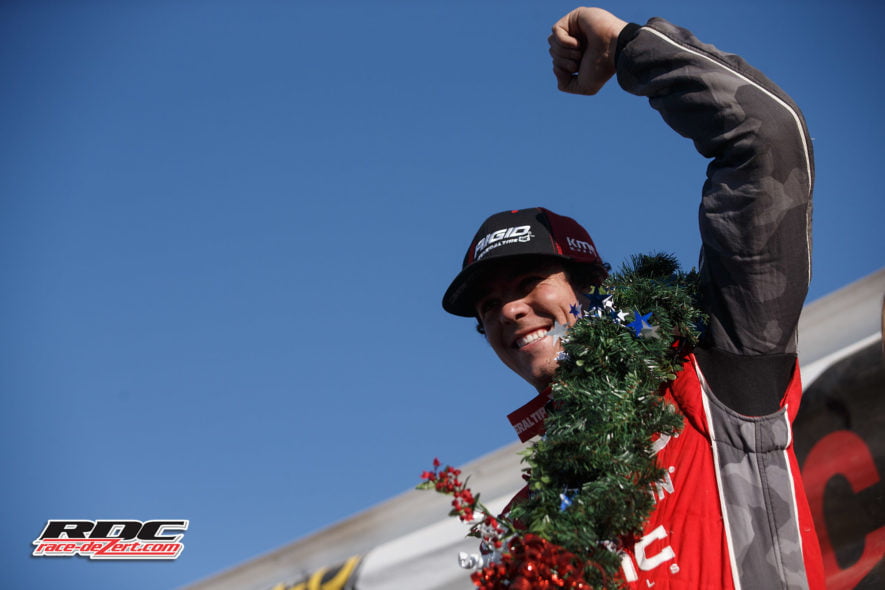 As we said earlier Kyle Leduc had a large enough lead going into the weekend that he just needed to take the green flag to win his sixth Pro 4 championship. He did just that and for the first part of the race played it safe letting the pack pass him to save his truck for the big cup race later that night. Leduc followed closely behind while Doug Mittag and RJ Anderson battled for the lead, however halfway during the race the lead pack all got tangled with each other and Leduc avoided the chaos and moved into the lead. He then turned it up taking the checkered flag first not only getting the first place trophy but also adding to his collection of championships. 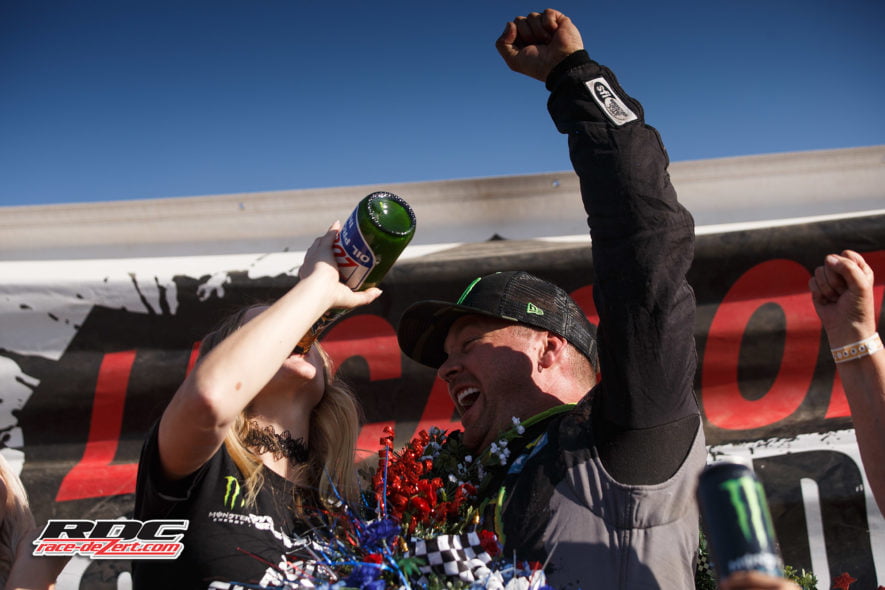 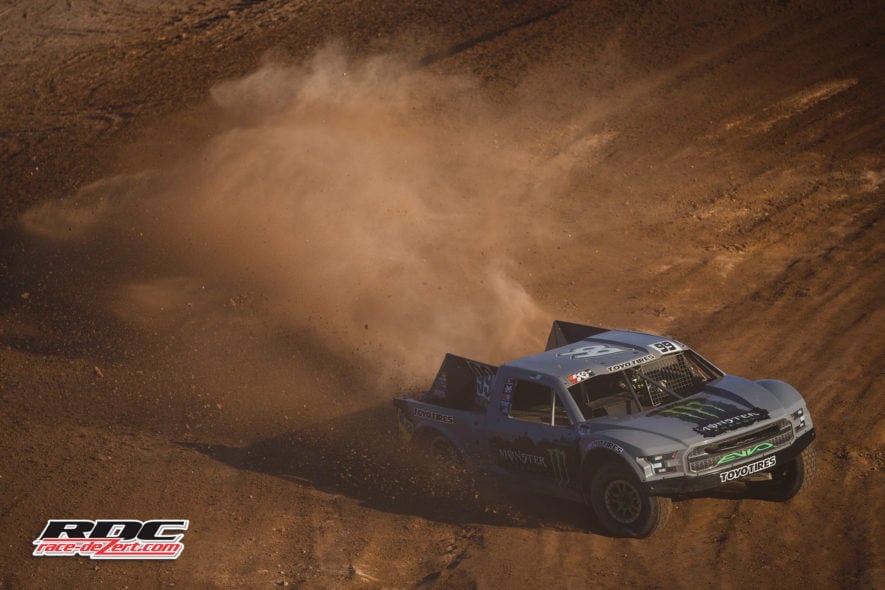 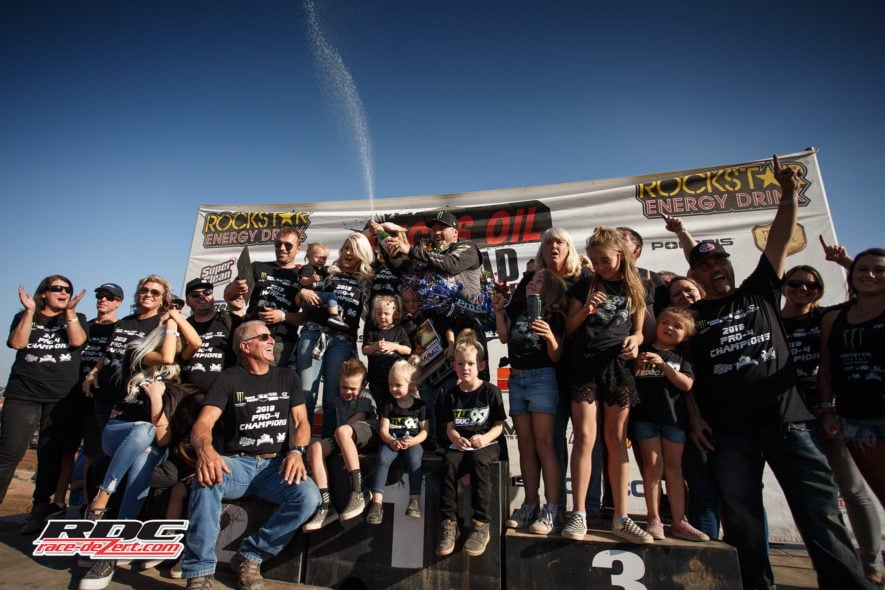 Prolite was also a close race with defending champion Ryan Beat leading over Mickey Thomas, with Thomas closing the gap by two points after qualifying. In order for Beat to win back to back championships he would need to finish the race and within a few spots behind Thomas. Beat has always been a very consistent and strategic driver and knew exactly what he had to do to win the championship. Thomas did what he had to do and won the race but Beat won the war has he played it safe and didn’t take any unnecessary risks finishing in fourth. 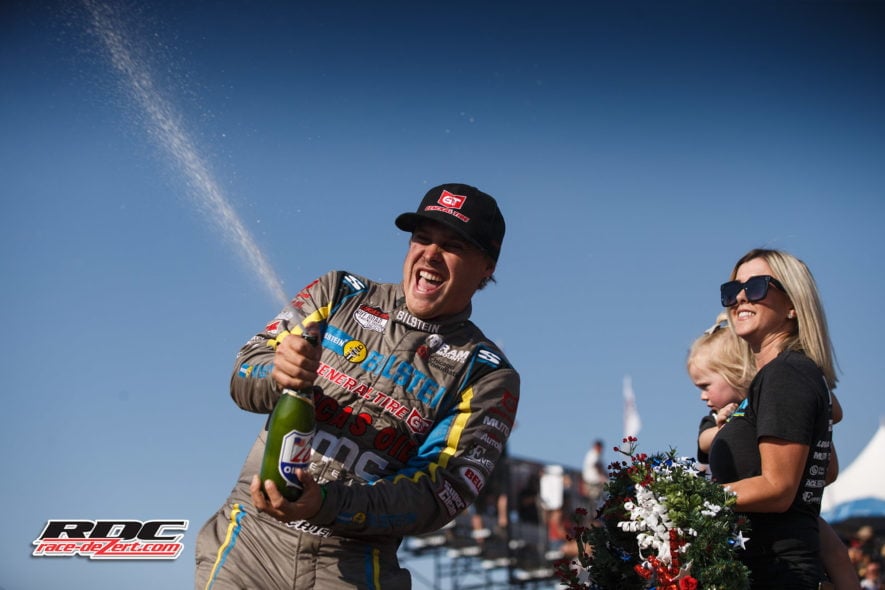 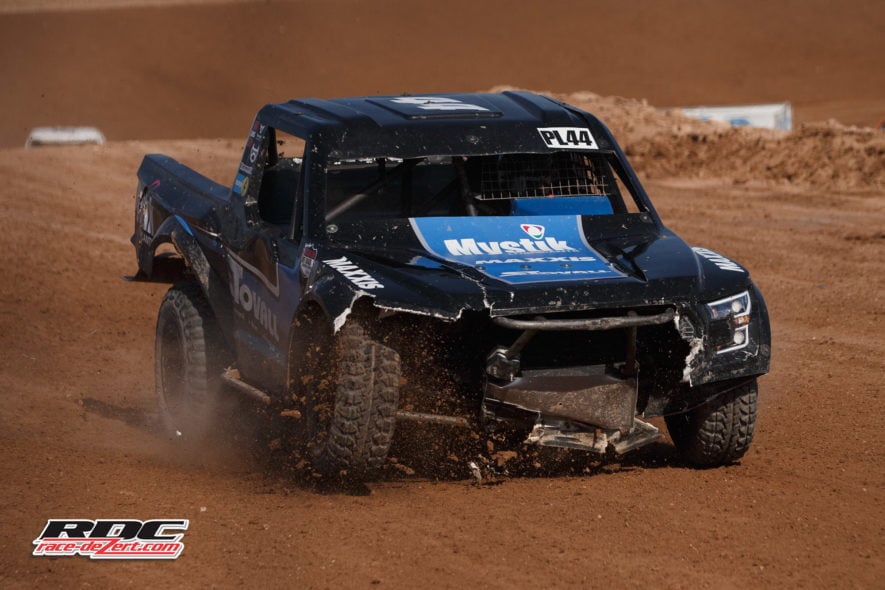 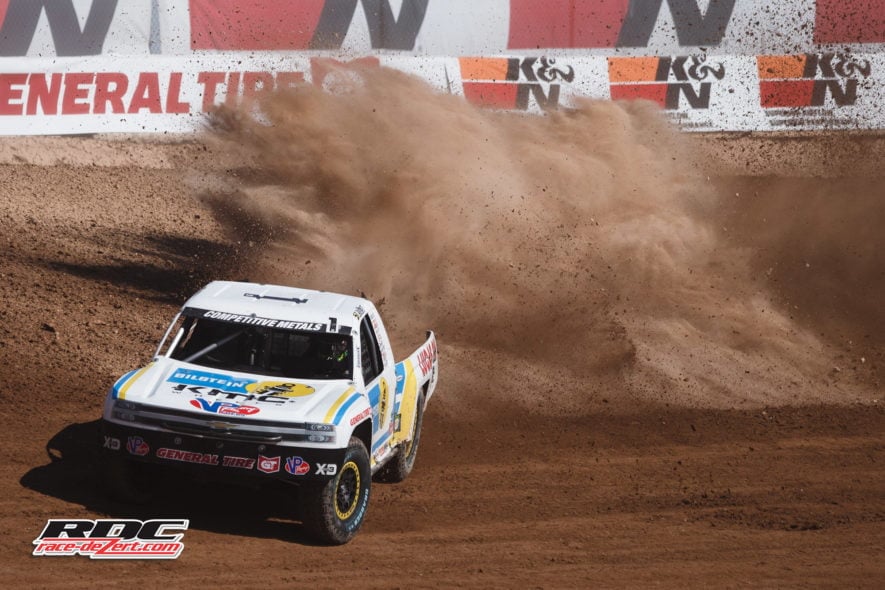 Pro Buggy had arguably the most exciting finish to the season in a whirlwind race that had the championship change hands multiple times. Going into the weekend Elliot Watson and Chris Nunes were tied in points, but Nunes took the lead after qualifying a spot ahead giving him a one point lead before the race. With only a point gap that meant whoever finished in front of the other driver would win the championship.

The race started off with them going back and forth with eventually Nunes settling in front of Watson. After a restart during the middle of the race Watson and Nunes went side by side into turn one and after some contact sent Watson into the wall causing him to crash. The LOORRS safety crew got him rolled back over and with the car not having any issues Watson caught back up with the field on the yellow flag. After crashing and now starting in the back it seemed as if the championship was lost but Watson showed you never give up. At the green flag he got a great jump and immediately got around a few racers, and lap by lap starting getting closer to Nunes eventually getting right behind him again. On another restart the two battled once again and on the last lap going into turn three Nunes attempted to block Watson with more contact behind made that had Watson end up on Nunes roof and eventually getting on two wheels almost rolling again. 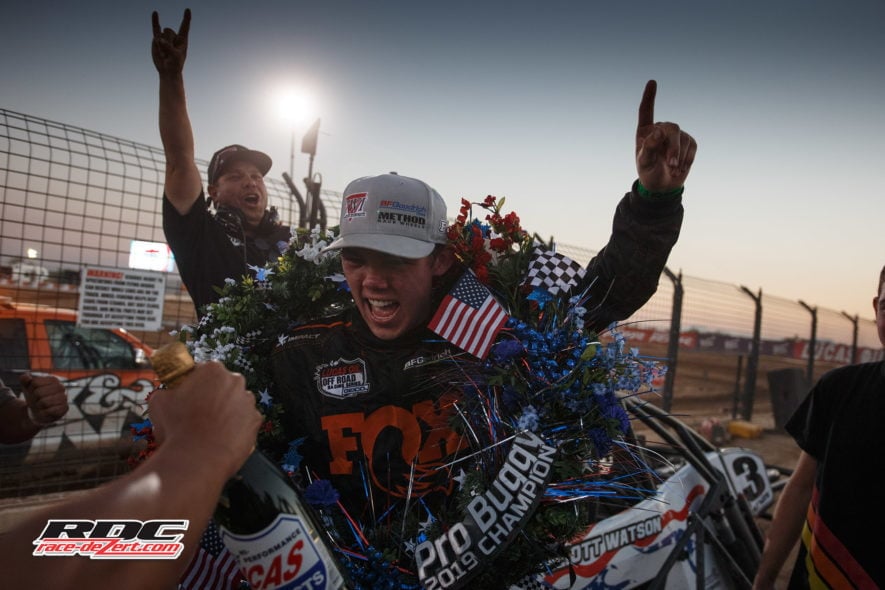 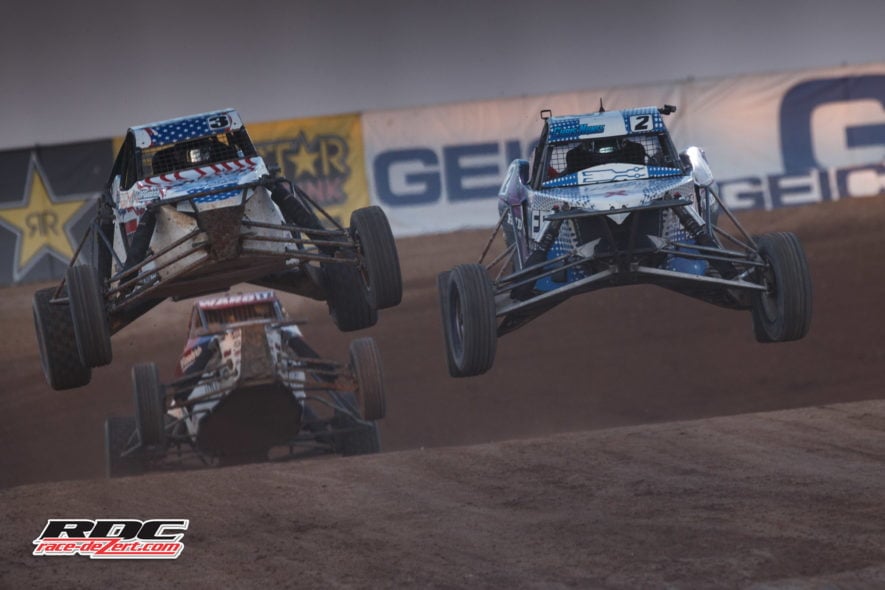 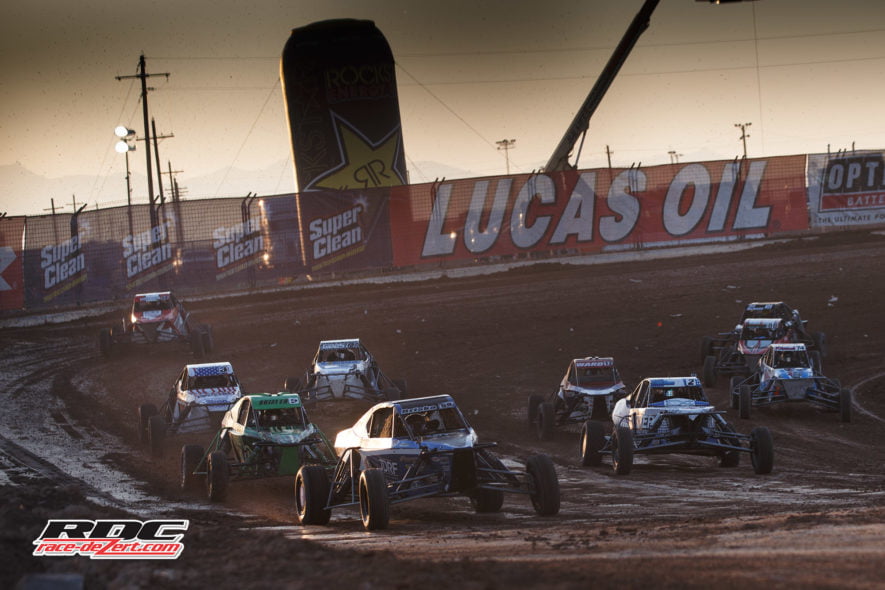 Watson regained control and at the same time Nunes spun out on the next turn letting Watson dive under and finish third in the race and ahead of Nunes giving him the championship after finishing second in points the two years prior.

The Challenge Cup also showed some great racing that had three groups. The Pro 2 410’s, “Regular” Pro 2, and finally Pro 4 who looked to hunt them down. With 18 trucks on the track carnage and some hard battles were sure to come and the race didn’t disappoint. To win the cup race you need to charge hard and take chances and with $30,000 on the line you take some extra chances you may not of during a normal race. 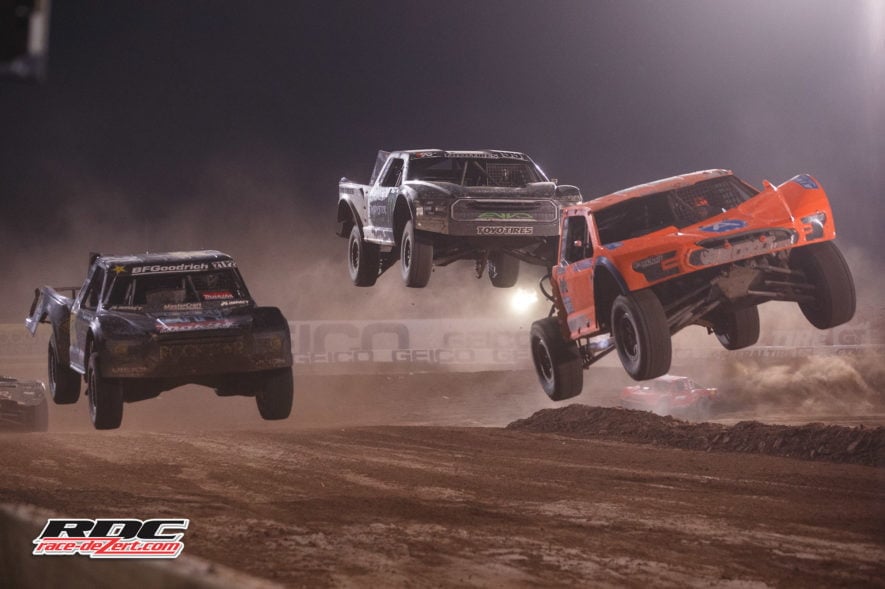 Andrew Carlson who came out from the midwest lead most of the race in his 410 Pro 2 but was being hunted down lap after lap. The biggest factor in the cup races are the gaps that are given between each group, and in most cases LOORRS officials have been pretty good in getting it down to the last few laps where the groups are intertwined and mixed in with each other. 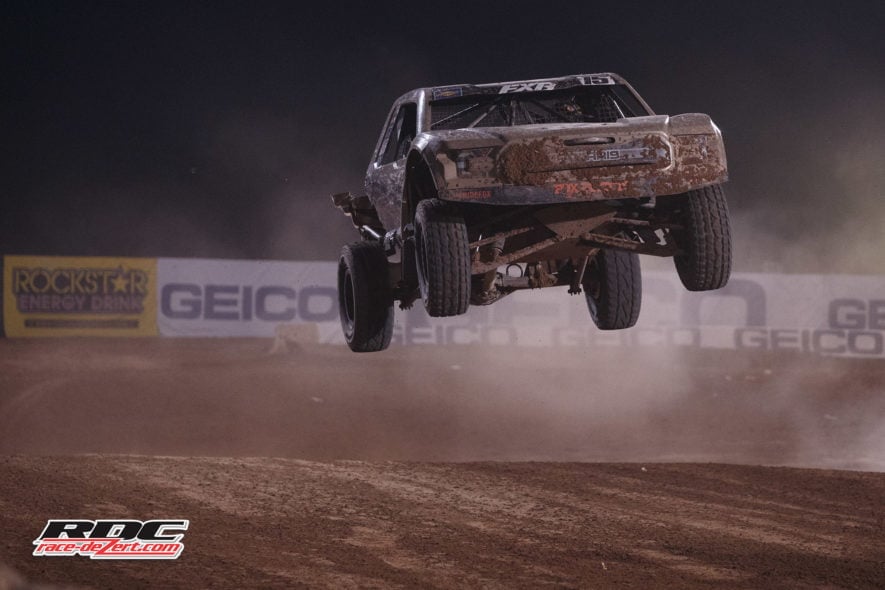 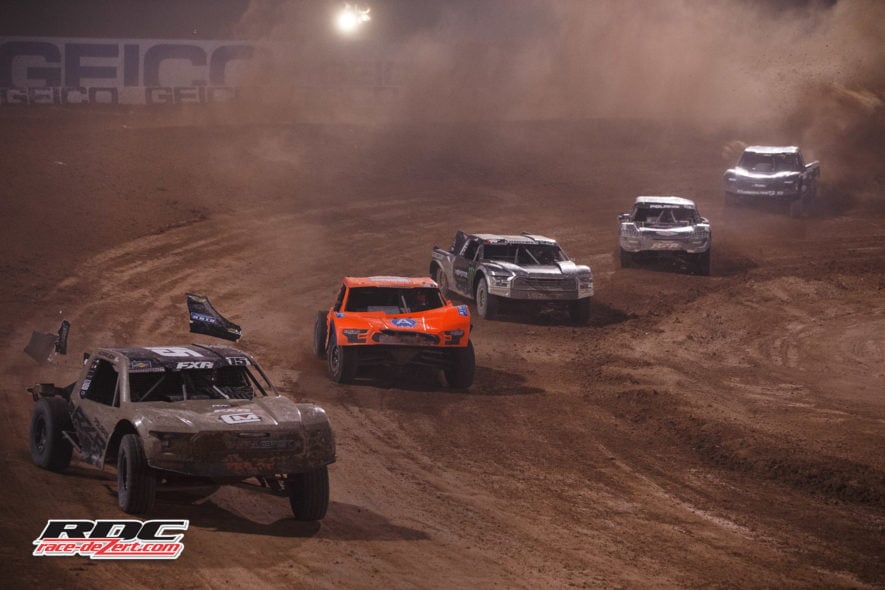 Brooks who was coming off winning the Pro 2 race earlier in the day caught up to the 410’s pretty quickly but was never able to catch Carlson before the Pro 4’s got into the mix. Once a Pro 4 catches a Pro 2 there just is no way they can pass them back with the Pro 4’s having over a 2 second lead per lap. Adrian Cenni, Kyle Leduc and RJ Anderson were charging hard behind Carlson passing all the Pro 2’s together as the laps whined down. Eventually they all got around Carlson so now it was a battle to see which Pro 4 would take home the cash. 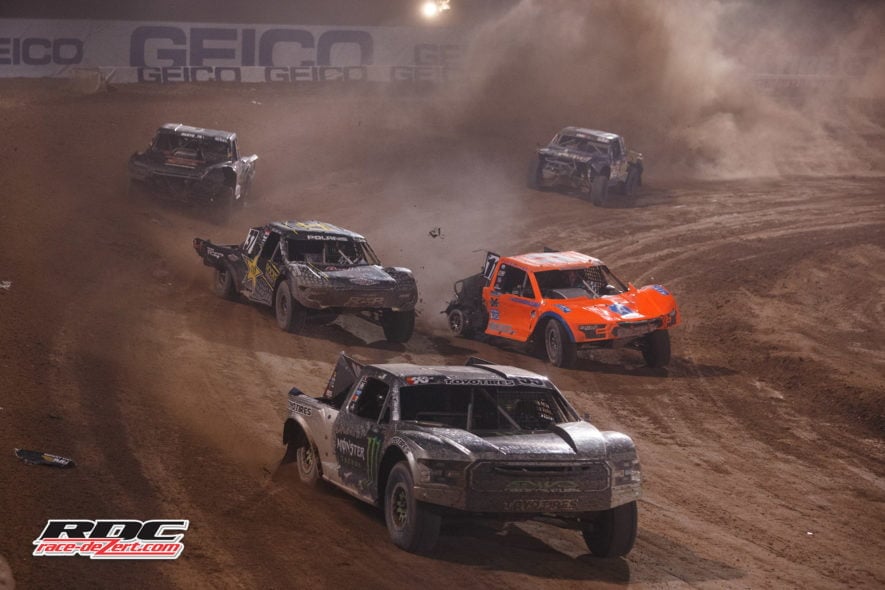 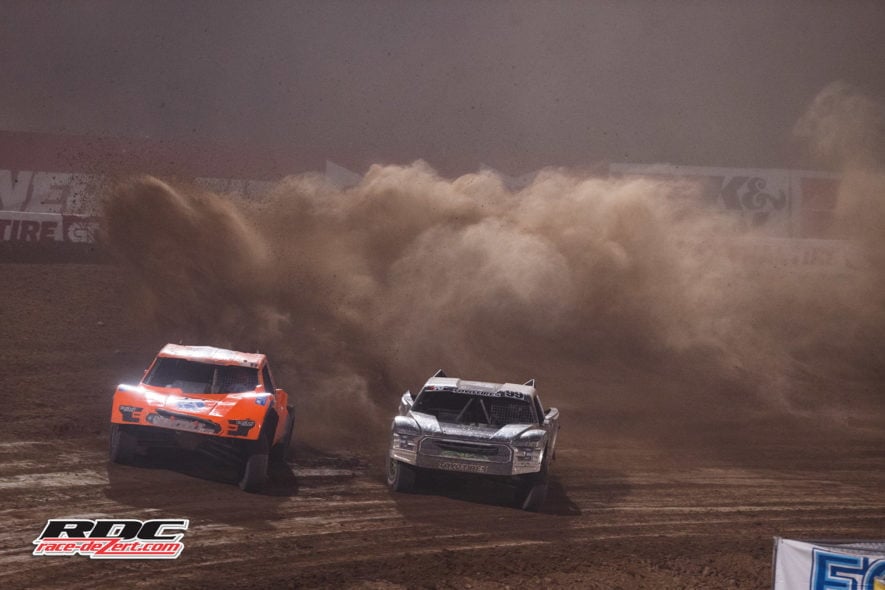 As the laps ticked off Cenni seemed to be able to hold of Leduc and RJ but with a few laps to go Leduc was able to slide down below Leduc in the last corner. Cenni also looked to get a rear flat tire which let Anderson and Carlson by as well. With only a few laps to go it would take a mistake by Leduc for Anderson to get by and that doesn’t happen often. As the checkered flag was waved it was Leduc who would cross the line first winning the Lucas Oil Challenge Cup race becoming $30,000 richer, and winning his fifth Challenge Cup. Also worth noting is that with the two wins on Saturday he now has 99 wins in his short course career. 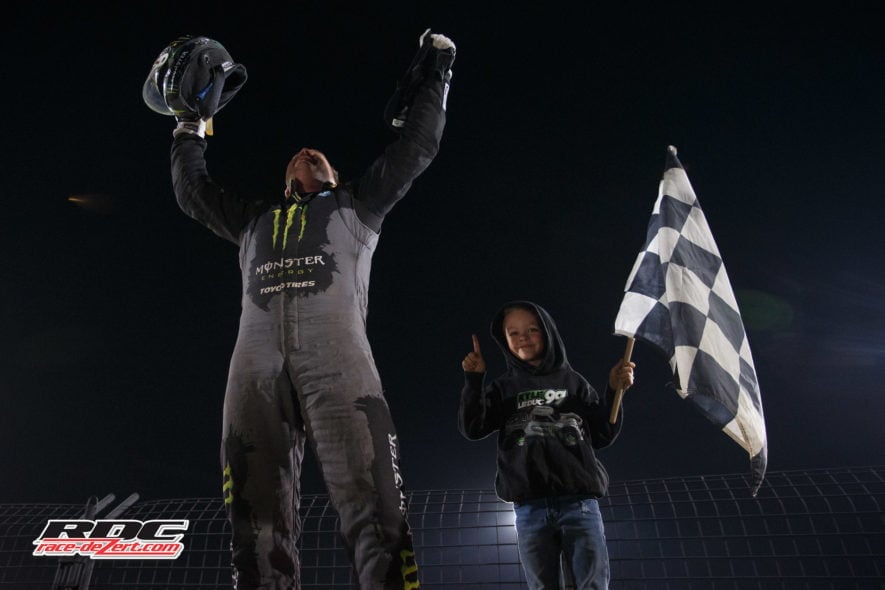 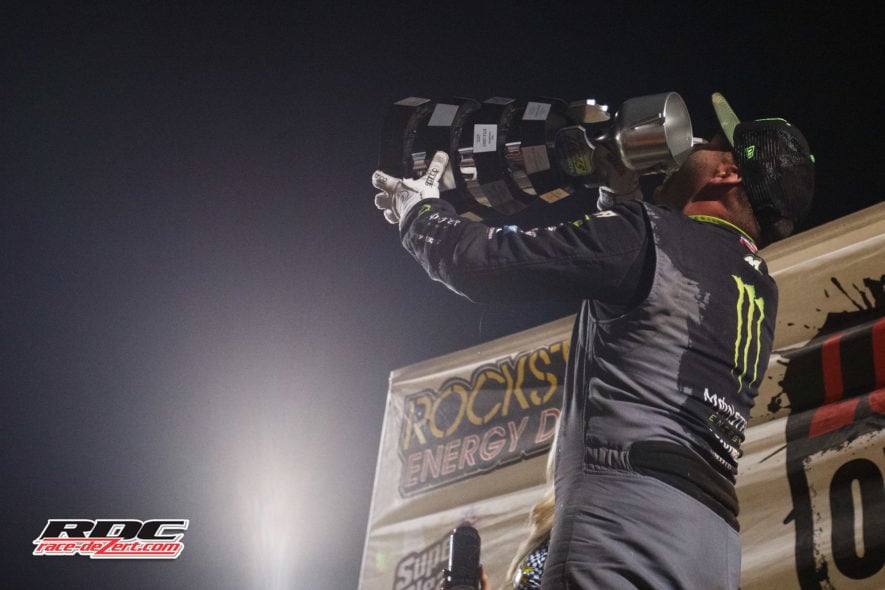 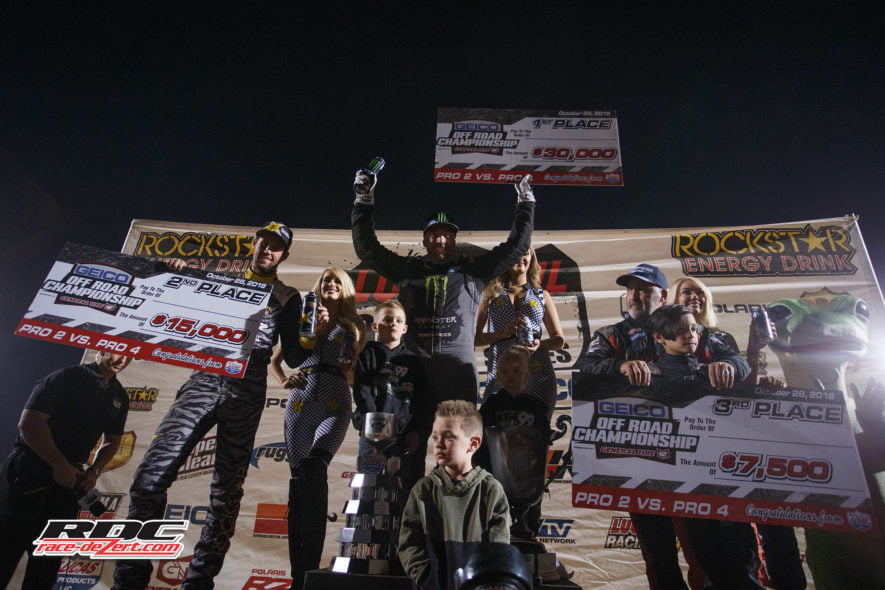