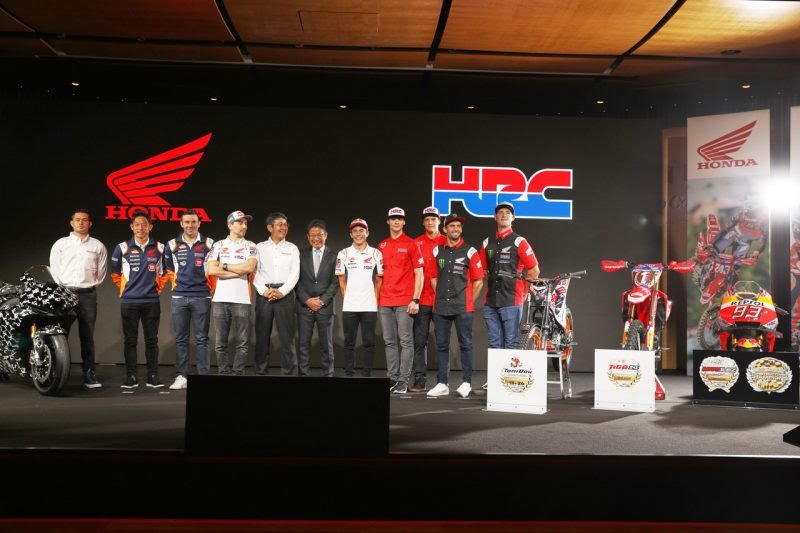 The new HRC teams for 2020 have been revealed in the auditorium of the EICMA motorcycle show in Milan, with Monster Energy Honda Team showing off their most recent signing.

The Stella Polare Auditorium at Milan’s EICMA hosted the presentation of the new 2020 HRC line-ups. In the audience, leading journalists from the motorcycle world gave a rapturous greeting to the announcement of next season’s squads for the various disciplines in which HRC’s riders will officially compete: MotoGP, Superbike, Motocross, Trial and Rally. The main protagonists at the event were accompanied on the rostrum by Noriake Abe, Chief Officer for Motorcycle Operations at Honda Motor Co. and Shigeki Nomura, HRC President.

American Ricky Brabec, Argentinian Kevin Benavides, Spanish Joan Barreda, Chilean José Ignacio Cornejo and South African Aaron Maré will be the five Honda HRC riders who line up for the 2020 Dakar Rally on its maiden residence in the Middle East.

Aaron Maré, new team member
Monster Energy Honda Team has incorporated South African rider Aaron Maré into the ranks who is set to make his official 2020 Dakar Rally debut at the event in Saudi Arabia from January 5-17. Maré, with a motocross background, has previously participated with the team in a supporting role in the Cross-Country Rallies events in Chile and Morocco, is currently involved in private training in the build-up to the 2020 Dakar. The recent achievements of Aaron Maré include first place clinched at the Dubai International Baja and the UAE Baja Championship, as well as victory in the Desert Storm Rally.

Former rider Ruben Faria as been appointed as Monster Energy Honda Team General Manager. Faria was the Sporting Manager of the Team in the last Dakar.

At the EICMA show, Honda will exhibit the team’s competition bike, the CRF450 RALLY, set to compete in the forthcoming Dakar Rally. It can be found on the Honda stand located in Pavilion 22, Stand O 48. The EICMA Motorcycle Show will be open to the public from November 7-10.