They say people’s personalities can change over night, can the same be said for drivers? With the Lucas Oil Offroad Racing Series first trip to Lake Elsinore this year for Round 3 & 4 of racing, brought the first of six night races to the circuit. Coming off a relatively calm race weekend in Arizona last month, no one expected to see all the carnage in tonight’s races. 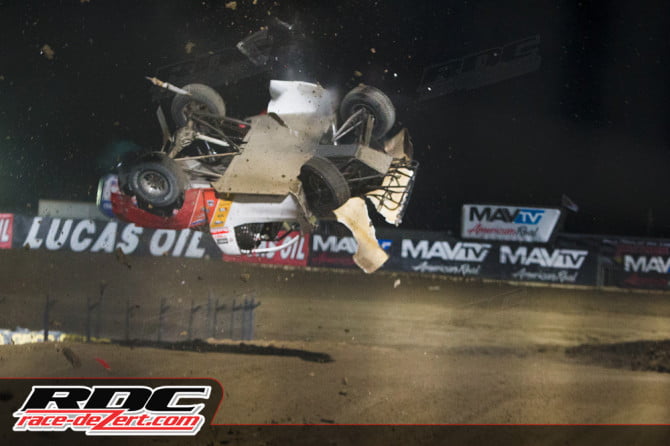 Following suite to what LOORRS has been doing in Las Vegas the past few years, Lake Elsinore is now a night race and is a Friday / Saturday event hoping to pull in more spectators who otherwise wouldn’t come to a race on a Sunday with work the next day. While the seats finally started to fill up come opening ceremonies, it still remains to be seen if fans will want to come to a race after a work night, or just skip it and wait till Saturday night. 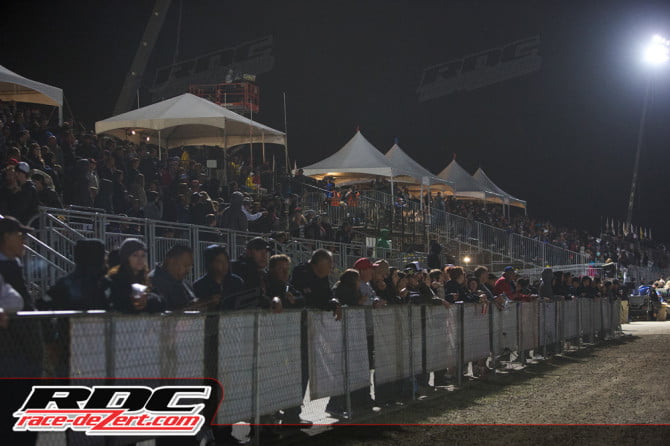 Right off the bat the Pro 2 race gave the fans all the action they could handle with Travis Pastrana wrecking his truck off the start after nosing in on the first jump. Pastrana was taken off the track in an ambulance but teammates said he’s just a little banged up. Unfortunately, the truck isn’t looking so hot either and neither will be in Round 4’s race. 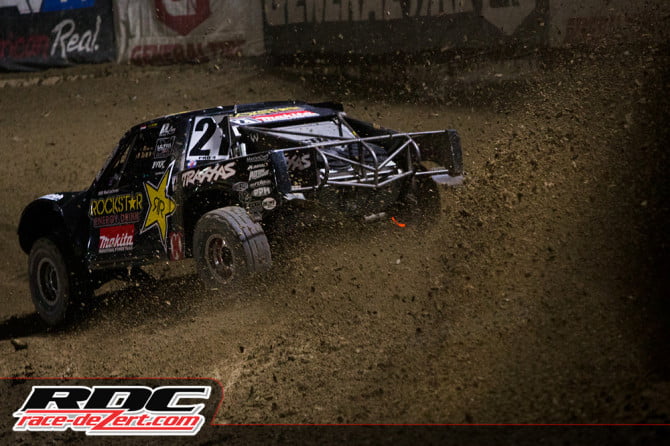 After the course was cleared and the race restarted, Brian Deegan took the lead and held on strong. Renezeder, McGrath, Woods, Adler and Menzies were all battling back and forth trying to put heat on The General. It’s rare that a short course race goes without any cautions and that is exactly what Deegan got as another big crash by Jeff Seifert over the big table top called a stop in the action and let the race bunch up again. Deegan would still hold on to his lead though with Robby Woods (sporting a new corporate sponsor Carlyle by Napa) grabbing a second place podium and General Tire teammate Carl Renezeder taking third. 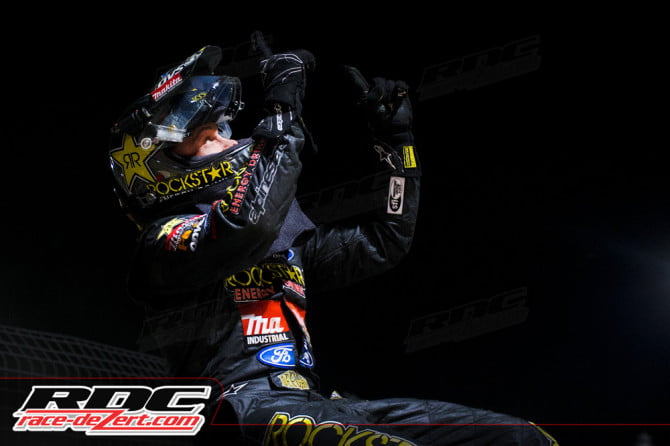 The ProLite race was able to escape any bad crashes but there was still plenty of battles and fender swapping. Like the Pro 2 race Deegan would take an early lead before giving it up to Bradley Morris. From there Morris let the drivers behind him slow each other down as each lap he gained more and more time. Deegan, Sheldon Creed, Casey Currie, RJ Anderson, Justin “Bean” Smith, and Jimmmy Fishback all held tight with one another behind Morris. The group would swap positions many times the last few laps but ultimately Sheldon Creed would take second place and Casey Currie would return to the podium with a third. 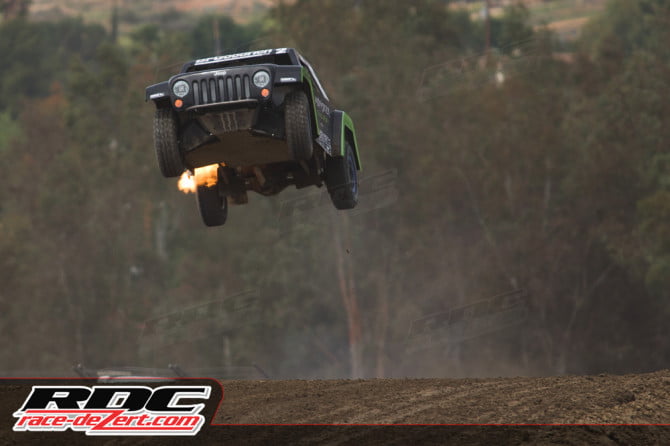 The big news of the night was the big crash of Eric Barron in the Pro 4 race. Leading the entire race and with Kyle Leduc hot on his tail, crossing the finish line on their 11th lap, Barron came too close to the dirt barrier clipping it, causing it to put the truck into the air landing on driver side door and due to the high speed it put Barron’s truck into a violent snap roll. After 6 complete rolls and about 200′ of distance the truck finally came to a stop on all fours, but as soon as it landed the engine compartment caught on fire. What was a small fire at first immediately turned into a raging fire fueled by gasoline coming from the fuel pump. The Lucas Oil Safety Team was quick on the scene and got Barron out of the truck before he suffered any burns thankfully, but because of the nature of the fire it took a while to get it extinguished. Barron was up and awake but was taken to the hospital to be further checked out as he was banged up pretty good and may have lost consciousness. 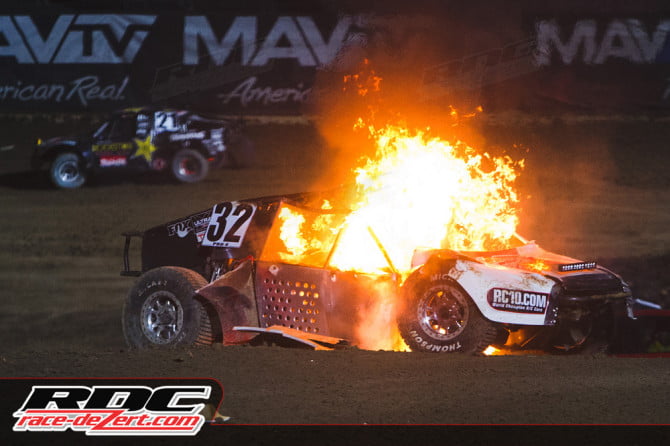 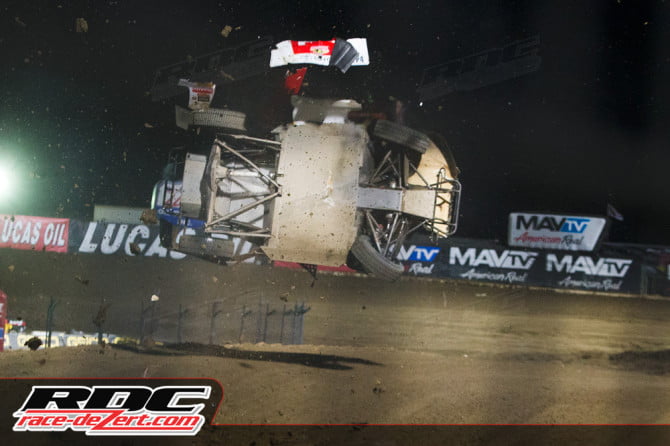 When the track was cleared and the race restarted, the new leader Kyle Leduc took charge and brought home another win to add to his points total. Rob MacCachren took second and Greg Adler rounded out the top three. 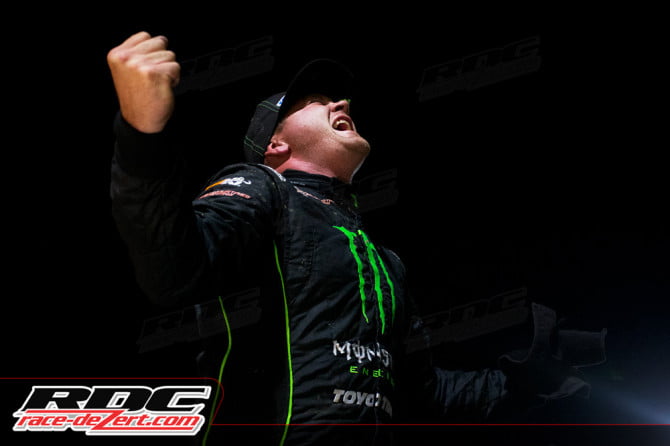