The Rallye du Maroc hauls out! Riders satisfied with the prologue stage

Today’s eleven-kilometre Super Special in Zagora produced an excellent outcome for the riders of the Monster Energy Honda Team, who all finished together, the first of whom came home in 20th position. Tomorrow the rally is set to enter the dunes of Erg Chegaga.

The riders crossed the finish line, led by Ricky Brabec in 20th position, with Joan Barreda, José Ignacio Cornejo and Pablo Quintanilla following closely behind with very similar times. These should prove to be fine starting positions for tomorrow’s event.

The first stage, including the special stage 1B, will enter one of the most deserted areas in Morocco: the Erg Chegaga, home of the Iriki Lake and the Draa River. Locals describe the dunes of the Chegaga as “waves of sand”. The stage will feature a total of 441 kilometres, including 288.24 kilometres against the clock and some 153 kilometres of liaison section. 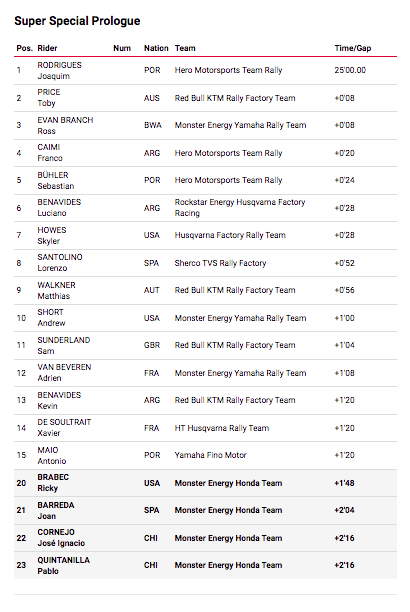