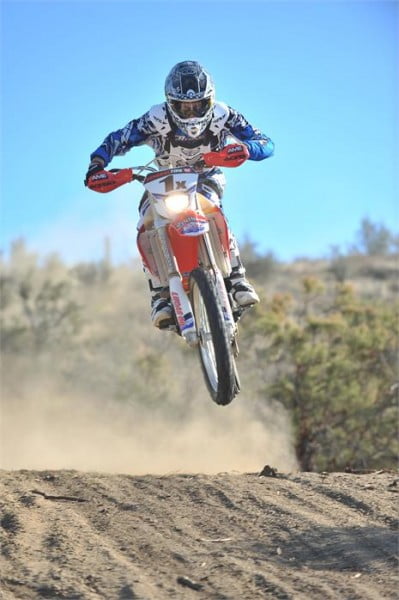 The much hyped and anticipated start of the 2012 SCORE Baja race season did not disappoint. With a shuffling of the rider deck and the stiffest competition in recent memory, the game of racing Baja has changed for 2012. The San Felipe 250 was in a word “crazy” with the 4 top teams crashing during the race. 3 riders from 2 teams cartwheeled within the first 30 miles and the 3rd rider crashing around mile 65. Everyone knows that San Felipe is a tough race on rider and machine but no one could have predicted this. JCR seemed to escape the major hazards from the first 30 miles and through the infamous Matomi wash unscathed and were running in first place. San Felipe would hold no prisoners this time however as Timmy Weigand experienced a high speed crash and found himself on the ground surrounded by plumes of dust. Timmy was flown to San Diego for evaluation purposes. He is home now, doing fine with no broken bones or serious injuries, ready to race after a few days of rest thanks in large to his Fly Racing protective gear, experience and fitness. The race win slipped away but thanks to the strength of the JCR program and pit personnel the team still held 2nd place. The plan was to play the 3 aces with Colton taking the start to race mile 30 handing the bike to David Kamo who rode to race mile 106 handing the bike to Timmy Weigand with Colton Udall getting back on the bike back at race mile 168 and taking it to the finish.

“It was a big weekend. The first Baja race for the 2012 Honda CRF450X and the first race for Colton Udall as 1X rider of record. He proved to everyone he is the guy to beat. David Kamo got on thru some of the toughest sections and rode a perfect race. Timmy was riding great and had moved the team into the lead before crashing. Timmy is as tough as they come and I am thankful for his safety and the quick work of the team safety protocols in action. It’s a bummer to not get the win but it was an exciting race and I cant wait for the 500.” — Johnny Campbell

This year’s 248.64-mile race course utilized two washes that have never before been used for racing – Cuevitas and Amarillas. The Cuevitas Wash replaced the Three Poles to Borrego section of previous courses. The course ran in a counter-clockwise direction starting and finishing at the landmark San Felipe arches. For the first time, the second half of the race course will also include five infamous washes – Matomi, Azufre, Huatamote and Chanate, along with Amarillas – before heading to the finish line. The course included four physical checkpoints as well as 51 virtual checkpoints to help insure the safety and the integrity of the challenging race course.