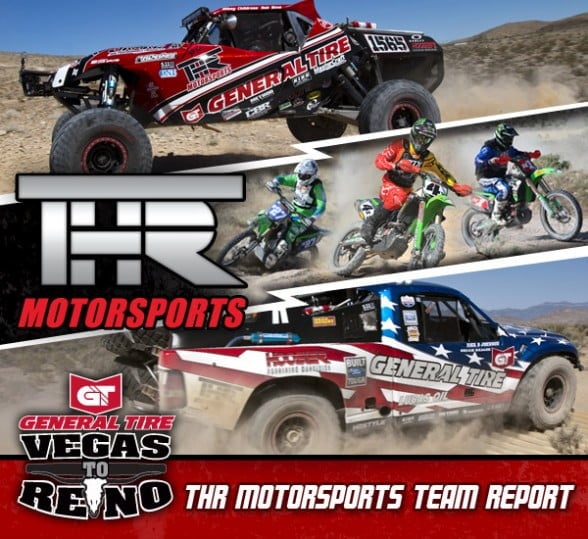 The THR Motorsports / Monster Energy / Precision Concepts Kawasaki team’s dream season continued on a winning note when its two Open Pro squads went 1-4 at the General Tire Vegas-to-Reno, the next-to-last round in Best in the Desert’s five-race American Off-Road Racing Series. Robby Bell and David Pearson proved to be the fastest racers overall in the 534-mile jaunt from Beatty to Dayton while Ricky Brabec and Ty Renshaw, who led for a while, settled for a fine fourth. 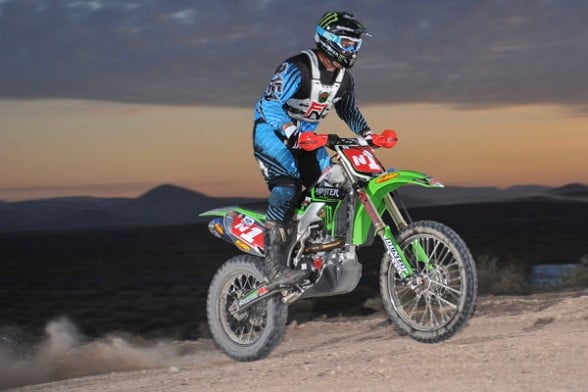 Bell and Pearson enjoyed clean air for a while, having drawn the first starting position. Unfortunately, they suddenly found themselves behind when Bell lost the course during his first stint.

“Yeah, it was pretty eventful, to say the least,” Bell conceded.

Pearson explained how such a thing could happen: “A couple cows had knocked down the course markings about 20 miles before pit four, and Robby blew the corner and he got lost for quite a while.

“We had a two-and-a-half-minute lead at pit three and when I saw him at pit four, he was, like, seven minutes behind Ty–they just got lost out there.”

Renshaw and Brabec did indeed lead for a few miles, but they had not only their THR Motorsports /Monster Energy /Precision Concepts KX450F-mounted teammates to contend with but the Max Eddy, Jr. / Mark Samuels and Nick Burson / Justin Morrow teams. With a new $10,000 winner-take-all bonus compliments of THR Motorsports, Hoosier Precision Machining, Monster Energy, GPR Stabilizer and Best In The Desert up for grabs, everyone in the lead pack seemed extra motivated. 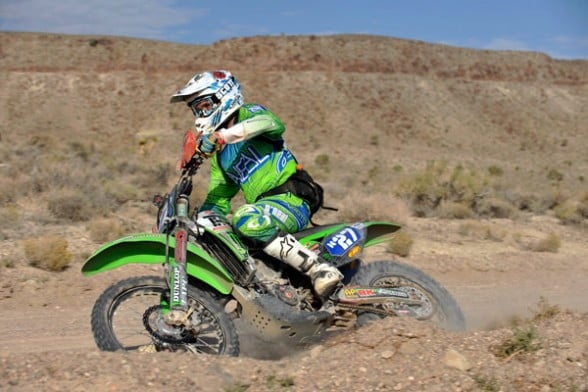 But Bell and Pearson would not be denied and rallied back. “By pit 11, we were in the lead, probably, and from there we pulled quite a lead to the finish,” Bell said.

So, Bell and Pearson continued their roll of success of late (hare & hound for Pearson, Baja 500 for the two, plus WORCS podiums for Bell) to overall Vegas to Reno, the only team to break nine hours with their time of eight hours, 59 minutes and 17 seconds. That beat runners-up Burson/Morrow by almost seven minutes with Eddy/Samuels a further nine minutes back in third, less than a minute ahead of Brabec and Renshaw. (Bell and Pearson edged the first four-wheeled finisher by just over two minutes.)

With Vegas to Reno paying double points, Bell and Pearson now have a commanding lead and basically just need to show up to the Transwest Ford Henderson 250 in December to successfully defend their N1 plate.

The THR, General Tire, Lucas Oil, Trick Truck #71 team of Driver Rick D Johnson and co-driver Brian Sallee had a flawless race. They wisely paced themselves in the dust driving fast enough to stay up front without damaging the truck or losing time to flat tires. “We had a great race,” said Rick, “We never got out of the truck. We did two fuel stops and changed the rears once in the pits. We knew if we kept pushing hard without any mistakes, we would have a good finish. We went through three different rainstorms in the mountains. The rain cooled us down and made the air smell great. We were having such a trouble free run we actually enjoyed it. Our plan was to have enough truck in the end to go for the win but we were held up in traffic near the finish. We’re pleased with the second place finish in the Trick Truck class, 5th overall and look forward to the Bluewater Desert Challenge.” 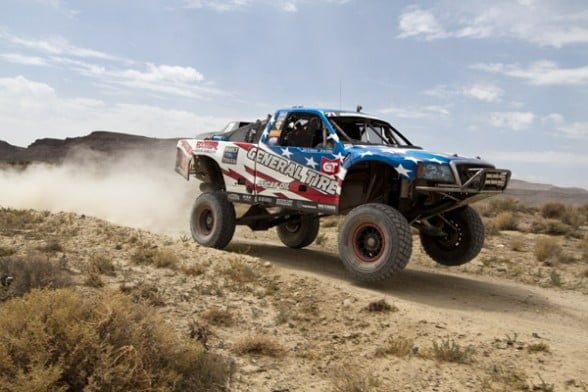 In the unlimited, open wheeled class, Mikey Childress and the THR, General Tire team was poised for a great result. Not content with their second place position in the championship series, the team made changes to the car prior to the race. To increase their speed and handling in the rough, 37 inch tall General Grabber tires were fitted in place of the 35’s. The transaxle gearing was revised to match the taller tires and the King shocks were tuned to work with the new set-up. The changes resulted in a 5-7% increase in top speed, a huge advantage in a long race like Vegas to Reno. 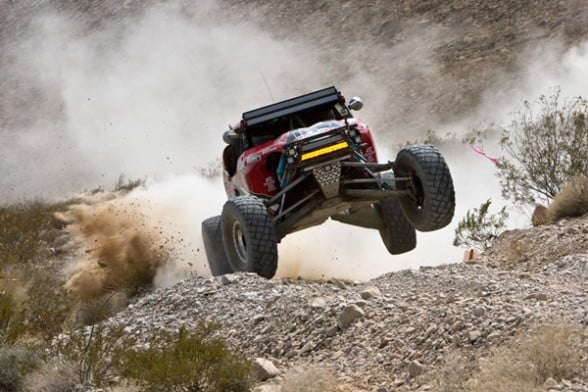 On raceday, the improvements were evident and everything was going to plan. Shortly after Mikey pulled into pit 12, tragedy struck. The valve on the fuel hose stuck open spilling fuel onto the cooling fans. The vaporized fuel on the hot engine ignited, engulfing the car and fueler Klint in flames. The flames were quickly extinguished and thankfully, Klint was fine; he was wearing a helmet and fire retardant clothing. The crew wasted no time replacing the damaged wiring and burnt fans to get the car running again. Many teams would not have recovered from such a catastrophic engine fire but the THR Motorsports crew is top notch. Time was lost but they refused to give up. Their heroic effort resulted in a 19th place finish in class, 40th overall. Looking on the bright side, the crew was put through a serious test and came through with flying colors. The ordeal has made them stronger and more confident than ever. They will be more determined than ever when they line up to race in Parker, AZ for the BITD Bluewater Desert Challenge being held October 12th-14th. For more information visit www.bitd.com 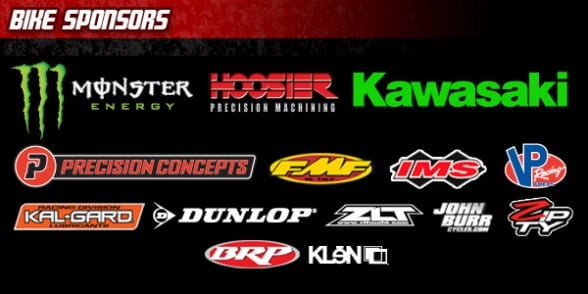