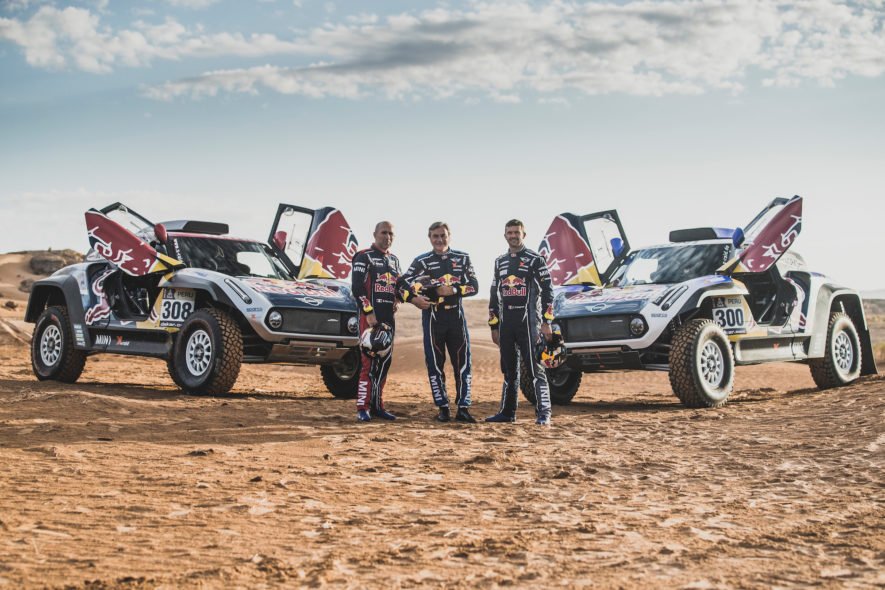 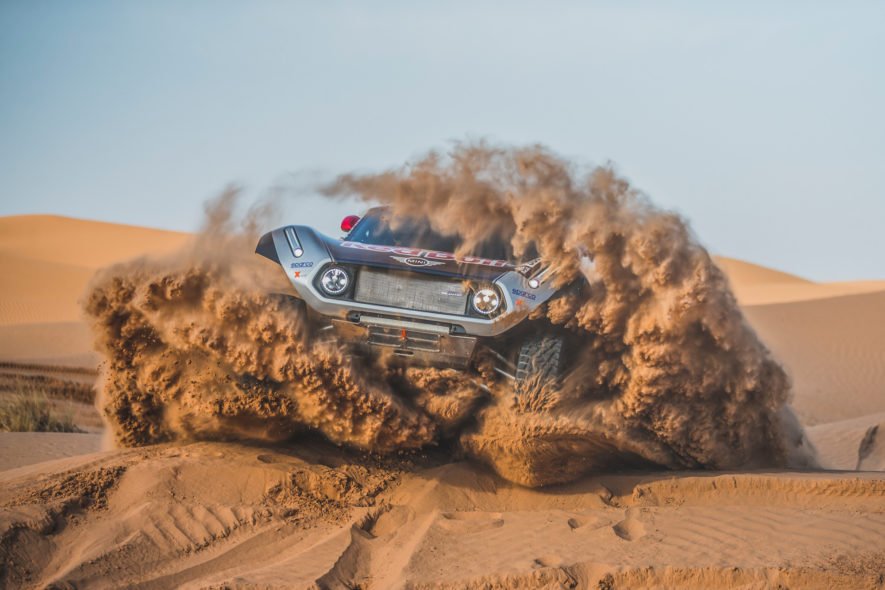 The crackle of excitement surrounding the 2019 Dakar Rally just got a whole lot louder. The new X-raid MINI JCW Team will be taking their place on the starting grid in Peru with a line-up of exceptional driving talent. Former Team Peugeot Total drivers Carlos Sainz, Cyril Despres and Stéphane Peterhansel boast a staggering 20 Dakar victories between them. The trio will each be racing a MINI John Cooper Works Buggy at next January’s Dakar in South America.

As reigning champion of the Dakar, there’s a weight of expectation that comes with Carlos Sainz’s return to racing. The two-time Dakar champion and two-time WRC title winner is confident MINI have provided him with a package to compete for victory in Peru. Sainz is joined by fellow Spaniard Lucas Cruz, the co-driver who has plotted the route for both of his Dakar wins.

“Stepping into a new car always brings with it new challenges. We’re happy with the hard work we’ve been doing with X-raid and we’re ready to fight for good results.” – Carlos Sainz

Joining his team-mates for this new adventure is Frenchman Cyril Despres. Since leaving behind a glittering bike racing career which delivered five Dakar wins, Despres moved into the car category in 2015. There has been success already on four wheels with two wins at the Silk Way Rally. Now Despres is aiming to top his best Dakar car result of third overall, secured in 2017. Despres will have his compatriot Jean-Paul Cottret alongside him, the co-driver that worked with Peterhansel for 17 years and seven wins.

“It’s a huge benefit to be in this new MINI team with Stéphane and Carlos, everyday there are lessons these guys can teach you.” – Cyril Despres

The third X-raid MINI JCW Team driver is Monsieur Dakar himself, Stéphane Peterhansel. As if six Dakar bike victories were not enough, the French racer has so far collected a further seven car wins at the rally. Peterhansel’s 13 victories make him the most successful athlete the Dakar has ever known. His seven car wins make him the joint-most successful competitor in a single category, tied with Vladimir Chagin’s heroics for Kamaz in the truck division.

“This next Dakar will be special for me because I’m back with X-raid. Before, when I drove a MINI at the Dakar we won the rally in 2012 and 2013.” – Stéphane Peterhansel

The rear-wheel drive MINI John Cooper Works Buggy, with a top speed of 190kph, has been tested throughout the year by X-raid’s seasoned mechanics and engineers. Now the keys will be handed over to a dream team of drivers aiming to conquer the most extreme motorsports event on the planet.

Later this week, the offroad machine will be put through its paces by Sainz and Despres at the six-stage Rallye du Maroc – starting on October 4. The dunes of Morocco are the ideal place to give the buggy a full-speed run out before tackling the deserts of Peru early next year.

With nearly 2,000 kilometres to be covered over six days, Rallye du Maroc will be an invaluable learning experience for the team. Peterhansel will not be racing with the X-raid MINI JCW Team in Morocco, but he’ll be revving up his own MINI John Cooper Works Buggy in South America when the Dakar comes to visit next January.

Carlos Sainz: “Stepping into a new car always brings with it new challenges. I’m feeling happy with how the MINI feels and I’m confident we can do well with this new project. Everything has been put in place to ensure we are as well prepared as possible for what is to come.”

“I’m excited to give my best to defend my Dakar title in Peru but I know it will not be easy. The level of competition at the Dakar is always so high. A lot will depend on what type of terrain we end up racing on. I’m predicting a close race between the top teams in South America. We’re certainly happy with all the hard work we’ve been doing with MINI and are well prepared to fight for good results for the team.”

“It feels good to be here in Morocco because it gives us the chance to race our MINI John Cooper Works Buggy. The testing has been going on throughout the year, but now it’s time to race. There are things you can only learn about a car during race, so let’s see how we perform here. I’m convinced we’ll learn a lot at Rally du Maroc and second to that we’ll try to win. It’s a perfect opportunity for us.” 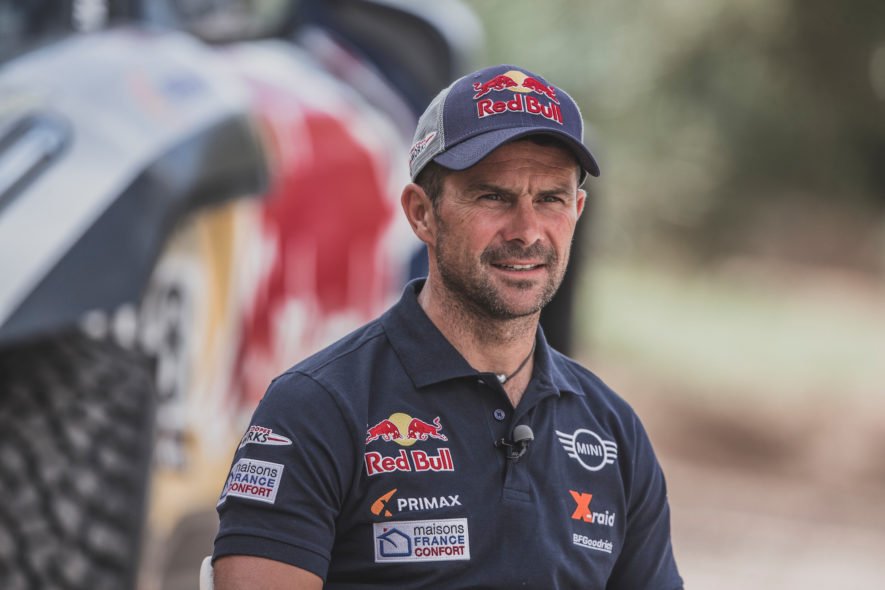 Cyril Despres: “I still feel like I’m at the beginning of my car racing career. Of course, I’ll never forget the victories I had on the bike and it’s quite useful to have this knowledge of the desert. But when it comes to cars I still have a lot to learn. Luckily for me, I’m with the best guys in the world to learn from. Stéphane and Carlos are my team-mates, and although we all want to beat each other that never stops them from sharing their knowledge with me.”

“Life has been really good to me and I enjoyed all the time I spent racing bikes, especially the wins. Now I’ve been given the chance to have this second career on four wheels and I’m excited to find out what more I can achieve. When I see guys who are older than me still enjoying themselves in our sport, I think I would like to continue for some time yet.”

“It’s a huge benefit to be in this new MINI team with Stéphane and Carlos, everyday there are lessons these guys can teach you. In my experience the best teachers are those who have the most experience to share, and these guys have done it all. We have such a great spirit in this team because everybody wants to do their best, but they also want you to do your best also. They don’t keep any secrets, when they have something to say that can help – they will tell you. It’s a privilege to be inside this atmosphere.”

Stéphane Peterhansel: “This next Dakar will be special for me because I’m back with X-raid. Before, when I drove a MINI at the Dakar we won the rally in 2012 and 2013. I have so many great memories from these races. There’s still a lot of the guys who worked with me back then in the team so it’s great to be back and reignite that successful understanding.”

“We’ll be driving the second generation of the MINI John Cooper Works Buggy. This is a vehicle that has been worked on a lot and has been greatly improved. We have been testing the engine and there is more power there than before. The shock absorbers have also had a big upgrade. The third aspect to mention is a reduction of weight, this has made the buggy faster. For me, this is a vehicle that is ready to perform at the Dakar Rally at a very high level.”

“The Dakar takes place over two weeks in January, but believe me you need to be preparing for it during the other 50 weeks of the year to be successful. One part of this is testing and improving the car you will drive, the other is to work on your own physical conditions. Throughout the year I cycle on the roads and in the mountains as well as staying active with a motorcycle, jet ski and whatever seems like fun. Physical fitness is one thing, but you also need to go fast to replace real racing. This is where you can test your reflexes, which you rely on when racing the Dakar.” 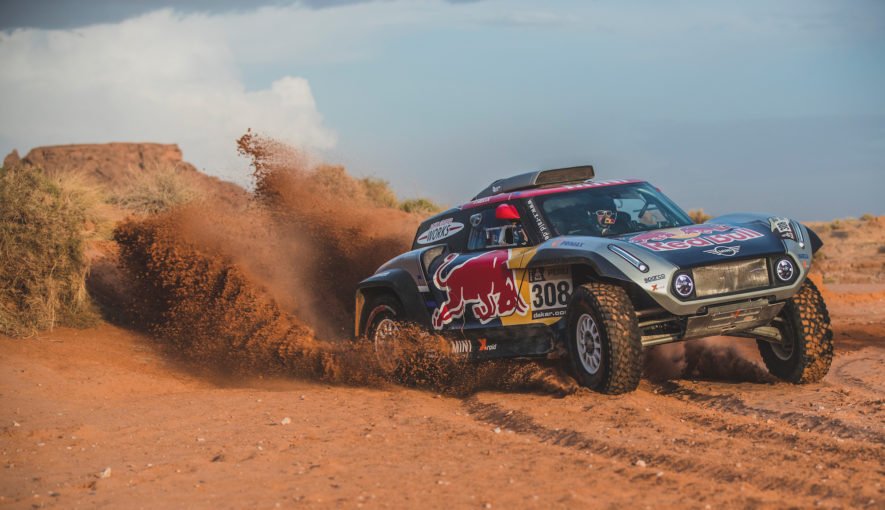 Sven Quandt, Team Principal of X-Raid: “This trio is obviously a dream cast, which also brings with it a wealth of experience. Carlos has given us a lot of support during the development of our MINI and has taken us forward in this regard – particularly in terms of the set-up. Stéphane is an old friend and I am delighted to have him back in the team. Cyril has also shown what he is capable of in recent years, and I am intrigued to see how he puts his ability into practice with us. In any case, he already has plenty of kilometres under his belt in our car.”

“Our MINI has satisfactorily completed a lot of test kilometres in recent months and we are very excited about its first competitive outing.”