SS9 Tucuman – Cordoba  852 km (176 km liaison – 593 km special – 83 km liaison)
After the rest day in Tucuman, Team HRC riders today tackled the longest stage of the Dakar 2013 with a 593-km long special split into 2 timed sections with 122 km of neutralised sector.
Starting second, Johnny Campbell was able to take advantage of the fast tracks followed by a more technical part. He rode with a good consistent pace, finishing the first special in third position behind Despres and Barreda.  Despite  a small crash at the beginning of the second stage that made him stop to replace the front brake lever, he finished in the top ten.
Team mate Rodrigues was 2nd at the CP1 but lost valuable time finishing 8th at the end of the first special stage, although he was able to recover in the second timed section. With today’s 5th position Helder moves up into  7th position overall, 31’23” behind Faria who leads the general classification. 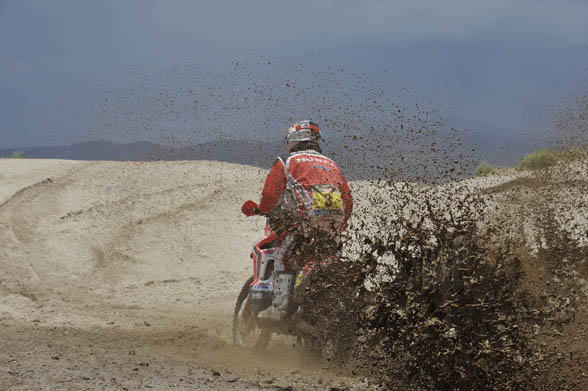 A difficult day for Javier Pizzolito who was not comfortable on the rocky terrain and preferred not to take too many risks. Finishing 26th overall, the Argentinian rider lost 2 positions and now sits in 12th place overall.
Helder Rodrigues SS9 5th +8’47, 7th overall: “It was a long day, the navigation was not difficult but it was hard for the machine, the tyres and our bodies. I didn’t want to take too many risks as it was quite dangerous out there so I’m happy with my result”. 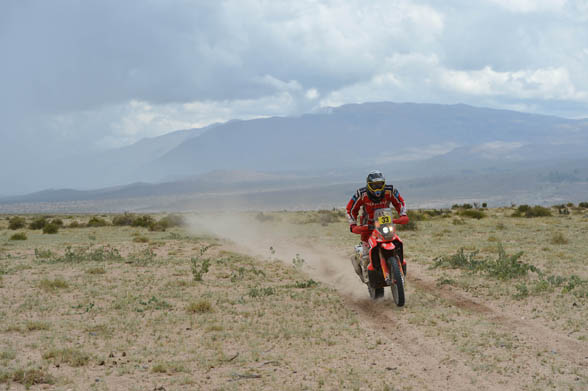