After a four-week break, the Lucas Oil Off Road Racing Series, presented by GEICO, is back in action! This weekend, the series returns to Speedworld Off Road Park in the northwestern Phoenix suburb of Surprise, AZ, the only track that’s been on our series’ calendar every year since the series began. A lot of history has been made here, and with smooth jumps, a tough mogul section, and a unique mix of fast and slow turns, it’s easy to see why this track is a fan favorite. Rounds 5 and 6 of the championship will be run this weekend, but before tomorrow’s Round 5 races, there was qualifying to be sorted out today. Drivers really want to set themselves up well for the start of tomorrow’s race with a good run in qualifying today, and to find out just how your favorite drivers fared, read on and learn.

For a full picture gallery, check us out on FLCKR.

Pro 4 Unlimited
First up this afternoon were the Pro 4 Unlimiteds, and as has been the norm this season, Kyle LeDuc was the dominant force out on track. LeDuc had the fastest opening lap, a 55.869 in his #99 Monster Energy/Toyo Tires Ford, before briefly getting knocked off the top spot by his brother Todd in the #7 Rockstar/Makita Ford, after Todd ran a 55.198 on lap two. Kyle returned to the top with a 54.577 on lap three, then lowered his session-leading time thrice more, ending today’s qualifying with a pole-winning time of 54.053. Second went to Todd LeDuc, who improved to a 54.338, while third place went to Eric Barron in the #32 LAT Racing Oil/Rancho Performance Drivetrain Toyota, who turned a 54.620 on lap five. Defending champion Carl Renezeder took fourth with a 54.669 in his #1 Lucas Oil/General Tire Nissan, and rounding out the top five was Josh Merrell, who only managed to make three laps in his #22 MavTV/Hart and Huntington Ford, yet timed in with a 55.506. 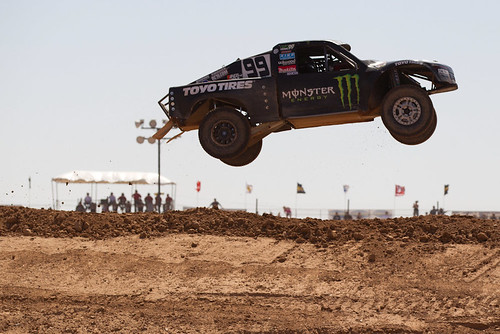 The drivers of Pro Lite Unlimited once again ran a two-heat qualifying session this afternoon, and in session one, it was points leader RJ Anderson who was simply untouchable in his #37 Monster Energy/Walker Evans Racing Dodge. Anderson opened the session on top with a 1:00.075, then lowered the fast lap four times, never relinquishing the top spot along the way, and ended up with a 57.965, the only man under the 58 second barrier, to lead session one. Chris Brandt finished the session second with a 58.594 in his #82 BFGoodrich Tires/National Concrete Cutting Toyota, and Noah Fouch took third with a 58.959 in his #52 Fouch Racing Ford.

In session two, Bradley Morris opened with a 59.605 to lead the field early in his #24 GoldStar Asphalt!/Lucas Oil Ford, then dropped that top time to a 59.109 on  lap two. Chad George then snagged the top time on lap three with a 58.980 in his #42 Discount Tire/Traxxas Ford, before Morris moved back to the front with a 58.956 on lap four. Morris then dropped a sizeable amount on lap five, moving the session’s best time to a 58.233, a time that held up for the remainder of the session. George improved to a 58.584 to remain second, and Casey Currie finished third with a 59.002 in his #2 Monster Energy/General Tire Nissan. 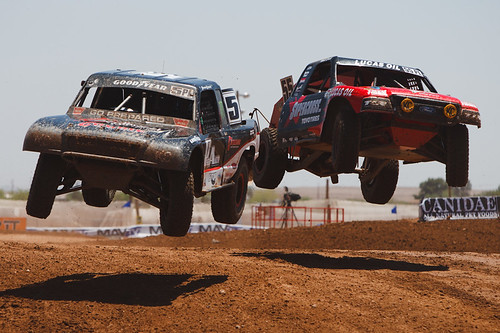 After the lap times of both sessions were combined, the overall top five is as such: Anderson on top at 57.965, followed by Morris with 58.233, George with 58.584, Brandt with 58.594, and Fouch with 58.959. In this extremely competitive class, Anderson’s pole means that he is now the first driver in the class to have more than one pole this season.

In today’s Super Lite qualifying session, the battle between Sheldon Creed and Drew Britt (the top two points contenders) waged once again. Britt had the opening shot, leading the early lap charts with a 1:01.707 in his #7 Quick Lane/Source Refrigeration and HVAC truck, but had his top spot snapped up by Creed on lap two, when the #74 Racer X Motorsports/Fox Racing Shox truck came by in 1:01.094. Creed then improved to a 1:01.008 on lap three, a time that held up at the top for the balance of laps, as Creed picked up his fourth pole in five races this year. Britt improved to a 1:01.707 to hold second, while Cody Rahders rounded out the top three with a 1:01.798 in his #16 Superchips/K&N machine. Dawson Kirchner returned to the class for the first time this season, and slotted in fourth in his #18 General Tire/Method Race Wheels entry, with a best time of 1:01.926. Fifth place went to the #62 Supercross.com/Loctite truck of Garrett Poelman, whose best lap was a 1:02.137. 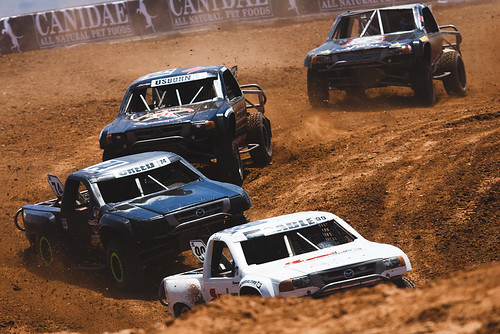 Pro 2 Unlimited
In Pro 2 Unlimited, points leader Marty Hart was first out on track, and he took full advantage, slotting in first on lap one with a 57.735 in his #15 ReadyLift Off Road Suspension/GearUp2Go.com Ford. Hart improved to a 57.170 on lap two, then a 56.782 on lap four, before Greg Adler came in and took the top spot away, turning a 56.663 on lap five in his #10 4 Wheel Parts/Magnaflow Performance Exhaust Ford. On the final lap, though, Rob MacCachren got the last laugh in his #21 Rockstar/Makita Ford, as he left the rest of the field in the dust with a sensational 55.820 to take pole, nearly seven tenths up on everyone else. Jeff Geiser took second with a 56.532 in his #44 Tap It Brewing Co./Canidae Chevrolet, while Adler’s earlier time kept him in third. Rob Naughton finished fourth with a 56.770 in his #54 Lunar Pages Web Hosting/Hart and Huntington Ford, and after leading early, Hart’s best time was only good enough for fifth by session’s end. 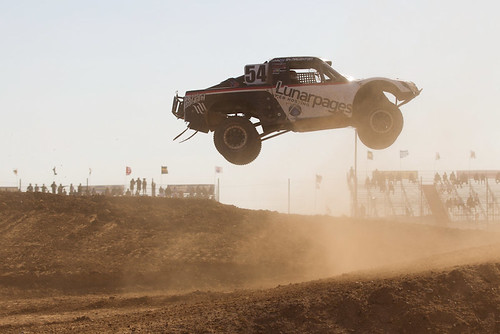 Pro Buggy Unlimited
In Pro Buggy Unlimited, today’s qualifying session was all about Doug Fortin. Fortin opened with a 1:01.318 in his #96 Fortin Racing, Inc./Fox Racing Shox Racer to head the lap charts, then improved to a 1:00.285 on lap two to stay on top. Fortin then dipped under the one minute mark on lap four with a 58.853, and ended the session with a 58.663 to take the pole. Fortin held the top spot throughout the session, en route to becoming the fourth different pole sitter in five races in this class. Second went to Steven Greinke in the #23 SC Fuels/Redline Performance Racer, with a best lap of 59.008, while third was Cameron Steele, who turned a 59.388 in his #16 Monster Energy/Yokohama Alumi Craft. Garrett George finished fourth with a 59.481 in his #71 Yokohama/Anenberg Funco, and rounding out the top five was Larry Job in the #7 Supercross.com/Toyo  Tires Alumi Craft, whose best lap was a 59.496. 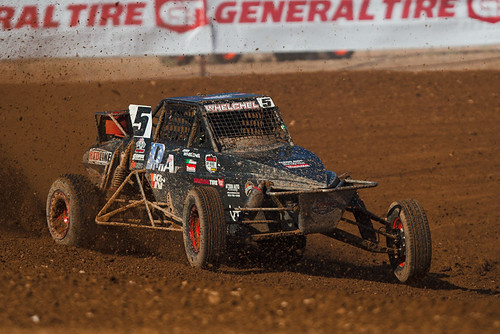 Limited Buggy
The final qualifying session of the afternoon on the big track was that of Limited Buggy, and it was Bradley Morris in the #304 Lucas Oil/K&N Alumi Craft who had the fastest opening lap, a 1:04.187. On lap two, Jordan Poole moved to the top of the time sheets with a 1:03.356 in his #310 Riot Racing/Fat Performance Fraley, with John Fitzgerald then snagging that spot away on the next lap with a 1:02.945 in his #314 BFGoodrich Tires/Simpson buggy. Fitzgerald improved the top time again on the last lap, taking the pole with a 1:02.478; amazingly, despite his speed, this is Fitzgerald’s first pole of the season, and he maintains the class’ perfect record of five different pole sitters in the first five rounds this season. Dillon Ayers took second in the #398 Gear One/BFGoodrich Tires Lothringer, with a best time of 1:02.600, and Poole improved to a 1:02.744 to finish third. Morris also improved his earlier time, dropping down to 1:03.226 to finish fourth, and Kevin McCullough finished fifth in his new #389 Lucas Oil Geiser, with a best lap of 1:03.368. 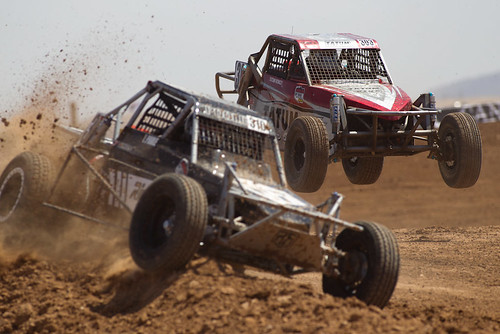 Round 5 of the Lucas Oil Off Road Racing Series, presented by GEICO, kicks off in earnest tomorrow at 8:00 am here at Speedworld, when gates will open to the public, ahead of the first race of the day, Junior 2 Kart, at 9:00 am. In an effort to beat the heat, Opening Ceremonies will happen at 11:30 am, so bring your water and your sunscreen, and get out to Speedworld and enjoy a great day of off-road racing fun!

About the  Lucas Oil Off Road Racing Series: