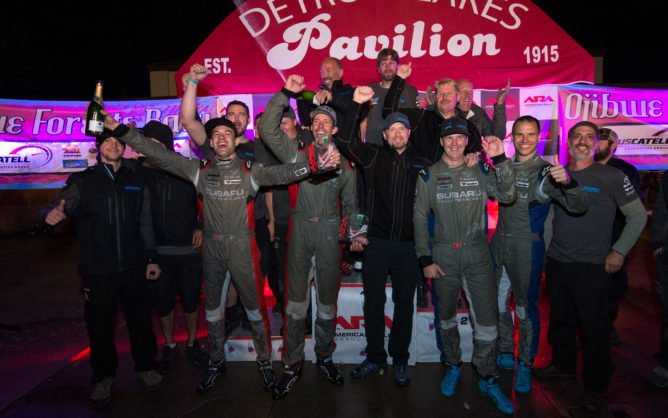 At the conclusion of the Ojibwe Forests Rally, the championship’s final round, ARA officials would need to apply two levels of tie-breaking rules to determine the champion.

Pastrana and Higgins traded wins over the inaugural six-round ARA championship leading into the final event. In order for Pastrana to claim the title, he would need to win the Ojibwe Forests Rally, and should Higgins finish in 2nd place at the rally, Pastrana would need to also win more overall rally stage wins than Higgins. The Subaru Rally Team USA factory duo battled so closely through the Ojibwe Forests Rally that an absolute winner wasn’t decided until the final two stages of the race. After a slight fault on the penultimate stage, Higgins would ultimately cede the rally and the Championship to Pastrana.

“We crashed out the last three years trying to chase David and Craig. They were spot on all year and they had a lot of adversity. We were able to make it work on the last stage and here. It is my dream come true. Thank you Subaru. Thank you for everyone who came out to the race. He (Higgins) is my mentor, my coach. I couldn’t have been here without that guy,” enthused Pastrana with Higgins beside him at the podium celebration.

“We gave everything we had. We had a big job on our hands after the time we lost on the first day with some adversity. Props to Travis and Robbie for a great rally and to win the championship. It was a great season and great competition. I’m looking forward to come back at it again.”

The battle to the finish line between our two guys to the very end of the season was as riveting as it was spectacular,” stated Subaru Motorsports Manager. “Subaru congratulates Travis Pastrana and Robbie Durant on their championship win and thanks both teams for claiming the inaugural ARA Manufacturers’ title for Subaru.”