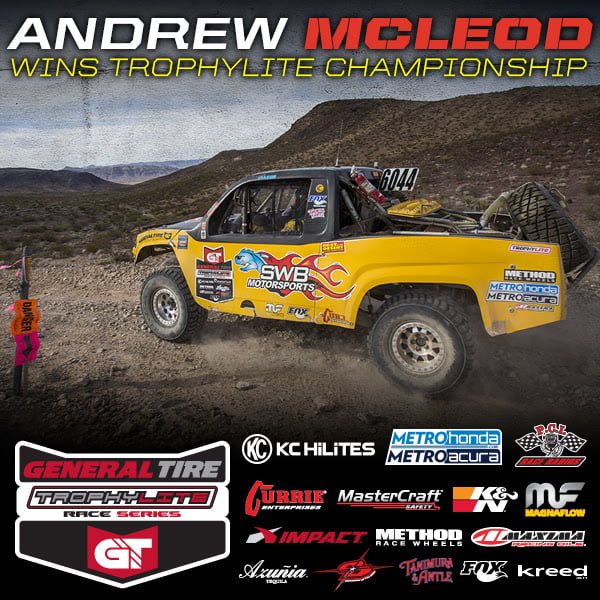 All bets were off at the final race in the General Tire Trophylite racing series; the Best In The Desert, Henderson 250 in Henderson, Nevada. The season long points chase appeared to be locked up by Andrew McLeod who was leading PJ Guglielmo by a tight but seemingly unsurmountable points tally. Guglielmo would need a perfect storm in Henderson to overtake McLeod. He would have to win the race and McLeod would have to dnf, (did not finish). After a 9th place draw for starting position, it seemed an impossible mountain for Guglielmo to climb however, nothing is a given in the super competitive Trophylite series. 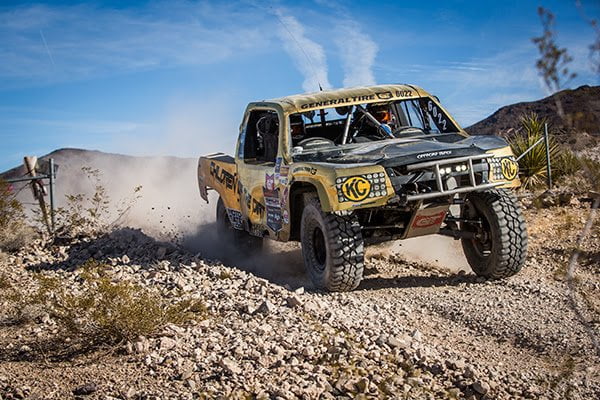 In the thick dust and endless rocks on course, Guglielmo’s perfect storm nearly materialized. McLeod hit a boulder in the dust on lap one that wrapped his wheel around the front suspension. It took an hour to get the mangled wheel off and make repairs. The same strength that prevented the Method Race Wheel from shattering, made it tough to extract when it was literally forged around the front hub. Rocks obscured by thick dust would wreak havoc on everyone in the field. As competitors stopped to change flat tires and damaged drivelines, Guglielmo moved up through the field to eventually take the lead. He too was slowed on the final lap when boulders caused his wheel to deform. The wheel was hitting the caliper but his General tire was still holding air. With several Trophylites on his tail, he ran as fast as he could to the checkered flag and the win. Guglielmo won the battle but McLeod got his Trophylite back on course and won the war.

“You can’t ever sit back and relax in Trophylite,” said Andrew McLeod, “You have to go full blast every race. I was probably pushing a bit too hard when I hit that boulder. I was in my sister Meagan’s dust when I heard her co-driver call out rock, then we slammed into it; we’re both on the same radio frequency. It took us an hour in the pits to get it off the car. Our mechanics saved the race and have been great all season. We consistently ran up front all season and finished every single mile. Our last place finish made the championship a lot closer than we wanted but we made it. PJ (Guglielmo) never gives up, in fact, the top five is never more than 2 minutes apart; it makes it such a fun class to run. My sister Meagan drove the whole race; finishing just 8 seconds behind Craig Spitz in third and 4 seconds ahead of Jeff Proctor in 5th. We are proud of Meagan and proud of winning the Trophylite Championship.” Andrew McLeod and the Southwest Boulder team had an impressive season with a victory at the Silver State 300 and 4 straight podium finishes. Only 3 points separated McLeod from PJ Guglielmo. 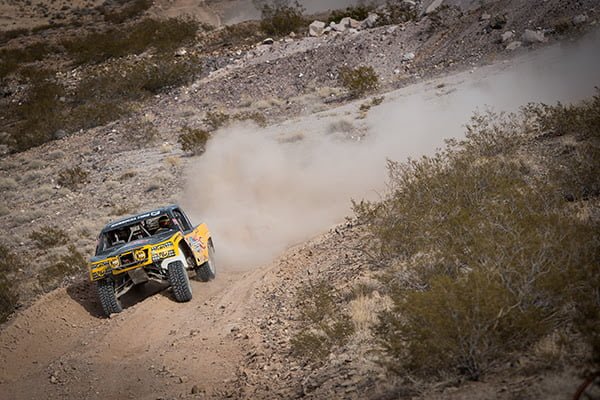 The race win went to Guglielmo, his third win this season in the Children of the Dirt, KC HiLites Trophylite. “We did not know we were running in the lead,” said Guglielmo, “We passed Proctor in the dust; we never saw them. When we drew the 9th place starting position I figured we would never be able to make it up to the front pack. Mortis, Jackson, Proctor, McLeod, all the teams are hard to beat. 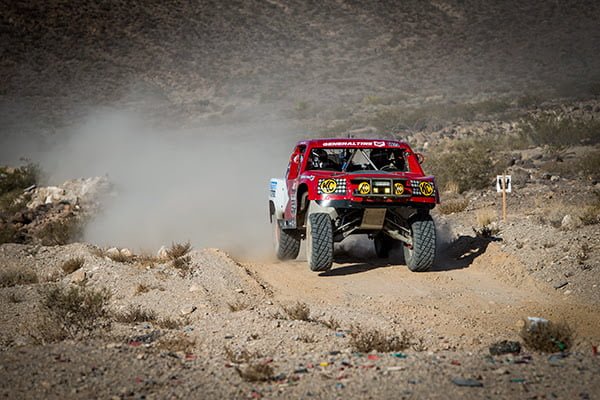 We got past Mortis in a wash, and then we passed Meagan and Spitz who is going to be serious threat next year with a bigger motor. Rocks in the dust were taking everyone out so I tried to be smart. A few times I almost slowed to a stop until I could see ahead. On the second lap I throttled down and drove the wheels off of it to the finish. We were told to take it easy up beer bottle pass but we railed up it. We did what we had to in order to pass 9 trucks during the race.

We picked up a bad vibration so I played with the throttle trying to find an rpm that would smooth it out. We hit a rock that bent a wheel. It was rubbing the caliper but I knew if I stopped just to look at it, I would lose two or three positions so we kept going. The McLeod’s are a tough team to beat. I followed Meagan for 6 miles during the race; she was tearing it up. We missed the championship but won 50% of the races this year and will take another second in the points championship. There is nothing wrong with finishing on the podium another year. This class is tough!” 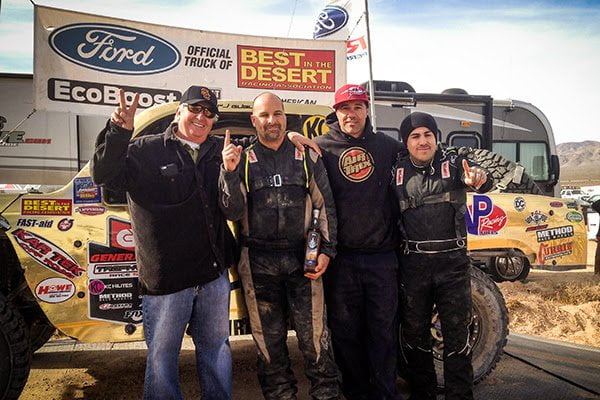 Finishing in second place was the Challenge Financial Services Trophylite of Jeff Mortis. “We started next to PJ and got the hole shot,” said Jeff Mortis, “It felt great to beat him off the line. We passed Andrew (McLeod) and caught a few others in the dust. The first 15 miles was the worst dust ever. 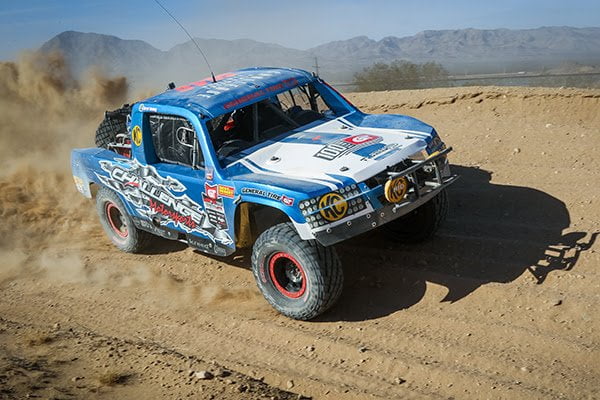 After another 10 miles we hit a rock and had to stop and put on the spare. From then on, we were playing catch-up. On lap 2, Chris (Wacker) got in and took it home in second. We raced our way up to third place in the championship and got to toast it with our bottle of Azuñia Tequila Reposado.” 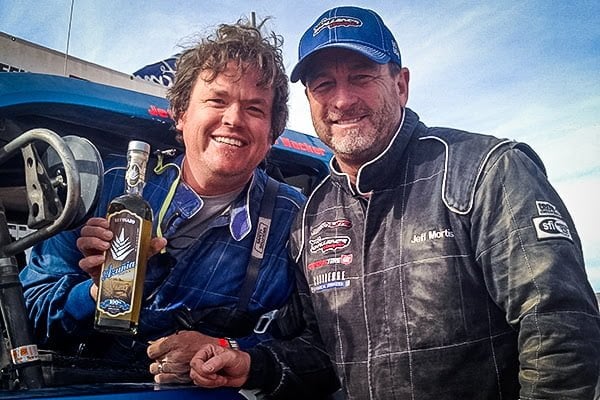 Rounding out the podium was Craig Spitz in his Tri State Equipment Rentals Trophylite. Spitz started on the pole for this race but knew he would have a tough time holding back the hard chargers with a smaller 2.2 liter motor in his truck. “Proctor got past us right away but then we had some clean air; we were holding our own,” said Spitz, “Proctor stopped putting us in the lead. PJ took the lead from us but we were still doing pretty well. 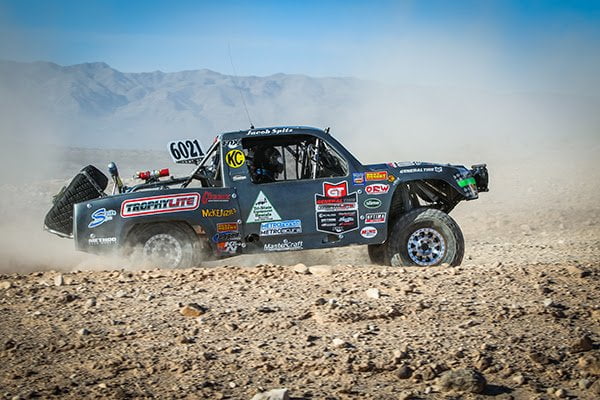 We pitted with the challenge truck (Jeff Mortis) and my crew got us out first. We were holding down second place when they caught us 5 miles from the finish. I knew they were in the championship hunt and went through hell catching us in the dust so we let them go by. Even in clean air it was tough avoiding the rocks on the course. We are very happy with a podium in our 4th race. We are excited for next season. We will be going to the 2.4 liter motor and will be trying some new things. Trophylite is such a fun, competitive racing class.” Craig Spitz earned the Metro Honda / Metro Acura Hard Charger Award and $500 dollar cash bonus with his incredible podium finish at the Henderson 250. 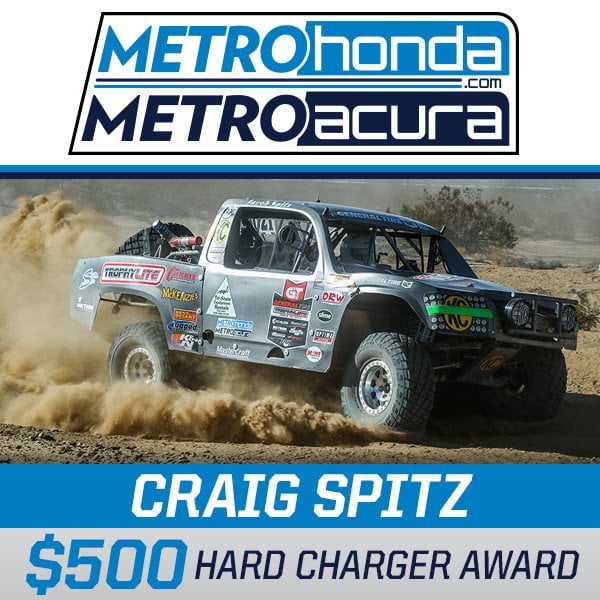 Since 2006, the Trophylite racing series has provided affordable SPEC class off-road racing to countless teams and to individuals through their race rental program. Every competitor benefits from a solid support program with the best suppliers and sponsors in off-road racing including General Tire, FOX, Mastercraft Safety, Impact, Method Race Wheels, Metro Honda / Metro Acura, Maxima Racing Oils, K&N Filters, Magnaflow Exhaust, PCI Race Radios, Currie Enterprises, Azuñia Tequila, Children of the Dirt Apparel, Tanimura & Antle and Kreed Eyewear by Fortress. 2016 will see some changes to the series. After 8 years as a sponsor to the series, General Tire will be departing the series. Over the years, General Tire has supplied three tire designs to the series that have all become highly successful. The series began with the street legal AT2 tire, and then introduced the Red Letter Grabber, race tire to competitors. Eventually, the MT Mud Terrain tire was also used by Trophylite competitors. 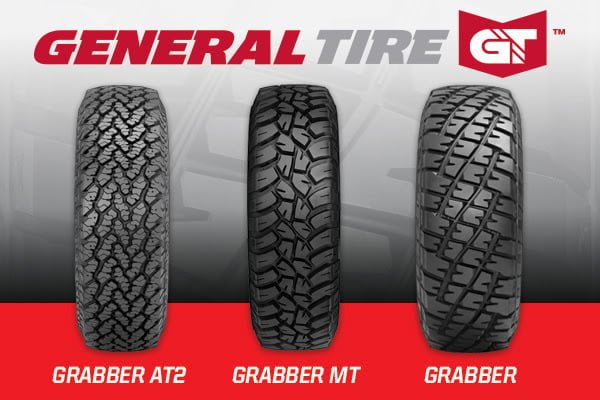 All three tires were used this season by competitors. General Tire has been a great supporter of the series. They have helped to crown many champions and helped countless racers to realize their dreams of racing off-road.

Also departing the series is the ever determined competitor, PJ Guglielmo. PJ is building a new 6100 class truck for competition in 2017. “I will be at the races helping Trophylite but I will not be competing,” said Guglielmo, “Trophylite is like a family to me, I am moving to another class, but I will still be involved with Trophylite series.” 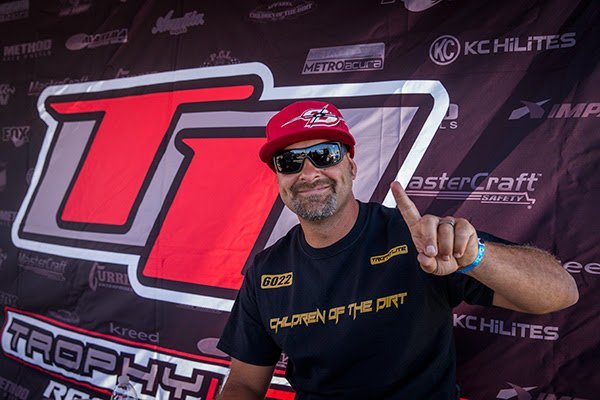 As some move on, others join the series with their own goals and dreams. At the Henderson 250, Zim racing’s Father and Daughter team finished the race in 7th place. Father Sandy drove lap one and in her first race ever, Daughter Sydney brought the truck home on lap two. “It was amazing,” said Sydney, “It was a big challenge for me. I had some nerves before I got in the truck but once I got going it was so much fun. The dust and rocks were really challenging.” 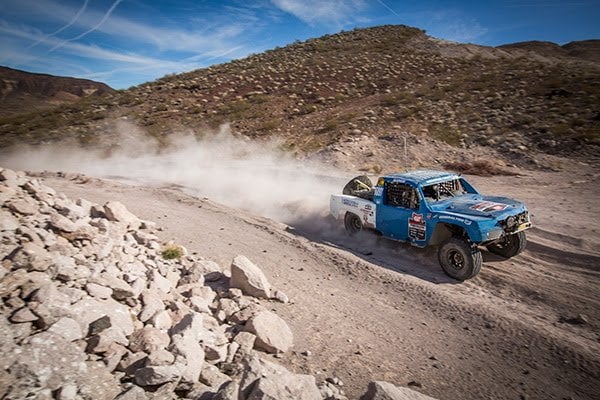 Sydney had some coaching before her first race at the Desert Racing School of Ron Stobaugh and is looking forward to doing some testing while on winter break from college. Enthusiasm for the 2016 Trophylite season is stronger than ever and for some, can’t come soon enough. Trophylite racing resumes only weeks away at the Bluewater Resort Parker “425” February 4- 7, 2016. 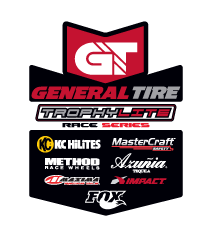 The General Tire Trophylite Race Series was created to provide an affordable alternative to the high cost of racing. Drivers are pitted against each other in identical vehicles that provide the thrill of competitive offroad racing without the million dollar price tag. All Trophylite race vehicles are precisely constructed to maintain parity and use the finest quality components available. Trophylite allows you to compete in a fun, fast, race proven vehicle right out of the box. With generous sponsorship from General Tire, KC Hilites, Metro Honda, Metro Acura, Currie Enterprises, Mastercraft Safety, Impact, Method Race Wheels, Azunia Tequila, Maxima Racing Oils, FOX, Children of the Dirt, K&N Filters, Magnaflow, PCI Race Radios, Tanimura & Antle & Kreed Sunglasses you can cash in on the prize money that is up for grabs during the 2015 season.