Tyme Agency athlete Jerett Brooks capped off his remarkable 2014 race season with an impressive four race winning streak and sweeping all three races held this past weekend at the Lucas Oil Off Road Racing Series finale in Lake Elsinore, CA.

Jerett had his truck working flawlessly all weekend and set the pace from the get go by posting the fastest qualifying time for the Pro Lite division to kick off his impressive race weekend. Brooks would go on to win Friday nights main event with an impressive run working his way through the field of past champions to the top spot. He then followed up his Friday night victory with a pair of wins on Saturday which included an amazing performance in the Challenge Cup where he came from an 11th place starting to position and meticulously worked his way to the #1 position with just two laps remaining in the race.

“This past weekend will go down as one of the top moments in my racing career for sure! I feel so lucky to have had the opportunity to race against so many great drivers this year in three separate series and I really feel that experience gave me the confidence needed to perform at my highest level this weekend!” Says Jerett Brooks

Brooks now has his eyes set on the 2015 race season where he will be competing with his confidence at an all time high with the goals of continuing to progress in this sport both on and off the track. 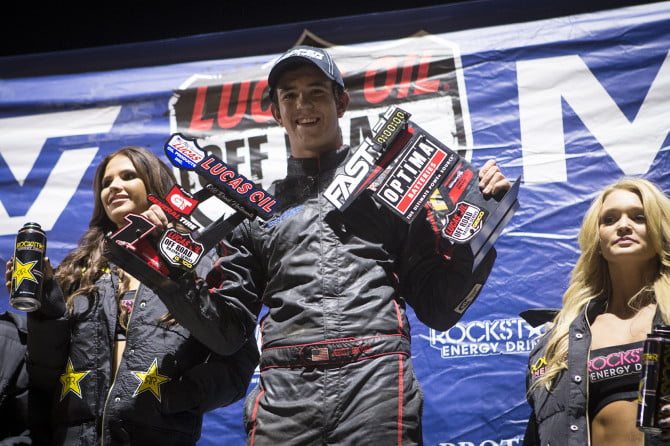