The Primm 300 race, which usually takes place in the small town of Primm, Nevadaon September 9-11, was moved a few months ago to the small fishing villageof San Felipe, Baja California. This was an unexpected yet pleasant change to some, being that the same exact course had just been run a few months ago at the Mastercraft Safety San Felipe 250 in February, making it an advantage of a sort. 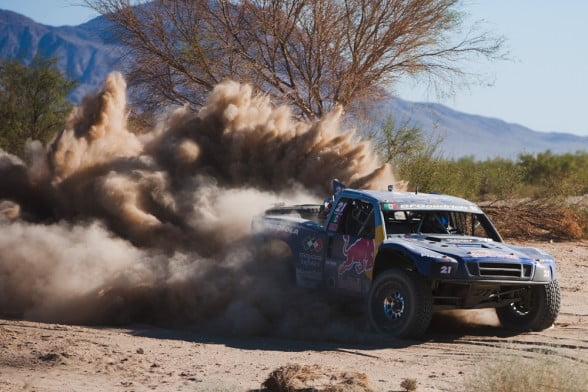 Rob MacCachren #20 was the first trophy truck off the start line at at 7:00am in 94°F weather with some wind in favor to help with visibility. Tavo with Javi Valenzuela as co-driver, in Vildosola’s #21 trophy truck started 4th at 7:03am behind MacCachren, Cameron Steele # 16 and Adam Householder #24.

Upon reaching race mile 20, Tavo passed Householder and Steele and by mile 70 he was 50 seconds behind MacCachren. Then at mile marker 90 Vildosola’s #21 was 20 seconds behind Rob and was able to pass him when MacCachren pulled into his pit, this immediately put 1:00 between them.  20 miles later, #21 still had a 1:15 lead over MacCachren, after stopping for a fuel top off they still had a 23 second lead over #20.

It was at race mile 196 when the lead expanded into 1:45, and then the left rear tire came loose and sheared the studs off the hub. The nearest chase team had to come in and change the hub and repair all the collateral damage which took about 2 hours.  After getting the truck up and running, at mile 224, the axle came out of the housing and lost the team another 20-30 minutes in repairs. Lastly at mile 240 the right front shock blew and consequently caused two right flats.

With only 12 more miles to finish, the Vildosola Racing trophy truck limped to the finish line for the 9th position.

This was the 4th race of the season for SCORE International leaving only one more to determine the champion for the points
this year, the granddaddy of all races: the Baja 1000.
*Ride along with Tavo for the first 15 minutes of the San Felipe Challenge of Champions aboard Trophy Truck.

To check out pictures, videos, previous press releases, the team’s progress and other information go to www.vildosolaracing.com; for the latest videos of the team visit their YouTube site at www.youtube.com/vildosolaracing