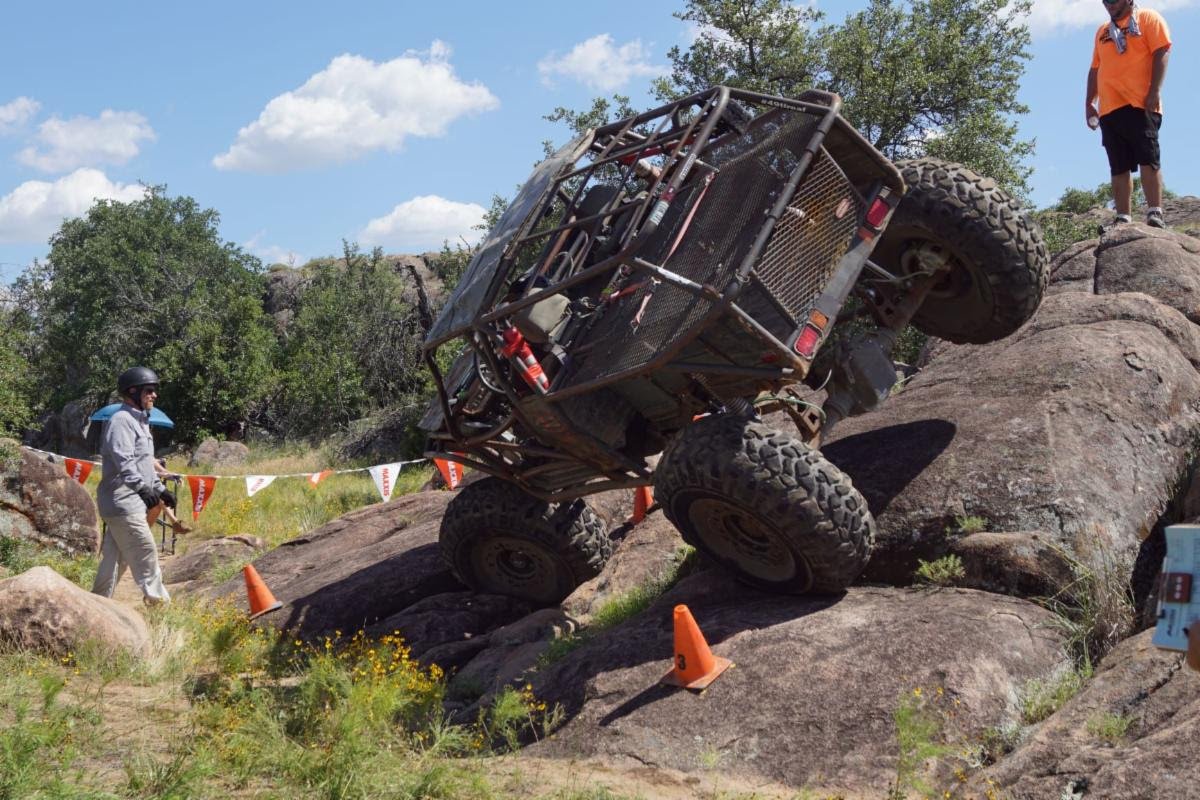 Gotta love Mason, Texas! No, seriously, we do – it’s the cutest little town. Clean, vibrant, but with a chill kind of atmosphere. By 11 p.m. the streets are rolled up and put away for the night. The courthouse clock rings it’s bells whenever it feels like it, right now, it’s about four hours off. The police look like they’re everywhere because there are only three of them, and they all drive the same roads. The rocks are incredible, you can find slabs in the river to cool off on, and flows for days at the off-road parks.

K2 – the new Katemcy Rocks was the site of the Eastern Series opener, delayed for almost three months because of COVID-19, we were finally able to host on June 6-7. There’s a reason we had it planned for March, when the weather was a little less predictable, but not so dangable hot. And Hot it was! The temperature hovered in the high 90’s with 60% humidity for most of the weekend. The judges and competitors had it the worst, being out on those sun-baked granite boulders. You couldn’t drink enough water to stay hydrated.

Little Landen Brown brought the Sub-Zero car out to compete, it is so fun to watch him school those courses, he’s really becoming a driver. This is his second year to compete, and you can see the difference in his skill level. At barely 7 years old, he has developed a great feel for the rocks.

Our Sportsman B class had an odd mix. Bill Stayner, who has competed with us at Donner in the past had his Toyota on the Rocks…Bill’s one of my favorites because of his attitude. Always smiling, his beast doesn’t fit all the places other rigs do. Heather Royston joined the comp this time, she has a new-to-her Campbell buggy that was built awhile ago. I think we hooked her, it helped that she ended on the podium. Christian Chandler, uncle to Landen Brown, brought his new car out for a first run – I won’t say he broke all of it, but it might need some repairs after the first competition. Taking top honors in Sportsman B was Jewell Jenkins. Jewell and her dad, Rick, hail from Farmington, New Mexico, home to our Grand Nationals. She pulled off some amazing lines this weekend in Pinky and even helped with recoveries! 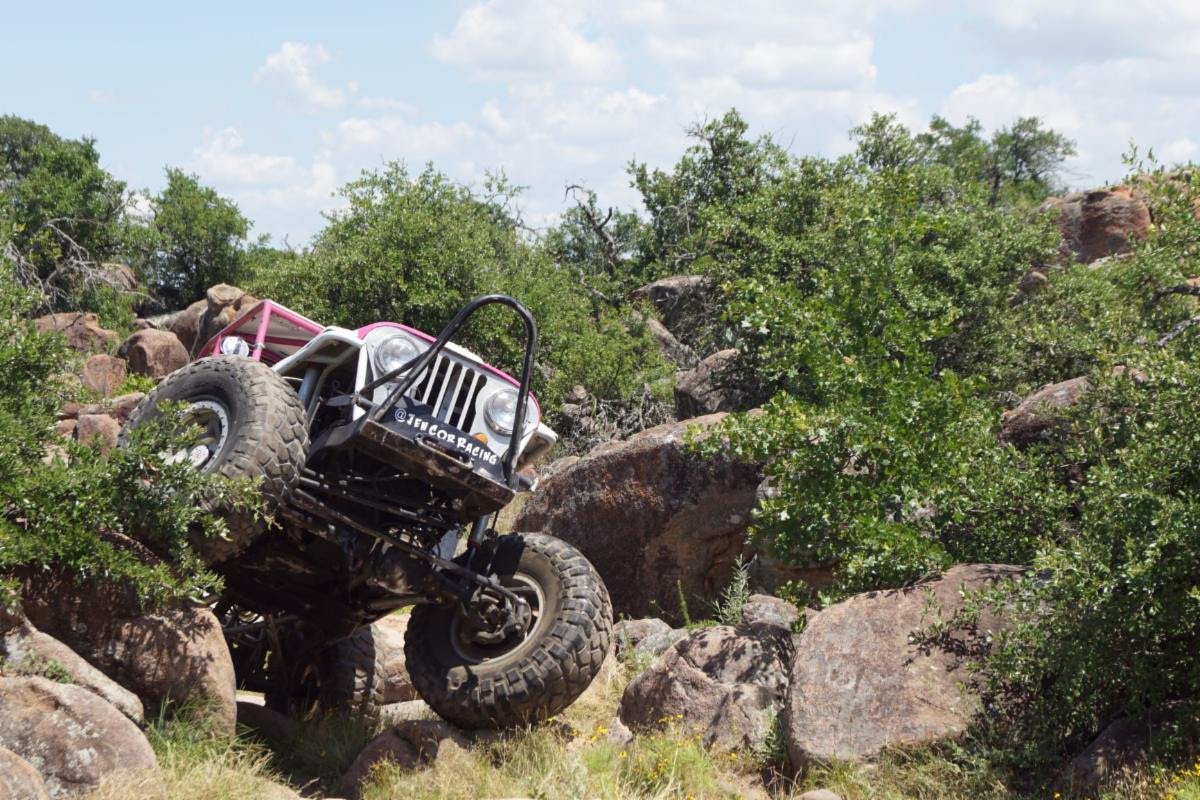 Sportsman A was a runaway show with Steve Marquardt ending with the best scores of the weekend. Michael Hagood joined us for the first time and became a casualty at the start of Day 2.

The ProMod class found Chris Mercer at the top of the podium. Chris and family drove down from Craig, Colorado. It was 20 degrees the morning they left, and they got stopped by a snow storm on the return. I can’t imagine the shock to their systems with a hot, hot weekend thrown in there. The 92 broke early on Saturday, a quick repair saw them back on the course schooling every course except the dreaded A4 – Big Rich really put the ProMod cars through their paces this weekend.

James Dunham took home 2nd, with spotter Paul Beach in Ryan Maxfield’s old ProMod. Ryan sold the car to build a new Unlimited (we’ll see him in Cedar City in the new car.) It was great to see a competitive car with a new driver. 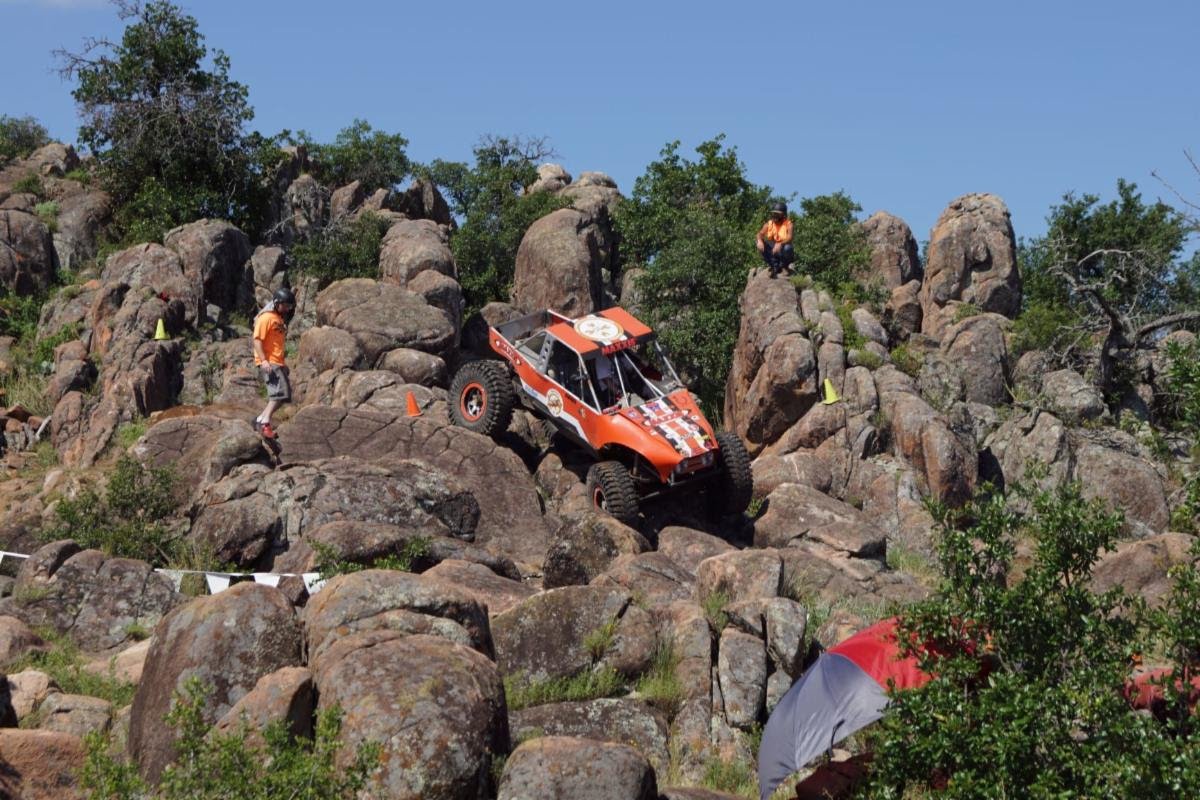 The rest of the scores in ProMod, don’t really tell the story. There was a lot going on. Brian Gray had a busted electric water pump, independent of the engine, two local replacements weren’t getting the job done, it’s a specialized part, so he challenged himself to complete the courses before his engine temperature hit 250. To do that, he went without his spotter, Vince Gochenour, so he could smash and crash through the courses fast without putting Vince at risk of being in the way. But in limited time, and with no spotter, he might have tagged a few too many cones along the way. It was a valiant effort, trying to complete a course in about three and a half minutes.

Virginia and Chris Foster traded driving duties depending on the course, her purple 907 is big and unforgiving, reminds me of a puppy, when it decides it’s not going anywhere, it’s not going anywhere! Virginia’s rock stacking abilities impressed everyone when she grabbed a log from off course and RAN with it to build a bridge on A2. Apparently, here COVID-19 training continued. The rest of the competitors were grateful for her bridge building.

The 4417 was back in action on the rocks, Damon Hopper competed in the Sportsman class in 2018 for the full season, he wanted to try a Pro class, so he stepped up to ProMod for this event. It was great to see that car back on the rocks.

It felt like the first event of the season, the drivers seemed to be experiencing some competitive rust getting started, that was most evident in the Unlimited class. We had five Unlimited drivers who had already started the year with us in Bagdad, so many months ago. George Zoros had a roll on Saturday that didn’t appear that harsh, but was enough to crack his frame on the buggy. Sometimes cars and drivers are in sync, Kalif Redden told me he never felt that way this weekend, he struggled with the new rocks this weekend. A little more evidence that the last few months have been long.

Laurie Gray picked up an older Jesse Haines fab car with rear-steer. This was her first time out without her drag-axle car and she performed well. Her spotter, Vinny G. hadn’t spotted a rear-steer car since Tom Campbell’s buggy a few years ago. Both were learning as they went. We always consider Jacob Reeves as a kid, since he started with us so young, but his height should remind us how he’s grown. After a tough Saturday, he rallied to make it on to the podium by end of day Sunday. 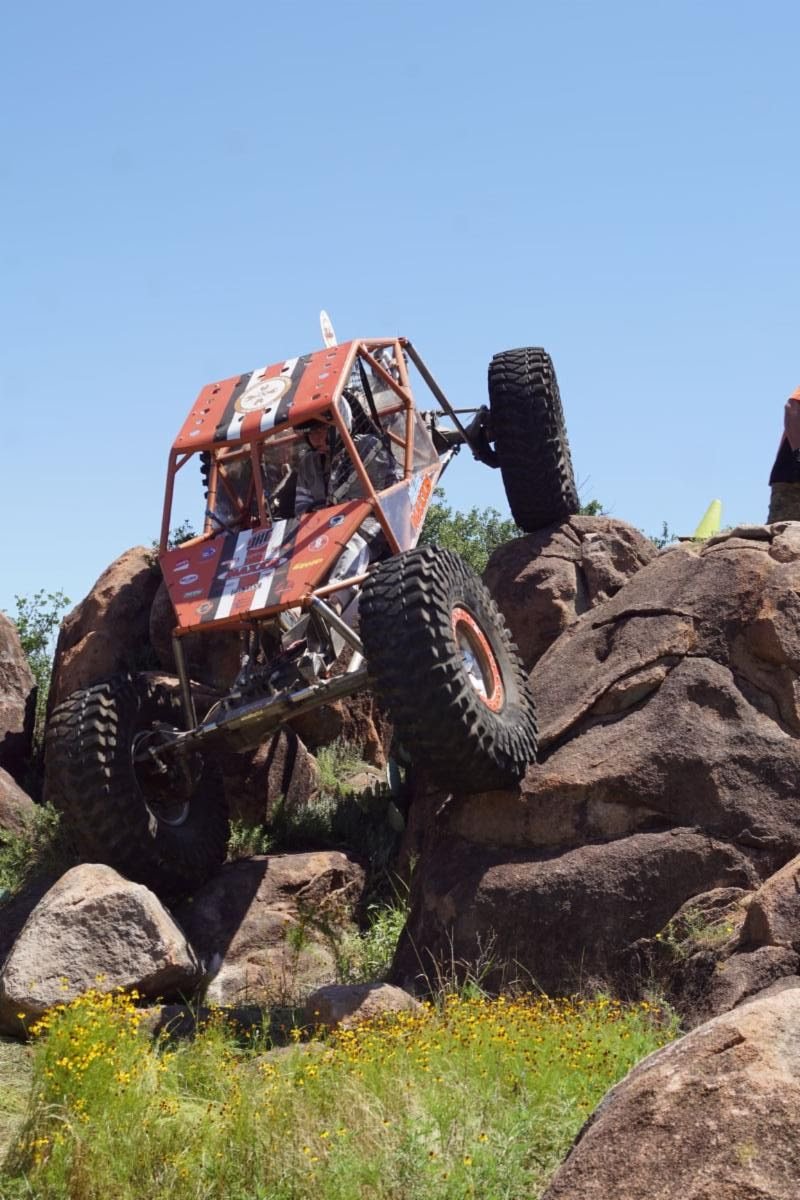 The two cars who rode out together ended up on top for the Unlimited class this weekend. Cody Waggoner and Randall Davis in Pretty Penny had an almost perfect day on Saturday, with just one reverse and no cones all day. They strategically had not taken all the bonuses, but enough to give them a commanding lead going in to Sunday. Sunday had them neck and neck with Craig Allen making progress toward the top spot, but falling short by just 27 points in his first showing in the Unlimited class. Craig sold his ProMod the day after the Bagdad competition to step up into Unlimited. It is great to see friendly, fierce competition.

Because of the heat, the competitors had decided not to do a Shoot-out before the competition began.

W.E. Rock is back in action in the west at Cedar City, Utah on July 11 and 12; and in Rausch Creek, Pennsylvania on July 25-26. Join us for some great action on the rocks. 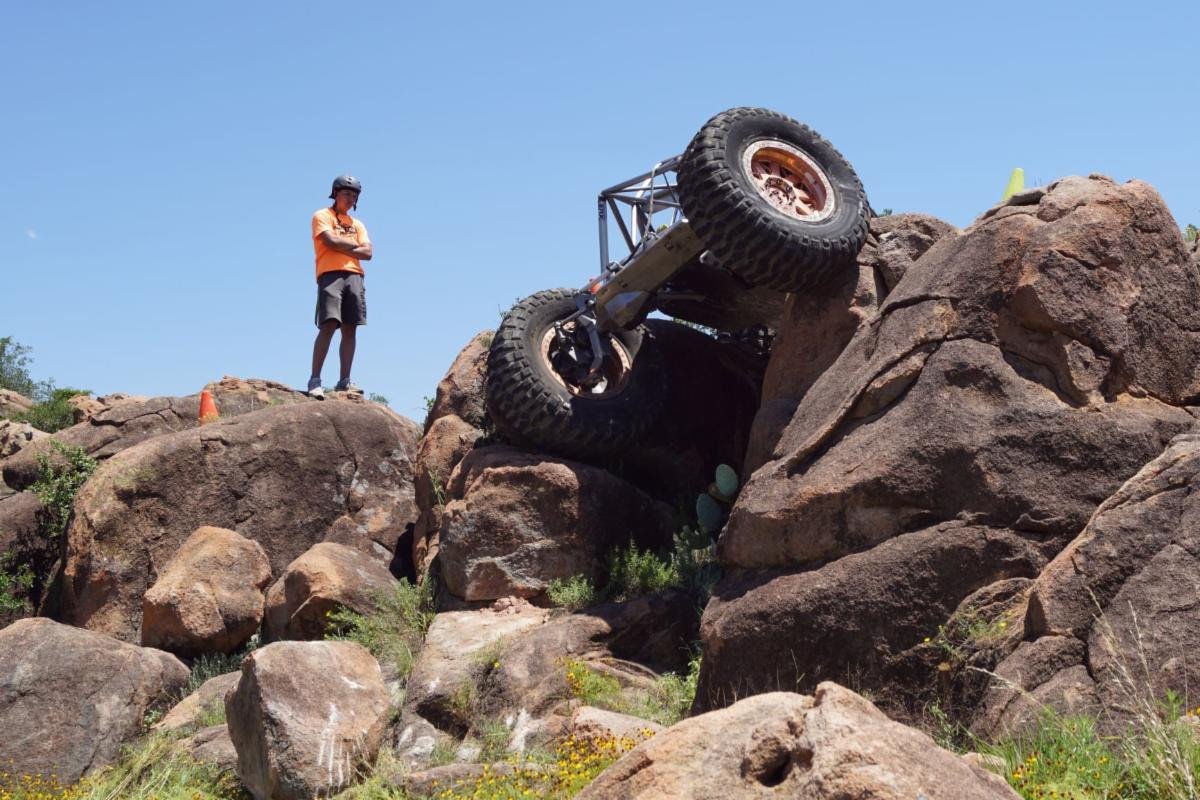 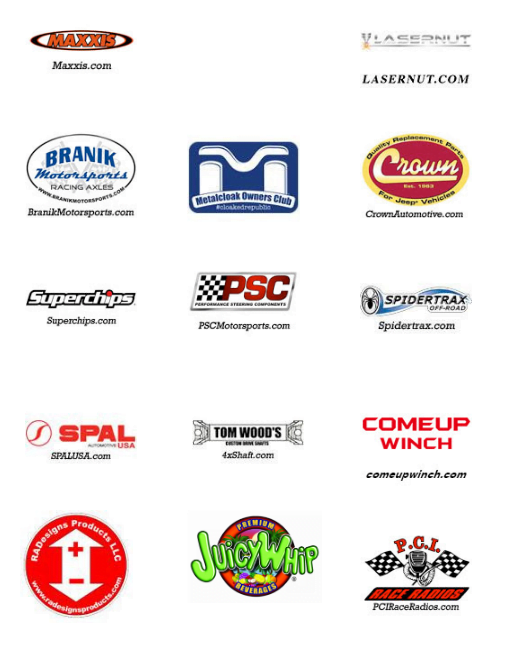 The sport of World Extreme Rock Crawling or W.E. ROCK as it is known to our fans is all about challenging driver and machine. Competitors build amazing vehicles to drive over the most extreme obstacles our world renowned course designer can dream up. You will see vehicles perform maneuvers you never thought possible. Conquering large boulders, steep climbs, rock ledges and massive drops, all while avoiding strategically placed cones. Depending on the class the competitors choose to compete in their vehicle must follow some basic build rules and safety requirements. The rules are designed to keep each class fair while allowing the builder freedom to engineer the most competitive vehicle they can. Once on the course the driver and spotter have 10 minutes to navigate 3-4 gates (set of cones) without hitting any cones and as few backups as possible. Each cone hit or backup they take adds points to their score and the team with the lowest score wins. The courses are designed to provide the most action for the spectators throughout the weekend and force drivers to push what they have built to the limits. For more information, visit www.werocklive.com