Every year thousands of short course racing fans come out to the small town of Crandon Wisconsin to see an epic weekend of racing where the sports best drivers compete to become a Crandon World Champion and win the Amsoil Challenge Cup that pits Pro 2 against Pro 4 drivers. 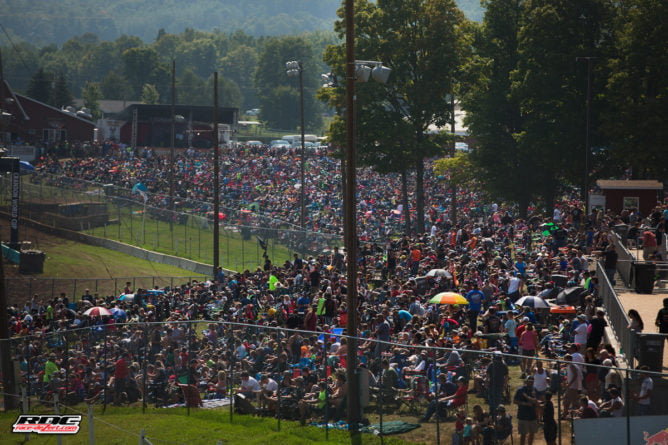 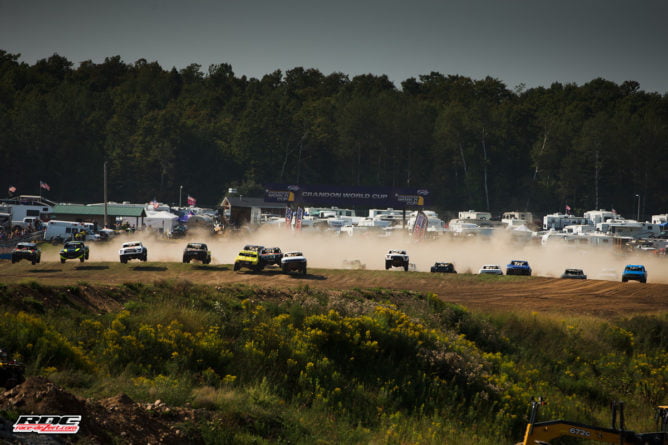 This year an estimated 50,000 fans came out in full force to cheer on their favorite drivers. Anticipating the growth of the event Crandon International Raceway added additional grandstands and built 200 more campsites making a total of 2200, all of which sold out before the weekend even started. 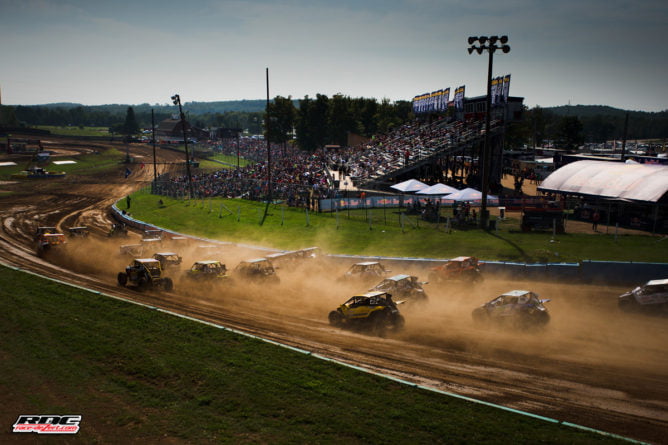 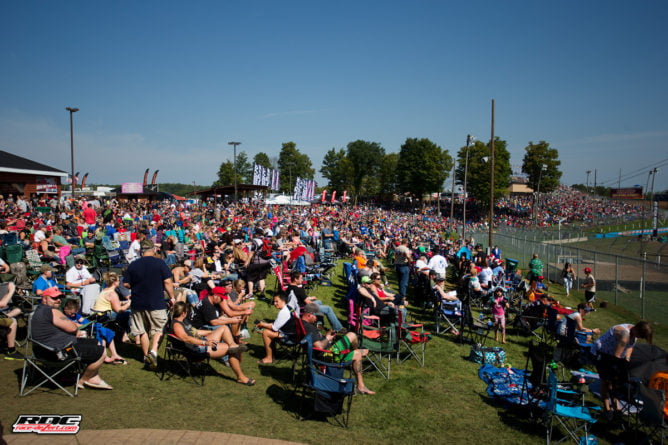 The weekend is full of racing that all build up to Sunday where Crandon World Champions are crowned in each class and where one driver gets to hoist the Amsoil Cup in the Pro 2 vs. Pro 4 race where everything is left on the track. 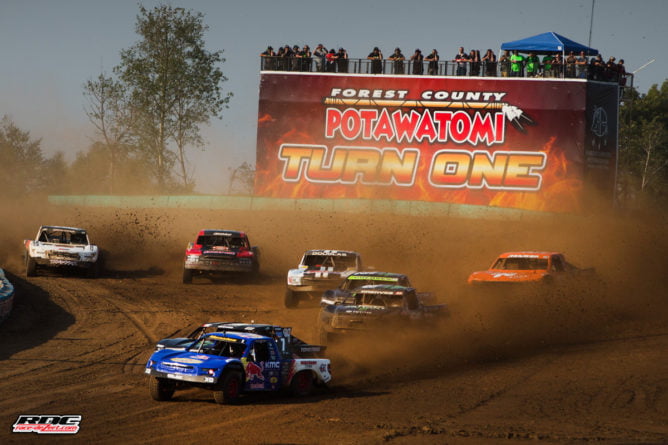 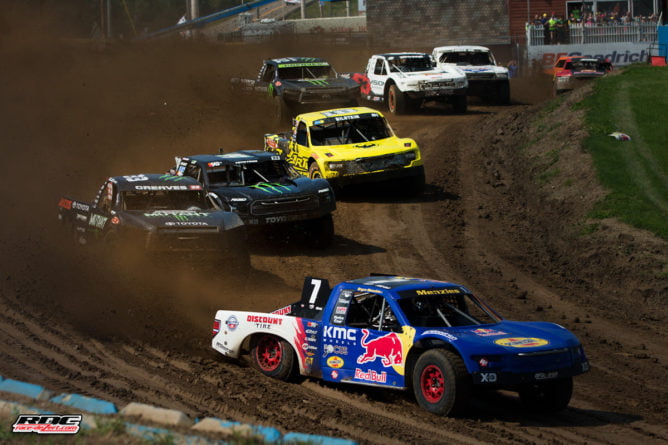 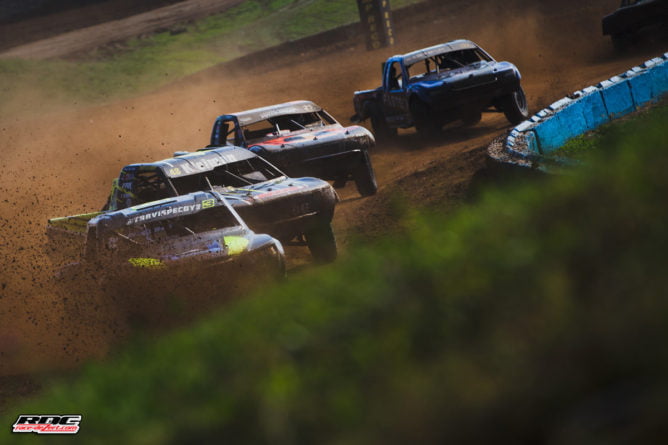 In the Prolite race Ryan Beat took the hole shot down turn one with 20 others hot on his tale. While this was Beats first time racing Crandon he made it look easy as lap after lap he kept growing his lead over the rest of the pack. The mandatory yellow bunched all the racers back up but Beat got another good jump and kept his lead. 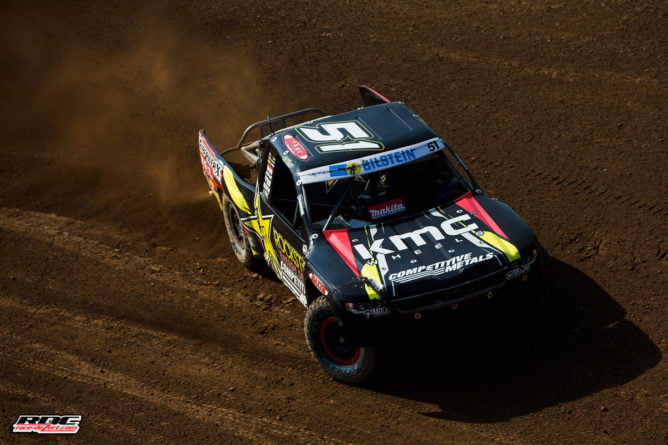 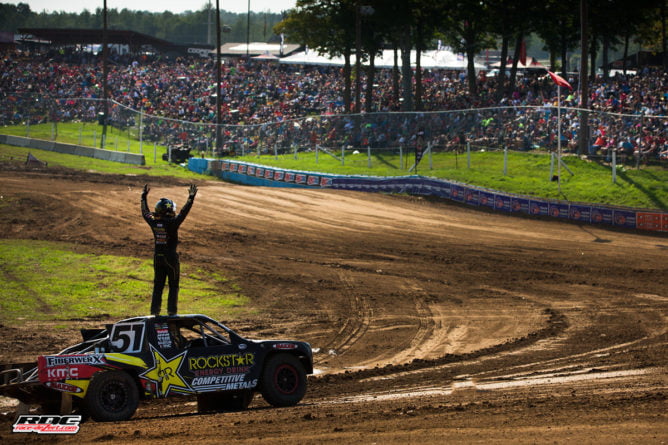 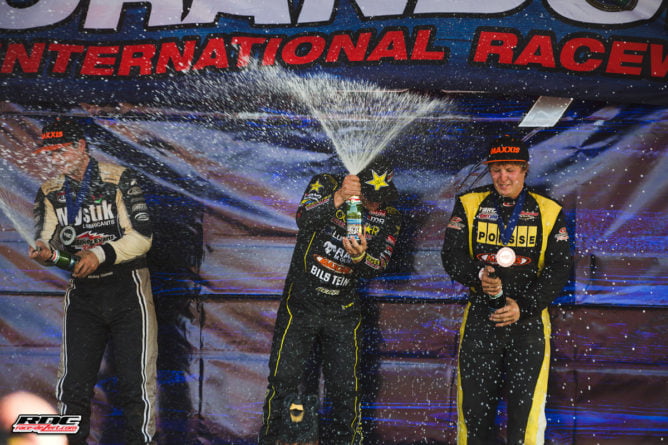 Mickey Thomas, another west coast translate worked his way up the field during the race showing moments of gaining ground on Beat but it just wasn’t enough and Beat took the checkered flag first. With the win he took home $5,000 from FOX Shocks and another $10,000 from the raceway. 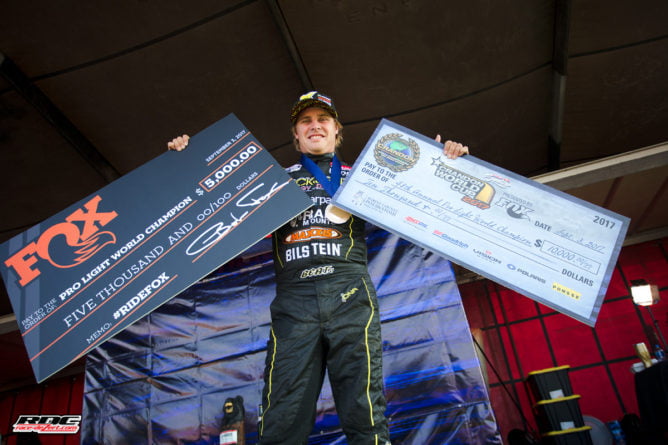 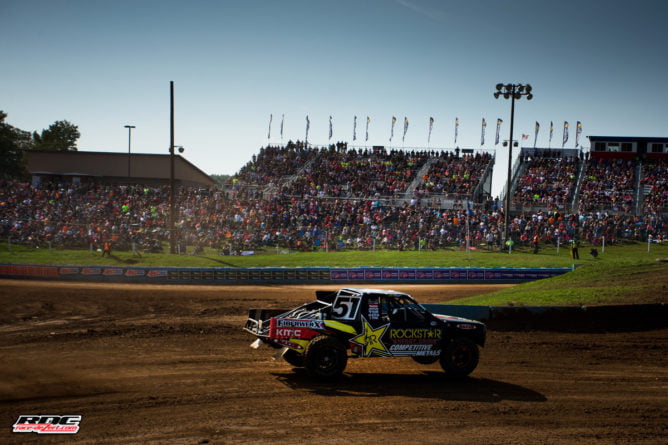 In Pro Buggy just one LOORRS driver, Sterling Cling made the trip out East and he did what Beat did and lead from green to checkered.

The main story from the race was Bryce Menzies. Not only did Menzies win the opening race of the day in Pro 4 and again the Pro 2 race which pitted an East vs West race on its own, but he took home the win in the biggest short course race of the year, the Amsoil Challenge Cup. 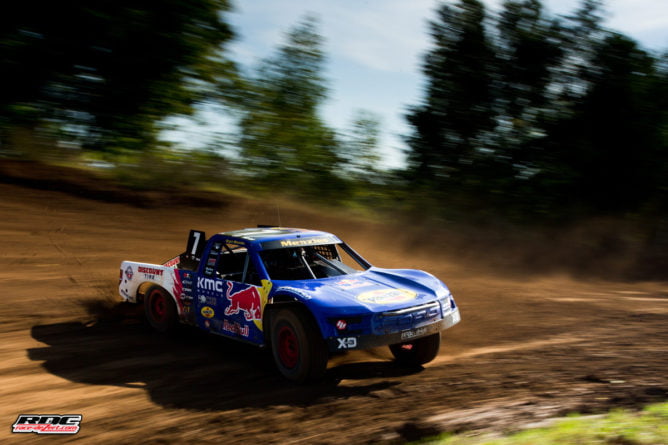 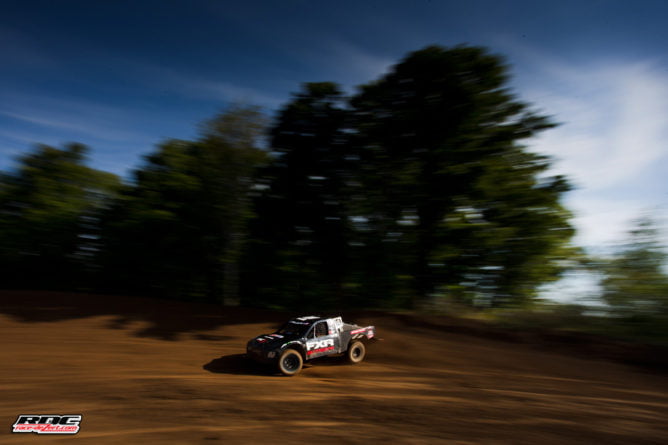 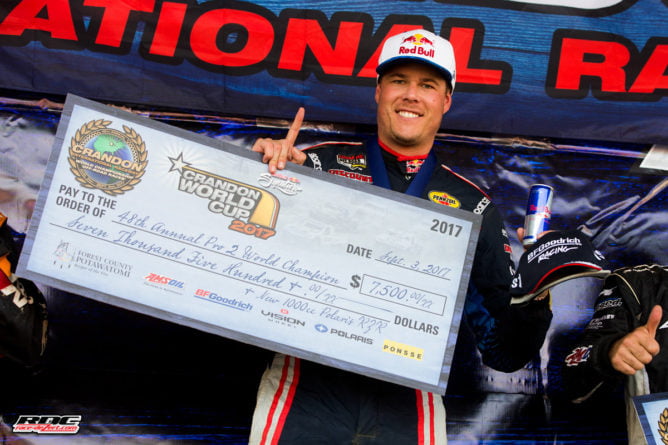 With different rules between the TORC and LOORRS Pro 2’s, this year was the first time there were three green flags for the race. First the TORC Pro 2’s started, followed by the LOORRS Pro 2’s, and then the big boys, the Pro 4’s. 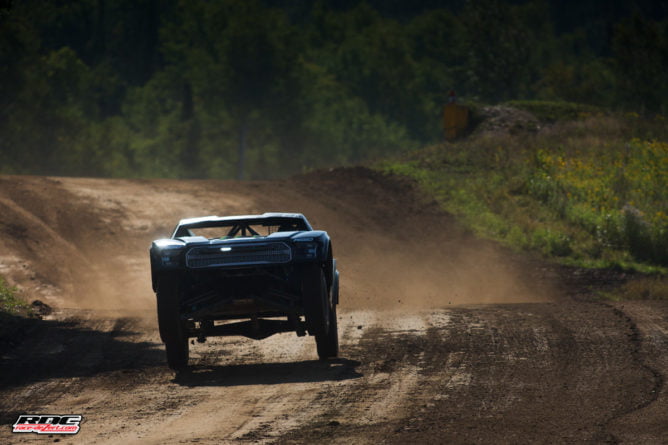 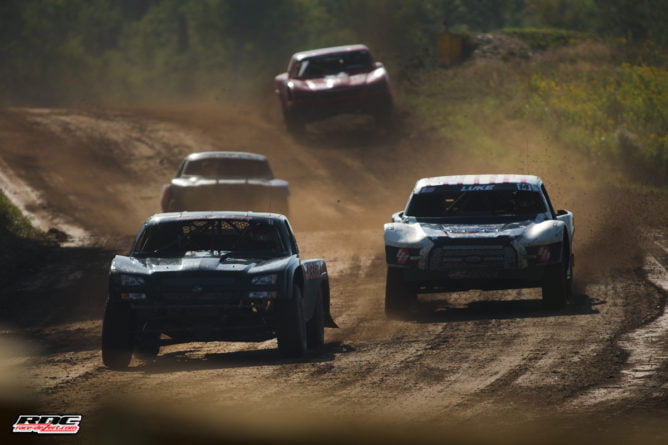 Andrew Carlson who only started racing Pro 2 in TORC a few races ago has been on a tear there, and got the early hole shot to lead out the race. Patrick Clark and Eric Fitch started in the second group and it was Fitch who got the better end and began leading the way to chase down the east guys. 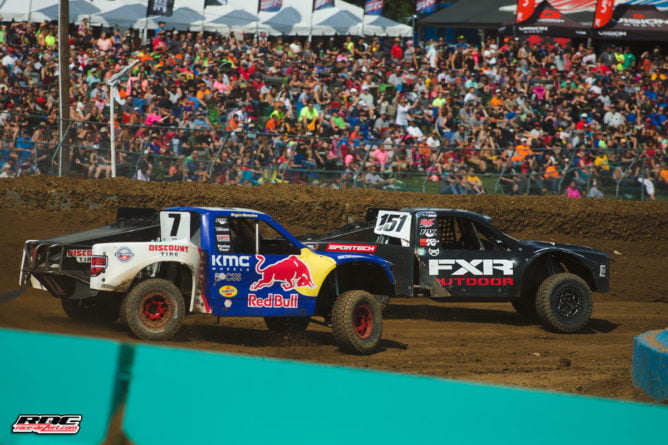 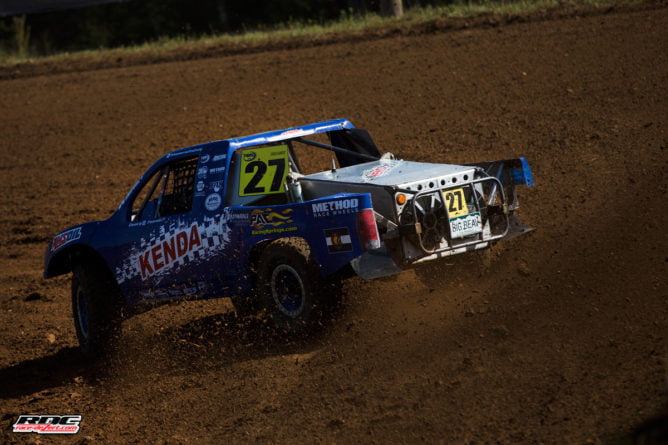 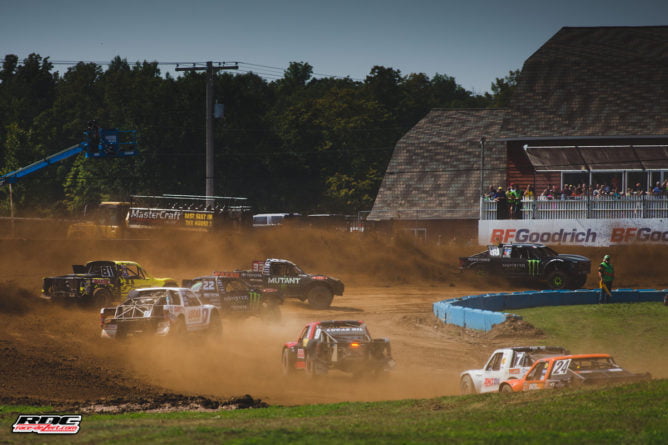 Pro 4 was the largest field and was filled with the who’s who of Pro 4. Bryce Menzies, Kyle Leduc, The Greaves, Keegan Kincaid among others waited at the line while the Pro 2’s were already almost a lap in. (Carl Renezeder did not race due to a injury suffered in the morning race, and Doug Mittag popped a motor).

Finally the Pro 4’s got their green flag and the war was on led by Bryce Menzies who got the holeshot with Kyle Leduc right on his bumper going 100 mph down turn one. Lap after Lap the LOORRS Pro 2’s got closer, and the Pro 4’s even closer. 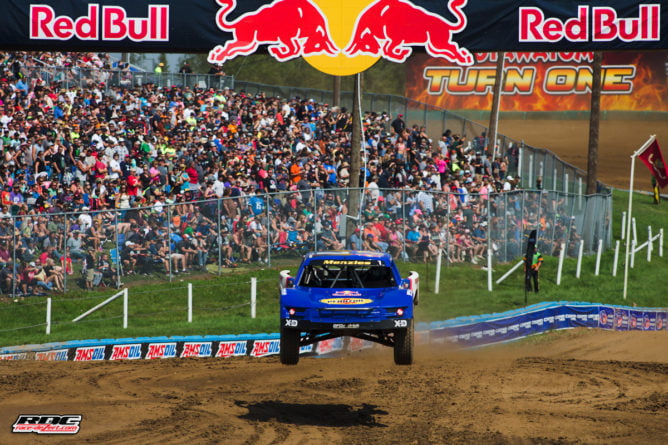 To figure out the time gaps between the three different starts, lap times were looked at from all races, qualifying and practice sessions to find the best intervals so that all three groups would be intertwined in the last few laps. The reason for that is to give the Pro 2’s a chance to hold the Pro 4’s off, and also make for an exciting end to the race for the fans. 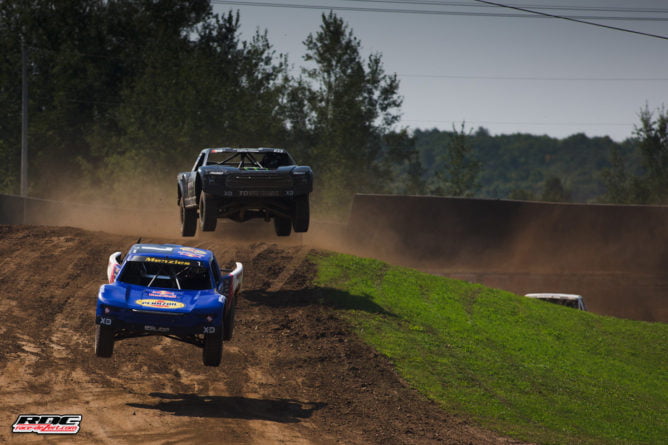 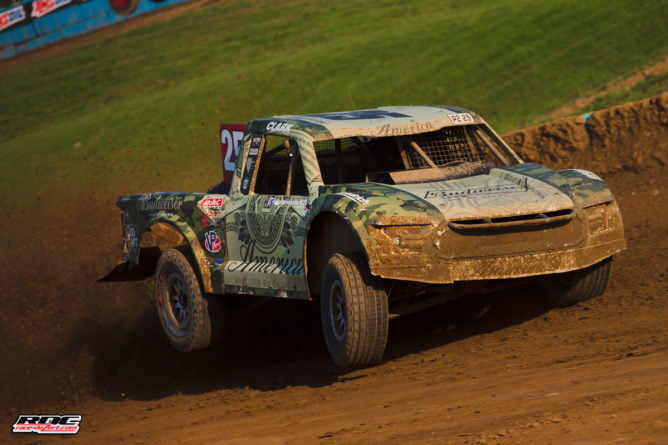 Lap by lap the distance between the lead vehicles in each pack got smaller and smaller. Carlson maintained his lead up front, Fitch was gaining track position on him, and Menzies, Leduc and CJ Greaves starting picking up Pro 2’s like they were standing still.

Greaves had a mechanical issue late in the race which really left Menzies and Leduc to battle it out in Pro 4. Carlson did a great job running clean and holding off Bryce and Kyle for most of the race, but with about 3 laps to go both got around him and the real race started. 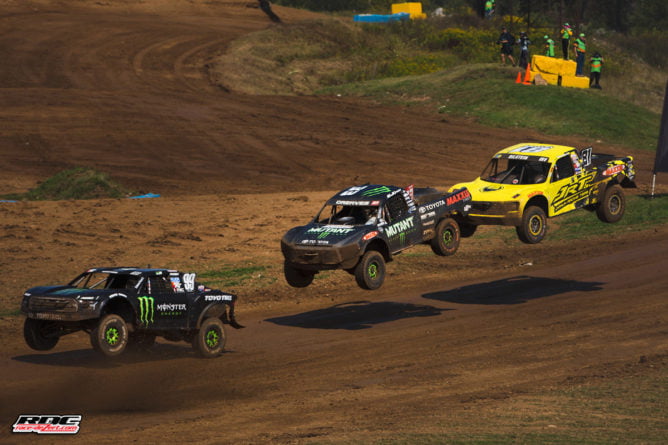 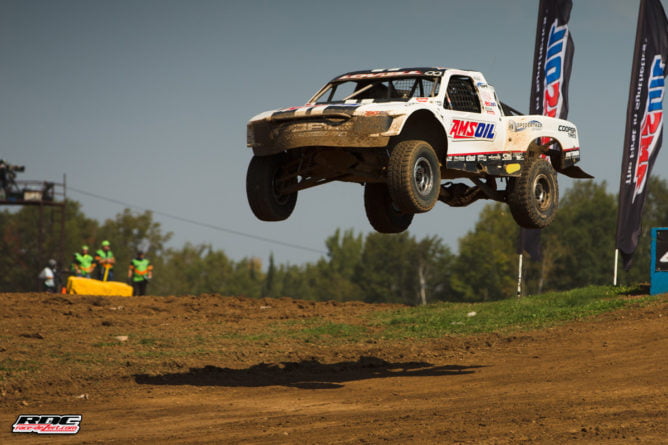 Menzies had lost his brakes on the third lap but was still able to keep off the hard charging Leduc, who numerous times put his front bumper on the rear of Menzies but just couldn’t find the extra gear to make a pass on Bryce. Like earlier in the day Menzies was a man of few mistakes and in the cup race where it matters he made few.

After the white flag signaling one lap to go, Leduc put it in an extra gear trying his damnedest to get around Menzies but Sunday was just Bryce’s day. 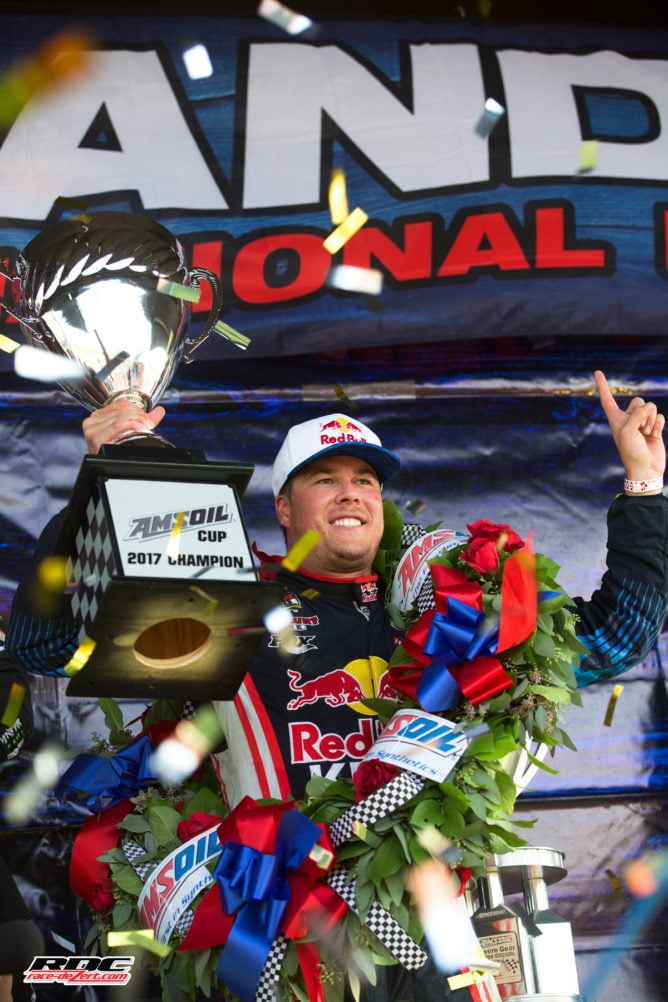 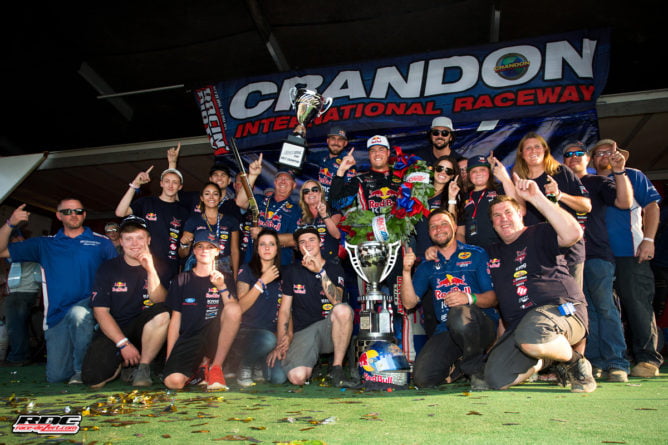 With the biggest one day purse of any off road race, the Crandon World Championships made Bryce a happy man. In all Menzies will take home $63,000 in cash and two Polaris RZR UTV’s with his three wins today. 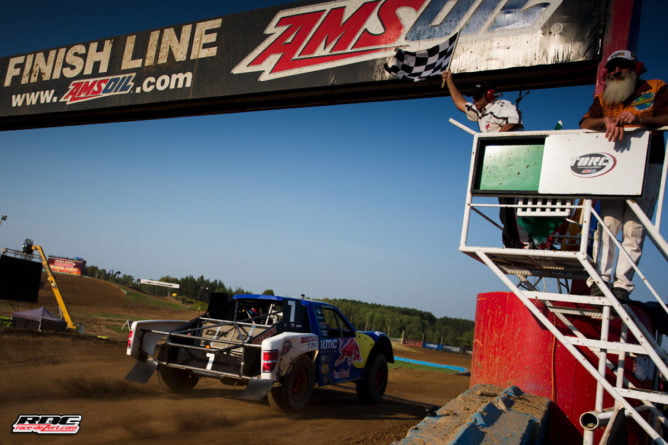 This is our Super Bowl, Indy 500, Daytona 500, and Baja 1000 all wrapped into one and with the improvements Crandon and Marty Fiolka has put into the race and the involvement of RedBull TV its pace is only going up. 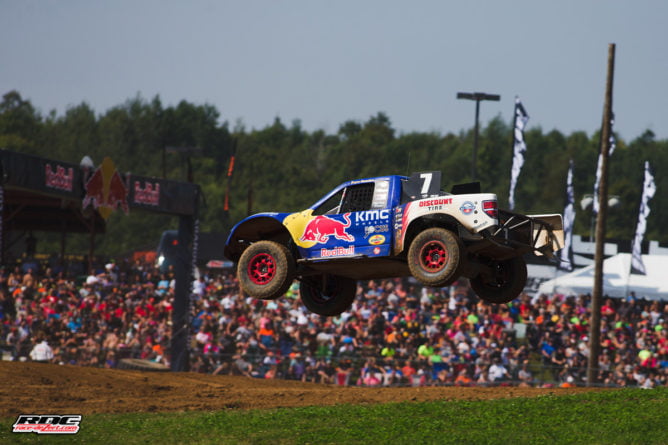 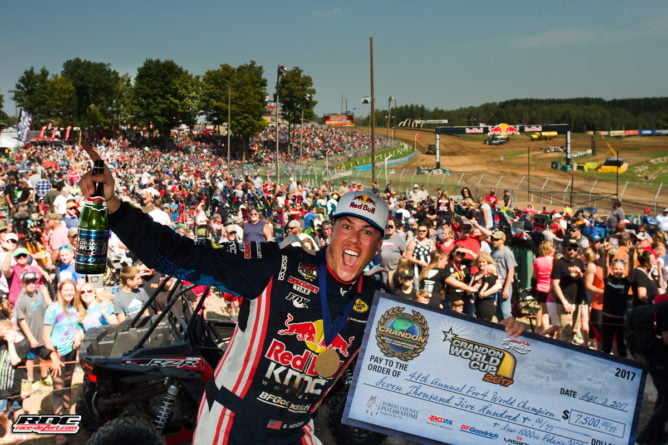 Its 364 days until next years World Championships, will you make the trip out?