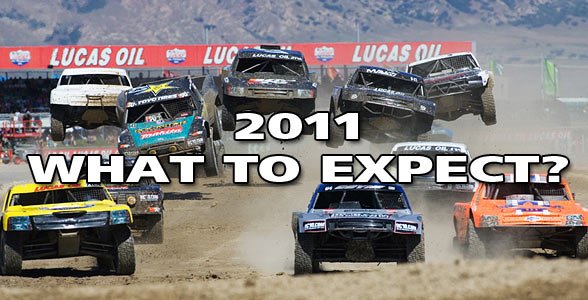 The Lucas Oil Off-Road Racing Series kicks off on Saturday March 19th at Firebird Raceway in Phoenix, AZ. There’s been a ton of changes from last year so here are the drivers to watch.

Rick Huseman #36 – he dominated the Pro 4 class in 2010, winning 10 of 15 races. Expect Rick to be on top of the podium again this year as he’s only getting better and his #36 machine only gets faster.

Kyle Leduc #99 – second place finisher in the series, Kyle has been racing smart and fast. His truck has been dialed in and you know he has a shot to podium every race.

Adrian Cenni #2 – the “Wildman” is always a threat; either he’ll go balls-out to podium, or he’ll DNF taking half the field with him in a blaze of glory.

Johnny Greaves #16 – the TORC Series Champion, Johnny is guaranteed to be at the head of the pack. Switching tire sponsorship this year, Johnny is now on Maxxis. If he podiums enough at Lucas, you can expect to see him race, otherwise he’ll probably only race the TORC Series.

Travis Coyne #5 – he finished the year strong, getting to the podium in several of the final races of the year. Look for him to put up a strong showing.

Todd Leduc #4 – after a solid rookie season in monster truck racing, Todd is now stepping up to the Pro 4 class, to race alongside his father and brother. He just needs to remember he can’t drive over his competition like he could in his monster truck as he get’s used to the four-wheel action.

Carl Renezeder #17 – he had a tough last season, as he either made it to the podium or DNF’d. Carl’s program is always top notch so you can expect him to be in the hunt.

Ricky Johnson #48 – moving up to Pro 4 from Pro 2 this year after winning the TORC Series in Pro 2, RJ is fast, but can he pull the same results in a new class? Racing with the Menzies Red Bull Team, hopefully RJ will race more often in the Lucas Series, but his loyalties to the TORC Series will probably rule him out for a lot of races later in the year.

Rob MacCachren #1 – the 2010 season champ, if Rob Mac get’s into the lead, say goodnight, because you’re not going to get past him. He runs the cleanest lines and should continue with his winning ways.

Carl Renezeder #17 – Carl had a stronger showing in Pro 2 in 2010, but he couldn’t match the consistency of Rob Mac last year. It’s a solid bet that he’ll make the podium this year in Pro 2.

Rodrigo Ampudia #36 – after a quality year on a bum knee, Rod Amp is healthy this year and looking to push the older guys off the podium and himself into the spotlight. Look for his Papas and Beer

Robbie Woods #99 – he started 2010 with a number of spectacular crashes and finished it with several podiums. Robbie seemed to figure out how to race smarter as the year went along and proved that he had the right stuff going into 2011.

Greg Adler #10 – Greg had an up and down season in 2010. He was consistently fast in qualifying, but come race time, trouble always seemed to find him. He had a couple of quality podiums in 2010 and if he can keep clear of traffic he should be able to find a few more this year.

Jeremy McGrath #2 – joining the Stronghold Team for the full season in the Lucas Series, Jeremy had some great wins in the TORC series in 2010. This year he’s on Toyo’s and in a new truck, so we’ll see how long it takes the motocross legend to get up to speed.

Bryce Menzies #7 – featuring a new deal with Red Bull, Bryce had a strong showing in 2010 with multiple podiums. You can expect him to be fast, but no one is sure how many LOORS races he’ll attend since he has a commitment to the TORC Series.

Brian Deegan #38 – the General was a pleasant surprise in the few races he entered last season in Pro 2. He was fast and had several 4th place finishes. As he gets acclimated to Pro 2 racing, he’ll be looking be looking to push some of the big names out of the way.

Marty Hart #15 – the Pro Lite champ is moving up to Pro 2 this year and is racing for Johnny Greave’s team. Marty’s an all-around good-guy, so we hope he get’s up to speed quickly and can get in on the action.

Casey Currie #2 – the 2010 TORC Series champ, Casey is now racing on General Tires and is looking to grab some wins in what’s shaping up to be a competitive field in Pro Lite.

Chris Brandt #82 – last year’s runner-up in Pro Lite, Chris was usually a top 3 finisher in 2010. If he can avoid trouble he should be able to make the podium.

Brian Deegan #38 – he’s most likely racing Pro Lite and Pro 2, so we’ll see which one he pours more sweat and tears into. The General is fast in his RockStar Metal Mulisha Pro Lite, but he was inconsistent in 2010, and had a number of DNF’s.

Matt Loiodice #20 – had a very up-and-down season in 2010. He was often running up front, only to run into problems and drop back to the pack. That said he still had a number of podiums and if he can keep his Pro Lite healthy he should have some more this year.

Rodrigo Ampudia #36 – only ran a few races in 2010 due to a knee injury that forced him to cut back on the number of races he could enter. We’ll see what he can do this year running in Pro 2 and Pro Lite.

Kyle Leduc #99 – back running in the Pro Lite class after only running in Pro 4 the last few years. Look for Kyle to push the action and be in the lead.

Cameron Steele #16 – after winning the Pro Buggy Championship in 2010, PAB has joined the Stronghold team to race in Pro Lite.