Now that the 2015 Dakar is in the books, and we got a few nights of solid sleep, the sheer magnitude of what we experienced is settling in. Going into the event, we based our expectations on previous TV coverage, news articles and personal conversations with seasoned Dakar veterans. However, those ideas of what it would be like were grossly overshadowed by its true dimensions. There were many jaw dropping moments during the past two weeks.

It may sound cliché to say, but the Dakar is the Olympics or “Copa Futbol” (World Cup) of off-road; a true international event that not only attracts athletes from various continents and nations but also spans over three nations that requires four international border crossings for all participants as part of the race course. If a country is somewhat modern and sells, markets or manufactures cars, a team was probably representing that nation at the Dakar. 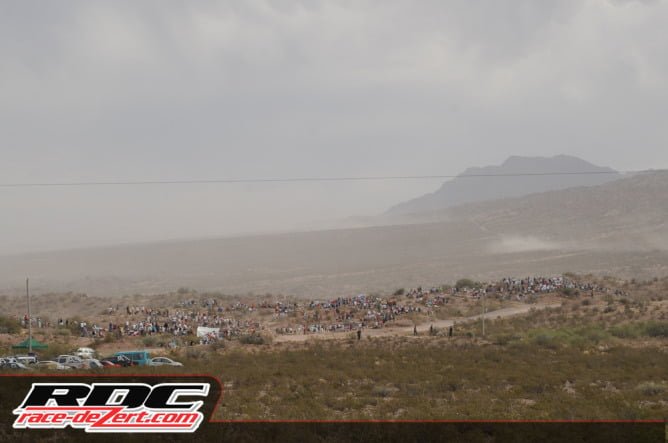 The amount of local military, customs and police collaboration was impressive. Any populated area the course passed through was not only heavily guarded by those safety organizations to assure uninterrupted movement but also crowded by race fans. Either the race fans read in the local newspapers and Dakar.com where it’s okay to spectate or they simply made the correct assumptions where the vehicles would pass by.  At times, there were tens of thousands of race fans lining the streets waving or holding up signs and flags. Any liaison stage resembles the ride of the presidential motorcade, and the locals simply want to have a glimpse of the passing vehicles while police close off side streets and wave everyone past traffic lights. Since our press vehicle had Dakar livery many may have mistaken us for a race car, or they simply celebrated every foreigner as part of the race. We like to believe it was the later of the two.

Similar to what we see in Baja, many fans travel along some of the stages. They camp next to the course with friends and family creating a party atmosphere while watching their racing heroes speed by. We witnessed many race-course bbq’s full of families enjoying the festivities of the day. 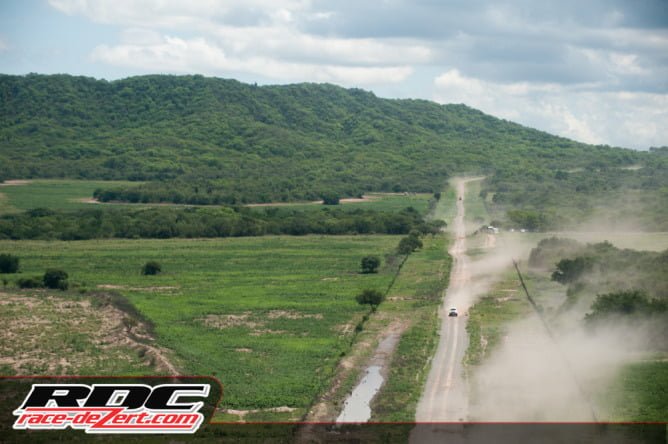 What makes this race the toughest Motorsport event in existence is the duration. Every one of those thirteen daily stages is comparable to a Baja 500. Some days are tougher, while an easy day could be considered a Silverstate 300. The race course consists of everything from  rally style roads, Baja style desert with hard packed sands and small rocks, and powder soft sand in dunes that make Glamis look like a playground sand box. Elevation goes from near sea level to altitudes of 4,500 meters (14,764) where the lack of oxygen slowly becomes a health risk. All of this gets driven in the same exact race car, where tire size and type have to remain unchanged throughout the entire race.

The temperature changes are even more drastic than the elevation changes.  During Stage 2, the heat ultimately overcame one Polish rider and consequently cost him his life. Later in the rally, at high altitudes we saw freezing cold temperatures. 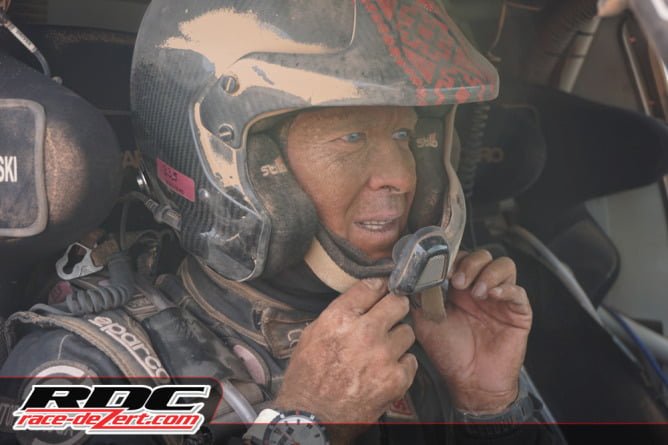 Driving any single one of theses stages appears easy on paper, and a Class 11 car could master all (most) of them, but doing it day after day is what brings a team into DNF territory. Day-by-day, all of your team advances alongside with the route and sets up camp at a new location. All support vehicles travel as much as the race cars. Some support vehicles break down and force the teams to adapt new strategies of logistics. Crew members and drivers get sick during the rally and may not only become useless but add an additional strain to their efforts. After fixing damages for the day and performing maintenance, crews go to sleep for a few hours in sleeping bags and tents, just to do it all over again hundreds of miles further in perhaps a different country and climate the next day. 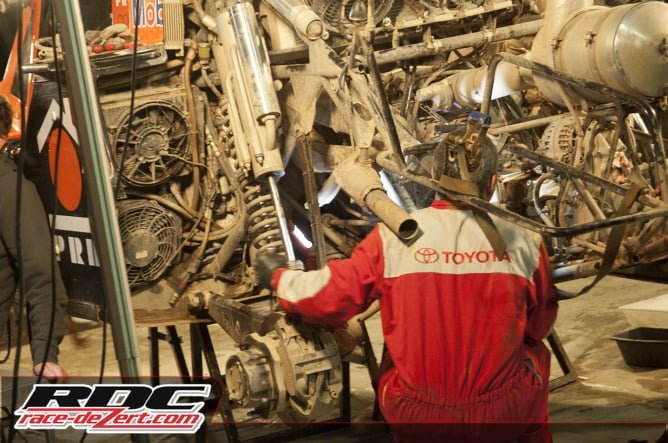 Sleep deprivation, time management, and logistical planning make or break a team. Obviously, racing in Baja is a team sport but the preparation process for Dakar is much more controlled.  For example, a properly tightened a-arm fastener may get checked by two or three people, while in Dakar that serviceable item will only be checked by one crew member that is perhaps awake for twenty hours straight on two hours of sleep from the previous day.  Everything is much more extreme than what we are used to and only the very best crew and drivers stand a chance to even finish this race.

For a U.S. team to run at the very top and compete against those unlimited budget teams like Peugeot or Mini, it’s an uphill challenge as Robby Gordon has demonstrated again this year. He is a privateer team, and even Robby himself takes on the role of vehicle designer, lead crew chief, team manager and driver all in one.

While the Al-Attiyah’s of this sport relax in resort hotels near the daily bivouac, Robby is hands-on in making sure his show carries into the next day. Now, look at the results, this American team delivers and realizes it’s the story of David and Goliath.  Robby operates at a fraction of the top teams budgets but always represents a viable threat. 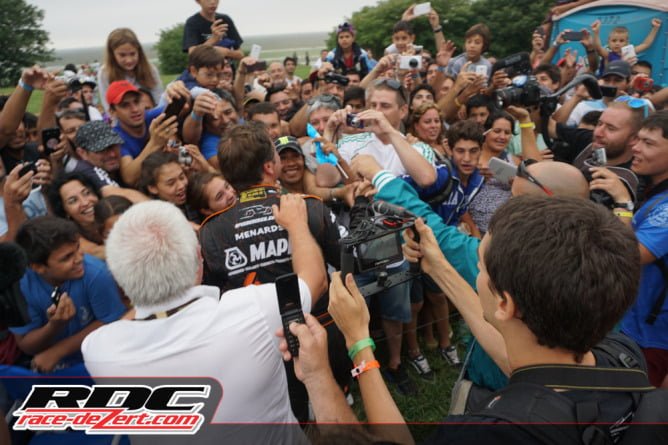 In one regard, Robby is lightyears ahead of any other competitor in popularity among race fans. He may finish 10th in a stage but the fans scream for Robby at the finish line while a well performing Geniel DeVilliers or Peterhansel may only get a fraction of the attention. The same holds true with the local press. Every single newspaper centerfold we looked at talks about whoever won that day or is expected to do well – plus Robby. He is the only racer that has true fans camping outside the bivouacs fences with banners up hoping for a glimpse or a handshake of their hero.

His celebration drive after the last special to the official formal finish line in Buenos Aires 100+km away was something unthinkable to most of us. Fans swarmed his race car in regular moving traffic, multiple cars wider then the assigned lanes. People drove on the shoulders just to be able to drive next to an overly joyful Robby Gordon. They came up to his car window inches away to fist bump and take selfies. Robby himself did 3-wheel wheelies and burnouts where traffic allowed for it and the fans, overly joyful, approved of any such celebrations at Dakar. Robby may have not won the Dakar but he has won the hearts of the people unlike any other driver. 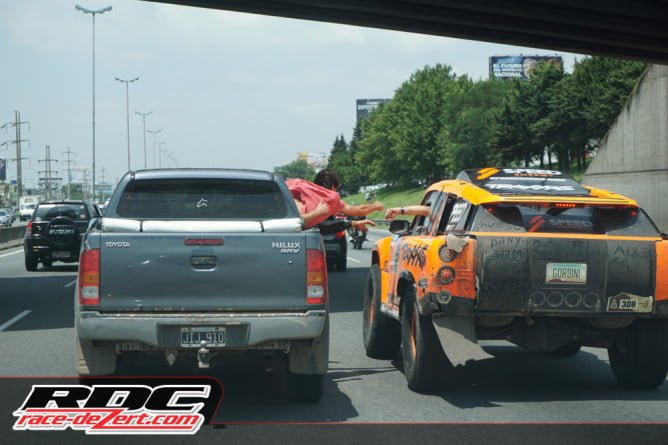 At one point he drove past a small group of kids rooting for him only to pass a big truck in traffic blocking their views. The kids in disappointment threw their signs to the ground. After all, they waited just for this one moment but circumstances denied what they came for. Robby recognized what just happened and quickly jumped the center highway section, spun a wide high speed turn on a grassy embankment and drove back to the fans just to stop, shake hands and make their day.

On another occasion he peeled his 308 race car number off the car, signed it and afterwards posed with disabled kid that cheered for him during the formal celebrations. Many people, including us, got teary eyed witnessing the joy one driver delivered to one little kid. Robby Gordon demonstrated that there is more to racing then the podium and our trip gave us a first hand glimpse into Mr. Gordon’s impressive operation.

We caught a fat donut burnout show in front of one of the Peugeot support crews lined up on the freeway. That video went viral with 6 million views and counting.

Where we in the U.S. have undoubtably some very experienced off-road racers, their true potentials have not been unleashed until they race Dakar. Racing a short 500-1000 mile course in one shot at high speed is respectable on its own but doing it the Dakar way is another story. Racing with no pre-running and only course notes handed out the previous night brings out the true talent and we are looking forward to more US teams joining the fray. Team Gordon has two Gordini’s standing by and is capable of expanding the team to more vehicles. 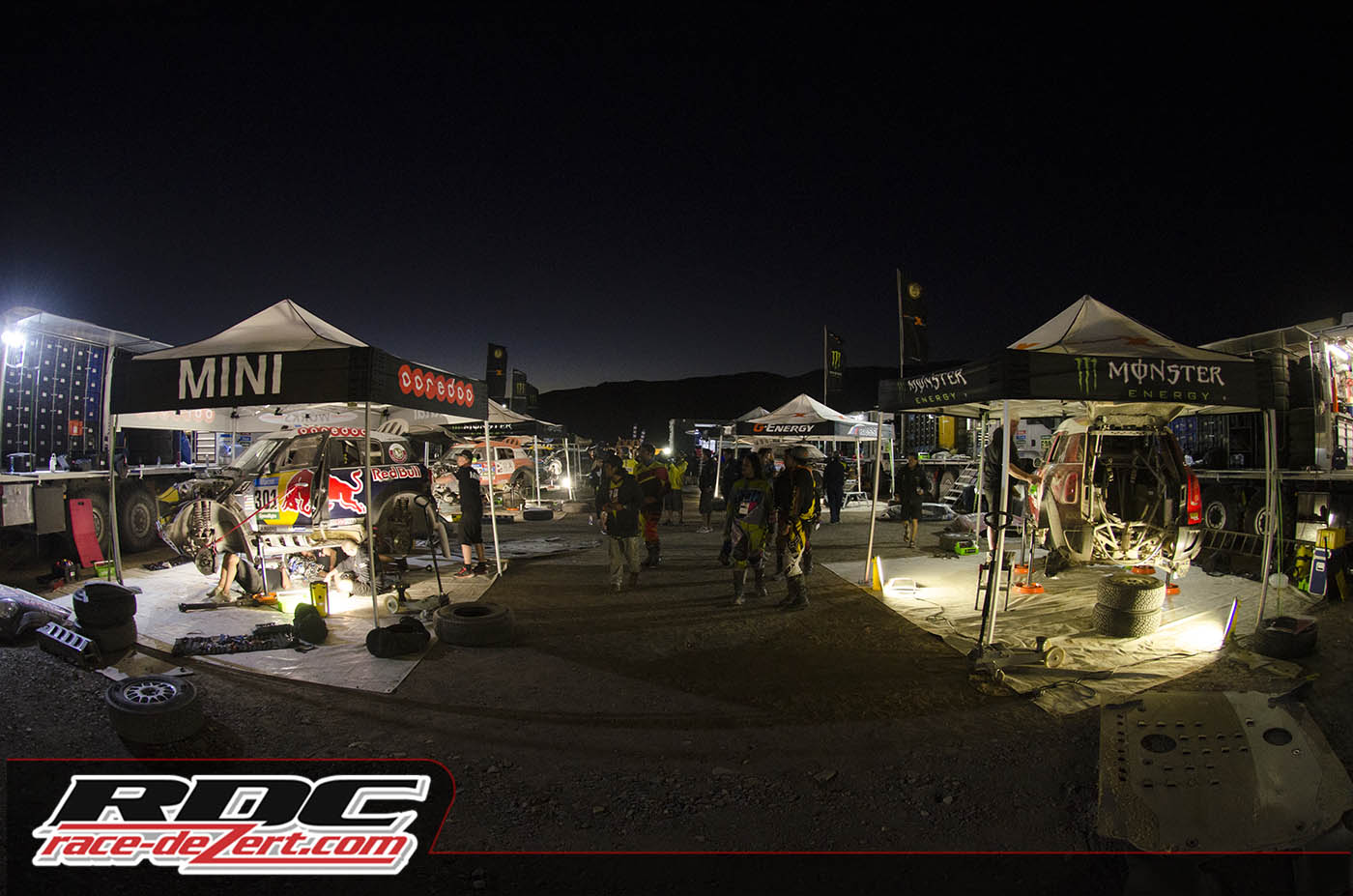 Mini is more or less a rental company where one can show up with the money at hand and race. Racing the Dakar on a top tier program will run an individual no less then 1.5 million Euros (1,706,910.00 USD), but likely more if you have no track record and the team suspects high wear and tear. It seems like a lot of money to ask for, but once you realize how many days of preparation, shipping, logistics and staff it takes you will agree on the prices. For our simple press car to be here from the States, it cost us sixty days of time almost exclusively dedicated to Dakar. 40-50 days for our personal car to be shipped each way via boat. The confidential shipping costs we heard Robby spends exceeds the year long budget of a competitive mid-level racing budget for a limited race car. We could run our Class11 car for a few years on the same money spent just to have one race car and three very large trucks be there. But despite all of the headaches, it was worth it and will now be a regular RDC feature every January.

One night while working in the press center and getting frustrated by heat, lack of power adaptors, lack of food and sleep, one British journalist across from us turned everyones frustration into a smile when he said, “If it would be easy anyone would do it.”  Everyone here on RDC is challenging the off-road community to stand behind and support more U.S. riders and drivers to step up to the ultimate off-road racing challenge and race Dakar. Right now, we are under represented at the Dakar and that needs to change. 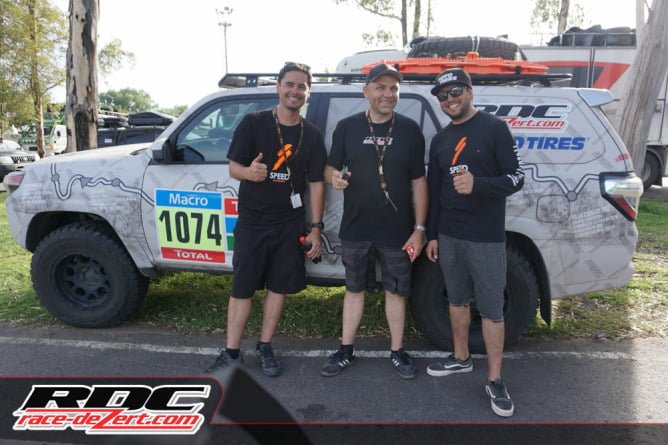 In closing, we would like to thank Toyo Tires, who generously supported our efforts and ideas of a Dakar press coverage this year. They are one of the few companies that put their money where their mouth is and recognize Dakar for the ultimate Motorsport event that it is. Thank you again.

We will expand this story into our forum where Art and myself will answer any questions you may have and share more stories that are beyond the scope of this article. There is just too much going on to put it into words or even to remember in one sitting.

Dakar is a year long event and we have already started our 2016 Dakar by laying out logistics and planning based on what we have learned at our first Dakar Voyage 2015.

K
Klaus Rasch
GREAT GREAT REPORT.
And it was a pleasure to meet you here and share some times and oinions with you.
See you back next year!!!!!!!!!!!

ZequeArgentina
Great article and story.
Thanks for sharing and doing it the hard way!
i enjoyed every second of the coverage, hats off to Klaus and crew!
Great job you guys. I thoroughly enjoyed the Dakar coverage. I find it strange that such a grand event gets almost no coverage in the US but it gets Olympics-style coverage in probably hundreds of other countries. Your reports, along with NBC Sports 30 minute stage wrap-ups were enough to satisfy my Dakar itch. Amazing job and that 4runner is awesome!!
Good read glad you guys covered the story! I was looking for new posts everyday
Really outstanding work RDC. This is the best coverage I have ever seen of the Dakar. So pleased that you were there and could keep us in the loop of this magnificent rally. I really enjoy the reports on the small race teams that make the "character" of the Dakar what it is!!