The Year-Long Motorsports Fast Is Finally Broken in Mafikeng

Somewhere in the 300-kilometer stretch between Johannesburg and Mafikeng – the first bivouac, bordering Botswana – lies the Cradle of Life. A prize among a treasure trove of features South Africa has to offer. For that, if nothing else, this country has been in a constant state of turmoil since the dawn of time as we know it. Fighting for boundaries, agonizing over names and languages and capitals and rights. From tribes to pioneers to tyrants, this land, one of the known origins of mankind, even in an emaciated state has been the forbidden fruit for men and women hoping to stake claim on Eden. The magnitude of this place, and where the event plans to explore in the next six stages, is easy to overlook when your sights are set firmly on the finish line. And that’s ok, because loving motorsports is in and of itself an esoteric experience. One whose values are simple; it doesn’t have to be remarkable. There just needs to be combustible engines, good rivalries and the promise of glory. And that is what the Kalahari Rally has, with change to spare. Scrutineering went as smoothly as a race’s most sedentary day could go. Participants rolled onto a decaying rugby field attached to the once prestigious club, kept very much alive by its neighborhood-favorite pub packed full each night with warm-blooded locals, their spirited children and a lingering cloud of cigarette smoke. Bare feet were as popular a footwear choice among the crowd as the work boot or the sneaker, setting the tone for this intimate off-road tournament and the coming Super Special kicking off the following morning at the crack of 11. By the time competitors reached DSS, it had rained repeatedly already. Enough to keep the dust down, but luckily not enough to change the topography. The storm encircled the qualifying stage, making the lighting dim and the famously golden grass glitter against the rust-colored dirt. Charred earth and blackened shrubs revealed recent bushfires which mercifully hadn’t jumped the roads causing more devastation, or worse, connected with the small villages scattered across the region.

Lightning in the vast horizon created a sense of urgency. Still too far to tell if it was headed this way. But it made for a beautiful scene: blue-grey skies, a faint pastel yellow cutting a distinct line through the divided view. The bare branches of the surrounding flora added accent to the picture. Innocent, virgin territory ready to be defiled by knights in metal carriages or riding plastic armored horses. Touched by a rough throttle hand and held down by a led foot. Leading the charge were the bikes. A little more than halfway down the racecourse, the gap separating riders remained tight, with the forerunners only 30-or-so minutes ahead of the back. Even some in the Adventure category crept into the first wave, but as a unit, their average speed was modest, thoughtful, predictable for a group just finding their sea legs after a year of confinement and cancellations. The “carriages,” however, preferred a sprightly rate of motion. Suspension yawed back and forth through the tree-lined chicanes. The rumble from their engines preceded them, joining the percussion section of South Africa’s Springtime electrical orchestra maintaining an audible harmony with the encircling thunder. In a way, the theatrics from the weather and the noises and the veil of dust kicked up by passing tires, the purpose of this round – to determine starting positions Stage One – was overshadowed. An afterthought for those trying to get their bearings.

“Today they call it Stage Zero. So it’s a hundred kilometers for… the guys to find their feet, effectively. Today is just finding starting positions, so the guys should really be taking it easy and just getting themselves [together]. This discipline is completely different [than] the South African Championship. That’s probably what the guys should be focusing on; that’s what we as a team will be focusing on. Then really just to take it day by day. Six days is a long event…There’s a lot of things that can happen. So, the reality is to try to minimize mistakes and take each day on its own.” – Terence Marsh #308, Red-Lined Motorsport 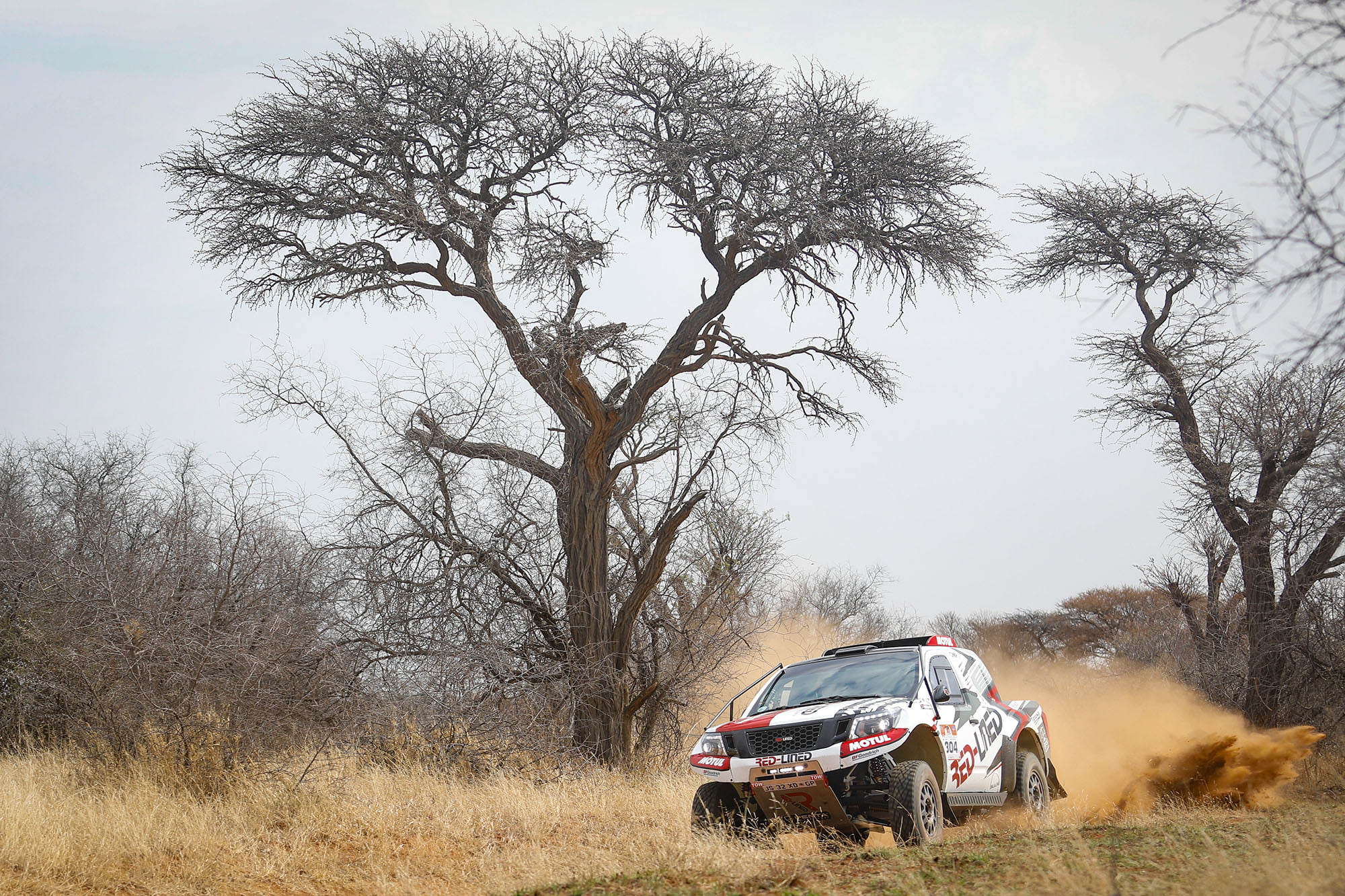 In Cars, the Red-Lined Motorsports team managed to keep a fair distance away from their adversaries with Eben Basson and co-driver Gerhard Schutte [#304, Red-Lined Motorsports] nabbing pole position as mates (including the team owner) Terence Marsh and Riaan Greyling [#308, Red-Lined Motorsports] trailed – but not too far – behind. A roughly six-minute difference kept these Dakar-ready T1’s moderately spaced, but the ten-plus-minute gap to the next few cars secured their placement on the board. The buggy representing the 213 Racing Crew drifted into the third position captained by Dewald Van Breda and Johann du Toit [#213]. Following in the General Standings was in fact the buggy’s more efficient cousin, the Utility Task Vehicle. The first of surely many exciting incidents to come. Dakar veteran Hennie de Kierk with rookie navigator Adriaan Roets [#301, Treasury One] decided it was best to focus their energy on learning the roadbook, reeling in de Kierk’s heavy foot and developing their communication as a fresh duo.

“It wasn’t much, just a hundred kilometers today. It’s just for the starting positions. But I think it’s a nice shakedown, especially from a navigational point of view. We’re used to…GPS navigation. It’s all about your books and your bearings…So, we’ll just get used to it. Slowly get into the rhythm. Find our rhythm, find our speed…It doesn’t help me overdriving. And he doesn’t know where we are. And we overshoot and make mistakes. Really going to take it easy, find our rhythm and see how it goes!” – Hennie De Klerk #301, Treasury One 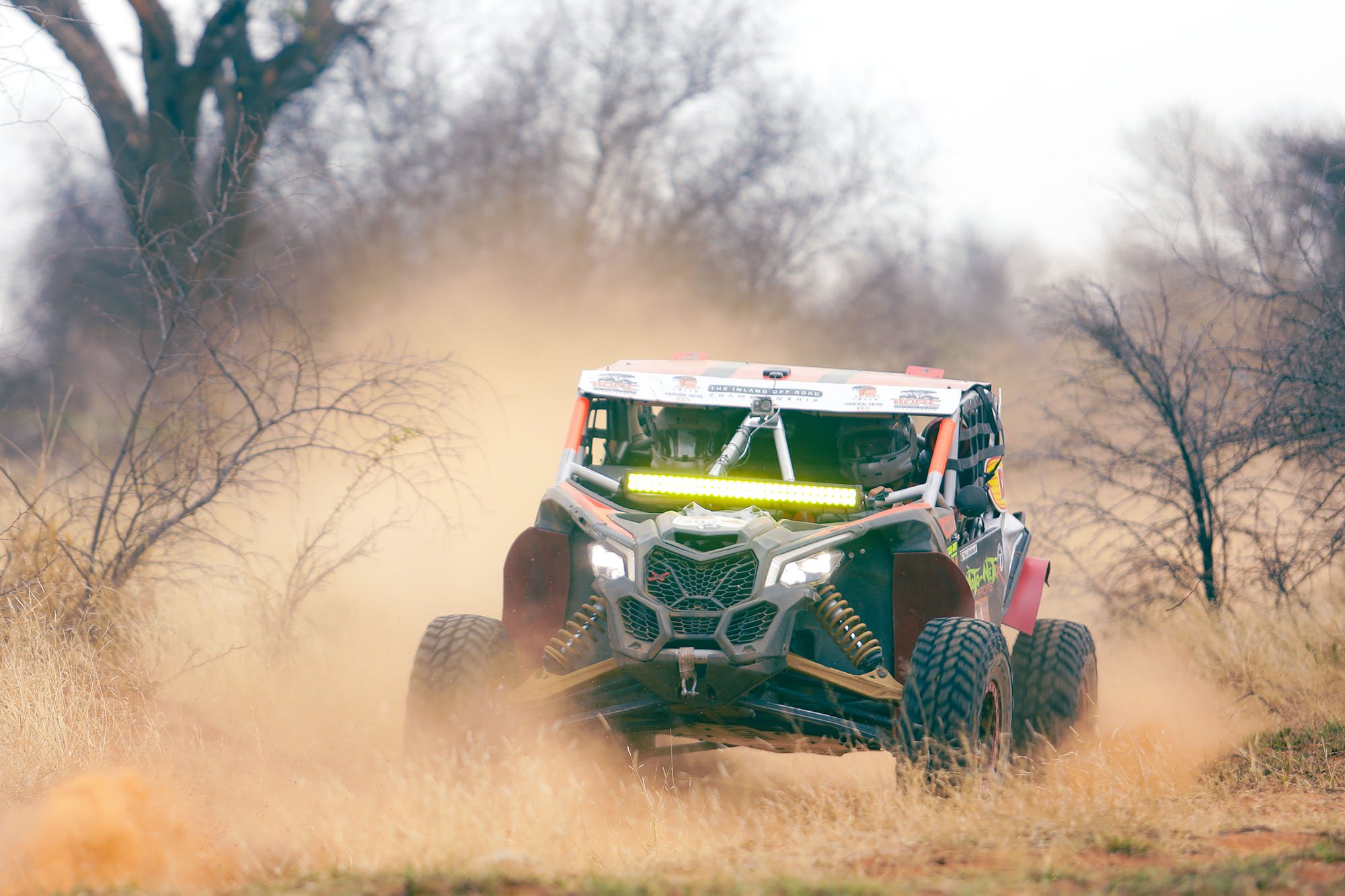 Although the top two Side-by-Sides cleared the Prologue in good time, Theo Erasmus and Johan Bekker [#202, MARIENDAL RACING] stopped at just over two hours. The remaining three SSVs seemed a bit too thoughtful with the directions, clocking in at 2:46:30 [#201], 3:12:08 [#205] and 3:32:08 [#203]. But this means nothing in the world of Rally Raid. The succeeding stages will be evidence of that. Long days, like 600-700-kilometer routes are guaranteed to mix up racers. As well as wear them thin. Waypoints won’t be any easier to find as the event progresses, and the hieroglyphic symbols referred to as “Tulips” may only become more complex. In a competition virtually unknown outside of Africa (and parts of Europe), Witnessing it is like seeing a unicorn… Or maybe a zebra without stripes. It feels familiar, kind of looks similar to something you know well, but you can’t quite put a finger on what thing might be, and why it’s so special. That’s the Kalahari Rally in a marula nutshell.

Ø Road to Dakar: Kalahari Rally is the only Dakar qualifier in Africa. The event has been a breeding ground for excellence despite its youth, opening its doors in 2018. In the inaugural year, current Yamaha Factory Rider Ross Branch won the Dakar Challenge changing his fate as a racer. Competing in the 2019 Dakar Rally, he subsequently earned himself a reputation as a smart, gritty rider which led to the pro contract he’s held since 2020. A factory title well-deserved. With a fairly even playing field from the outside perspective, it’ll be exciting to see which competitors are sifted to the top ranks.

Ø Mafikeng Historical Review: Mafikeng is the capital city of the North West province of South Africa. It is built on the open veld at an elevation of 1,500 m (4,921 ft), by the banks of the Upper Molopo River. The Madibi goldfields are some 15 km (9.3 mi) south of the town. The town was founded by Molema Tawana (c. 1822 – January 1882). Born in Khunwana during the difaqane period, Molema was the son of Kgosi Tawana of the Tshidi Barolong. Molema’s brother and close confidant, Montshiwa, later became chief. During the period that the Tshidi Barolong resided at Thaba Nchu, where they found refuge during the difaqane, Molema was converted to Christianity by the Wesleyan missionaries based there. Molema’s son and heir, Silas Molema, was educated at Healdtown College. (Silas helped his nephew Sebopioa Molema get to the United States about 1904 to study law at Wilberforce University in Wilberforce, Ohio.)

The name Mahikeng means “the place of rocks” in the classic Setswana language of the people of the North West province of South Africa and the surrounding country of Botswana. However, the city is commonly pronounced as Mafikeng, in the vernacular of the Batswana people of Mmabatho. Historically it was also known as Mafeking and is still referred to as such historiographically in the context of the Siege of Mafeking and Relief of Mafeking during the Boer War. At the outbreak of the Second Boer War in 1899, the town was besieged. The Siege of Mafeking lasted 217 days from October 1899 to May 1900 and turned Robert Baden-Powell into a national hero. In September 1904, Lord Roberts unveiled an obelisk at Mafeking bearing the names of those who fell in defense of the town. British losses during the siege were 212 people killed, soldiers and civilians, and more than 600 wounded. Boer losses were significantly higher.

Although it was outside the protectorate’s borders, Mafeking served as capital of the Bechuanaland Protectorate from 1894 until 1965, when Gaborone was made the capital of what was to become Botswana. Mafeking also briefly served as capital of the Bantustan of Bophuthatswana in the 1970s, before the adjoining town of Mmabatho was established as capital when Bophuthatswana became nominally independent in 1977. Following a local referendum, Mafeking joined Bophuthatswana in 1980 and was renamed Mafikeng. The town was treated as a suburb of Mmabatho. Following the end of apartheid in 1994, Bophuthatswana was formally reincorporated into South Africa. With that, the merged Mafikeng and Mmabatho became capital of the new North-West Province under the name Mafikeng. In February 2010, Lulu Xingwana, the Minister of Arts and Culture changed the town’s name to Mahikeng. [Wikipedia: https://en.wikipedia.org/wiki/Mahikeng]

Ø The “Iron Man” class is Rally Raid’s equivalent to “Malle Moto.” Riders are allowed two boxes, a tent and two-wheels. They must service their own vehicles as customary for this category. With a few entrants ready to take on the brutalist form of this sport, it’s sure to be a good show!

Ø The Kalahari Rally generously offers a “Stage Cut & Run” option for their competitors. It works like so: 1st “cut” – Driver still classifies for results (with penalties); 2nd “cut” – Driver can finish rally but not classify for results

Ø The event hosting the ADV Moto class which gives participants a taste of rally raid without the pressures of competition. They will ride an abbreviated route, exploring the Kalahari Desert at a more leisurely but still challenging pace. This year, there are nearly 30 entrants in the Adventure Class, with several riders already promising to join the next edition with a proper race number.

Ø In true South African fashion, the organization has arranged a safari for those interested at the end of the race. It’ll be held in Pilanesburg, the second largest game preserve in the country.

Ø Live tracking will be available to the public in both English and Afrikaans: Click here.