After two days of fun in the sun in Ensenada, competitors were anxious to hit the dirt on day three of the Yokohama NORRA Mexican 1000 Presented By Method Race Wheels. The bikes got an early start; leaving the ceremonial start in front of the Riviera Convention Center at 6:00am. They would leave town on the way to Santo Tomas where they would re-group, and then go off the line at full speed. They would head south through the mountains until popping out on the Pacific coast. After Erendira, they turned east towards Valle De Trinidad before it joined the 4 wheeled vehicle course, and headed into San Felipe. The 4 wheeled classes went to Ojos Negros, through the pine forest, and then to Valley T as it’s called. The bikes got a huge head start, and ran a separate course so the two groups would not be on the course at the same time.

Some of us don’t like getting up that early, and the riders did hit some foggy sections of the course before it burned off, but the fastest bikes were able to reach San Felipe by midday. Modern Open Class, and first overall rider Matt Sutherland finished in time to park his KTM 450 Rally, have some Transpeninsular Cerveza Clara and tacos, and then hit the beach. He was followed by a pair of 50+ Vintage Dudes class competitors; Daniel Bartolucci, and Scott Purcell. Nick Torchio was 4th fastest, and rounding out the top 5 was Ben Shuckburgh who hails from Powys, Wales. His co-rider Andrew Haddon is from Dubai. 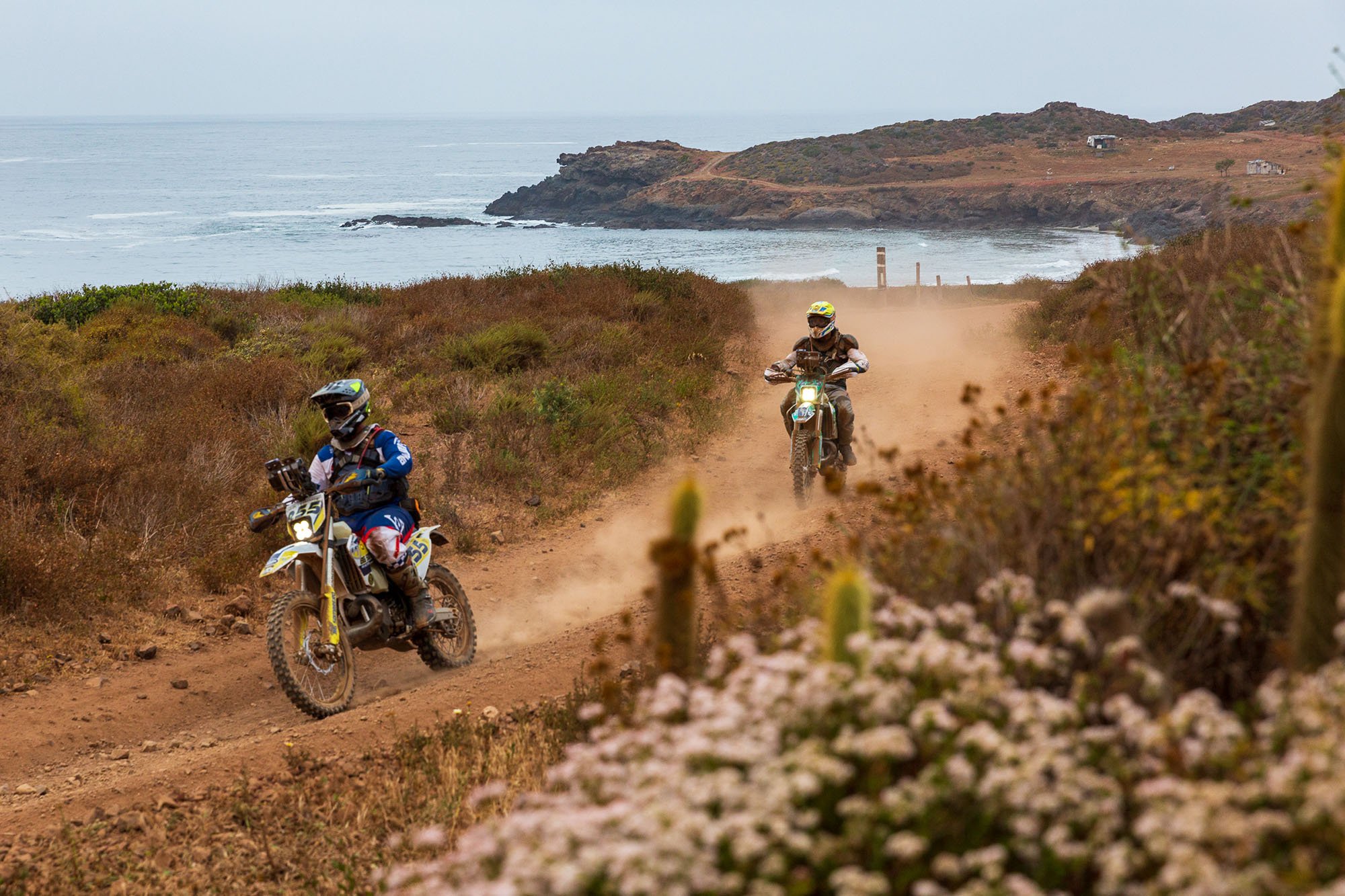 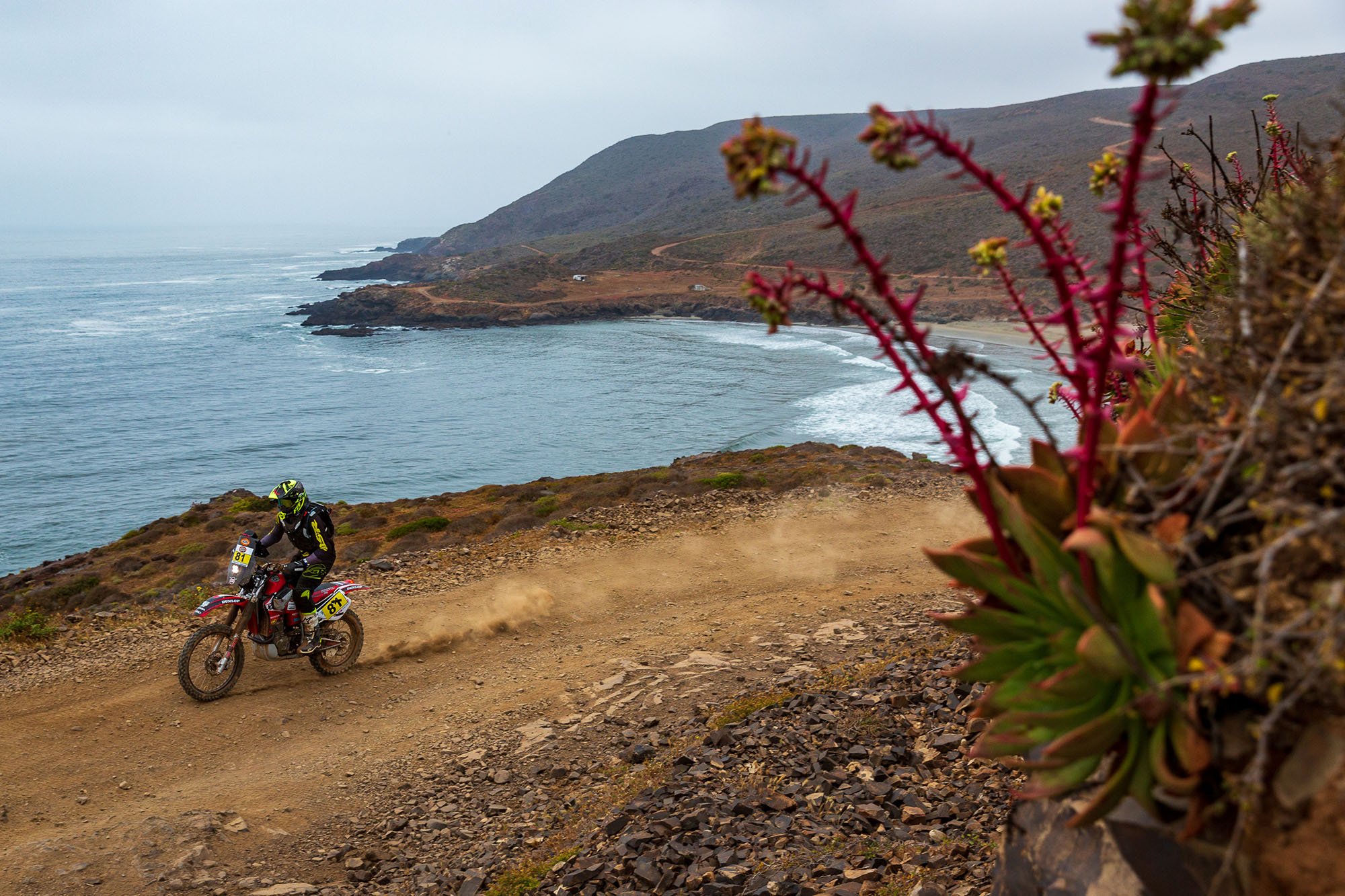 Lyle Tonelli’s team made it to San Felipe on the 3 wheeler, as did both the Vespa Teams. The Vespas did unfortunately time out and have to take the pavement in from Valle T so they wouldn’t get caught by the unlimited vehicles, but they are still going. In fact, every one of the riders made it to San Felipe which is a good sign that Jimmy Lewis’ roadbook navigation training worked. Michele and Kevin Bush were riding sweep for the bikes, and said it was like herding cats with a few, but it all worked out. Day 2 in the dirt will be much easier.

In the 4 wheeled classes Rhys Millen picked up where he left off last year. He started on the pole, and ran the fastest time of the day. Rhys said there was a lot of wildlife, and local traffic on the roads which made it difficult to drive fully committed, but his Jakal ran great, and he stuck to the plan of running clean, and not taking any risks. 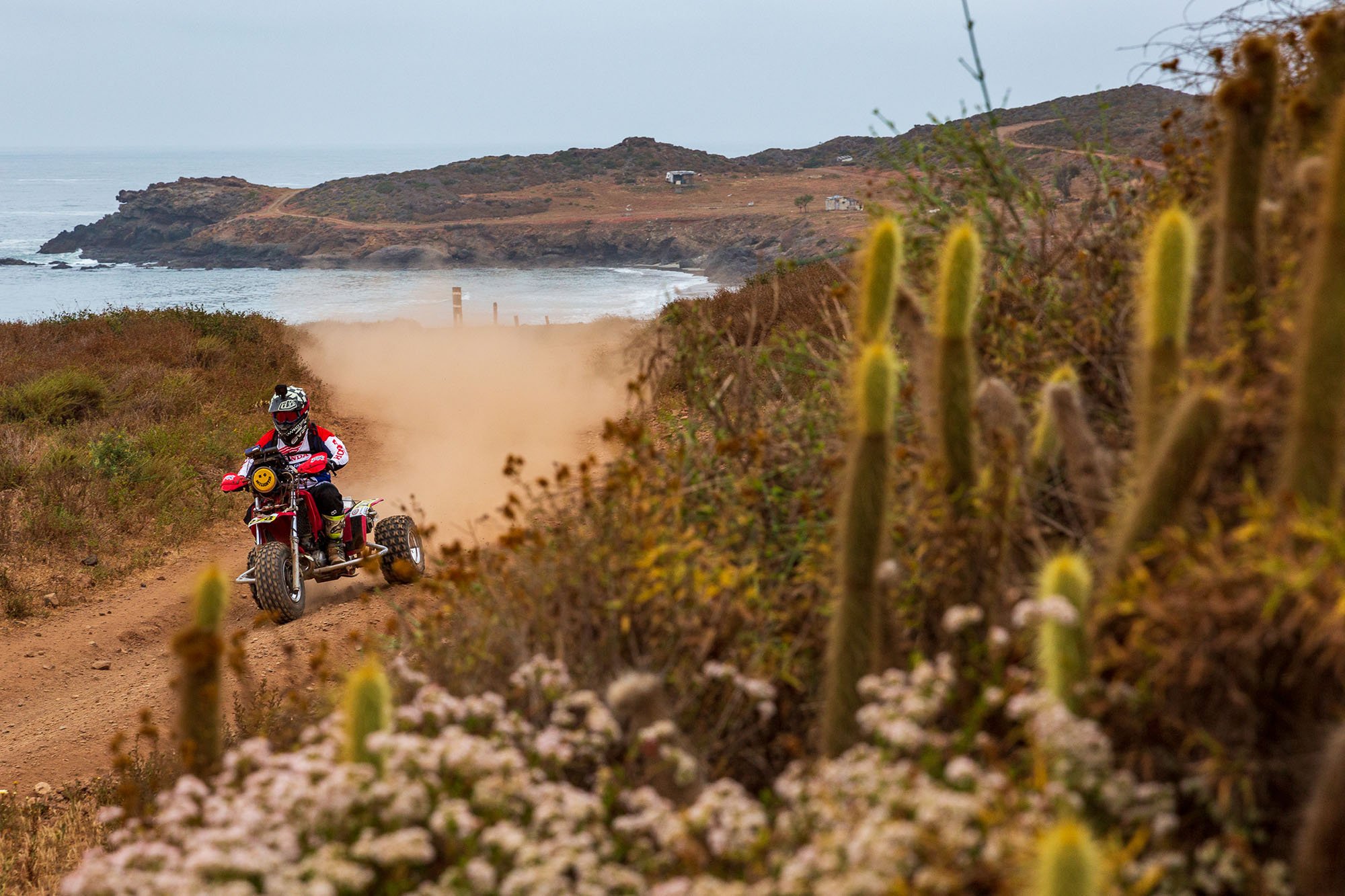 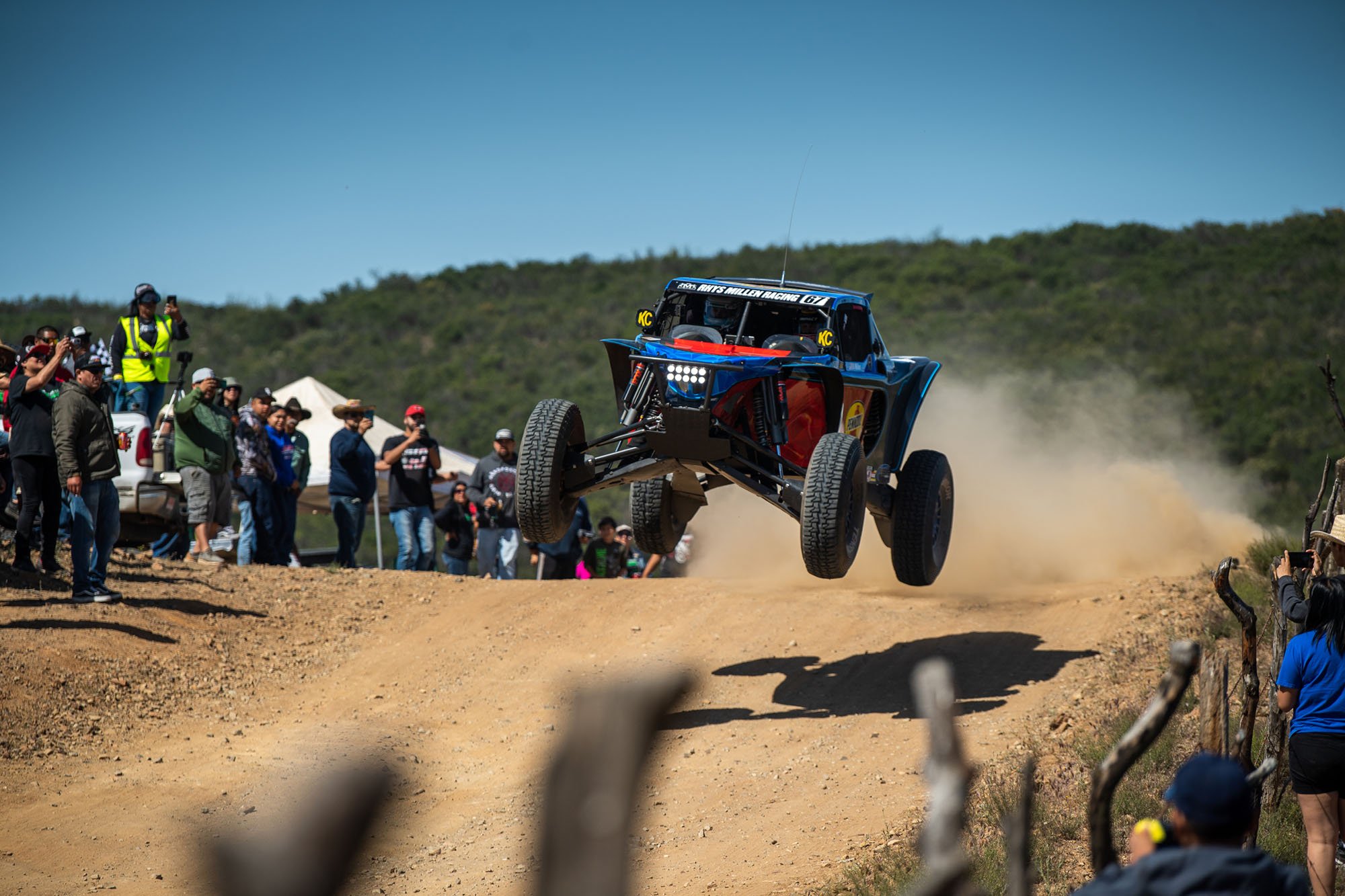 It must have been an emotional day for Zak Langley. He was driving his Dad’s TT Spec truck. His Father John, a huge off road racing enthusiast, and friend of NORRA’s passed away while racing an event last year. Zak started 38th, but passed a ton of other racers while running the second fastest time behind Millen. Steve Menzies was third fastest despite stopping to help Brad Bauder, who competes in the same class, to get back on the course. NORRA is about competition, but it’s also about getting everyone to the celebration at the finish.

Fourth fastest was RJ Anderson in his Polaris Turbo R. It’s amazing that he was able to hang with the unlimited trucks. “My first day of NORRA was epic,” said RJ. “I’ve done quite a bit of racing in Baja, and today was probably the most fun. We are still figuring out how this rally type racing works, but it felt good to be the first UTV to San Felipe!” A top five isn’t so bad either. In the fifth spot overall was Dave Sykes in his Vintage Open Truck with 4×4, Ford Bronco. 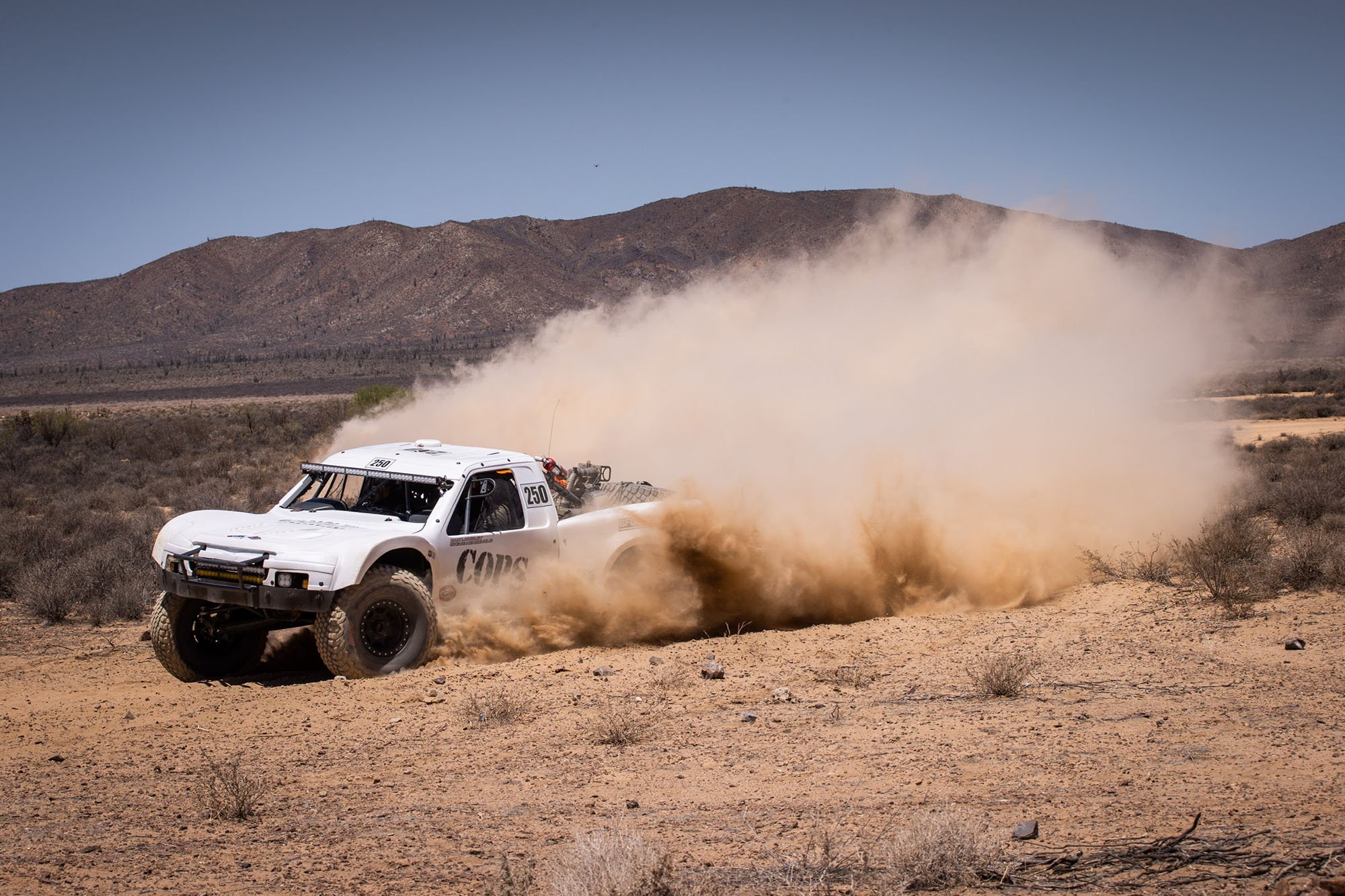 There were reports of a boulder in the road and a stalled vehicle that caused some bottlenecks, and dust from being bunched up, but those who ran well were happy with the results. Hap Kellogg was fourth fastest in the Vintage class 5 category, but said it felt really good in the car, and that they had a pretty clean race.

Also out on the course were the Slow Baja, and Rapido Baja groups. They both run sections of the course, but also hit up the sights, and hot spots along the way at a more relaxed pace. At least that’s what they are supposed to do. We had one participant that ended up on their lid. It was in fact Big Oly. When you all resume breathing, it is probably a testament to Bill Stroppe, and Parnelli Jones that it was not damaged very bad at all. They flipped it back on the wheels and kept going. Apparently it was in a tricky spot that has caught many drivers in the past. Also driving with the safari class was Yeti and Yolo the adventurers who have quite a bit of YouTube fame. The couple is known for tackling anything they set their minds to. They built a Ford Ranger in just a couple weeks and came down to Baja for the Mexican 1000. 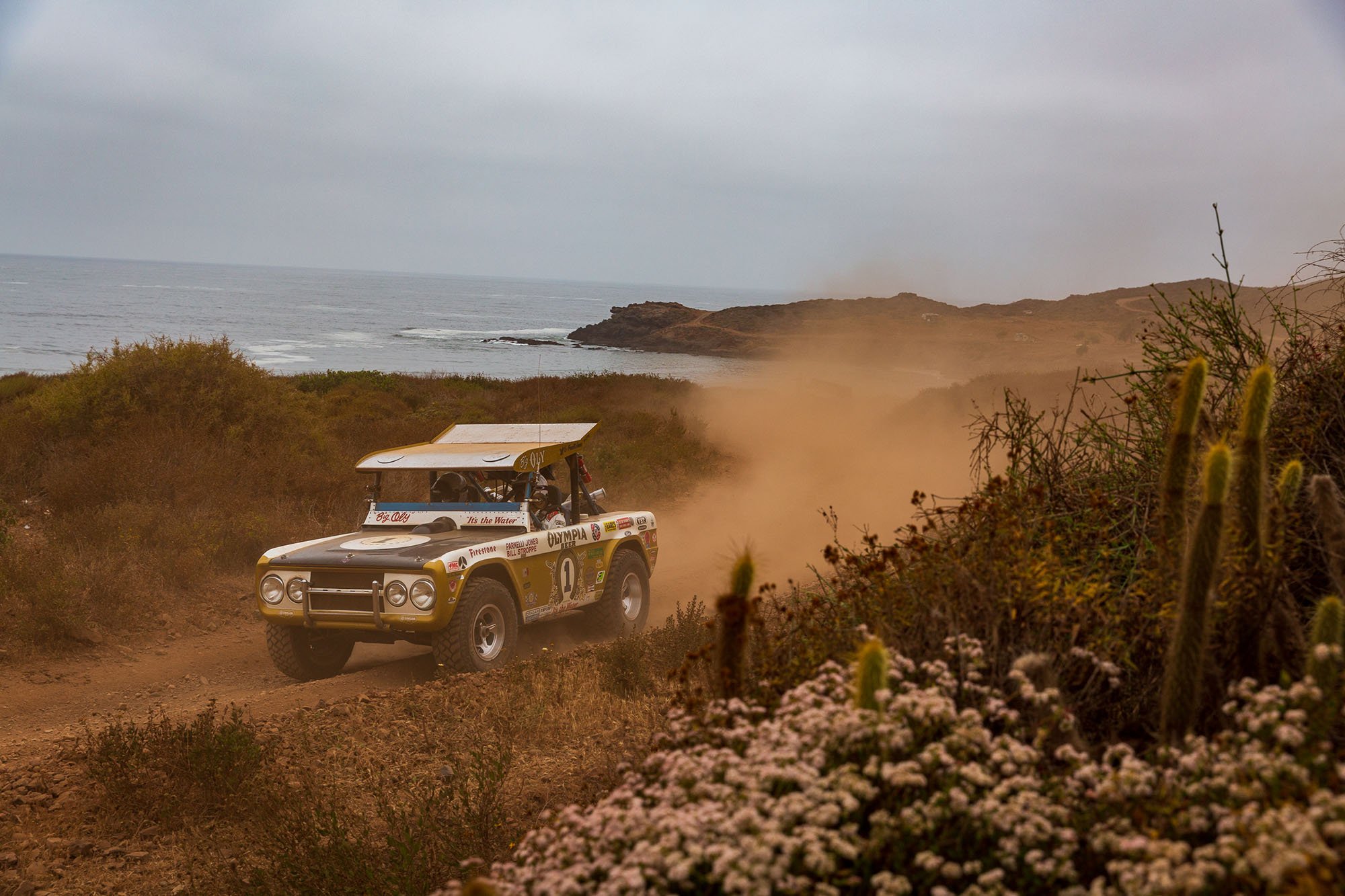 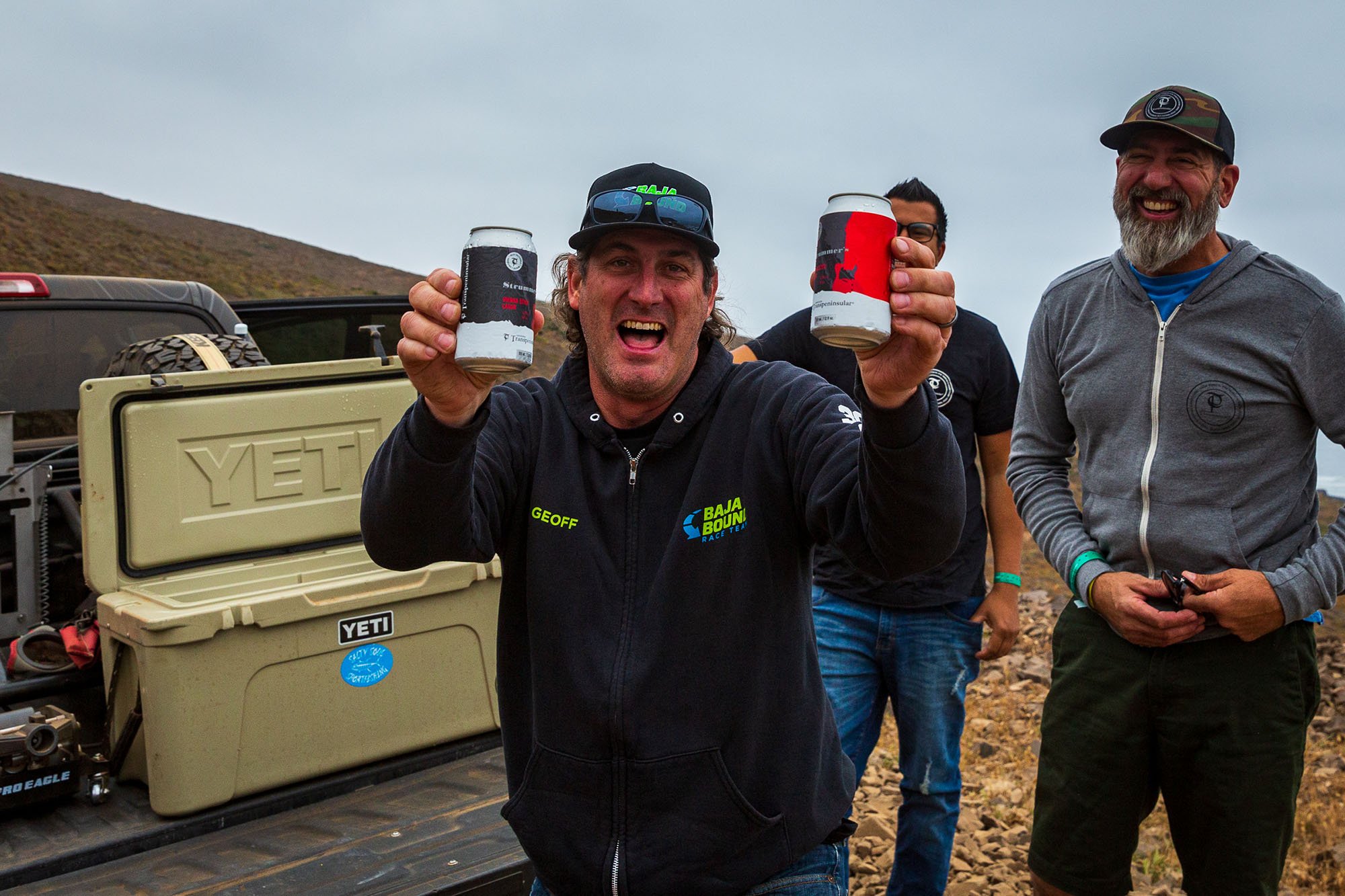 “What an EPIC day!” says Yolo. “I’m still in shock to be down here in Baja with this ‘91 Ford Ranger. Starting Day 1 with the new Safari Rapido Class at 7am in the middle of the main drag in Ensenada was something incredible to be a part of. Even more exciting was witnessing all the various vehicles tackle the terrain, and overcome repairs and mishaps. Everyone came together to work as a solid team on the coms when needed. It was honestly a cool experience with all new friends, not strangers. We saw many wonderful views of the Pacific Coastline, and inland high desert landscapes. We made our way to the Sea Of Cortez side, finally getting to see the Yucca plants, Ocotillo and some blooming desert flowers. The bumps were rough and the miles of dirt long, but those smiles couldn’t be wiped off our faces. With the windows down, and just cruising the high deserts of Baja, I couldn’t think of a better place to be on earth today. As we rolled into the finish line in San Felipe we were greeted with smiling faces and excited energy! What a day! (And this is only day 1).”

I think they have the NORRA bug! It’s called “The Happiest Race On Earth!” for a reason. Day 4 will take on a whole other feel as the terrain changes. We’ll have updates after racing has concluded, and don’t forget to check out the live feed in the mornings from 8:00 to noon, and the recap show from 6:00 to 8:00; all times are Pacific Standard. Go to  https://www.youtube.com/c/Mexican1000Rally to tune in. 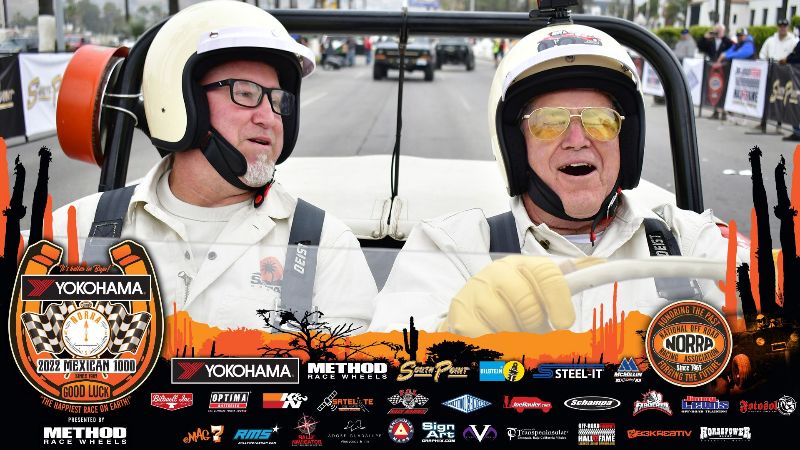