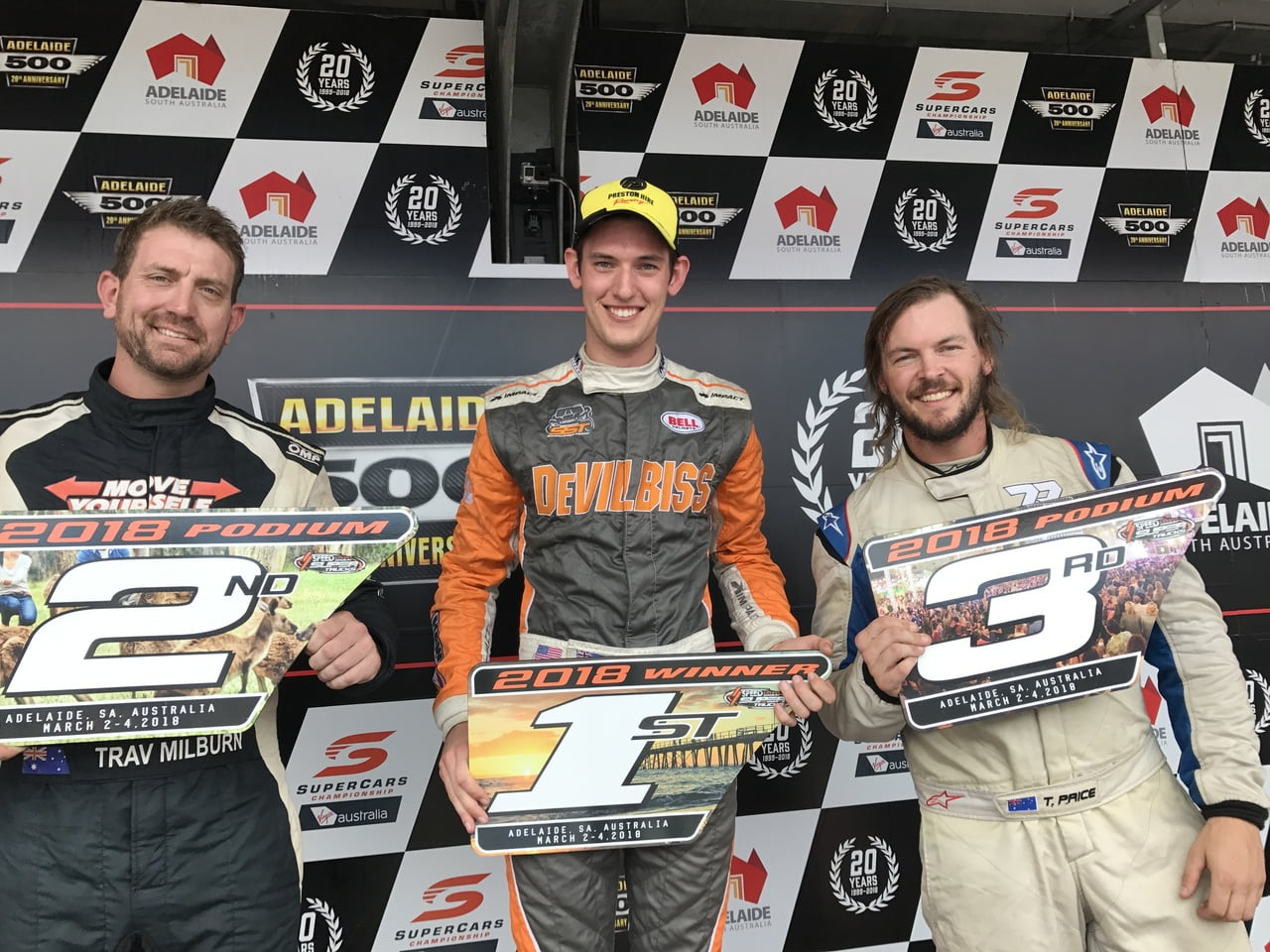 Second starting Toby Price of Singleton, New South Whales driving the McDonald’s SST truck would jump out to an early lead ahead of Pole Sitter Bill Hynes of Nazareth, Pennsylvania. As Hynes would fade back into the pack, third starting Jeff Hoffman of Phoenix, Arizona would slide into the second position, and start to chase down Price for the top spot.

Saturday Race 2 Winner Robby Gordon of Orange, California; driving the SPEED Energy/ Toyo Tires truck once again would not waste any time moving to the front of the field from his sixth starting spot settling in the third position behind Hoffman and immediately setting his sights on the leader.

As Price would start to extent his lead on Lap-2, Gordon was already putting a nose under Hoffman for the second position. Gordon and Hoffman would race nose to tail with one another drafting trying to cut into the lead of the price truck. However, Gordon would make a move on Hoffman launching off the McDonalds further to steal the second position away.

Right before the half way competition caution would fly Gordon would track down Price, and move past him for the lead.

The driver who would benefit the most from the competition caution was Gold Coast, Queensland driver Matt Brabham in the DeVilbiss/Hawk Performance entry. After the cumulative points inversion Brabham would start last on the field after acquiring the most points over the course of the first three days through qualifying and the first two races.

Bunching the field back up would allow Brabham an opportunity to make a run at the leaders. Picking off Hoffman and Milburn for fourth and third respectively in the following laps.

Quietly running in the top five the entire event Adelaide, South Australia driver Travis Milburn driving the TRG Transport SST would remain strong lurking in the shadows of the leaders in fourth place waiting for something big to happen in front of him he could capitalize on.

As the white flag flew you could put a blanket over the lead five trucks, as it was anyone’s race.

Brabham moving past Price for second setting his sights on Gordon for the lead, with Price, Milburn, and Hoffman waiting for their opportunity to strike on the two if something were to happen.

Gordon and Brabham would trade the lead position back and forth through multiple turns racing hard to the finish.

Coming to the checkered flag out of the final turn Gordon would encounter mechanical issues, as the truck would just shut off on him. Rolling out of the racing grove allowing Brabham to drive by the stalled truck of Gordon on the inside of the track. Gordon’s truck would not re fire right away dropping him out of contention for the win.

Brabham would go on to capture his first victory of the 2018 season, ahead of second finishing Travis Milburn whom would earn his best career Stadium SUPER Trucks finish. Matt Brabham would take the third position rounding out the podium for the second straight day.

Making tremendous gains over the previous two races VP Racing Lubricants and Fuel driver Blade Hildebrand of Yucca Valley, California would drive a clean and smart race making sure to hit all his braking zones, and avoid contact with the other competitors to score his best career Stadium SUPER Trucks finish with a fifth place.

Stealing the show in one of the wildest finishes in Stadium SUPER Trucks history Gavin Harlien of Mesa Arizona would cross the finish line in the Road Pod Transport Transformed truck backwards after doing a series of donuts all the way down the front straight away after breaking off his right rear KMC Wheel and Toyo Tire. With the roaring massive crowd in the background Harlien would be credited with the sixth position in the final finishing order.

Friday Race 1 second place finisher Arie Luyendyk Jr. would run mid-pack for majority of the race not able to gain any positions in his Boost Mobile backed entry. Luyendyk would be credited with the seventh spot in the final finishing order.

2017 Stadium SUPER Trucks Champion Paul Morris would continue to struggle with his race truck being stuck mid pack for the third straight race battling hard in the thick of the chaos beating and banging on one another. The OzLand Security driver would cross the finish line and be credited with the eighth position at the conclusion of the 9-Lap race.

Greg Gartner of Penola, South Australia would once again loose positions late in the race after contact with Arie Luyendyk Jr. whom would spin him. Gartner would bring the No. 410 R & J Batteries/ Fuchs across the finish in the ninth position.

After leading majority of the race Gordon would be credited with the tenth position after his misfortunes on the lap corner of the last lap.

Friday’s race winner Cole Potts of Scottsdale, Arizona would get into the back of another truck folding his hood into his vision causing him to spin out on his own and loose the lead pack of trucks. Potts driving the HallmarkTrust.comtruck would go on to be credited with the eleventh position

Pole sitter Bill Hynes driving the LIVE/ United Fiber and Data/ Think Loud Development truck would miss the braking zone on the first lap in an early corner and would fad to the back of the pack. Never able to recover Hynes was scored in the twelfth position.

The overall standings over the three races would see Matt Brabham first, with Arie Luyendyk Jr. claming second, and Travis Milburn rounding out the top three.

Other than the trucks launching 20 feet in the air covering distances more than 150 feet, what sets the SST program apart from other series is the fact that all the SST trucks are identically prepared and delivered to drivers in race-ready condition. Race winners are decided by driver skill rather than individual team engineering and budgets. Drivers and their personal mechanics are assigned specific SST mechanics who together tune and make minor adjustments to the 600-horsepower trucks.
P
RDC