Most of us think we know Mexico, probably because we’ve ventured through Baja at least once for an off-road race but if that’s the case, that’s like saying you know the United States because you’ve been to Las Vegas or Parker.  Mexico is one of the culturally richest countries in the world.  The diversity of the people and their roots give Mexico something unique wherever you go.  Baja might be Mexico but it’s nothing like Guanajuato, the city where the FIA chose to do their 3rd stop in the WRC world tour.

Disclaimer: If you just want to see sick ass rally photos jump down until you see the first action frame.

Guanajuato, the state and the city hosting the 2017 WRC Mexico event, is a place out if its time where the architecture, food, people and culture is astonishing.  After the biggest off-road race of the year, The Mint 400, we decided to skip the unpacking and fly straight to Guanajuato city the next day.

We first stopped in Guadalajara City, another mayor city in Mexico just a few hours away from Guanajuato City, to see what it was all about. Guadalajara is famous for the Mariachi music, food and among other things their soccer team Las Chivas, one of the most popular teams in the country. 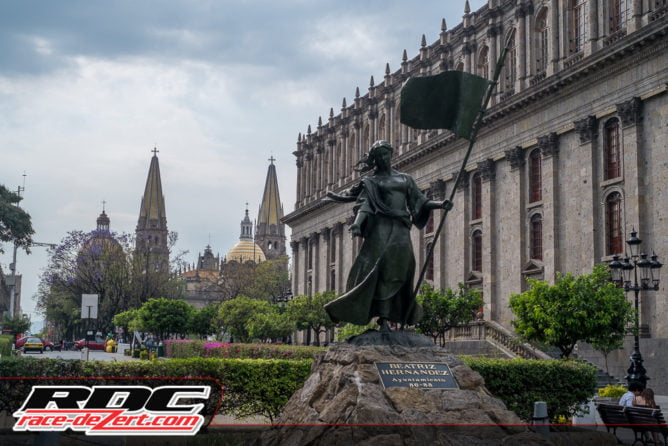 Tequila, the only place where the tequila is made, is just an hour away from Guadalajara.  It’s probably a good thing we couldn’t attend because legend says if you go to Tequila you will end up fully wrecked.

On our way to Guanajuato, we did a quick stop at El Cubilete Hill.  This mountain is famous for the statue similar to Cristo Redentor in Brasil and for being considered the exact middle point of Mexico. Another quick stop was San Miguel de Allende, a city named a World Heritage city by UNESCO. Every year this city brings thousands of tourists who admire the 17th century architecture that has been preserved but the jewel of the crown is the church in the middle of the town. La Parroquia de San Miguel Arcángel was made in the same century but then in 1880 Zeferino Gutierrez made the gothic facade.  Gutierrez was an indigenous bricklayer and self-taught architect. It is said Gutierrez’s inspiration came from postcards and lithographs of Gothic churches in Europe which in 1864 was visited by the Emperor of Mexico who said “It’s worth of kings”.

After a few days in full tourist mode, we made it to Guanajuato.  This city is the most unique and beautiful place we have ever witnessed a race.  Founded as a mining town and inevitably being a strategic spot in the Mexican Independence War, this place is full of history and culture.

We could have spent another two weeks in Guanajuato and there are not enough words to describe how this city made us feel but we went for rally racing! 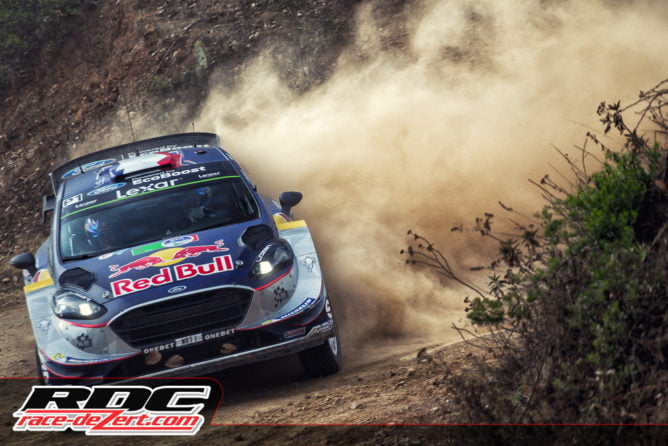 The rally had a bumpy start.  For the first time ever, the WRC officials and Mexico City politicians made an agreement to do the opening stage in Mexico City (around 5-6 hours away by car).  We decided to skip the first stage and shoot the next day of racing.  However, because the rigs bringing the racecars were stuck all the night before at the highway because of an accident unrelated to the rally, rally officials decided to cancel the first 2 dirt stages of the Rally. 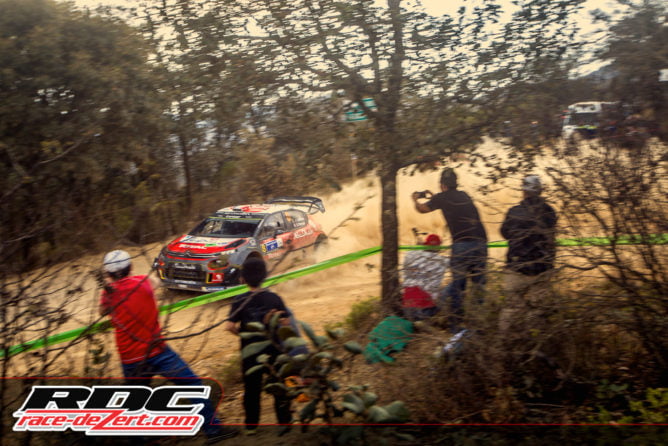 It’s crazy coming from Baja racing where everything is a bit more open.  Here, the FIA officials do not joke in safety.  Five official FIA vehicles drive on track and officials all over tell fans where to stand and how to be safe.  If you don’t obey them, they cancel the stage without hesitating.  Three vehicles numbered “000”, “00” and “0” then came by about 10 minutes from the start of the rally.  They do this to let fans and officials know the stage is about to begin. At first, it felt a little weird but then when we saw the “0” car coming, you know shit’s about to get real.  Kind of when you see the first helicopter in the horizon and the dust below it in Baja. At 4:14pm the first car of Jari-Matti Latvala, probably the only Toyota Yaris that will intimidate you, passed by.  It was during this moment we realized that any rally we’ve ever seen on TV is nothing like seeing in real life.  It is absolutely unreal the way this drivers take the turns. 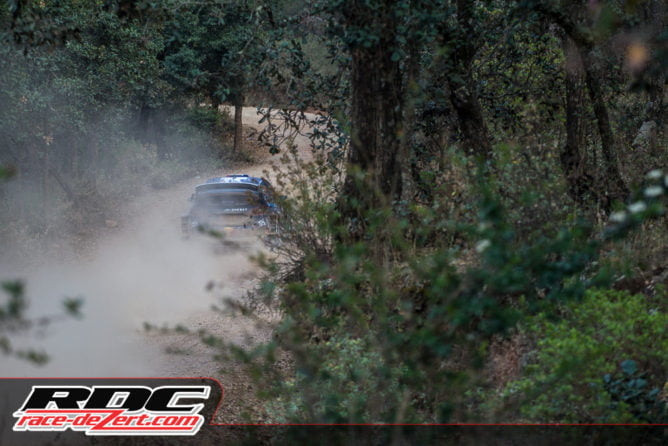 The first stage we shot was “El Chocolate” SS4, the longest stage of the rally with 34.11 miles.  this stage had lots of altitude changes and at the end (where we shot) it crossed the Guanajuato Forest 3,000 meters (9,842.52 feet) high. The drivers mentioned lots of issues with their engines because of the altitude. 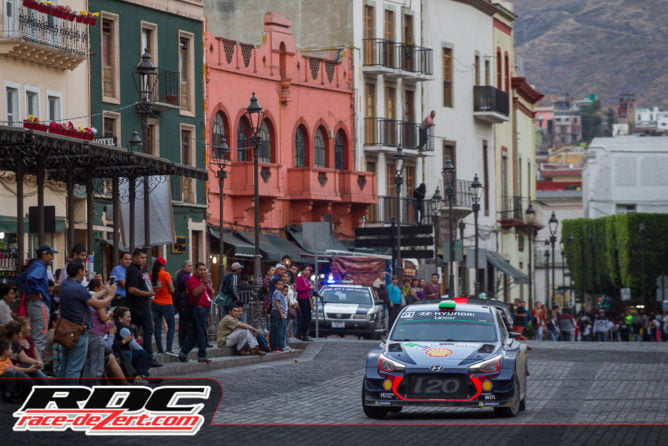 The final stage of the day is one of the most iconic stages of the rally – the street stage in downtown Guanajuato. This stage is only .7 miles long but this is where the rally shines the most, with underground streets and tens of thousands of fans watching the action from the sidewalks, balconies, roofs, etc… 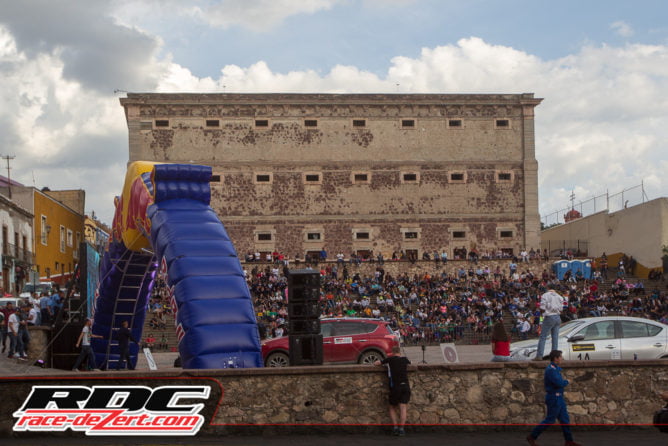 The street stage started next to La Alhondiga de Granaditas (seen above), a granary used as fortification in the Mexican Independence War. One by one, the rally cars made it through the final stage of the day. 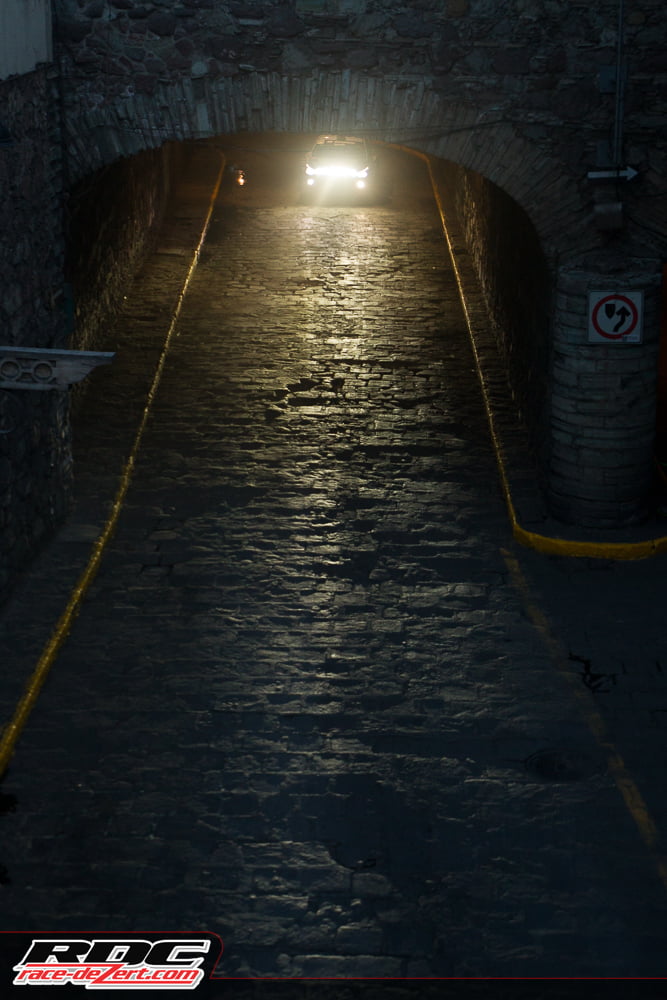 On day 2 of shooting, we were only able to hit two spots – SS10 Lajas de Oro and SS12 Media Luna.  By this time, the English driver Kris Meeke was in the lead by +20 seconds over Sebastien Ogier. 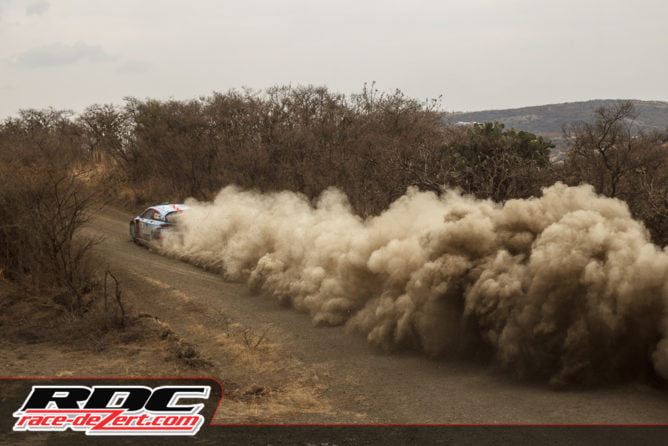 In WRC racing and in this Rally México, only 24 drivers were entered and divided in 3 categories:

WRC3 – 2-wheel drive vehicles with 1.6L turbo charged or 2.0L engines and six-speed sequential transmissions.
WRC2 – 4-wheel drive.  More powerful than the WRC3 but limited to a cost of $290,000.
WRC – 4-wheel drive – 1.8L turbo restricted to 380HP.  At 0-60mi in less than 3.5 sec and top speeds of 130mph, these machines are the Trophy Trucks of the car manufacturers who spend millions and millions of dollars developing them.

So every day we saw around 40 vehicles a stage, between two shooting locations.   It seems easy and even boring compared to desert racing where we are able to see twice those numbers just in the Trophy Truck class, followed by another 200 entries, but trust us – it’s completely worth it.

Look at it this way, a Trophy Truck is pure brute force with more engine, more horsepower, more suspension, bigger tires.  Throw anything at it and it will welcome it.  In WRC is pure intelligence, you have a restricted 380HP power vehicle so how do you make it faster? Aerodynamics, weight, technology and driving precision. 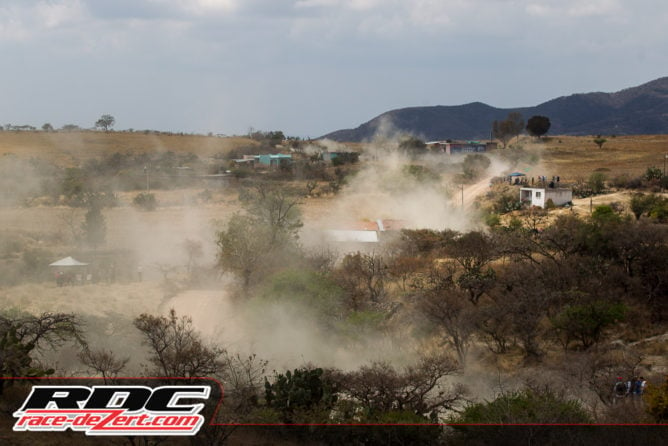 The following day, Kris Meeke held first position with a comfortable +33 seconds lead over Sebastien Ogier, who at the same time had a gap of +39.5 seconds of the third place, Thierry Neuville. The only American at the event competing was Dave Wallingford with Team O’Neil Racing in WRC3 and finished 2nd in class. 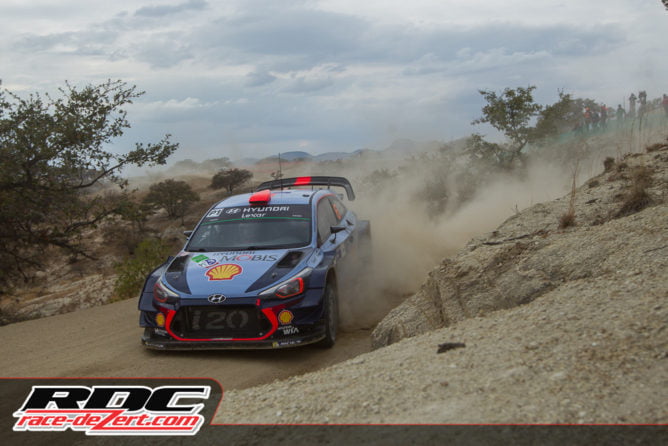 On the last day things got insane! Just watch Kris Meeke below almost blow the entire rally in just one corner.  That is WRC. Fortunately for him he only lost around +17 seconds of the +35 he had leading taking the first win for Citroen.  Who thought coming to watch a Hyundai race a Ford Fiesta would be so much fun?