The 30-second spot, shot in February at the San Bernardino International Airport, broke nationally on ABC during the 12 Hours of Sebring endurance race. It features off-road champions Cameron and Heidi Steele – both Yokohama-sponsored drivers – whipping around a circle of high-performance vehicles all equipped with Yokohama tires. Cameron (a Baja 1000 champion) in his 800-horsepower off-road truck and Heidi (a Baja 500 and 1000 champion) in a bright yellow Lamborghini Gallardo Superleggera chasing after him.

“The expectation was to make the best television spot in Yokohama history, and one that a year from now, would look as good as any in the category,” said Fred Koplin, YTC director of marketing communications.  “I also wanted a spot that looked different from every other tire ad on television. Our creative team developed an ad idea that visually showcases YTC’s technology and ultra high-performance tires… while having fun.  It’s absolutely perfect.”

DDG is scheduled to appear on several television network including ESPN, ESPN2, TNT, CNBC, TRU, Golf and Comcast Sportsnet through October 2011. Promotional versions of the commercial are also currently airing in the Boston and Houston markets, where YTC has existing sports marketing agreements with the NBA’s Celtics and Rockets.

DDG was created by Yokohama’s ad agency – Culver City, California-based Kovel/Fuller – and produced by Bandito Brothers under the direction of Mike “Mouse” McCoy. Bandito Brothers is the tandem that has helped create “unconventional” commercials for companies ranging from BMW to the U.S. Navy as well as the Baja 1000 movie classic “Dust to Glory.”

To see the commercial, go to http://www.youtube.com/user/YokohamaMotorsports.

“Yokohama prides itself on using the latest technology for the ultimate performance tires for all types of vehicles,” said Koplin, “including the Geolandar A/T-S® on Cameron’s truck, the ADVAN Neova® AD08’s on Heidi’s Lamborghini, and tires for all of the cars that formed the duck, duck, goose circle throughout the commercial.”

Yokohama Tire Corporation is the North American manufacturing and marketing arm of Tokyo, Japan-based The Yokohama Rubber Co., Ltd., a global manufacturing and sales company of premium tires since 1917. Servicing a network of more than 4,500 points of sale in the U.S., Yokohama Tire Corporation is a leader in technology and innovation. The company’s complete product line includes the dB Super E-spec™ – the world’s first tire to use orange oil to reduce petroleum – as well as tires for high-performance, light truck, passenger car, commercial truck and bus, and off-the-road mining and construction applications. For more information on Yokohama’s extensive product line, visitwww.yokohamatire.com.

Yokohama is a strong supporter of the tire care and safety guidelines established by the Rubber Manufacturers Association and the National Highway Transportation and Safety Administration. Details can be found at the “Tire Safety” section at www.yokohamatire.com. 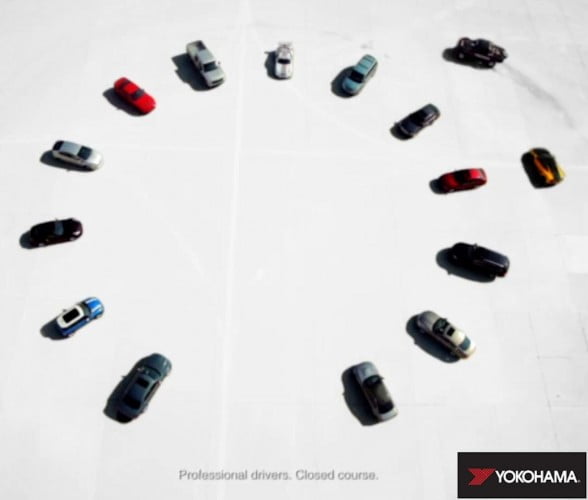