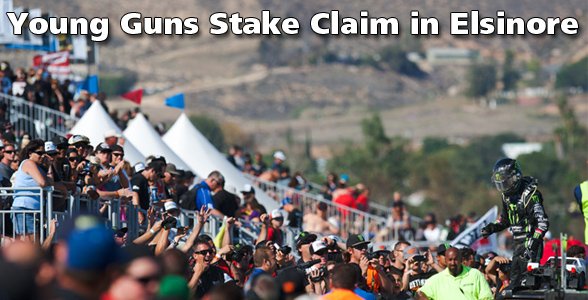 After an exciting round of racing in round three, round four of the Lucas Oil Off Road Race Series took no prisoners. Last years champ Brian Deegan went up in smoke in both the Pro 2 Unlimited and Pro Lite Unlimited.

The Pro 2 Unlimited race brought us some of the most exciting racing that we have seen all year. Fresh off his second place podium in round three, Marty Hart was back in round four to prove that he can run at the front of the pack. Leading most of the race, Marty Hart was making a statement with his commanding ten-truck length lead over Pro 2 veteran Rob MacCachren going into the mandatory caution. As we all know, you should never underestimate the ability of Rob Mac. MacCachren was able to battle his way past Marty Hart with just two laps remaining, while 2011 champ Brian Deegan was unsuccessful in chasing the duo down due to an engine failure on the final lap. When the smoke cleared, it was Rodrigo Ampudia who was able to work his way around the injured Brian Deegan to round out the top three. Although out of the top 5, Carl Renezeder saw his fair share of troubles in round four. Renezeder was unable to take the green flag in the Pro 4 division but was able to enter the track late in the first half of the race, resulting in a DNS (Did Not Start). Renezeder could not catch a break while battling in the Pro 2 main event taking his frustrations out on Robby Woods, sending Woods up the embankment giving the fans one heck of a show. Woods was able to pull off the nearly impossible recovery to save himself from a DNF (Did Not Finish).

The Pro Lite Unlimited race was nothing short of spectacular as all eyes were on the young gun; RJ Anderson. Anderson had the crowd on its feet for the entire race as him and Brian Deegan battled relentlessly for the first place position. Both Deegan and Anderson ran each other clean while the rest of the field continued to cause chaos among themselves. Although no full course caution flags were thrown, there was plenty of carnage in the back of the pack. With just two laps remaining Deegan went up in smoke once again (for the second time in round 4) leaving his truck dead in the water for all to pass. With RJ Anderson checking out on the rest of the field, it was up to Chris Brandt and Bradley Morris to battle out for the second place position, but the fire breathing four cylinder motor of Chris Brandt was no match for the young Bradley Morris. An impressive third place finish for Bradley Morris as he continued his podium streak at Lake Elsinore where he saw the podium in Single Buggy and Modified Kart.

“I have lines that nobody can run, and with my tire selection they don’t stand a chance”, Kyle Leduc told the Race-Dezert crew when he was asked about his plan of attack for round four. Kyle Leduc is a shot above the rest in the 2012 season, if he continues at the pace he is running, there will be no stopping the Monster Energy number 99! While the Pro 4 Unlimited race made for a great show, the possibilities of having an all Leduc podium is really what the crowd wanted to see happen. While Cary Hart was busy getting his car washed in the mandatory pit stop, Kyle and Todd Leduc took that time to turn up the heat and take the second half of the race by storm. When the green flag dropped for the second half of the race, the battle was on and it was all Kyle Leduc until the checkered flag dropped. Older brother Todd Leduc and Hart and Huntington driver Josh Merrell rounded out the podium for the Pro 4 Unlimited race.

Rounds five and six of the Lucas Oil Off Road Race Series are just around the corner and you can expect some fireworks between the seasoned vets and the young guns in Surprise Arizona.