does anyone have pics or info on these cars. there almost nonexsistant on google and they apear to be a awsome concept for a stadium class. i found this on the short course racer.

"When considering the vehicle classes for his original stadium event Thompson had to chose from existing categories, selecting the most popular and best-suited to the stadium competition. However, after a few years of operation Thompson added an additional category. One might say the UltraStock class introduced in 1985 by MTEG could be consided some of the first specialty built racers for short course. They were also restricted to 2-wheel drive but could be either front or rear wheel drive. Although most were rear engine buggies with fiberglass bodies fitted. A mass produced "kit car" reduced fabrication coasts by installing a "pod" inside the chassis. This pod included a molded-in stock appearing dashoard, floorboard, and innner side panels. The look of production cars built for racing short course with the sleekness of stock bodied sports cars was an idea that Mickey felt fans could identify with. Also the manufacturers involved at the time may have added to his decision making. This class body style also had to utilize a replica body of currently manufactured Sport Utility vehicles with at least 5000 units produced and be readily available to the public. At first the look-alike cars were the Pontiac Fiero, VW Golf and Corrado models and Porsche. The class was first introduced at the Los Angeles County Fairgrounds and the event was won by Vince Tjelmeland. At the urging of various manufacturers in 1990 the Jeep Cherokee, Nissan Pathfinder, Toyota 4-Runner, Ford Explorer were added to the class line up. Then in 1993 the car models were eliminated and the class designation became the Sport Utility. 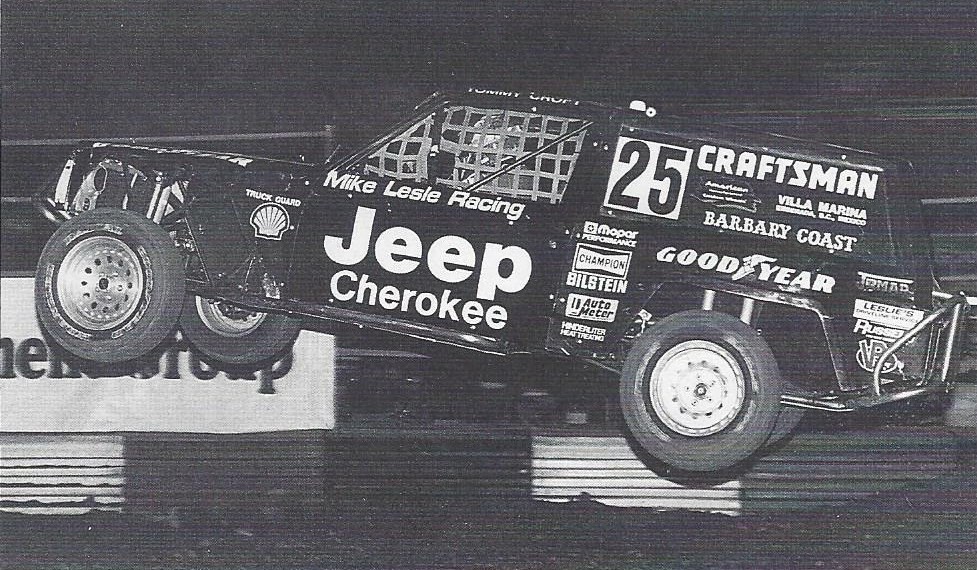 Here's a vid with the SUV bodies

And here's one with the Ultra Stock car bodies

Yes.. they showed up in 1985 in the Series.. then morphed into the Sport Utility bodies in later years.. Here are a few images from the collection.. La Tijereta said:
Yes.. they showed up in 1985 in the Series.. then morphed into the Sport Utility bodies in later years.. Here are a few images from the collection..
View attachment 183319

Man it was so simple back then...
It won't fail because of me!

I remember seeing a few for sale in the Dusty Times. I would guess most of them went to foreign countries..A few to the mid west and east coast. Put some paddle tires on'em and you got a neat sand car..lol.. Seems like a lot of vehicles went to foreign countries during the '80's and '90's though.
Don't cling to a mistake just because you spent a lot of time making it I remember this car flying down the jump at the coliseum stadium , making it further than the trucks and dominating the series . Monty you Rock !!

best class to watch during the Mickey Thompson run by far

I think Rich Minga had some for sale as they were used for Movie cars. It wasn't that long ago, might be worth chasing down. Look him up on Facebook.
All I want to hear out of you is “speed zone”, “we’re on fire,” and “I got the fat chick.” Zambo

its crazy that this class was never imitated by another series. the nissans especially rad.

I have to admit I was a fan. I liked the Fiero. Was it Craig Durfee that won the first Championship? The only bummer about these cars was the cost of replacing body parts after a race. The close confines of a stadium event means lots of contact. It's one thing if you're sponsored by a factory, but replacing bodies isn't cheap.

Jeff Elrod's championship winning Corrado raced the VORRA series after MTEG. They added a 2nd seat and raced both short course and desert with it. The car was well built and very fast. I'm not sure where it is now.
“People who have never been to Baja, they don’t get it.”--Don "The Snake" Prudhomme
M

I didn't run the first season but I believe it was Vince Tjelmeland who won that championship.

I couldn't find a definitive list of Ultrastock champions but found this article from 5/6/1989 where it quoted Elrod as the defending champion. "After five races in the 10-event stadium series, Tjelmeland is leading with three wins and 200 points to 195 for defending champion Jeff Elrod of Campbell, Calif."
“People who have never been to Baja, they don’t get it.”--Don "The Snake" Prudhomme