Today was a day of race business and ceremonies. Today included legends, dignitaries, and government officials. Tech inspection and contingency were outside, while inside it was much quieter in the spectacular Cathedral Room at the Press Conference and Drivers Meeting. Registration was open until 4pm, the final papers passing back into the driver file around 5pm. Tonight at midnight the motorcycles and ATVs take the green flag, and 10 hours later the trucks will. 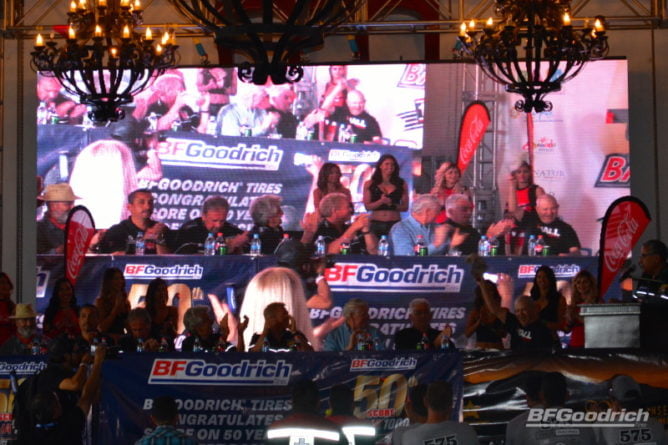 Roger Norman started the conference with the facts of the matter: 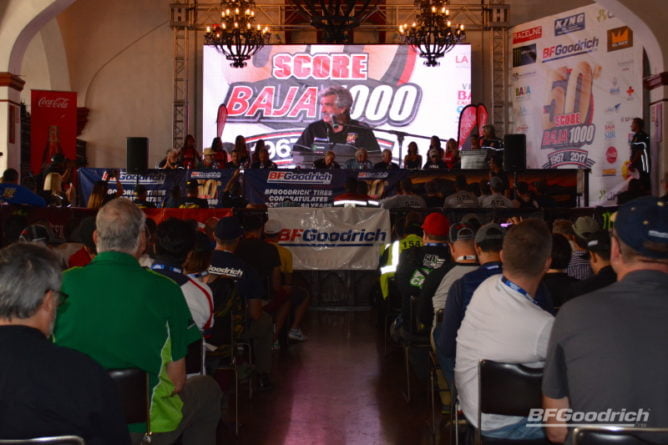 Sal Fish, Grand Marshall for the race, followed. “It is a privilege and honor to stand up here at the 50th anniversary of the most famous and recognized races in the world. I didn’t have a business plan 45 years ago when Micky Thompson brought me down to Baja. I never thought I would be standing up here at 50 years, I thought I would still be out arguing with racers! To the members of the press, without your help and publicity, we would never have been able to promote SCORE to this level. For the racers, without you, we would not have a series or fans. BFGoodrich Tires, without your support and pit support we would not be able to have sustained SCORE for this many years. Thank you to all for having me here.” 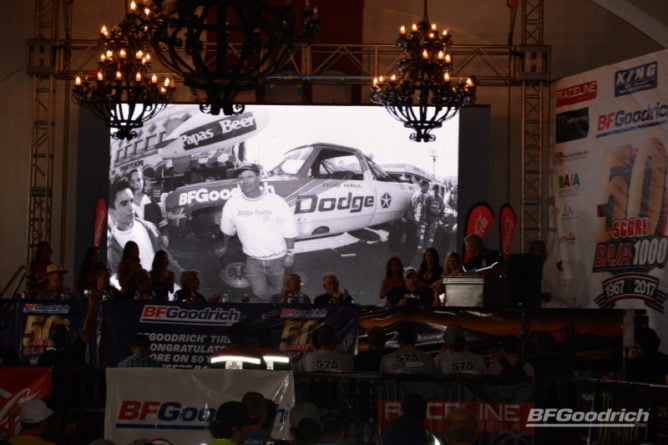 Thankfully, Rod Hall was on stage and next to speak. “I think this is wonderful. Thank you to the people of Baja for putting up with our racing. Every November for 50 years Rod has being going to Baja. They talk about being in a rut, and I was in a rut. It kept getting deeper and deeper, but thanks to BFGoodrich Tires they made bigger tires, so I could keep making my rut deeper. BFGoodrich and my wife have put up with a lot. My wife and I have been together for 58 years. We need the patience of a lady. Down here in Baja you could almost get in trouble. Thank you Donna! 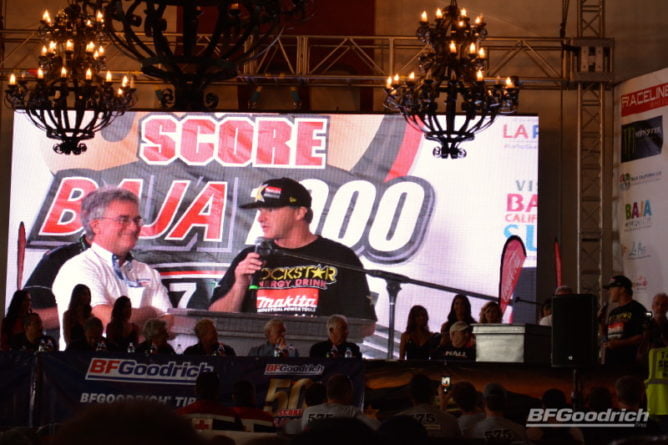 Jim Ryan recognized BFGoodrich Tires’ 40 years of supporting SCORE and growing the sport with their mapping program, pit program, and now the overall contingency of $50,000. BFGoodrich Tires Chris Baker went to the stage to appreciate the honor. “Thank you to the SCORE Racers that make this race THE race. Thank you journalists for making the race accessible to everyone across all countries who now want to participate. The Baja peninsula is a special place for BFG – it is our testing area and proving grounds. We are proud to have 89 race wins with 28 of them being at the Baja 1000.” 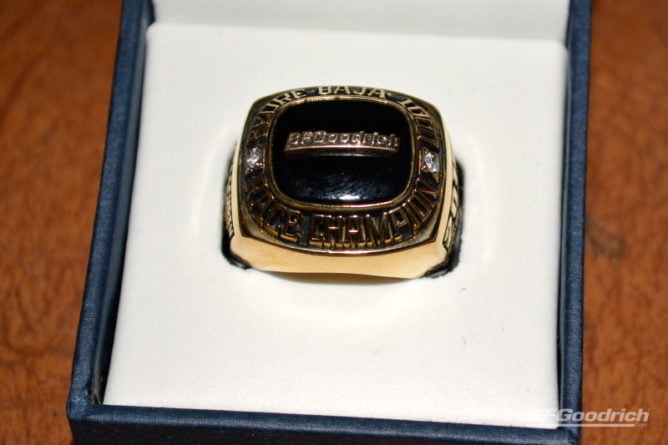 Chris Baker then presented Rob MacCachren and Jason Voss with the 2016 winner’s ring. “Let’s get this race started!” said MacCachren. 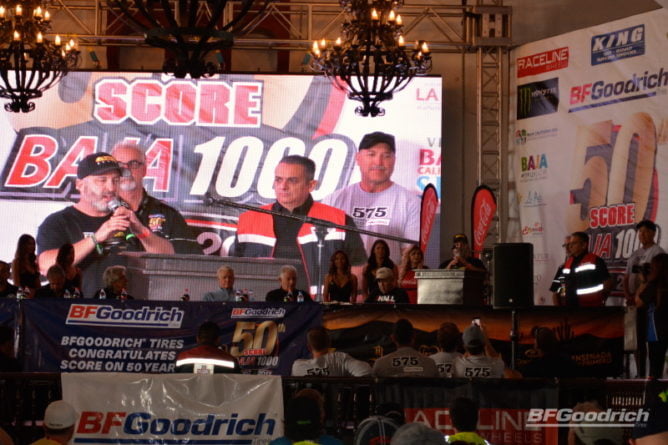 In reference to safety, Roger had a specific request to the Cruz Roja group – “Make this the safest race ever.” There are two commands fully staffed with satellite communications, airplanes and choppers ready to help. Donations are always welcome to support Cruz Roja. Greg Adler, CEO of 4 Wheel Parts, had a personal experience with his brother Kevin needing emergency help that almost took his life while in Baja for the Baja 500. Because of the experience, they decided to donate Jaws of Life. 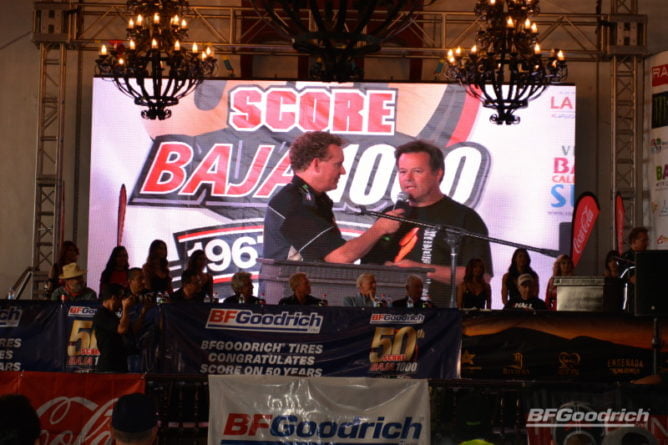 Robby Gordon, top qualifier for the Baja 1000, knows that his toughest competitor is Rob MacCachren. “Thanks to BFGoodrich Tires, my father was with them since his beginning and we appreciate them being on our team.” His son, Max, will be racing in the UTV class. 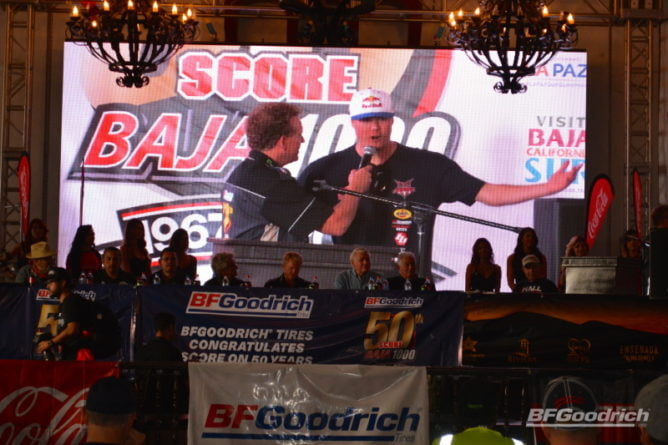 Bryce Menzies will be splitting driving duties with Jesse Jones. “I have been with BFGoodrich since I started racing. They have always had my back. The tires are really going to shine on this course – it is rough and tough!” 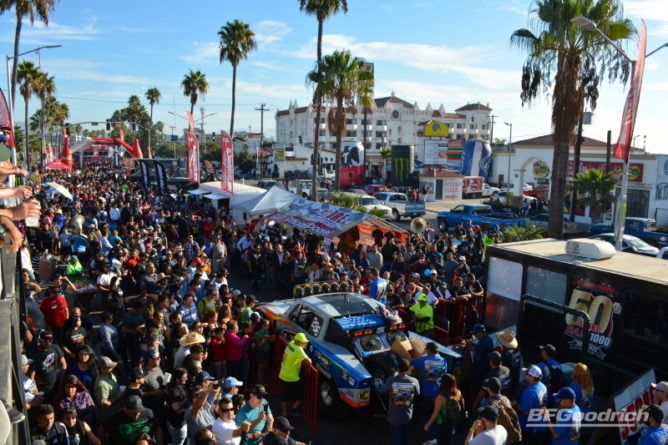 Contingency is a wild place for fans, but for racers it is the ability to make some extra dollars if they win by placing stickers on their car. When a team puts on a sticker of a specific size and they win the class, or they come into the finish according to the company’s rules, they have the ability to win cash or prizes! Tech is at the very end of the contingency parade. They are confirming that the suits aren’t out of date and up to spec; plus, they check the tech sticker on the vehicle. 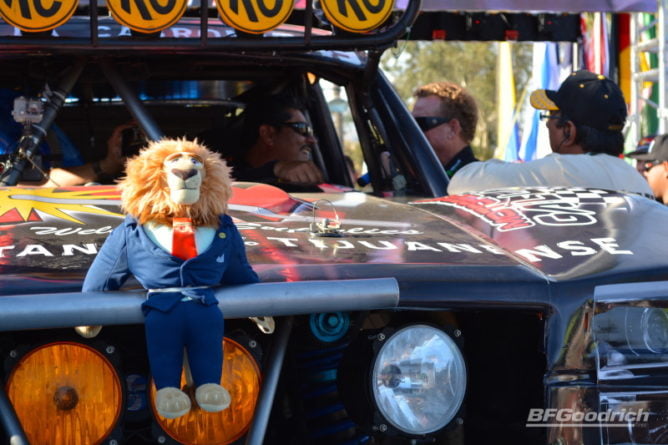 Contingency is an experience all it’s own. There are vendors selling things from souvenir shirts and hats to racecar necessities like spare parts and radio equipment. Locals peddle their goods in carts full of candy, chicharrónes, sunglasses, hats, bracelets, and more. Trophy trucks, Class 1s, Class 10s, and more lined the streets waiting to go across stage to tell their story to the LIVE coverage and then through tech. Crowds of people swarm around the vehicles gawking at them and asking to take pictures with the driver. 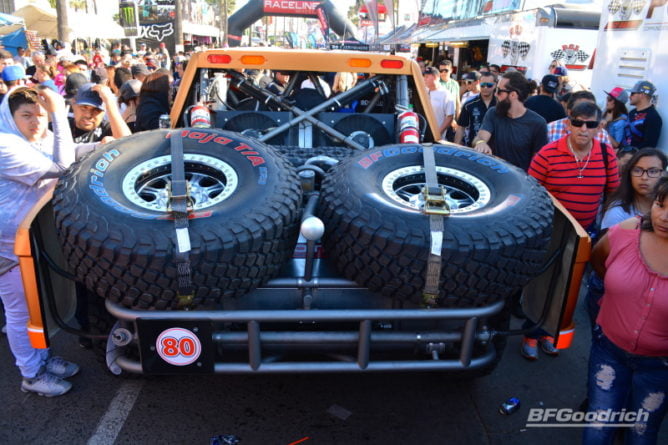 Walking through contingency is like playing a game of bumper boats, but with too many boats and not enough water. You feel like you’re swimming against a current as you try to make your way through the crowds and down the street, but the anticipation, excitement and delight hanging in the air is almost tangible; the Baja 1000 is an unofficial national holiday in Ensenada. 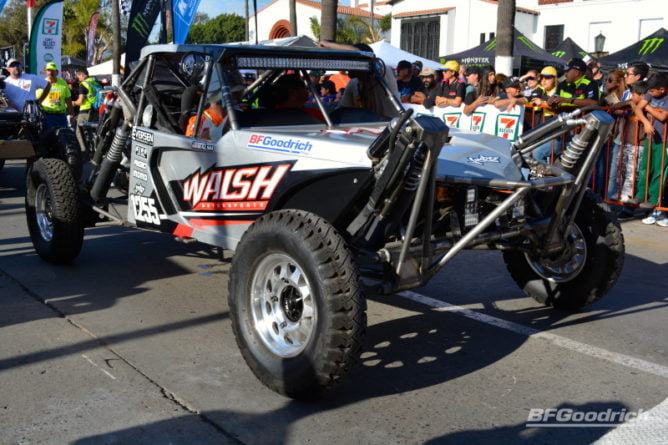 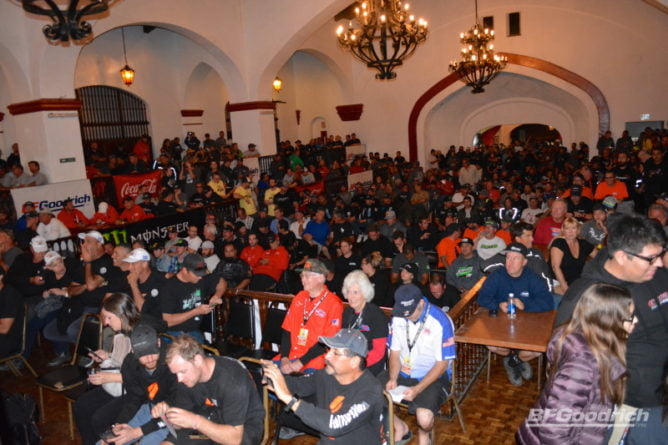 The drivers meeting was packed to the gills with racers. Fast racers, slower racers, racers wanting to win, racers wanting to finish, new racers, seasoned racers. I would think that all the racers had a giddy feeling, excited about tomorrow morning. Sal Fish, Grand Marshall for the 50th anniversary, got the place giggling as he finished with “Congratulations to all you guys…and all the ladies. Where were all you ladies when I was here?” 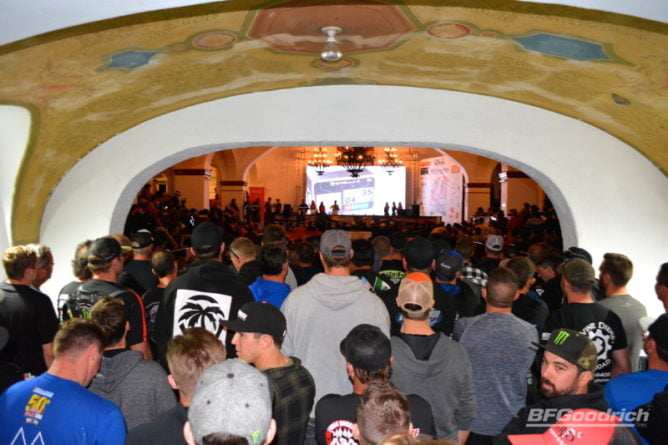