Preference:  Charlene Bower and Ladies Offroad Challenge winner Megan Stevenson will be reporting live from the 50th Anniversary of the Baja 1000 as they expose the complexity of the BFGoodrich Tires Pit Support Program, highlight all the ladies racing and of course talk racing!  This article is by Charlene Bower from BFG Pit 1:

It’s Race Day. It’s time to hear horsepower. It’s time to put everyone’s nerves to rest and head out to the desert to do what we all do best. The vehicles are as ready as they are going to be. The plans are as made as they can be. The time is now. It’s Race Day. 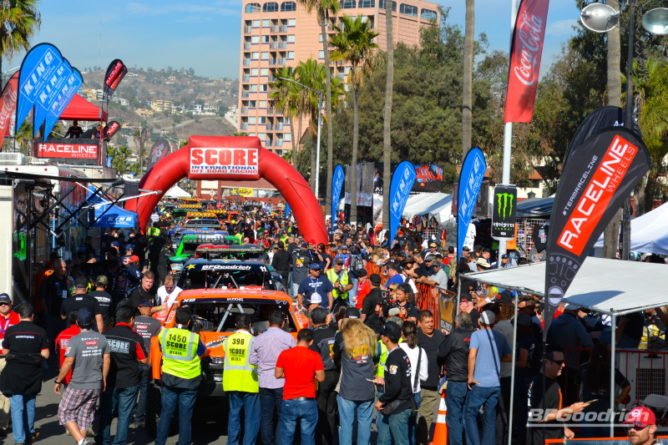 Racing is family, blood family and then our whole desert familia. When off the race course, even before one of the most challenging and competitive races of the year, the drivers are standing off to the side chatting. I doubt about race course notes, but guaranteed about racing of some sort. There are multiple family members getting ready to race in the same vehicles and some on different teams. Luke Johnson was out of the car and visiting with his dad, Ricky Johnson, as they were preparing for the final moments before the green flag. 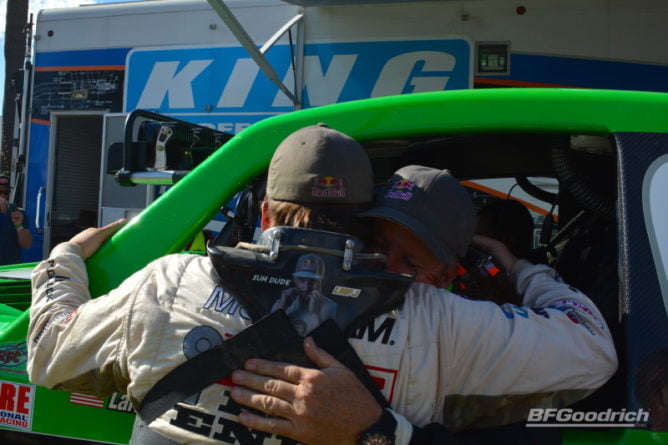 BFGoodrich Tires at the Start Line

So, there is a guy with a BFGoodrich Tires shirt on that has a clipboard walking the line. Have you ever wondered what he is doing? That is Karl Koenigstein. His goal by the end of the race is to know the brand and size of tire that each racer is running. This is how they keep track of shares, notice new trends in sizes, and understand what their competitors are doing. They have been collecting this information since 2012. 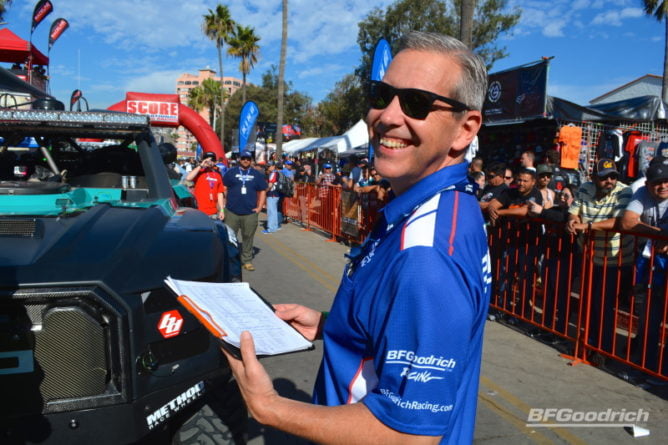 Brook Beckstrom was asked a question from one of his guests – How do you concentrate for so long? We may have eavesdropped on the answer, which was great – “You just do it, but really it is about having time in the seat. You start with two hours, and then you are able to work your way up. The longest I’ve been in the truck is over 10 hours. You push yourself farther and farther each time while making sure you don’t wear yourself out in the first two hours.” After we talked to Brook for a few minutes and told him about the BFGoodrich Tires Pit coverage we were doing, he was excited to give us a great story. “Eric Hustead, who owns the truck, was running Toyo’s. At V2R he had a flat and came into the BFGoodirch Tires pit and the pit helped them with no question, even fed him a sandwich. It was at that moment that Eric realized what I had been saying about needing to switch to BFGoodrich Tires, not just for the great tires but for the help as well. Having BFGoodrich is priceless to have in your back pocket.” 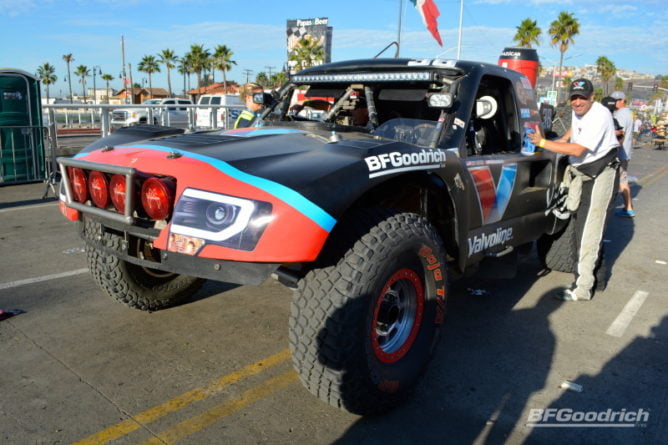 Jeff Geiser, who puts BFGoodrich Tires on all his Geiser Trophy Trucks, has 16-18 trophy trucks racing the Baja 1000. “We are trying to end the season with a championship that comes back to the Geiser shop. There are some that are close and others that are fighting for it.” 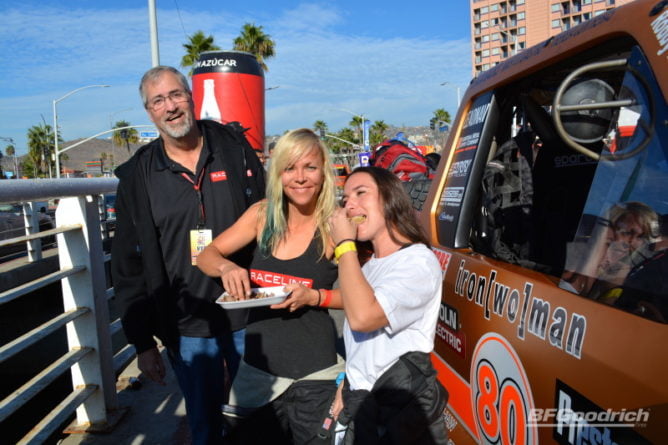 Jessi Combs and Erica Sacks pulled up to the start line, and Jessi was excited to get started, “You WILL see me at the finish line. It might not be early, but I will be there.”

Robby Gordon is a class act. He is a strong supporter of everything offroad and has worked hard to be on the pole position of the start line today. Me being me, and teacher of the Offroad Marketing School, I would like to point out that Robby was out of his car doing independent spots for each of his sponsors. When you want a partner, you have to do the work. 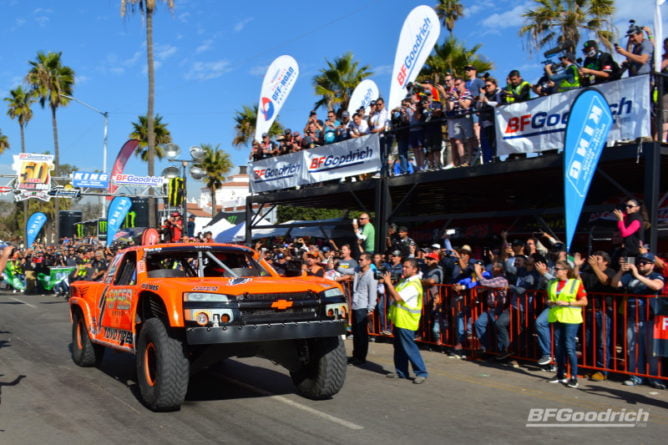 At 10:00am Robby Gordon took the first green flag of the race. He took off and squealed around the first turn. One minute later, Rob MacCachren, who is going for his 4th consecutive Baja 1000 win, mage a huge peel out line down the middle of the street warming up the BFG tires! 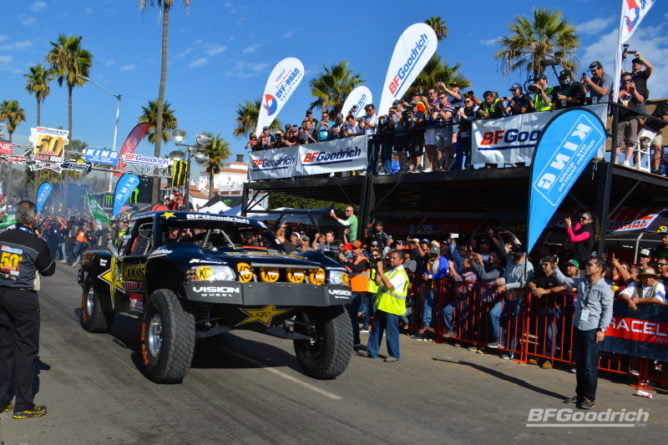 Our plan for the next couple days is to chase the pits. Yes, we will be dropping into almost all of the BFGoodrich Tires Pits. We are the Outhouse Judges! <Story Here> As we drop into each of the pits we will be capturing information and pictures about the teams that are in at the time. Keep track of us. If you have a team that is pitting with BFG, they may be featured! 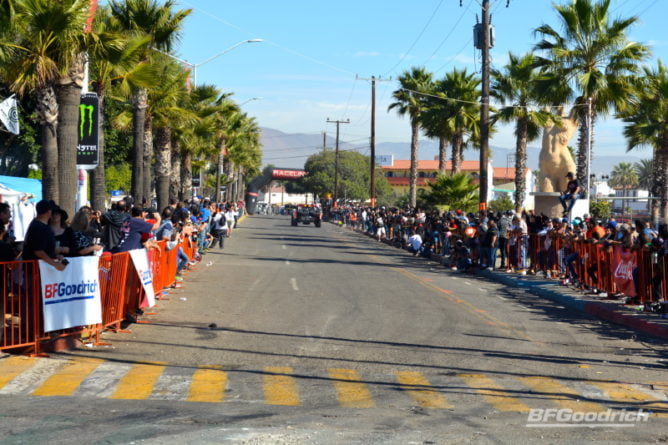 Our goal is to get to La Paz Saturday morning for a nap and a long awaited SHOWER! :) We will be in attendance at the awards ceremony and Rod Hall’s party. That sounds so far away from now…