Today there is more US representation in the Dakar Rally than ever before and of the 9 Americans appearing in world’s biggest rally, 8 have deep roots in motorcycles, including local favorite Robby Gordon and all 3 of his team’s navigators.

Seeded 13th by ASO (Dakar’s organizer), the “New Ricky is expected to do very well, adding to his impressive run last year that came to a sudden end in the penultimate stage 13. 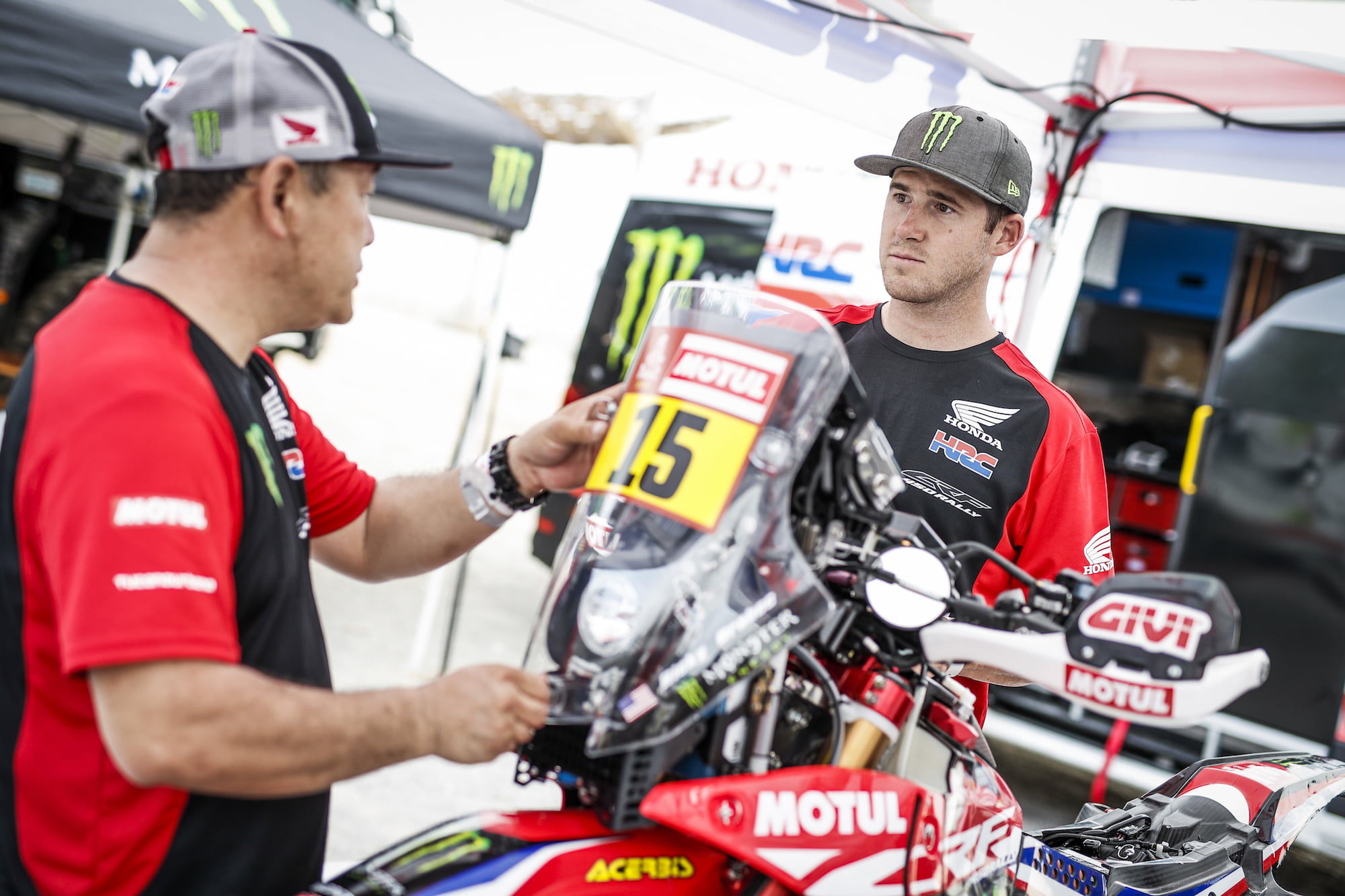 “Old Ricky was clueless to rally, a dumb kid who was just out there riding dirt bikes”, Brabec reflected last month, “He was more wild and didn’t care about much except go party and have fun.”

It’s a display of pure introspection coming from an aging champion of the desert who has run out of things to win in North America. It’s also very telling of a prodigy who was hand picked by Quinn Cody and later groomed by the winningest motorcycle company in history and taken in by Hall of Fame’s Johnny Campbell, a one-time prodigy in his own right.

Brabec is fresh off an OA win in Morocco last October, his first of such at the final stop of the FIM Cross Countries Championship. He said he is more focused than ever on Dakar and deeply invested in many ways, spending time and money to ride any and all roadbook training stages he can find. His performance in the first half of last year’s Dakar showed he can intentionally back off the throttle to poise himself for making history. After the rest day, he started on his attack, advancing himself from 20th seed to ranked 6th overall before a mechanical failure in Stage 13.

“New Ricky realizes what’s at stake and the opportunity he’s been given”, Brabec continued speaking in the 3rd person as he recounted his transition from youth to manhood and the prospects of being the first American to win off-road’s most demanding race. Only after making the turn and exerting himself did the new Ricky manifest and he credited others for seeing the spark of fire he put to his own feet.

“I think everything lined up for me more when people saw I the hard work I was putting in and where I came from being that young, sloppy disrespectful kid that I made a huge turn around in my  life.”

The former Moto and Supercross hero followed his heart into rally racing after his first try at the Sonora Rally and hasn’t looked back since. Last year as the new guy and the oldest rider on the Rockstar Husqvarna Factory team, he blended in at the Dakar and quietly improved from 54th seed to 17th OA. Amazingly however, he finished the last 2 stages riding with a broken ankle and he credits the surreal state of being at the Dakar with pushing himself to the podium. 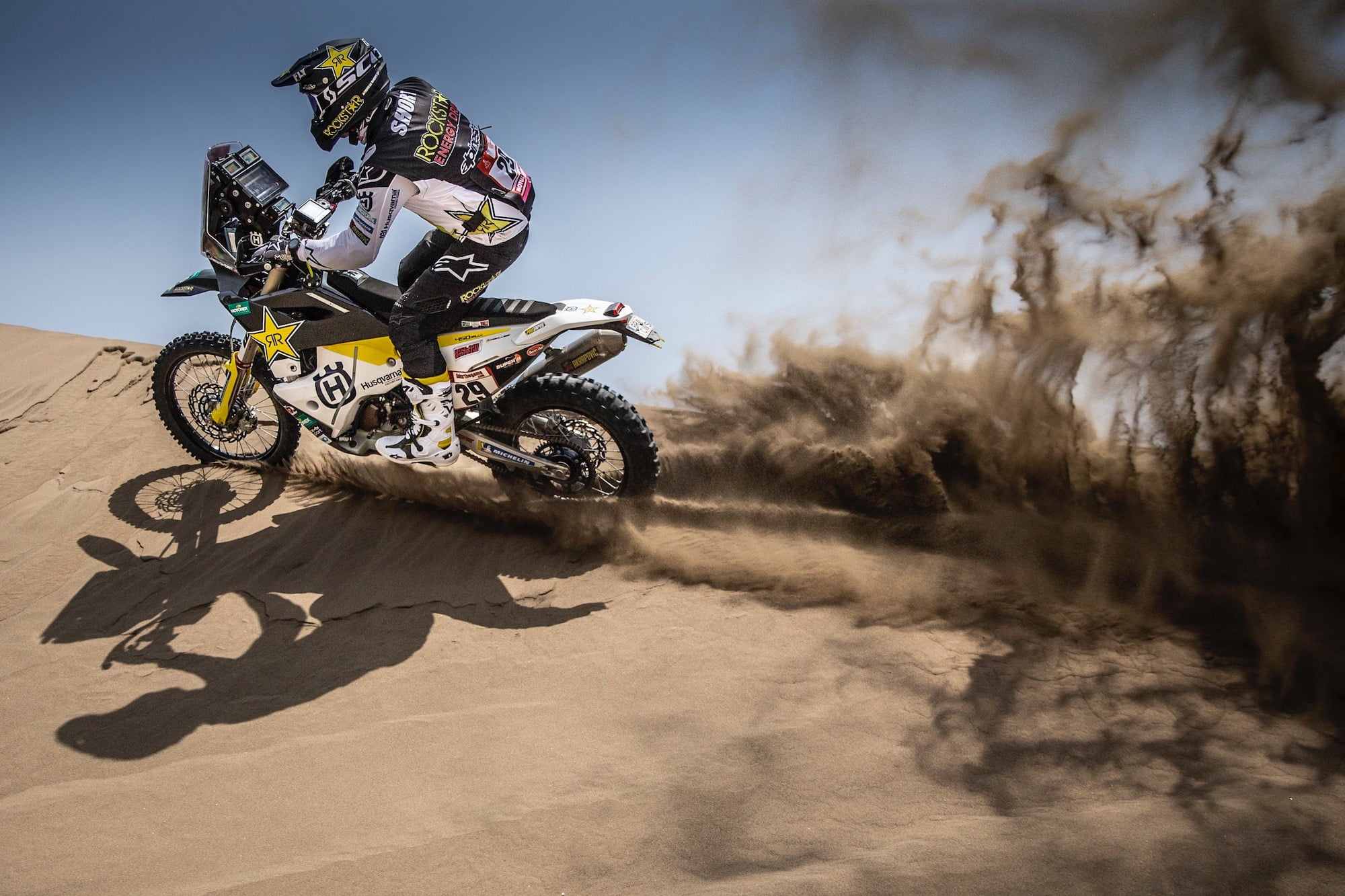 “I realised immediately it was bad”, Short recalls of the crash and resulting injury, “It was pretty crazy to carry on with a broken ankle and I wouldn’t have done it for anything else. I wanted to at least finish.”

In one manner of thinking, Andrew Short is an important torchbearer for aging American racers to turn to rally racing before making their final approach to calmer pastures. In another manner, Short still has some fight left in him and wants to run with the elite racers.

“For me a good result isn’t a number, it’s being competitive, it’s being in the race with the top guys. The guys I’m riding against are legends. I’m just the oldest rookie.”

From an analyst perspective, a win is unrealistic but blending his wisdom and knowledge to vie for a top 10 is not too far fetched. 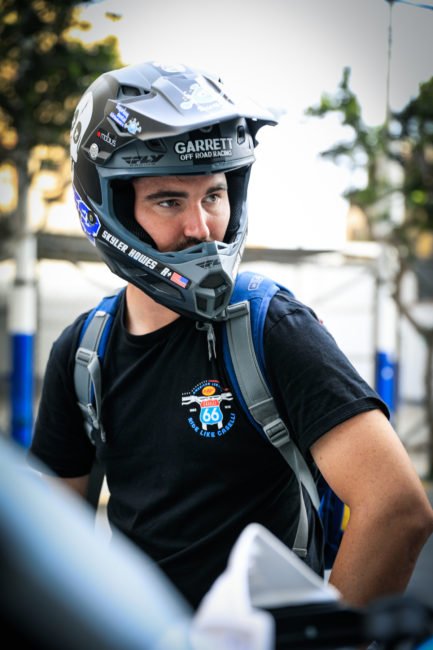 A prodigy of Chris Blais, one of only 5 Americans to ever stand on a Dakar Podium top 3, Skyler Howes has the most to lose of all Americans at this years Dakar. He’s likely to be added to a factory program later in 2019  if, and only if, he can deliver his rented KTM back to Lima in one piece. There is a lot riding on this because it could mean the difference of ever getting another shot with the big guys. His stated goal is reflected in the prospects of top 20 or better.

A big, fast warrior carrying as much humility as huevos, the young Howes has earned every bit of respect and honors he’s afforded. Win’s at both Sonora Rally and BAJA RALLY in his 2018 rookie year were no fluke and being taken in by team owner Garrett Poucher (#71) was the extra pull he needed to fund his effort after winning the Dakar Challenge in Sonora. Still, though, it has come down to crowdfunding and selling t-shirts to make his way to Peru and, for such a promising talent, this can only happen once.

Howes is riding under the small, privateer Czech team of Klymciw with Poucher and Petr Vleck among 2 others. There is enormous pressure on this team, which helped Vleck get his last 2 finishes, to support Skyler to a solid finish. Unlike Andrew Short’s Cinderella Story of 2018 on Husqvarna, much of Howes’ fate is beyond his control. Behind the scenes Garrett Poucher is essentially riding for Skyler Howes, whether either will admit to that or not.

“My biggest concern is to have a mechanical issue or to crash. Rally racing isn’t a team sport but it helps to have Garrett (Poucher) at my side.” 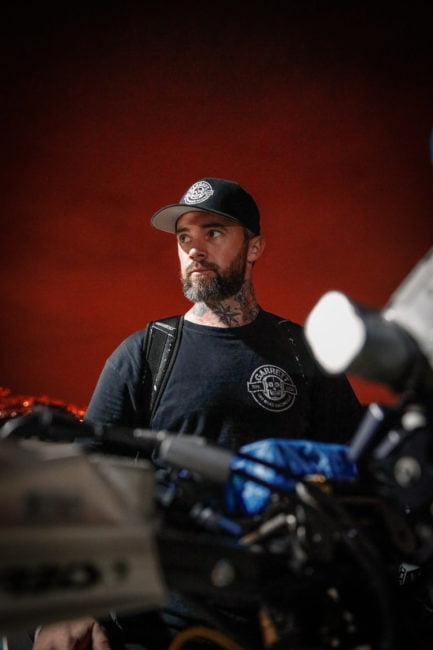 Poucher (“poo-shay”) is a crucial player in the entire field and holds a few of the keys to America’s future in rally racing. In a smaller way, Garrett Off Road Racing is the Robby Gordon of the rally bikes because he’s investing in the future and the youth. Gordon’s Dakar legacy may come down to his being the first American team owner to field a winner and the same could hold true for Poucher. Garrett is very outspoken and comes across as volatile. Beyond that character however, is a very calculating and clever mind who “wants to help build the sport.”

An incredible competitor who is not to be underestimated, Poucher cannot ever win the Dakar Rally with motorcycle boots on- and he is wise enough to know this. He has blown a few minds in his short rally career beginning at the 2016 BAJA RALLY- and he’s blown at least as many turns in the following 2 years. The most likely outcome for Poucher in 2019 is sacrificing his own rally to help teammate Skyler Howes finish as strong as possible. You should expect exactly that and, with a little bit of luck, Garrett and Skyler will be back in 2020 and prospects for Skyler to compete for a future win. Both of them finishing strong in the top 20 is a stretch and one (the older) will need to suffer for the other.

Most rookies at the Dakar have hard pills to swallow before acclimating to the immense challenge, especially in the modern era. Garrett Poucher and Skyler Howes have both achieved great success in off road and rightfully been forewarned about the monstrosity that is “Dakar”. There’s is the best show in the house for the US next to Brabec and the “elites”. Garrett is correct in saying that “The media attention in the US is mainly focused on the top riders. There’s not much for the others” Perhaps so but, as you can see from our analysis, we at RDC are watching and following carefully. Most all of the pressure is on Garrett Poucher & Skyler Howes

Walch has 4 Dakar Stage wins since 2005 and will be at Robby Gordons right for his 6th time. A bike-guy at the core, Walch was part of Red Bull KTM USA’s Dakar Challenge that earned him and Chris Blais their first shots on main stage in 2005. Walch won the final stage 16 that year arriving into the capital of Senegal.

Robby Gordon is passionate about everything he does and that is more of a liability than an asset because he does so much. The man (Gordon) who could be the first American to win the Dakar Rally has odds stacked against him this year(at 40:1) because of lack of year-round dedication and an unproven car. On the bright side however, all of this experience and passion will likely lead to Gordon grooming tomorrow’s future Dakar champions on his planet. He is, for this reason, still the best chance for America’s future in this sport on the big stage.

Max Eddy Jr. is a blue collar racer if there ever was one and picked by Gordon’s team to navigate for the young SST driver Cole Potts. Before learning to navigate roadbooks on a bike, Mad Max won a ton of SCORE and BITD races, including a Class 21 Baja 1000 Title with Ricky Brabec in 2012. But at his first shot as a co-dawg, MEJ traveled to China and won a stage navigating at the Silkway Rally before a mysterious departure. Robby Gordon has chosen extremely well with Max because anyone who knows him will attest to his loyalty and hard work ethic.

He’s easy going and fun loving when the time is right but knows how to roll up his sleeves and work his ass off. That is exactly what he needs to do for Cole Potts have if they hope to finish and continue careers in professional rally racing. Again, Robby picked a winner in Max Eddy Jr.

Bill Conger #367 – Alternate Navigator for Blade Hildebrand
Prospects: Likely ride for 2020 if they can finish in top 30%

Bill Conger was picked to take Jonah Street’s place as part of Gordons Textron effort and for good reason. Conger is no stranger to rally and a 3-time Dakar entrant. An OG in the US underground rally scene, we know him from numerous appearances in the BAJA RALLY and Sonora Rally. Last year in 2018 Conger carried himself on his own dime from 105th seed to a 66th place finish. That’s not the only reason he was on Jonah’s downline. Conger is living proof that a rally-afflicted engineer-type can make it to the big leagues.

If either rookie teams of Potts/Eddy or Hildeblade/Conger can compete and finish at a high-level they will be insulated and ripe for future programs. Conversely, if the gremlins get to both of them, everyone’s future is jeopardized on the big stage.

It’s become apparent that Gordon and and money-people intended to make their teams “all American” because there are plenty of non-US navigators for hire to ride shotgun with these young rookies.

S
Scotty Breauxman
Garrett volatile?! lol I have felt the lash of his volatility and lived to tell the tale! Truth is he's a consummate professional and loves what he does. Can't wait to see them both compete.