Preference:  Charlene Bower and Ladies Offroad Challenge winner Megan Stevenson will be reporting live from the 50th Anniversary of the Baja 1000 as they expose the complexity of the BFGoodrich Tires Pit Support Program, highlight all the ladies racing, and of course, talk racing!  This article is by Megan Stevenson:

In all the hustle and bustle of the race scene, you tend to miss or not get the opportunity to experience some of the more beautiful things about Baja. With this being my first trip to Baja, these are the things that really stood out to me over the last 12 days: The Terrain throughout the trip varied so widely. It went from flat desert terrain to rolling hills made up of boulders and cacti, wide desert canyons full of rocks to sandy oases full of palm trees, stunning green mountains jutting up into the heavens to striking blue-green ocean water. It is genuinely hard to describe in writing exactly what I saw. I think I did it best in one of my daily posts about traveling across the peninsula: “Inland roads wound their way through canyons and mountains that could rival The Grand Canyon, a desert landscape that gave way to a small town tucked into a lush oasis, and clear blue-green ocean water lapping against rocky shores made a stark contrast against the brownish-beige mountains adorned with varying colors of scrub brush and cacti. It was breathtaking.” We got to see multiple beaches on both the Pacific Ocean and Sea of Cortez. The view at night from the Estero Beach Resort is beautiful. There’s a knee-high stonewall that borders the courtyard area separating you from the rocky shore of the Pacific Ocean. Across the bay, you can see the glowing lights of other small towns.

Cutting across the peninsula headed towards La Paz there is a section where you’re winding your way through the mountains and then, suddenly, come around a turn and you’re at the ocean. Rocky islands topped with green shrubbery contrasted the colors of the water and surrounding mountains; it was picturesque.

The town of La Paz is set right on the Sea of Cortez. Our hotel was right on the ocean. The shores were rocky, but they had a retaining wall built and sand brought in, so you could sit on the wall with your feet over the edge. 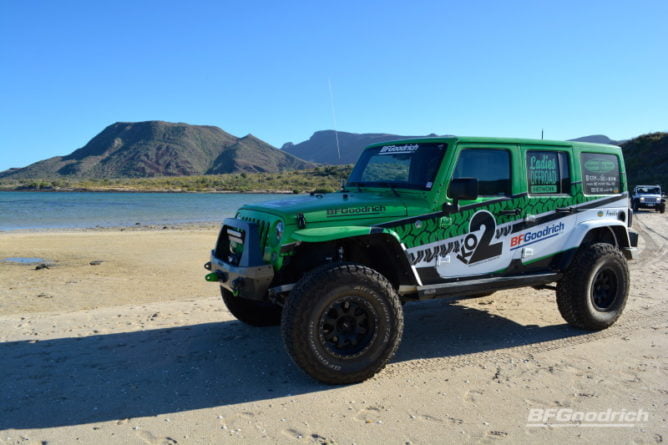 During our trip from La Paz back up to Ensenada we stopped along the coast of Hwy 1 at this neat beach/peninsula we had seen on the way down. When we got there the tide was out, so we were able to drive out onto the sandy peninsula. When the tide comes in it disappears, but when it goes out it provides a really pretty place to drive your vehicle out on, relax, and explore a little. The water was a beautiful clear blue-green color with a variety of different types of shells all over the beach. It looked like something straight off a Corona commercial or in a magazine. 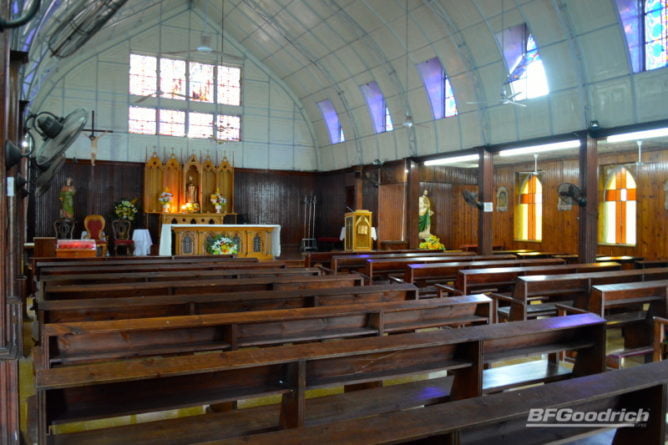 We got to visit two missions. The first one, Parroquia de Santa Barbara, was located just off Hwy 1 in Santa Rosalia. It was first exhibited at the Worlds Fair in 1889. Acquired in Belgium and shipped to the Santa Rosalia port, it was put in place, blessed, and put under the protection of the miner’s patron, Santa Barbara. The steps leading up to it were really long and wide. Inside were a ton of old wooden pews, an old confessional, and seven really beautiful stained glass windows. This is the only mission in Baja that has a very French flair. 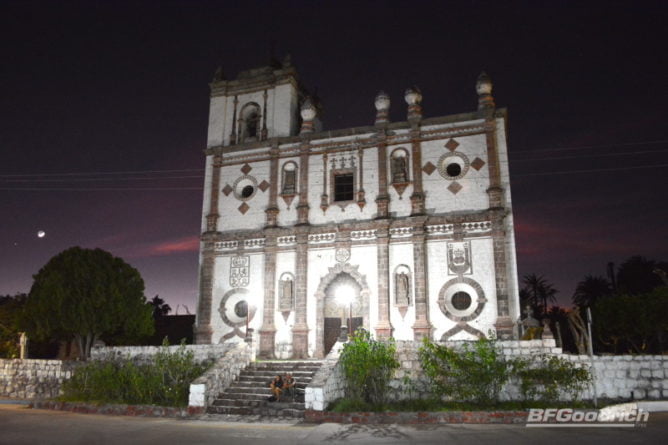 Our second Mission stop was in San Ignacio. It was founded in 1728 and wasn’t finished until 1786. This one was definitely way older with a completely different look to it as it didn’t have the French influence that the first one had. It was dark outside by the time we got to this one, so it was difficult to see, but the cobblestones that we got to walk on were really neat. From what I could see, the stonework of the building was really amazing. It was hard to imagine how, at that time, they were able to build something this grand. The gardens and trees that surrounded it were very well cared for and kept up nicely. 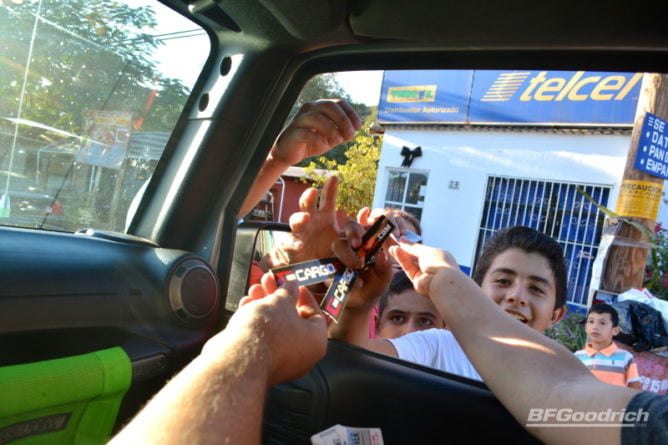 Never in my life would I have guessed that stickers could be used as currency. All of the kids and even some of the adults covet stickers. Numerous times as we drove through a little town there would be kids lined up along the roadside, jumping up and down, waving their hands, and yelling with cardboard signs that had the word “Stickers” written on them. As you slowed down they would charge towards your car with their hands outstretched yelling, “Steeeekers?! Steeeekers!?!” As you handed them a sticker through the window they would take off running for the next vehicle. 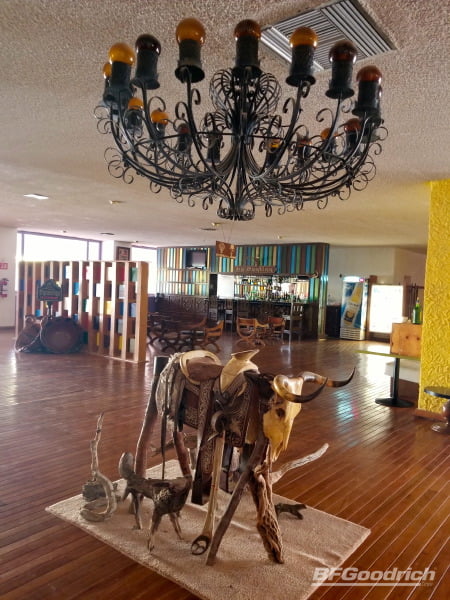 No one really talks about the challenges of staying in the Baja hotels. All the hotels we stayed at were really nice hotels for Baja, maybe 5 star on their ratings. Our challenge actually started in San Diego with the shower pressure, and that theme held through until the end. At the Handerly in San Diego there was zero water pressure; the water got hot but the lack of water pressure made washing the soap out of your hair very interesting. The next hotel we stayed at was the Corona in Ensenada. The water pressure there was amazing but the water never got hot, so now we were able to get the soap out of our hair, but it was pretty chilly while doing so. The third hotel was The Grand Plaza in La Paz. This one had hot water (yes! there’s one) and decent water pressure (score, there’s two!), but the tub didn’t drain (awww, dang it!!) so once you got out you needed to wash your feet again. The fourth hotel was The Halfway Inn Hotel in Guerrero Negro. This one had the same struggles as The Grand Plaza; it didn’t drain well so once you got out you felt like you needed to wash your feet again. 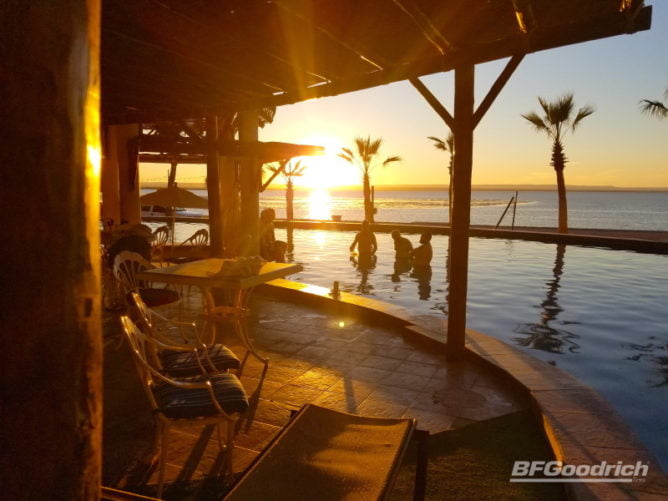 Then, there are the beds which were, for the most part, all very comfortable, but the Halfway Inn had an interesting lean towards the head of the bed. Of course, I may not have been entirely qualified to judge a bed as the moment my head hit the pillow I was seeing the inside of my eyelids, and we were usually up at the break of dawn to do it all over again. We found a place in Ensenada that offered tacos and beer as a combo on their menu. Their food, especially the homemade tortilla chips, were amazing. I got to eat tacos al pastor for the first time. The tacos were delicious but way greasier than I’m used to. There were several places we ate on the Malecon in La Paz. One had pretty great fish tacos and another had amazing cheese raviolis. My favorite of all the places we ate was a place outside of Guerrero Negro called Mario’s. It was a huge round tiki hut made out of cactus that served two medium sized lobster tails, veggies, rice, and soup for $17. The lobster came dripping with garlic butter. It was delicious! One of the things I noticed right off the bat once we were in Mexico was the road signs. They are generally the same as the ones in the California but their subtle differences were amusing and oddly endearing. I am used to seeing deer, bear, and tractor crossing signs, but here all you see are signs with cows on them. At first glance, the cow sign kind of looked like a bighorn sheep mixed with a buffalo. There is another sign with two cars next to each other and a red circle crossed out over them. At first, I thought it might mean no parking alongside the road, but I was wrong. It is actually a no passing sign. There is another one with a road and three squiggly lines horizontal across it. Fog was my guess, but nope, it’s a warning that a low spot in the road is coming up with possible water crossing it. All in all, I’ve learned a lot about Mexican street signs. 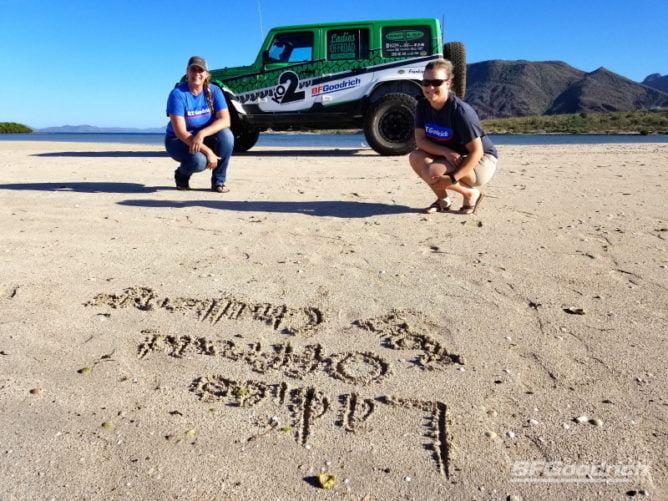 These are only a few of the things that stood out to me as exceptional about my Baja experience. These may be a bit odd but they are all things that I will look forward to the next time I visit this extraordinary place. I don’t view any of them as negative, just unique to this setting and in that, I find beauty.