Preference:  Charlene Bower and Ladies Offroad Challenge winner Megan Stevenson will be reporting live from the 50th Anniversary of the Baja 1000 as they expose the complexity of the BFGoodrich Tires Pit Support Program, highlight all the ladies racing, and of course, talk racing!  This article is by Charlene Bower from PIt 5: 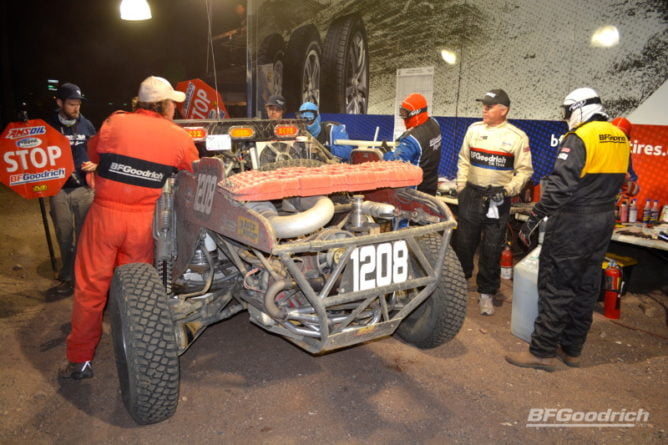 We arrived at BFGoodrich Tires Pit 3, and the first thing I saw was the BC1 driver change of Lance Clifford and Larry McRae standing there waiting for their car. I also saw Jessi Combs’ second co-driver waiting for her to come in. Yes! We are in the right place at the right time. 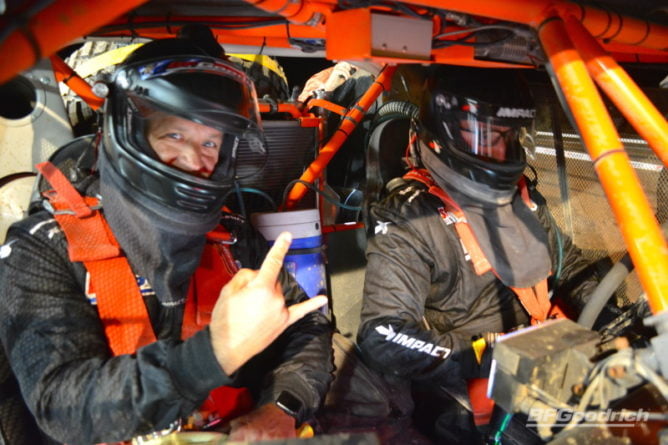 BC1 came in over 30 minutes ahead of their competition with Brad Lovell in the driver’s seat and Brian Finch who had driven the first leg. BC1 had started last and had passed all the BC cars by Pit 1. At Pit 2, they had a CV boot rip, so they decided to replace the full axle and got passed by 2 cars. When they came into Pit 3 they were back in the lead and handed a car over to Larry and Lance with a short list of challenges. The drivers’ change was smooth and the new Mud-Terrain KM3 Tires that will be released in the Summer of 2018 look hardly driven on. 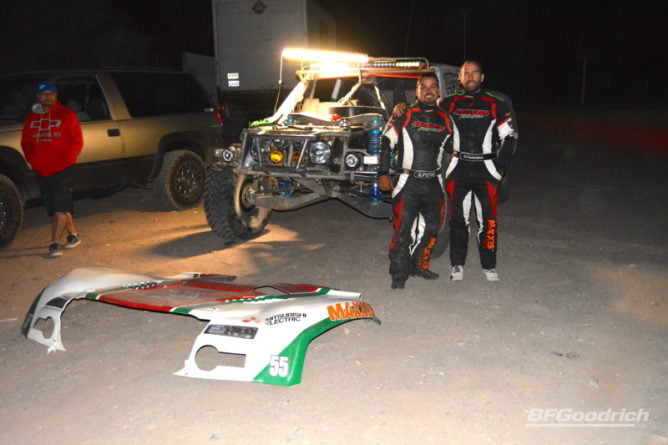 When pulling out of the Pemex in Bay of LA, we saw #55, Jose de Jesus Flores, with his hood off. We stopped to see what the challenge was – some kind of sensor went south causing an electrical motor problem. 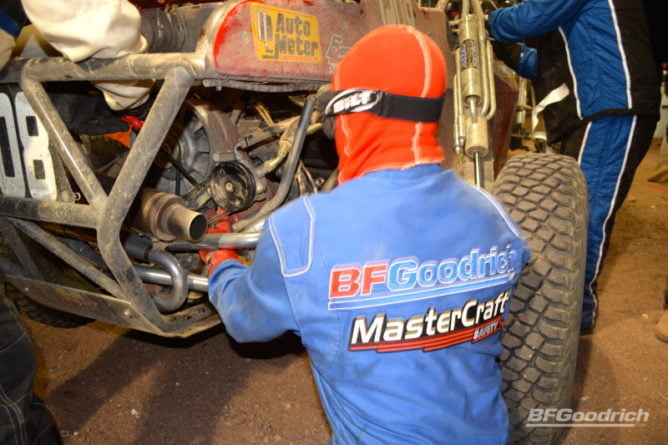 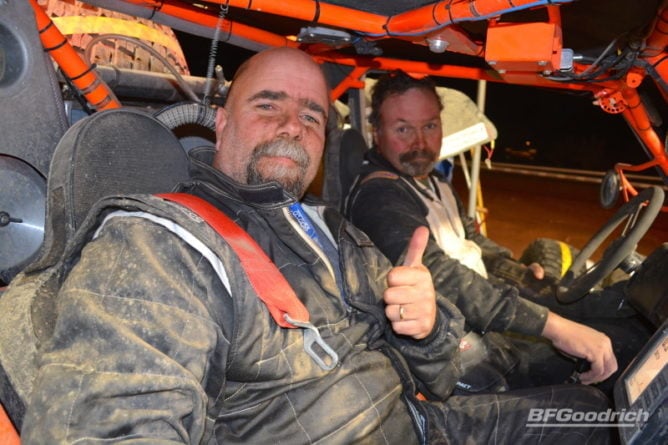 They Even Tie Shoe Laces

The action started around 8pm for this pit team who was at RM388.54. By the time we got to them they had already helped a buggy with no lights, a broken tie rod, helped with a power steering issue, wiring issue, checked lug nuts, and adjusted light tabs (that were not right when they were built). 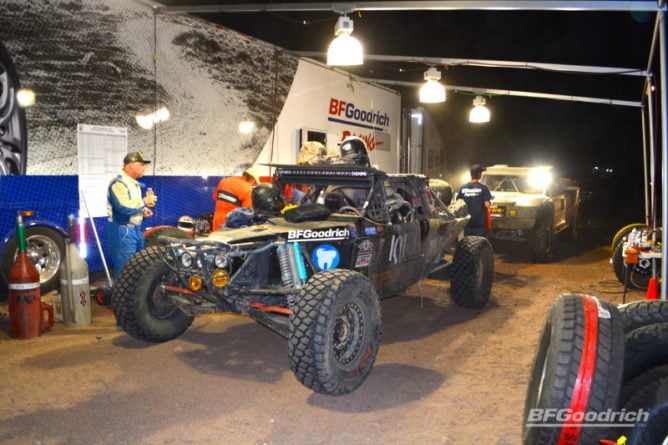 They also tie shoes, adjust seat belts, and put tool bags back together. Water was available for the drivers. Behind the semi was the fabrication shop, an EZ-up where they could work and weld. 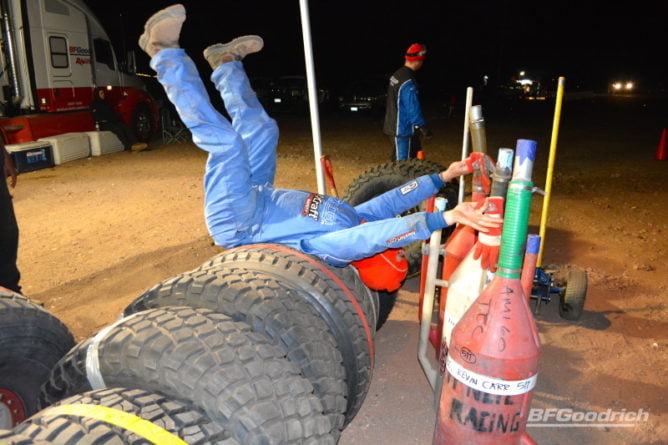 Their outhouse décor was incredibly themed. Jack Sypolt, the founder of the outhouse program, was in charge of the theme and worked with a couple of the other guys to get it done. I know we are going to show the pictures at the end, but the theme of this one is a Mexican Post Office. 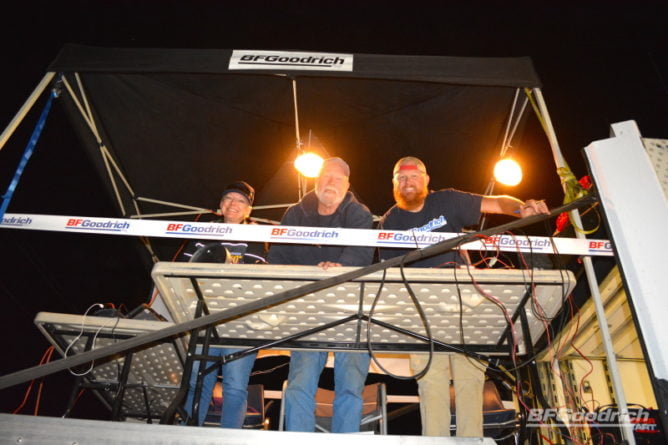 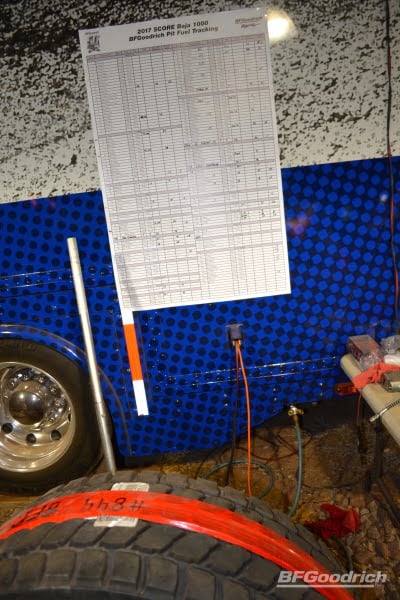 We have been checking in with BFG Relay when we arrive and leave a pit. When we checked out of Pit 3 we heard Pauline’s voice over the radio. They had a successful 6-hour mule ride that wasn’t as bad as they had originally anticipated. Since being at camp they had killed a rattlesnake and a mountain lion had wandered through to visit! Just another day in the life of a BFG Relay volunteer. 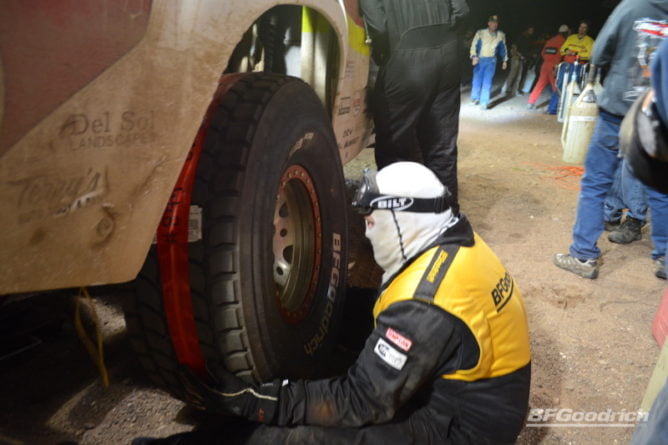 Our ride to the pit was eventful. We stopped for some quesadillas in Valle de Trinidad and then headed over the crossover road. About 30 minutes in the road narrowed, and we knew we took the wrong turn and was headed to Mike’s Sky Ranch. So, we backtracked. When we got back on the right road we were headed over the mountain. To our surprise, we didn’t see many chase teams out there; it was a pleasant and beautiful drive. 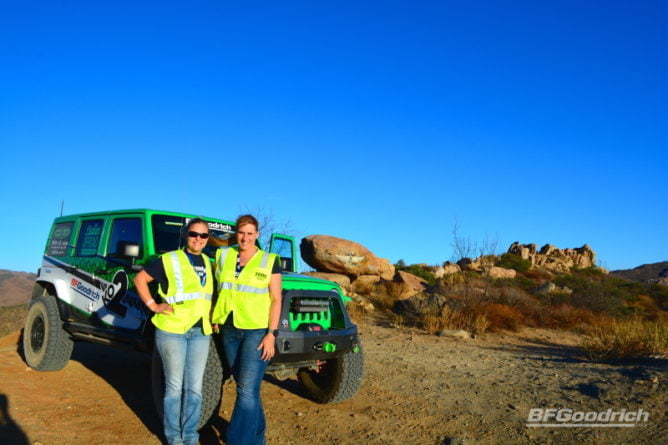 As we jumped on Highway 1, the asphalt was a welcome sight, especially for me who is living in the backseat of a JK typing away! I typed and typed until the battery said no more! It was nap time for me and apparently, I snore, but I think they are just harassing me. Rich got his first good nap while at Pit 3, and Megan got a fast nap in the Jeep. We arrived at the pit at 10:15pm on Thursday and left for Pit 5 at 1:15am Friday. 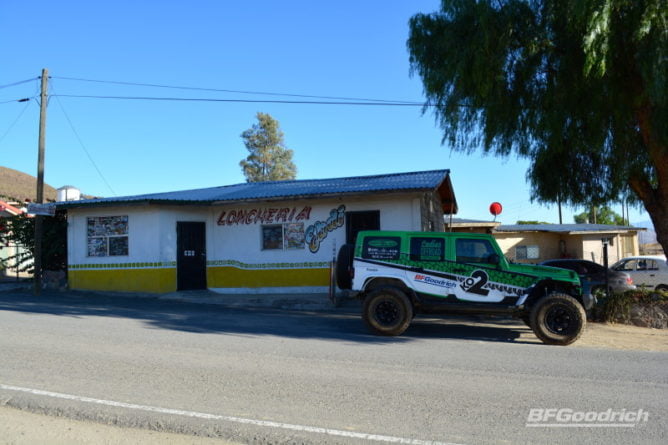 When the race course joined us on the pavement I made sure to ask Rich if he felt like a race car driver. He looked back at me with a weird face – “Well you are on race course right now!” We all laughed. The jokes in here are thick and some serious inside heckling is being created, you know, Baja Style. 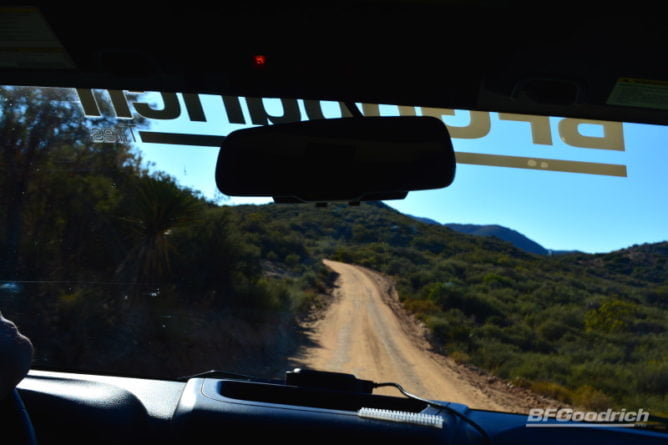