Preference:  Charlene Bower and Ladies Offroad Challenge winner Megan Stevenson will be reporting live from the 50th Anniversary of the Baja 1000 as they expose the complexity of the BFGoodrich Tires Pit Support Program, highlight all the ladies racing and of course talk racing!  This article is by Charlene Bower from Pit 6:

Apparently, the race was won while we were in Pit 5. There wasn’t any cheering or celebration, the crew had their heads down trying to help the rest of the teams get to the finish line. Sometimes, those at home know more than we do, in fact, let’s say most of the time. Congratulations (unofficially) to Apdaly Lopez and Cameron Steele on their 50th Anniversary SCORE Baja 1000 presented by BFGoodrich Tires 1st and 2nd finishes accordingly. With jumping from Pit 3 to Pit 5 we interestingly had a lot of the same cars come through the pits. It was fun to see the drivers and co-drivers again. The BC1 BFGoodrich Tires car pulled in where Larry McRae jumped out and Bill Weber got in. “The silt and fog was knarley,” said Lance Clifford. The CV that was a problem at 3 was still in the same shape, which is good news. 303 Dan Chandler and Joe Haight had just gotten out of the car after being in it for hours. This was Dan’s 23rd Baja 1000 but first time driving, and he was super excited. His exact words were, “It’s f**king awesome”. 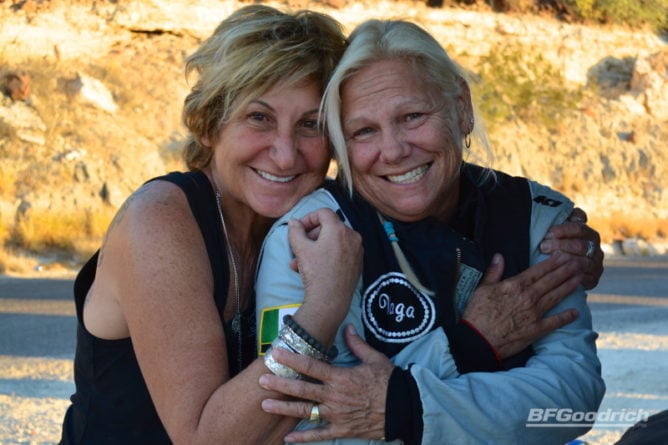 Claudia Saldana is exhausted already from chasing and will be getting in the car soon. She has been working in “unorganized insanity.” Her favorite part is Perisma. You come out of a very harsh and tough terrain and then see an insanely beautiful blue ocean; it brings tears to your eyes.” She was getting emotional and tearing up. Diane Giannelli had just gotten out of the car and said it was really rough,and the terrain is beat up. When asking about her experience, she said, “I’m parallel, I can’t imagine not doing it.” A third lady, 3068 Maria Fraser, is sore but good from her first section of racing. “The dust at night was crazy,” but she had been able to get a few hours sleep, and she was rested and ready to get in for the next section. Just as we were getting ready to go, we heard Rod Hall’s truck was coming in with a tweaked center link. Rod Hall did start his 50th Baja 1000!

Communications and Giving Back

“This is the busiest Baja 1000 I’ve ever worked,” said seasoned veteran, Richard Winchester, who had Colin total the gallons of fuel they had dropped up to that point: 520! We have never had time to get bored. We have been rocking and rolling since the first Trophy Trucks came through around dark last night. The group concludes that they loved the format of the bikes leaving out early to let the trucks loose with no lulls. There were times the pit was 2-3 vehicles deep with the Emergency Only teams asking for help. “They are lucky we are here. They considered us an emergency stop but we were a necessity to their race. You hear those guys say. ‘Thank You’ even more,” said Greg. 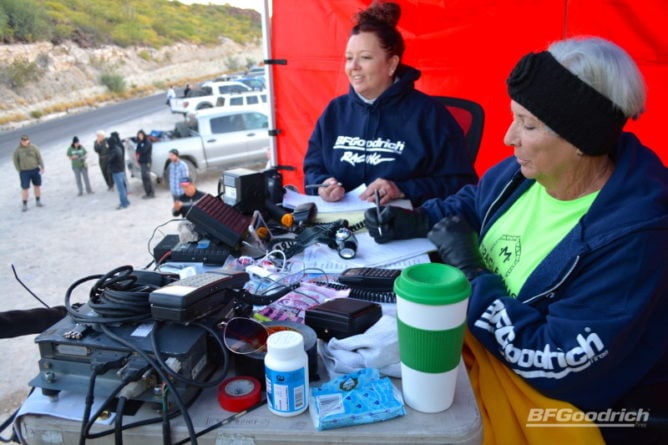 The communications team that sits up off the ground is an integral part of the process. In Pit 5, Jennifer tracks who comes through their pit and what time they leave. If the car calls in to them, she tries to yell down to the guys that they will have an oncoming car to process soon. If Central doesn’t check in with them, when she gets about 15 cars she calls in with them to give the times. Central is the group in South Carolina that is collecting all the data for relay and tracking. Jackie’s job is to track them from the previous pit. So, when Pit 4 calls that a team has left, she writes that time down. “The whole thing takes a lot of patience and multitasking!” 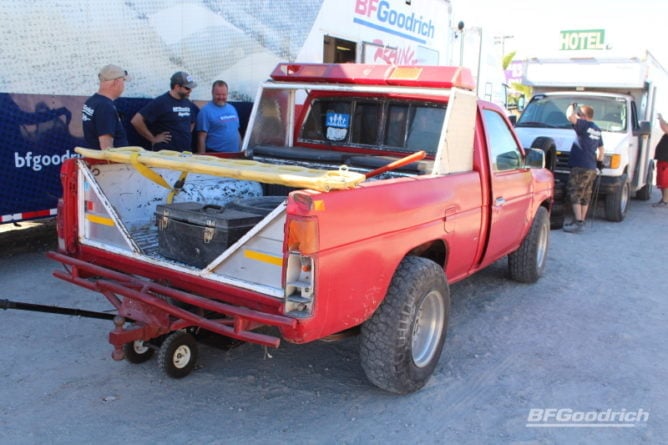 If you remember from what feels like ages ago, we talked about the BFGoodrich Tires Give Back program. The program was a success! The Pit 5 crew mounted tires for both the ambulance and the fire truck. Yes, they don’t look like much, but this volunteer department is very proud and happy about the services they are providing to the local area. BFGoodrich Tires is happy to support them. 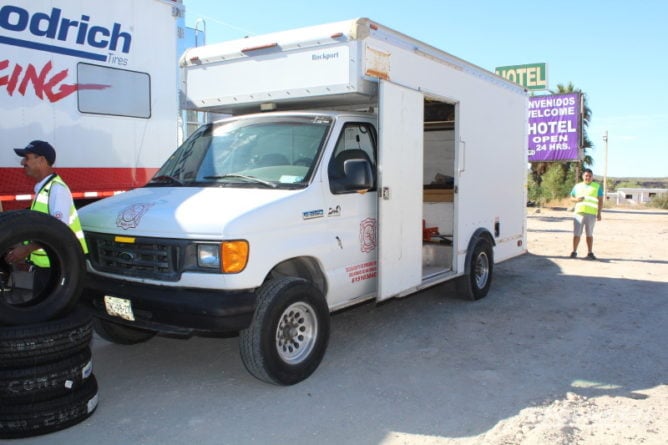 “I’m not sure how to describe these vehicles other than there were 3 lugs on a 6 lug wheel, and when we went to check the brakes, there were none! The front end had a lot of things welded together.” In appreciation, the volunteer’s grandmother made date bread for everyone, and they have been by the pit every morning to water down the dirt to keep the dust to a minimum. 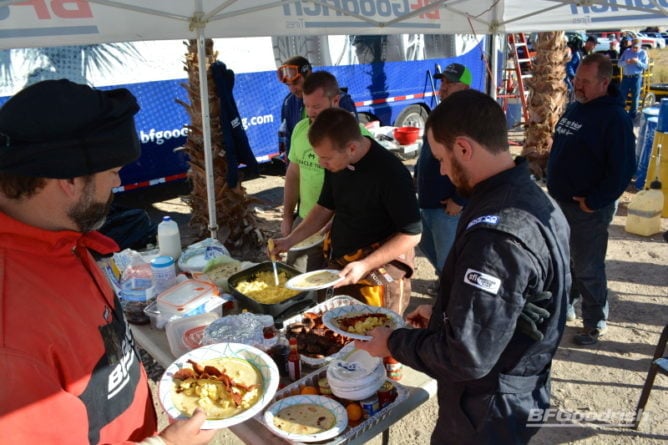 Unfortunately, Pit 5 didn’t get an outhouse. Because of the hospitalities this year, they were one short, and with Pit 5’s hotel being right behind them, they got flushing toilets. So, lets consider that a win, too – flushing toilets and running water with soap. Hmmm, maybe they still should rank! It was a long all-nighter. We left Pit 3 at 1am and knew we would be at Pit 5 just in time for the sunrise. That’s exactly how it happened. The added variable was the fog along Highway 1 – an intensity that you can’t explain. Rich kept the vehicle moving towards the pit while Megan got a nap, and I typed in the back seat. There was finally a moment where I too needed a quick nap before arriving at the pit. We found some small talk to keep each other up. Megan learned a lot of things about Rich that no one needed to know. Our favorite words are devastation, organization, and constitution. I think we just like saying –ion (roll it off your tongue, it’s fun! Or we are delirious, and it makes us giggle.) 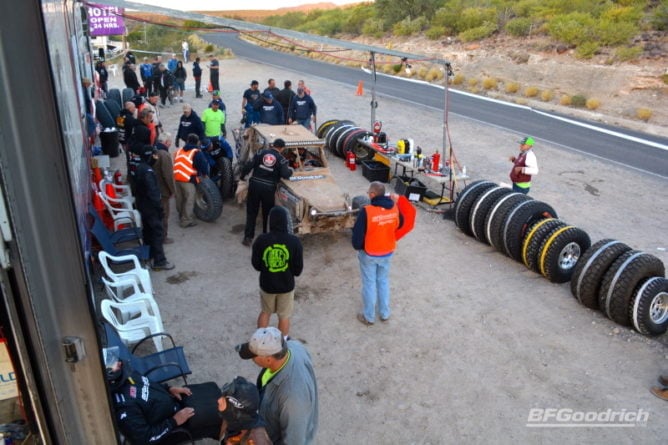 Pit 5 is a special group of people for me. This includes lot of east coast folks that I don’t get to see very often but are supporters of what I do. I appreciate them, and it was nice to be able to introduce them to Megan. We are all friends. Baja Familia.