Preference:  Charlene Bower and Ladies Offroad Challenge winner Megan Stevenson will be reporting live from the 50th Anniversary of the Baja 1000 as they expose the complexity of the BFGoodrich Tires Pit Support Program, highlight all the ladies racing and of course talk racing!  This article is by Charlene Bower from Pit 8:

As the hours click off, the BFG Pits get slower and slower. As the pits get farther from the start, the attrition rate and the distance between drivers changes the pits from a fast paced action to usually a slower, more methodical method of checking vehicles. The sun has just set 32 hours after the first green flag fell for the 50th SCORE Baja 1000. 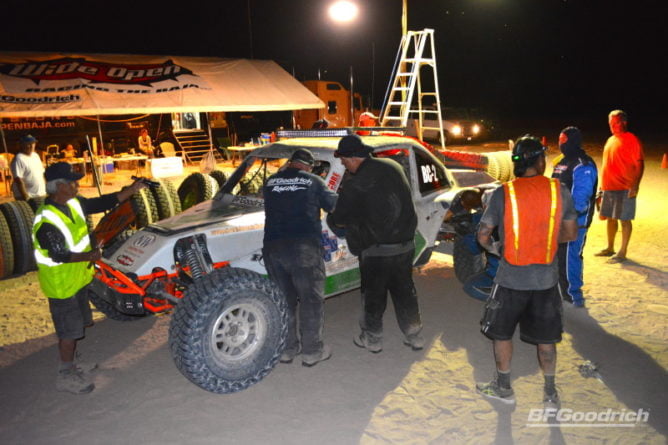 Laura Alvarez, from Spain, co-drove the BC7 car from race mile 606 to Pit 7 where she got out. This is her first Baja 1000. “The rush is my favorite,” said Alvarez. She feels very lucky to have successfully completed this challenge. 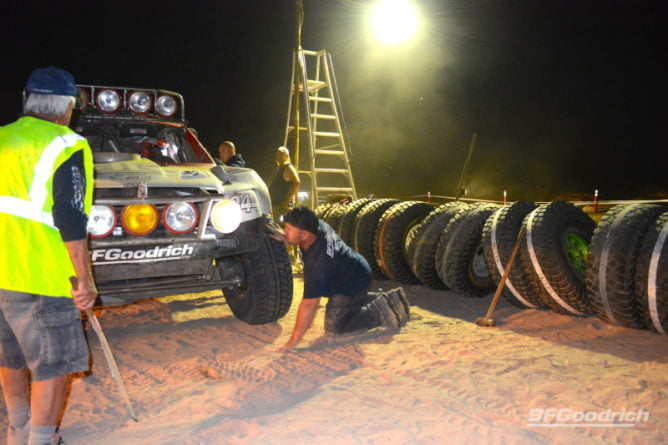 Noah Ostanik, driver of the 844 truck, and his co-driver, Brian Knight, came through Pit 7 to fuel and use the Bano. They have had a long day, replacing the transmission and welding up the passenger side beam just north of Loretto. As they were pulling out of the Pit a BC2 came cruising in. They had a crack in the driver’s side rear brake line and were losing fluid. The pit crew topped off their brake fluid, gave them a spare bottle, and off they went. 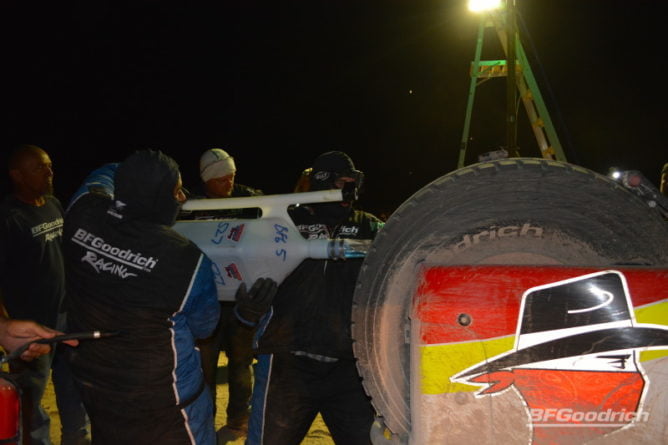 Matt, a pit person for UTV #2989 reported that they had a fire at RM100, which caused a lot of wiring issues that they had been struggling with all day, in addition to some axle issues. “We have located of your pits the whole time and your pit books are amazing. We have put 900 miles onto the new 32” UTV tire with no issues.” 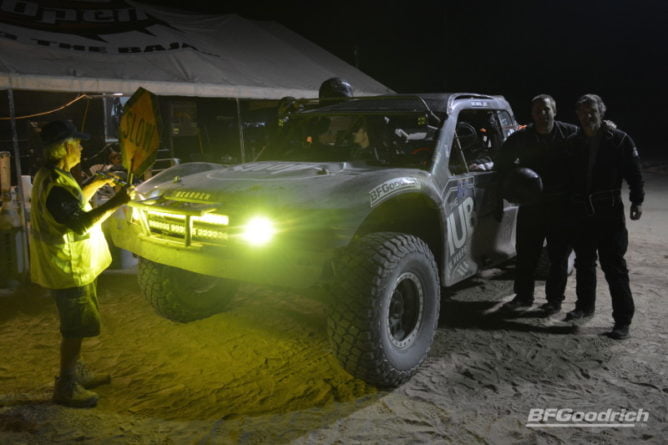 As we were loaded up and ready to roll, #217 with driver Sam Hunt pulled into the pits. “That section had a ton of water and then, right afterwards, they throw in silt – I’m wet and muddy! I think most all of our electronics are out, but we’re are having a great time!”

Gut Laughter is the Real Deal

Walking up to pit 7, the first thing you notice is all the laughter. The guys are constantly teasing each other, telling jokes, and having a grand time, but when a car or truck rolls in it’s instantly all business. This group is affectionally called the misfits. There are folks from Ireland, Mexico, and cowboys from Ohio. They all get along and laugh for hours on end. 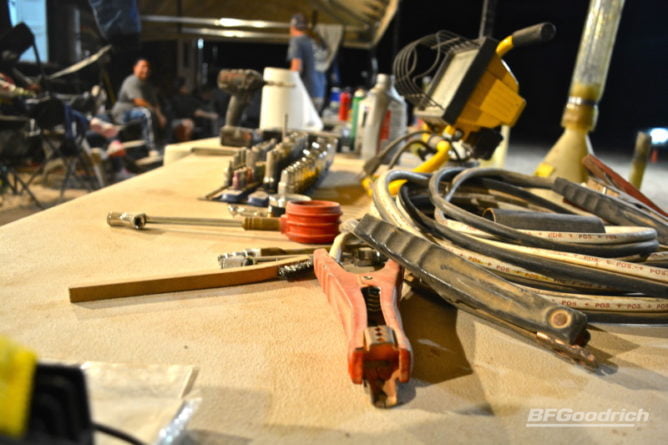 They had several welding repair jobs today. One was for UTV 1950, they welded up a crack in the middle of an a-arm. The other was for the 200 truck. During the initial inspection done by the pit crew, one of the members found a hairline crack in the frame, so they welded that up, and then did a repair job welding around the knuckles on both driver and passenger side. 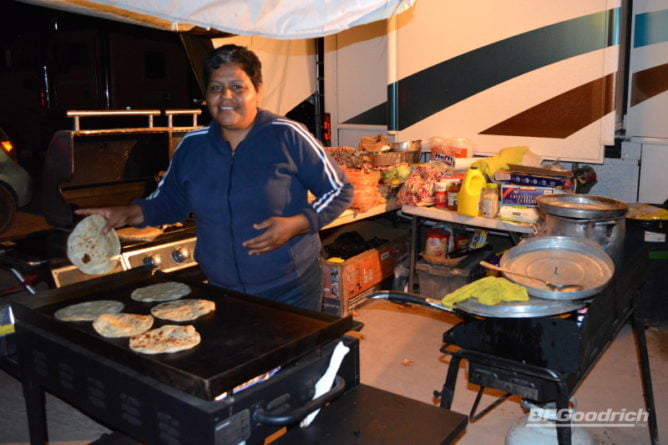 They have all their food taken care of by a local lady by the name of Francis. Everyone raves about her food; they have been having her make it for the last couple years. They also had a huge ice chest full of water and drinks, as well as RedBulls and snacks for the drivers and co-drivers. We wanted to stay for tonight’s steak dinner, but we had to go… 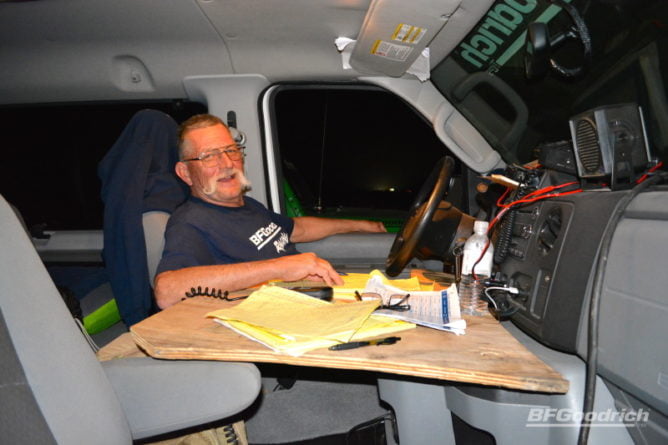 Off to the side, Don Minton sits in his van on the radios keeping track of the cars coming in. He has his fancy office set up using a piece of plywood that fits in an L shape around him. He has been using the same piece of plywood for the past 10 years! Don sits inside his air conditioned or heated van and as cars come, he honks his horn to let the guys know someone is coming. 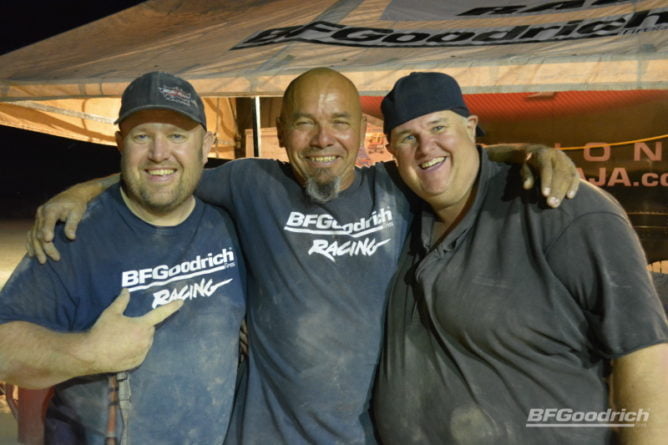 After 20+ hours of the pit being open and countless horn blows, the pit guys had had enough! The horn had to go! So, one guy started by popping the hood and shortly there were three, one that was clearly a mechanic and knew exactly where the horn cord was. It was silent. The horn had been silenced. Not a minute later, a car went by and when Don yelled at the guys for the car number, not one of them had paid attention and gotten it. Guess the horn had its purpose after all. Don went and demanded the keys to the semi… “You think the van horn was annoying?” 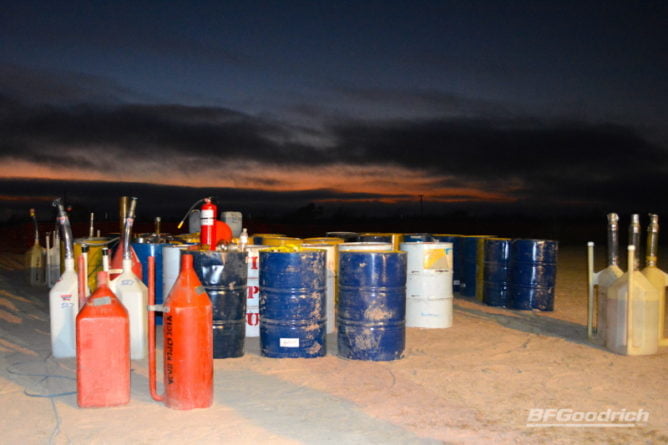 This was the shortest trip between the pits. Just about an hour. We saw cows, lots of cows. We saw desert hawks, 3 to be exact. We saw cactus and desert landscape. Well actually, only Rich saw that. Megan and I had our heads in our laptops trying to get the Pit 6 story up and finished as quickly as possible so we could be outside enjoying the environment rather than sitting in the Jeep typing our story. 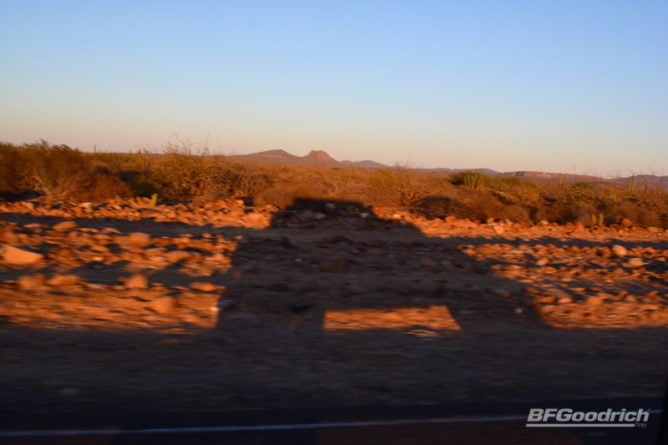 It has been a challenge to hit all our deadlines. A story, information about the racers, and pictures being posted in “real-time” is a fun task. Add the love of Baja cell service and Internet, and it becomes almost impossible. My tolerance for fast internet has to be limited to a minimum when we are here in Baja. Even when considering being in a hotel…it’s just not fast. 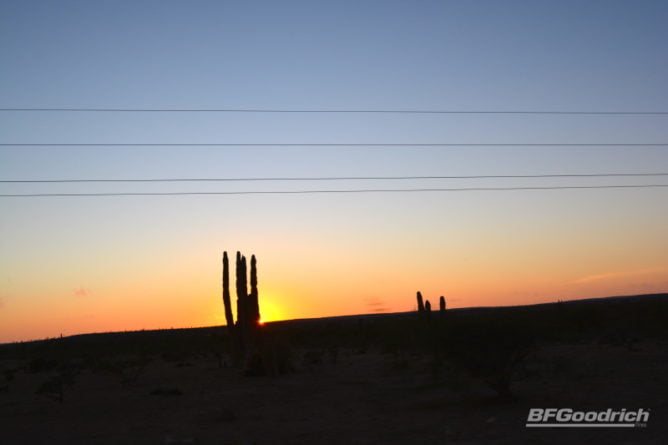 Given all the elements that could go wrong, I think our team did an exceptional job. We aren’t at the hotel in La Paz yet, but I have to give a ton of credit to Rich Klein for keeping us safe and sound as our driver and body guard. He took great care of both of us and responsibly got us down the very tough and narrow roads of Baja. 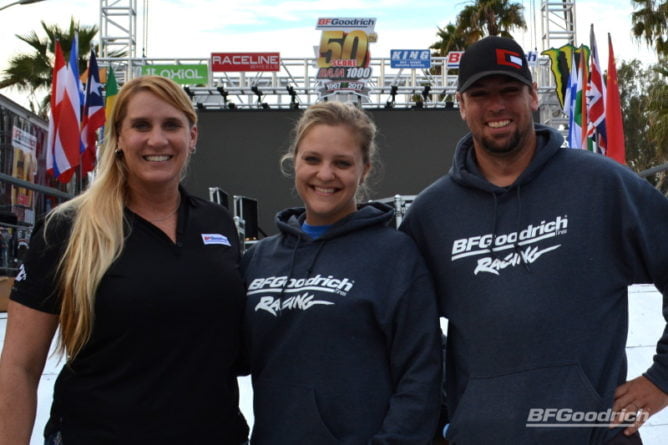 I won. We have been joking about how Megan was a “contest winner” to come down and help me. I warned her on the amount of work that this week would entail. Words don’t do any justice to her actions. Megan was absolutely the perfect pick for our Ladies Offroad Challenge Baja 1000 event. She effectively helped us keep the content at the level I demand and we had a lot of fun doing it. There may be no trophies for when we get to the finish line, but WE won.