The BFGoodrich Tires Pits are closed. The SCORE 50th Baja 1000 presented by BFGoodrich Tires finish line area is vacant. La Paz is a quiet town again. Where did all the teams go? Some left quickly, some stayed for a few days, but for BFGoodrich Tires there is a very specific plan, and we have to stick to the plan. 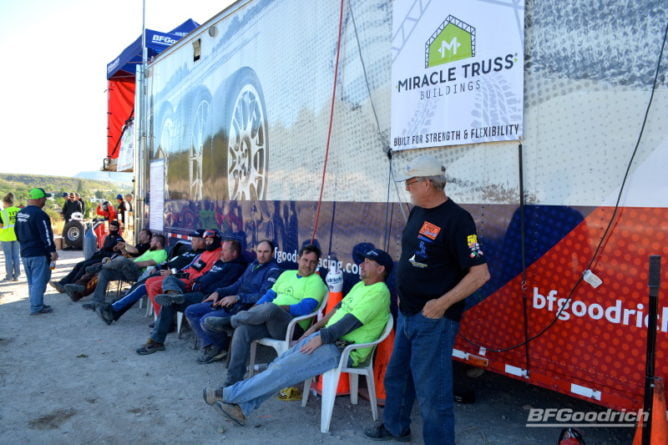 Throughout the race the BFG Pits had closing times. For example, Pit 1 at RM130 closed at 7pm Thursday night and so on until Pit 8 at RM1013 closed on Saturday morning at 8am.

Closing protocol is two-fold. The first and most important part of the equation is making sure all the racers that were signed up for BFGoodrich Tires Pit support have either come through the pit or are confirmed out of the race. There should be no racer left without opportunity. The second part to closing is getting the official word from Nate Hunt that it is okay. There may be other scenarios in the works that the Pits don’t know about in coordination with SCORE or other teams. 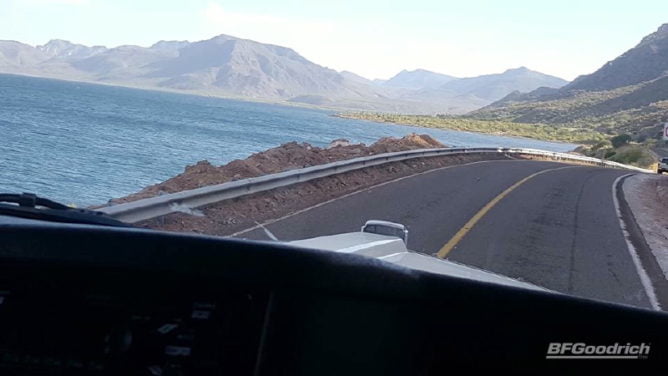 In preparation for closing the pits, all the drivers are sent to bed to sleep for at least 6 hours. The rest of the crew is asked to keep helping drivers, cleaning up, and start packing.

Once closed, the trucks are loaded, and the pit crews crawl into their vans and trucks to start making the trip north to the USA. The crews that were all smiles and rested coming down have now been up for hours on end, physically working as fast as they can to help racers complete their dreams. 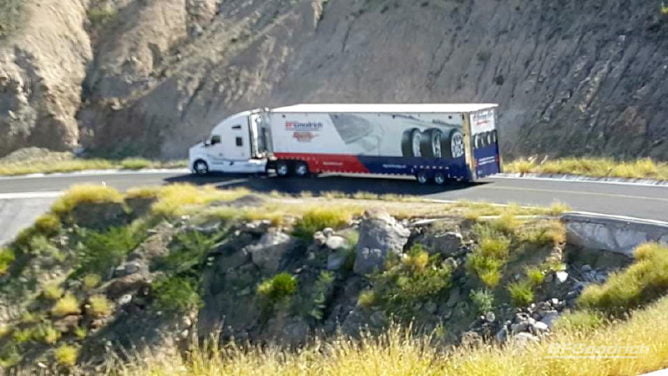 The pit groups are split in two, the same as they were coming down. The northern group starts leaving their pits and heads to a hotel local to their pits to take a shower and get a good night sleep. The following day, the group starts heading north, some straight to the border, some to Estero Beach to regroup. Once there, the semis and trailers travel to the border in a different group from the passenger cars. All crossed the border between Saturday and Sunday, hit the pit exchange to deliver the racers’ gear, and distributed people as necessary to their vehicles, hotels, or the San Diego airport accordingly. The southern group of Pit 6, 7, and 8 have a lot longer race on their hands. As soon as they close up they start heading north and to meet in Loreto. The passenger vehicles stick with the semis. At least one of the passenger vehicle runs lead for the semis and another runs as a tail gunner for the group. Surely, it must look like the Ringling Brothers circus coming down the road with 3 semis, plus all the trucks with trailers, and 15 passenger vans! The whole group rolled up to Estero Beach, and at that point the passenger cars said their goodbyes to the semis and headed across the border to deliver the people to their vehicles, hotels, or San Diego airport. Because Monday after the race this year was a holiday, the passenger vehicles were able to cross, but the semis couldn’t cross the border until Tuesday. One of the trucks was stuck in inspection for over 4 hours! 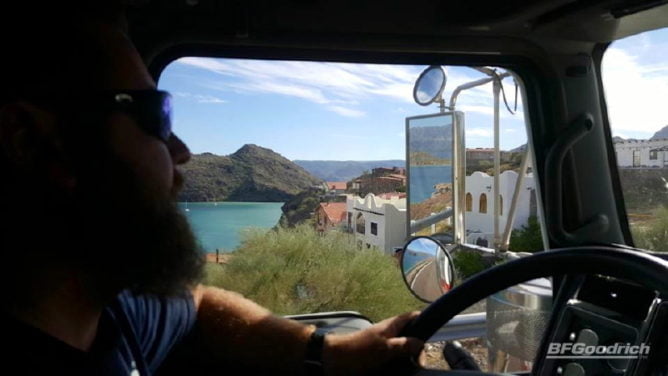 Fuel stops are interesting and expensive, as you can imagine. I may update this later as the fuel receipts come in from the trip, but consider 5 semis, and multiple other trucks with trailers, and at least 8 passenger vans. Whew! That is a hefty 5 digit number for sure! 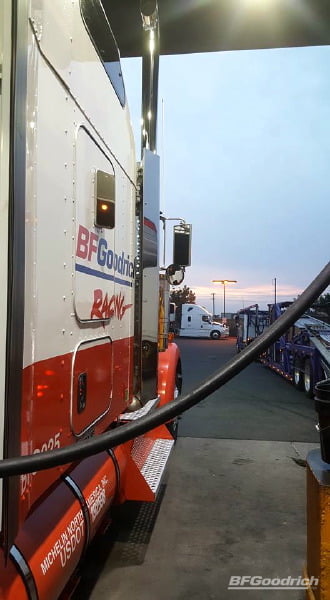 Driving a semi truck through Baja is an interesting experience! Frank Alarid gets the challenge of driving a 52 foot semi-trailer all the way down to Pit 8. “There is adventure in every trip. Coming down, one truck lost a mirror and another a turn signal. My least favorite part of the trip is called the Devil’s Elbow, it is basically from here to Loreto. There are huge grades, sometimes more than 6% up and down with turns that we can’t make in the truck with straight axles without going over the line. Luckily, we have a lead vehicle that helps spot for us around the turns and there are times when we have to come to a stop so we don’t meet another truck in a corner,” Frank said as he shook his head at moments. “It’s an adventure, but it’s worth it,” he said again. 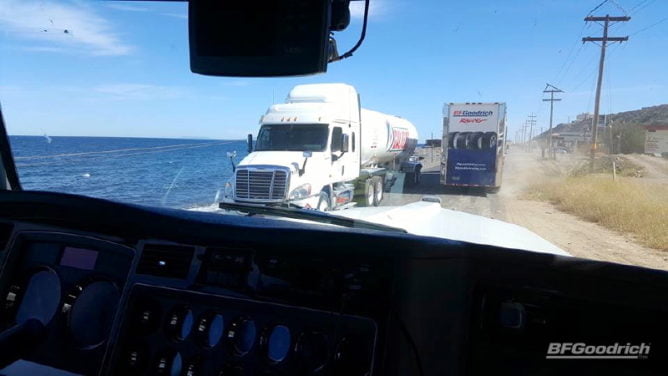 Once the truck and trailers cross into the US, the work isn’t done. There is still the process of getting the racers’ tires, fuel cans, and extra parts back to them! After crossing, the trucks proceed directly to Spirit Ranch where the Pit Leaders are responsible for making sure all the racers’ gear gets unloaded off the truck and into the space designated for that pit. They are also responsible for dropping off all their electronics: satellite phones, radios, and antennas. 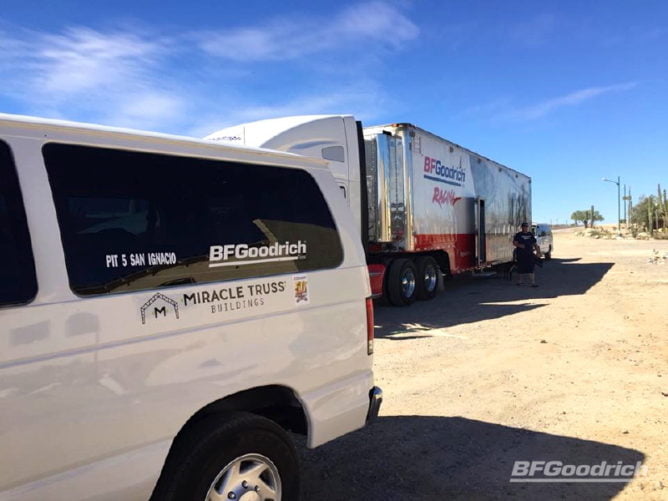 The trucks’ next stop is to the Jackson Marketing Groups warehouse where they unload all the pit gear including fuel suits, helmets, welders, camping gear, extra food, and anything else that doesn’t belong on the truck normally comes out into the warehouse. The truck is cleaned and then, the trucks that home base in South Carolina roll out, and those that home base in California park until the next event. 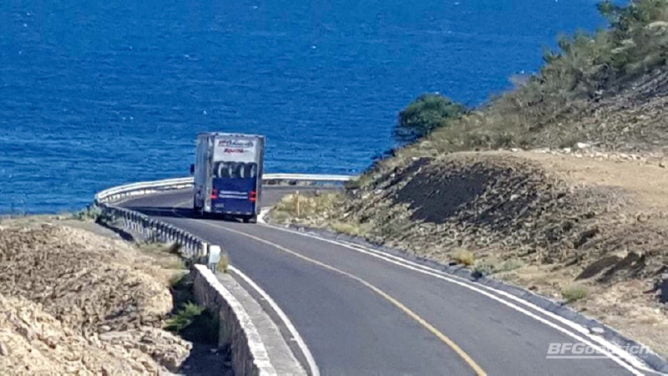 For the racers that utilized the BFGoodrich Tires pits, the pickup Pit Exchange happens the Monday-Wednesday after Thanksgiving and the Saturday after that from 8-5pm. Greg Atherton, who is in charge of checking out all of the teams’ gear, takes what the trailers dropped by and helps start to put the different teams gear into one pile, attempting to make it easy for drivers to easily roll in with their trailer, grab their gear, and pull back out quickly. 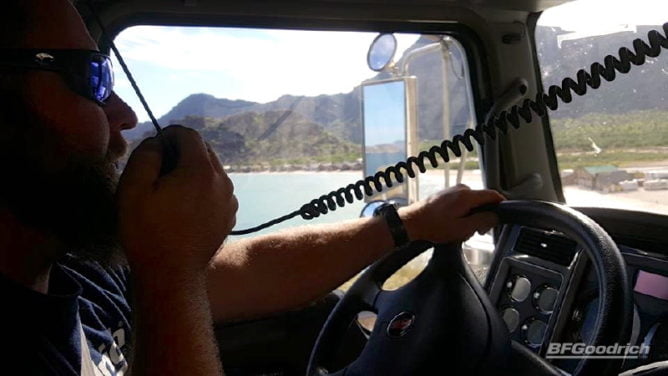 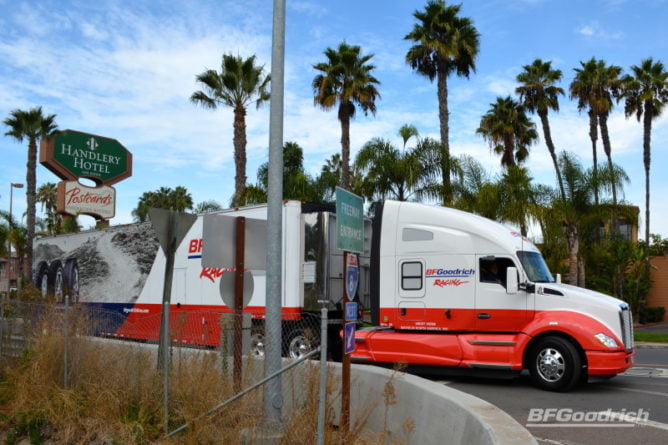 Once these pit exchange pickup days are over, anything that is left is taken to the warehouse, so teams can come and pick them up. Greg also takes all the communication tools to the warehouse and does the final check-in for the gear.

At this point, it is official -> The 2017 BFGoodrich Tires SCORE Baja 1000 Pit Program is Complete. Time to start planning for next year! Actually, the next race!