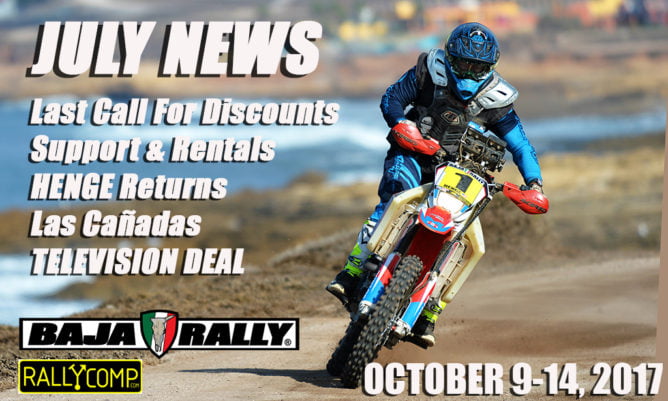 ENSENADA, BAJA CA, MEXICO- With only 30 days remaining for “Standard” entry fees and application period, BAJA RALLY announced that entrants and their teams are ramping up efforts to tackle the fastest growing rally raid in North America. After August 1, new applicants will be applying in the “Late” entry period accompanied by substantially higher entry fees and delayed access to essential information. Racers already entered have been receiving bulletins and private access to the “Competitors” area on www.bajarallymoto.com.
ESSENTIAL INFORMATION
BAJA RALLY 2017 Presented by RALLY COMP is less than 100 days from commencing an the organization has released additional details to help aspiring finishers and teams prepare for 5 days of cross country rally stages and camping accommodations in 4 remote bivouac locations, including the newly announced addition of Las Cañadas Campground for the prologue stage and departure of Special Stage 1. All of the bivouac locations, surrounding hotels (if applicable), service route and tentative schedule will be released to entered racers on August 1st.

BAJA RALLY Chairman and stage designer Scotty “Breauxman” Bloom just returned from scouting and recon mission within and around Las Cañadas, Acambaro and MD Vinos in the Valle de La Grulla with a big smile on his face and very enthusiastic about the opening stages of the 5th running of the BAJA RALLY.

“Excited is an big understatement”, explained the charismatic Bloom, “I can personally assure all riders and drivers that the opening stages of this rally will top anything they’ve seen from us in the past. Our new administration is extremely organized and we are coordinated with everyone in the area to ensure challenging and safe stage routes that are both original and unique to racing. Las Cañadas is the by far biggest and best eco-adventure campground on the peninsula and I’m sure it will make a huge impression on our racers and their teams.”

Fresh off a second NORRA Mexican 1000 win, 2-time BAJA RALLY Champion and Baja racing legend Steve Hengeveld has quietly announced that he will return to Ensenada this October to attempt his third consecutive BAJA RALLY title, hinting that he may do so inside the cage of a UTV for the first time. The future Hall of Fame racer is in talks with sponsors to plan his next move and a formal announcement.

“We found that over 90% of our earliest entrants last December are returning riders, which tells us our event has passed the “proof of concept” test”, Orellana explained, “This is opening the door to more interest from bigger sponsors and the prospects of having same-day coverage broadcast throughout Mexico and Latin America.”

MAJOR TELEVISION DEAL EMINENT
BAJA RALLY’s communications team is in talks with one of the largest TV networks in Latin America to broadcast daily stage-highlights of this years rally, fortifying the event’s position with corporate sponsors, local hosts and Mexican Governments. Bloom explained the natural order or sequence to arrive at this junction, pointing to BAJA RALLY’s signature stage-highlight videos as the catalyst for the leap into the mainstream.

“For 5 years we’ve worked with the best producers in the sport and captured our event’s racing action on digital with aerial, drone, POV and mobile shooting”, Bloom continued, “We’ve nearly perfected the process of producing the content. Now we have the attention of one of the largest media companies in the world to push the action out and to share the spectacle and rugged beauty of the Baja Peninsula.”

BAJA RALLY SCHOOL CLOSES UNTIL NOVEMBER
The first season of RALLY COMP’S BAJA RALLY SCHOOL comes to a successful close after a this month’s round of cadets are scheduled to graduate on July 16th. The unprecedented “School & Training Academy” will resume enrollments this fall after the SCORE BAJA 1000 has concluded.

ABOUT BAJA RALLY
BAJA RALLY is the first and only roadbook navigation rally-raid for motorcycles and UTV’s in the Mexican State of BAJA CA. In its fifth year of operations, BAJA RALLY is an eco-adventure competition where motorsports athletes use their intelligence and experience to navigate themselves and their equipment into unknown stage routes that are relatively less impactful on the environment than traditional motorsports events. The 5 day BAJA RALLY begins and ends at the host site of Nico Saad’s San Nicolas Hotel and Casino, the “Home of the BAJA RALLY”. For more information, visit www.bajarallymoto.com

ABOUT BAJA RALLY SCHOOL
BAJA RALLY SCHOOL is most intensive navigation-based rally training academy and curriculum available to the general public in the Western Hemisphere. The entry level 3-day course “INTRODUCTION TO RALLY RAID”, includes daily classroom sessions, practice drills, starter stages and a “final exam” stage on Sunday with a reception for graduates as they arrive to the final destination. During the 3 day course, trainees will learn the technical aspects of reading road books and navigating our hand-built training stages while also being introduced to “strategy & theories” using case studies. Successful graduates will automatically qualify for BAJA RALLY & Coast to Coast events and also be prepared for other professional rally events.