People remember Dave Shoppe as the champion Class 8 driver sporting his yellow and white General Tire Ford F150 race truck who duked it out in Baja with the legends such as Walker Evans, Rod Hall, and Frank Vessels. What they don’t remember is the 1991 F150 that he never raced; that’s because we remember Frank “Scoop” Vessels and Robby Gordon driving it. We recognize it as “Roseanne” that used to champion the legendary Valvoline livery. After selling the freshly built Class 8 in 1991, he left offroad completely and didn’t look back. Thirty years later, he would have the opportunity to buy the truck and be reunited with it. When I found out, I asked Dave if I could come to check out the truck for myself and write this story. But this story isn’t just about just Roseanne; it is a story of how Dave is being not only reunited with a truck he never had a chance to race but being reunited with the offroad community.

When I arrived at Dave’s family auto salvage yard in Hemet, I was greeted with nothing but smiles and began to learn the history of the truck. Old race signs hung on the walls that reminisce of the early days of racing in Baja. It felt like the truck was home in the shop. 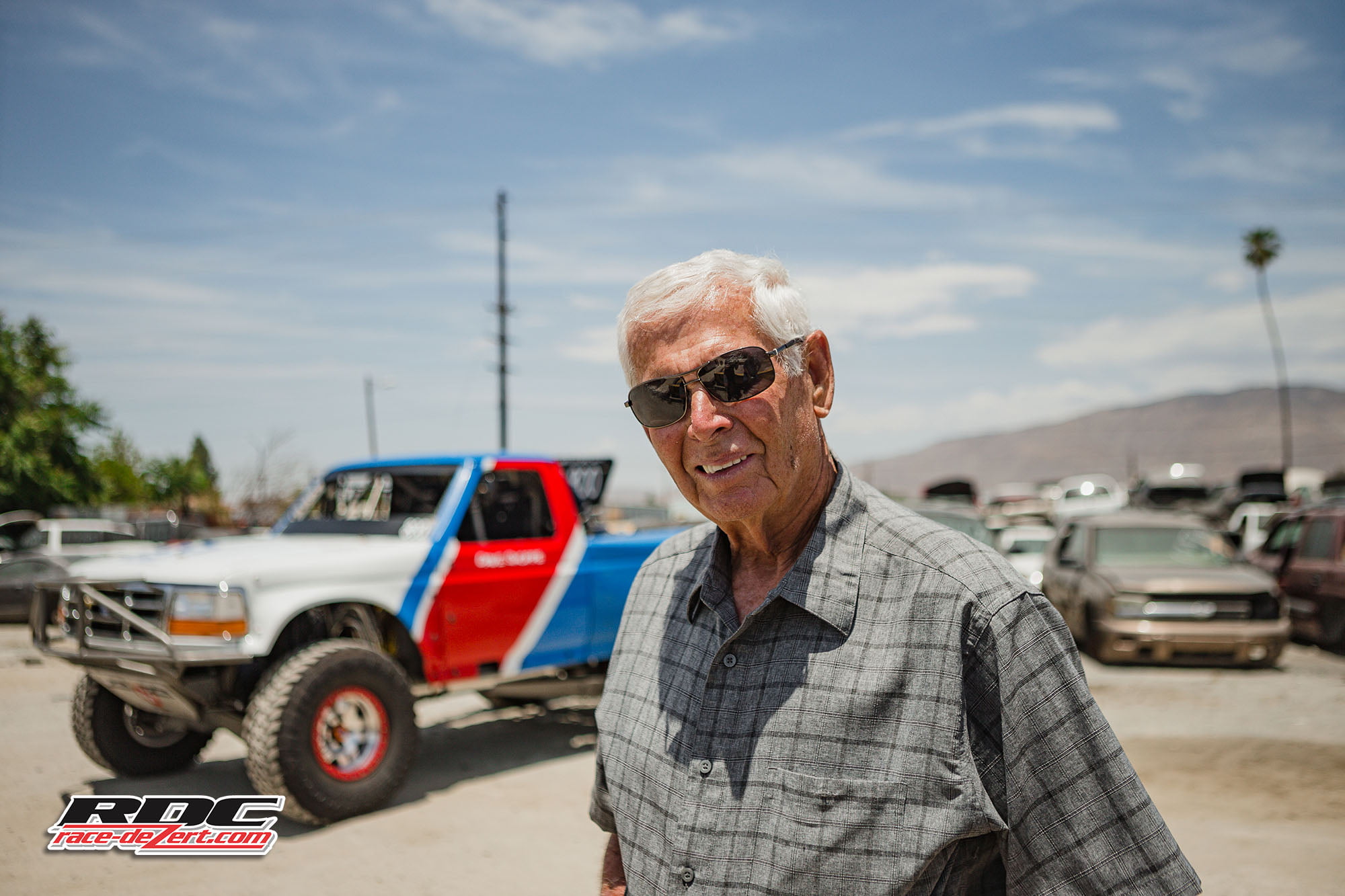 Before there were Trophy Trucks, there was Class 8, known as the grandfather of trophy trucks or the golden era of offroad racing. You had racing legends, Walker Evans, Rod Hall, Larry Maddox, Frank Vessels, Jack Johnson, Robby Gordon, Ivan Stewart, just to name a few. One of those legends who raced class 8 was Dave Shoppe, a factory Ford driver that dominated in the 80s. You may remember his General Tire yellow F150 or his red, white, and blue Goodyear truck that he raced. At the time Dave Shoppe had won several Class 8 championships and had one of the most successful programs and continued to battle it out with the greats. 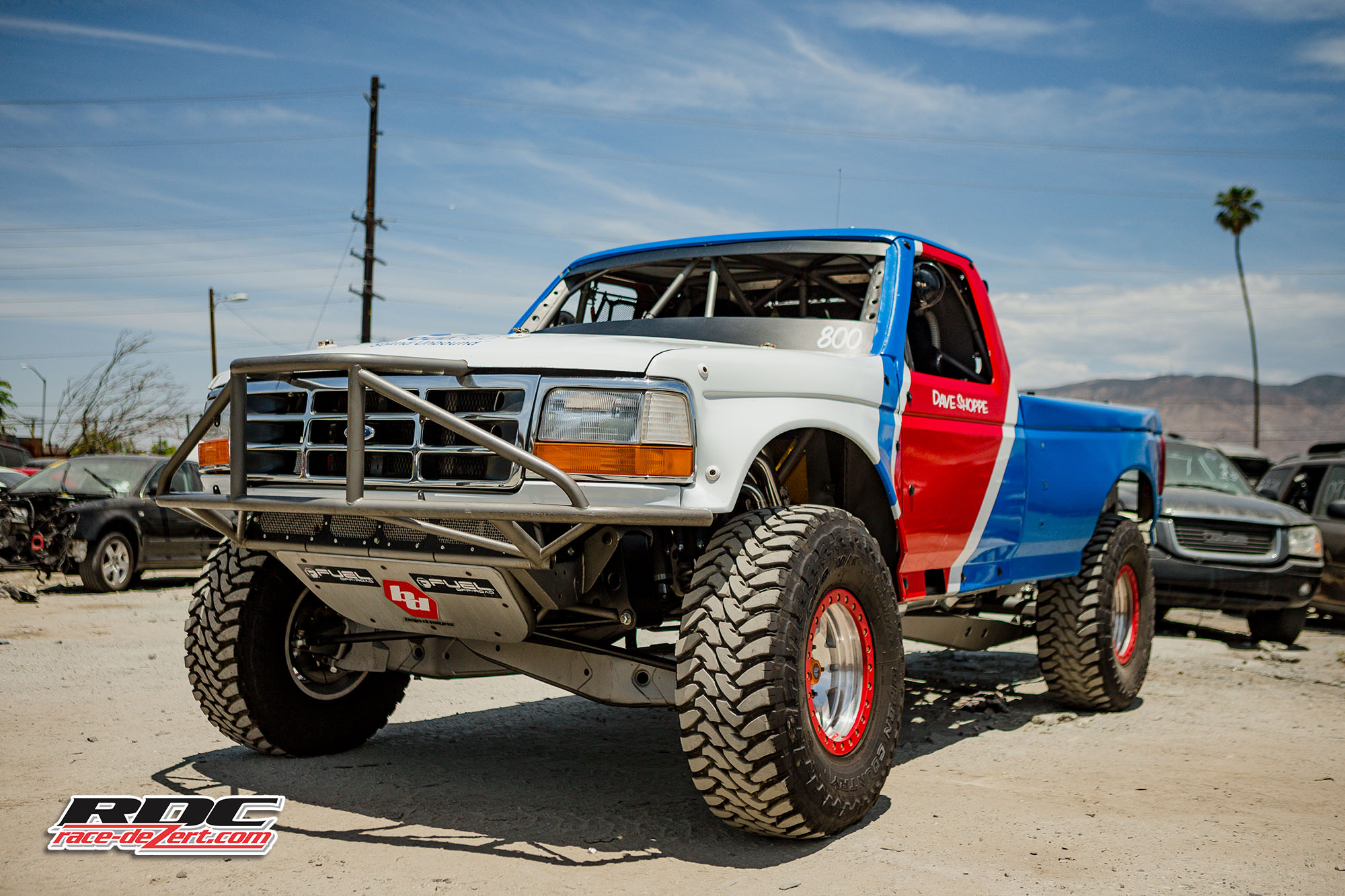 But there was one famous truck that you might not know was his to begin with, and that is the 1991 F150, affectionately known as “Roseanne.” It is the truck that sported the famous Valvoline livery piloted by Robby Gordon throughout the early 90s. 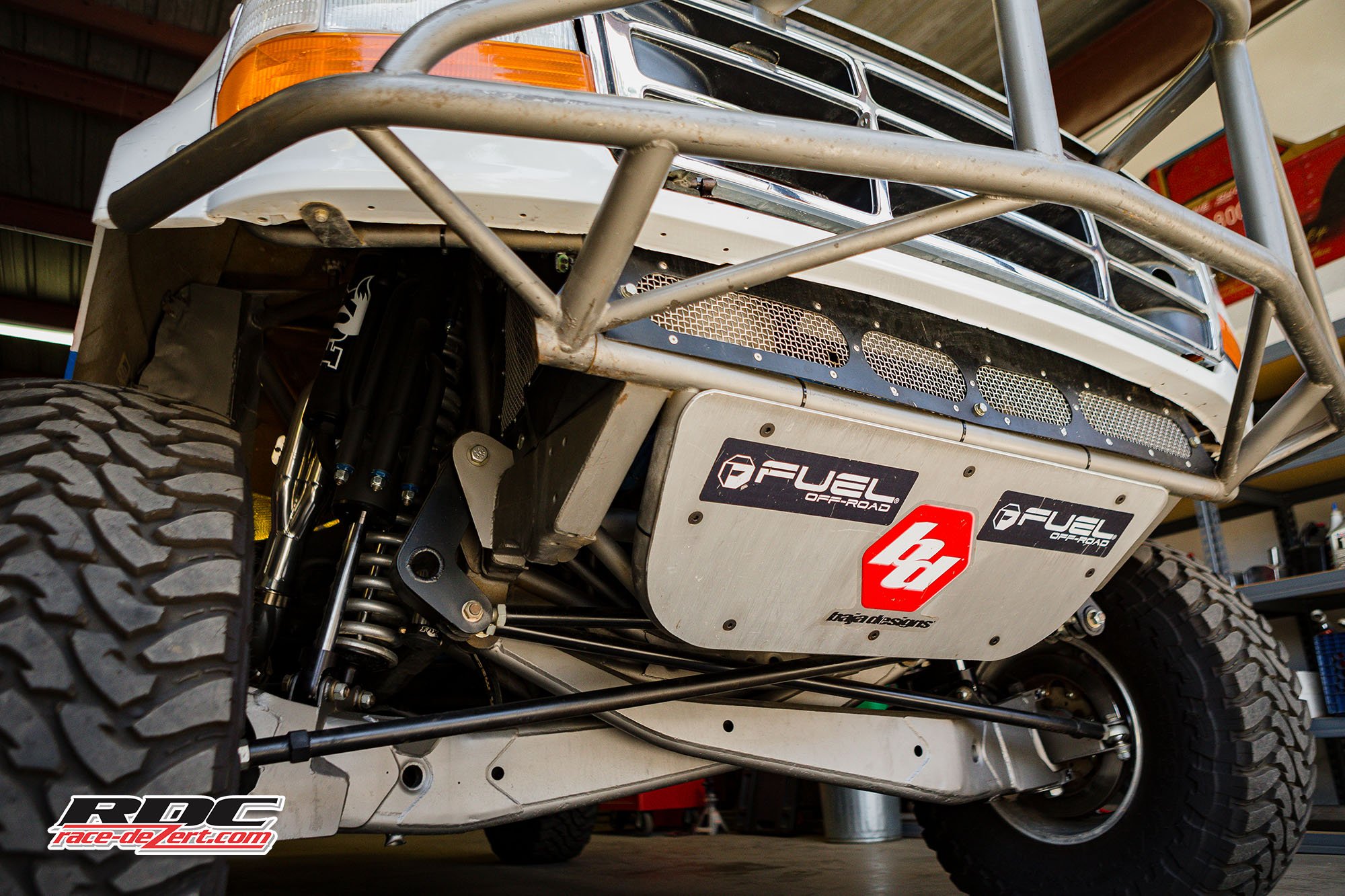 In 1991, Ford and General Tire backed out of racing entirely due to the economic recession just as Kevin Bunderson was finishing up his new truck. Knowing he couldn’t compete against the other racing giants on a shoestring budget, he took that as a sign it was time to step away and let someone else pilot it.

Dave’s long-time friend Frank “Scoop” Vessels came to him and proposed to drive the truck, and Dave would continue to own it. And shortly after the 500 he knew he couldn’t compete with those other teams with bigger budgets and decided to leave it all behind and step away from offroad racing. 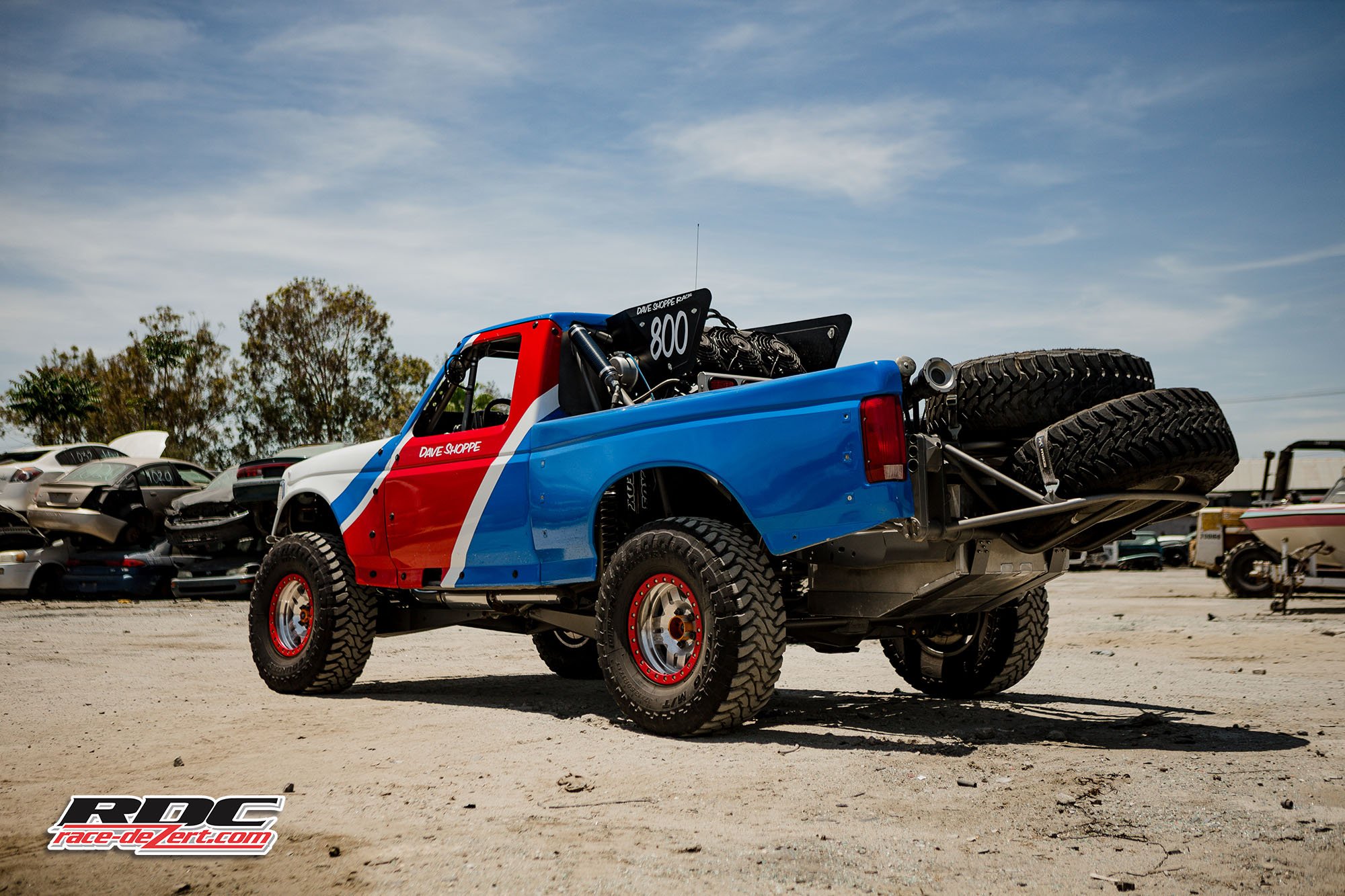 Dave knew he couldn’t keep the truck and let it sit, he thought the truck deserved to be raced so he sold it to Frank in 1992. Therefore afterward, Dave stepped away from offroad completely and traveled around the world. This truck was his Monalisa; at the time, it was the most advanced class 8 truck out there and helped push the sport further. He knew the truck would be in good hands. 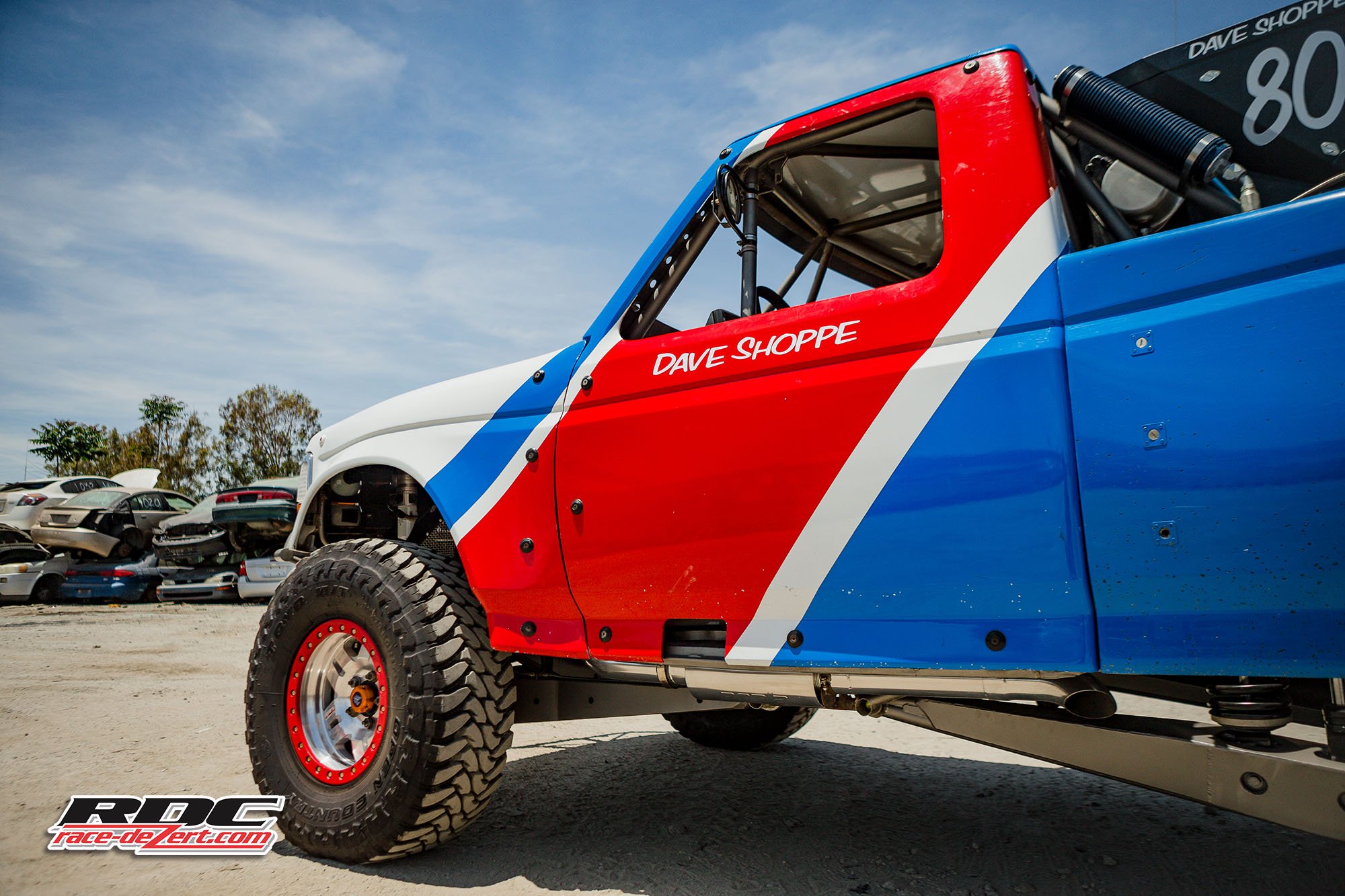 When I asked Dave what it was like to drive the truck, and he responded, “I never did, Scoop drove it, and I rode in it twice,” Dave said. “I knew that if I drove it, I would never sell it. It was too good.” He then proceeded to tell me that he sat in it the night before, and all the memories just started coming back and started telling me all the incredible stories of him racing with Rod Hall and Larry Minor in the early 70s. He even gave me racing advice “To win, you gotta finish,” he said. 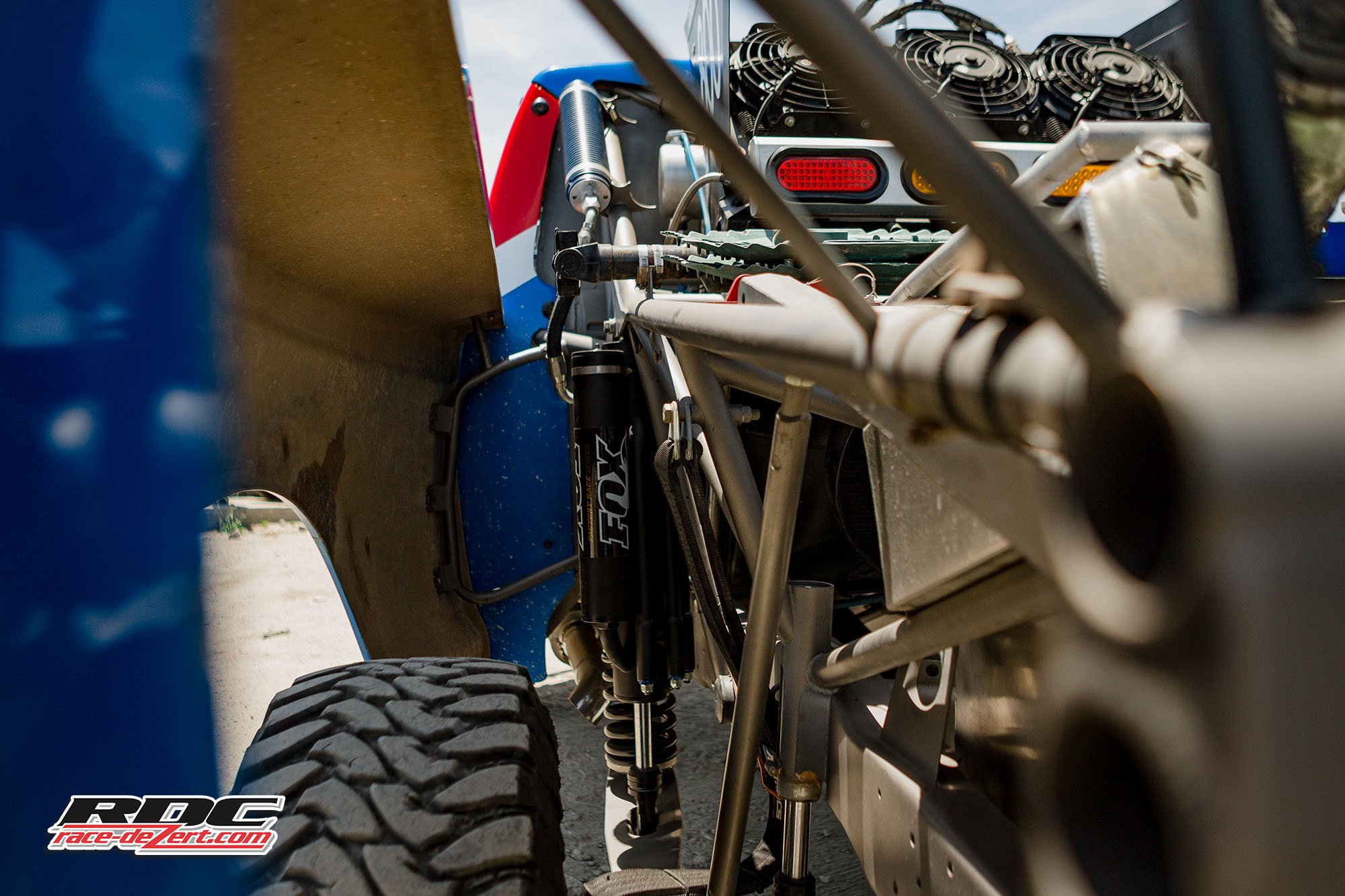 Frank ran the truck for a few years, and by 1993 Robby Gordon had bought the truck from him forming a team. Robby removed the quarter ellipticals, cab, and added coil-overs to race in the elite Trophy Truck class at its inaugural season in 1994.

The truck was continued to race throughout the years as it had changed hands a few times. Mike Coleman brought it back to life and fully restored it in 2015 after purchasing it from Jason Yoeman’s family. Mike saw it had been sitting for years and completely tore it down to the bare frame and had it sandblasted, rebuilt the engine, and rebuilt everything on the truck. There was not one part of the truck that wasn’t weathered and full of patina. The truck now sits on 37″ Toyo Tires, Fuel wheels, with Fox shocks all around to help it get through the desert. It has a 550hp big block Ford V8 that is tuned to run on Mexican pump gas. It still retains the original Class 8 tube chassis built on a F150 frame.

Mike gave Roseanne a second chance at life and raced it in NORRA and continued to enjoy it until this year. Dave saw the Race-Dezert classified ad for the truck and decided to take the plunge. 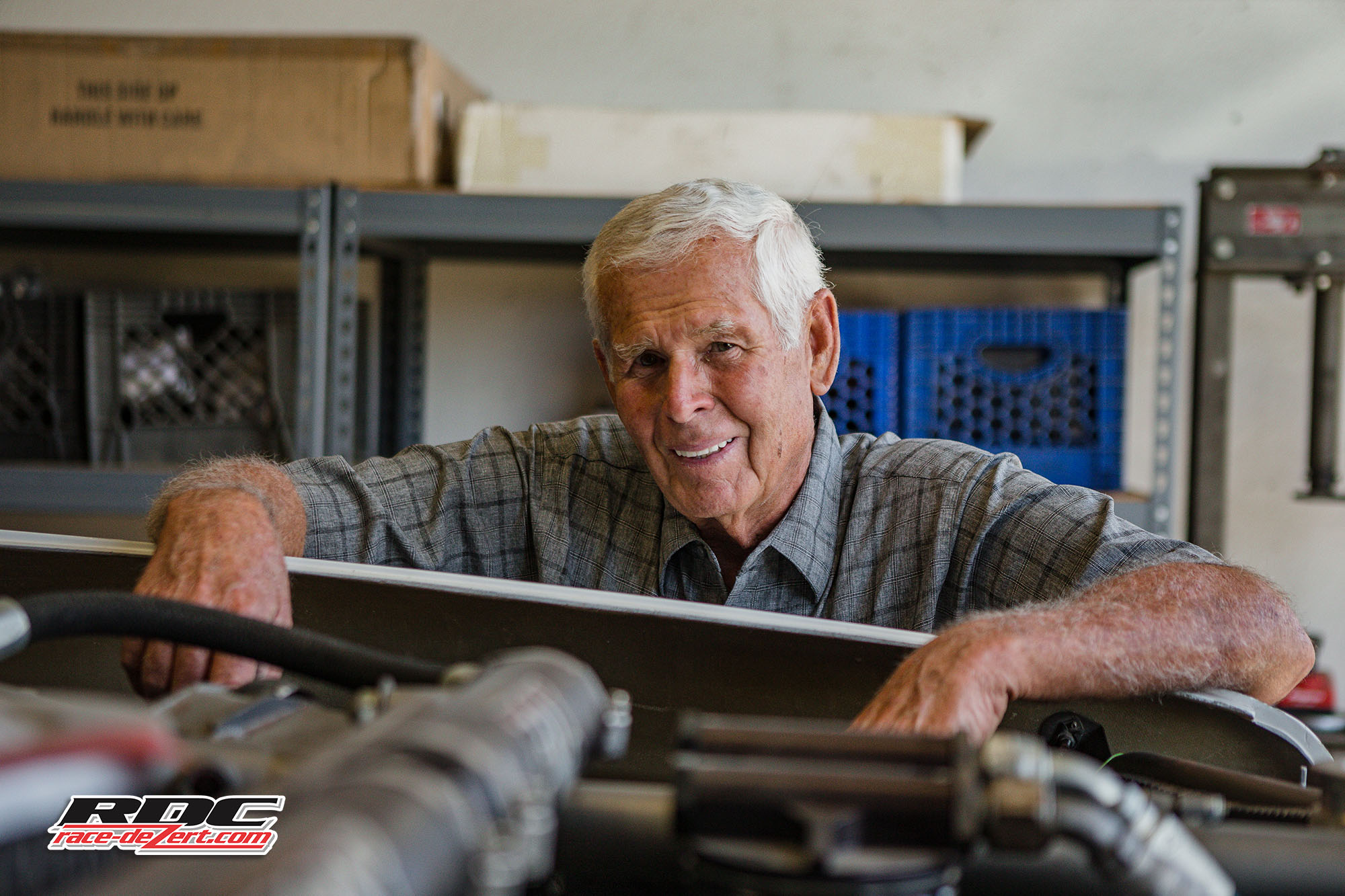 “I am just happy it is back,” he said as he leans over the engine in awe of it. As the truck was delivered just a day before I showed up at the shop, so he was still a bit blown away by it all.

While I was there, Dave’s former co-driver and long-time friend Larry Maddox showed up to the shop in their perunner Chevy that they used in Mexico for years. Yes, it is indeed a Chevy C10 converted to look like an F150; when Dave became factory Ford, they converted it to I-Beam suspension and put on Ford body panels. Look at the cab, it is a C10. I was surprised as you are right now reading this; it even has a Ford steering wheel. This 500 hp monster deserves its own feature, as I could write another 700 words on it. Larry recently purchased it back from the original builder just a few months ago.

After Dave quit racing, Larry went on to own what is often credited to as the first Trophy Truck in 1991: the famous A-arm Jeep Grand Cherokee ZJ designed and built by Russ Wernimont. It was piloted by Jack Johnson and later raced by Curt LeDuc. Larry continues to build award-winning hot rods today. 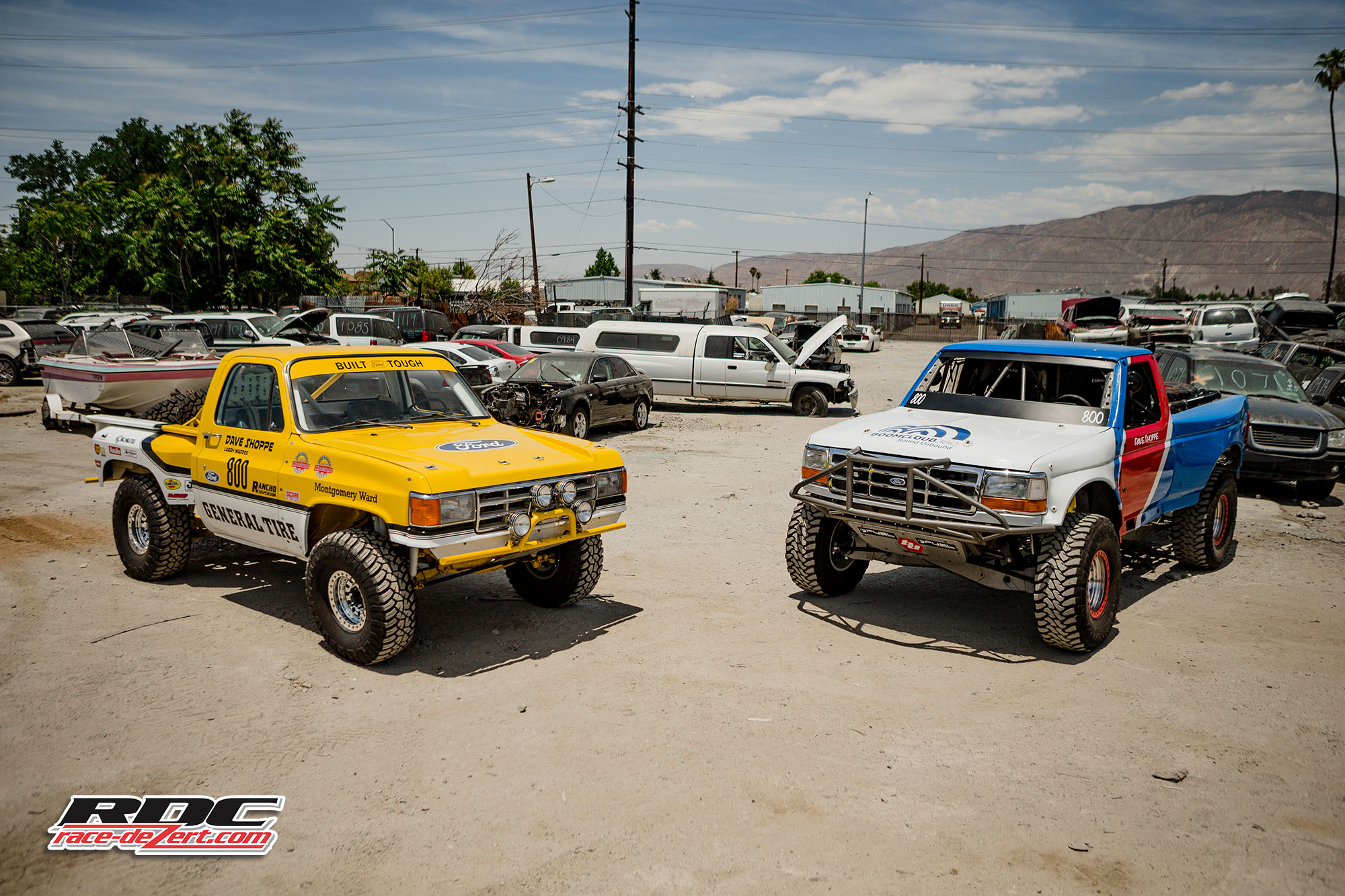 As they parked their trucks next to each other, you can see the smiles on their faces glow, reminiscing of the many stories they had racing together throughout the years. You could tell that this was a reunion, I had no idea Larry was going to come, and I am not the slightest bit upset at it. Seeing the two legends together share stories about racing in Baja and getting stuck in the Matomi Wash or how they had rolled the truck and still finished second was priceless.

The days of Class 8 are long gone, and Roseanne has helped pave the way for Trophy Trucks. It has come back home to its original owner and has a second chance at life, and this is why Dave let it go in the first place. He thought it deserved to be raced and given an opportunity to be successful in the desert not just sit in a shop. John, his son, will continue the racing legacy and race the truck in the coming year in Best in the Desert or SNORE with hopes to eventually race it in NORRA. The truck has had a fresh prep from Vildosola Racing; they will add a few touches here and there to make it their own, maybe even change up the livery. Whatever they do with it, it will be incredible at the hands of racing legend Dave Shoppe himself. We are happy Dave is back in the offroad community.

Great article! I got goosebumps just reading it. I wasn't around to watch the racing but man I wish I had been!

Awesome write up . For sure these two legends will forever be burned in my memories.

Thanks to @Mark Newhan for getting us in contact with Dave and suggesting this feature!
dezertpeople.com
offroadaction.ca

michael.gonzalez said:
Great article! I got goosebumps just reading it. I wasn't around to watch the racing but man I wish I had been!

I appreciate the kind words, I spent hours talking to him. I wasn't even alive when he was racing so hearing the incredible stories from Dave was an absolute honor, I wish I had seen him race. I ended up spending 4 hours at their shop talking to him.

Great writeup...Class 8 was da bomb back in the day.
Keep these stories coming.
Thanks Jason.
"If you are going through hell, just keep going"
Winston Churchill
S

Curtis Guise said:
Thanks to @Mark Newhan for getting us in contact with Dave and suggesting this feature!
Click to expand...

I just talked to Dave and here is what he said about the article.


"When you have to let something go that is a huge part of your life it’s hard to even talk about. I haven’t smiled like this since I could remember Thank You Jason"

Best RDC feature for quite some time... So cool!

Heard many stories about Dave from one of my captains, Dave worked for the same fire department I did as well as owning the junkyard all the old CDF guys went to around Hemet/San Jac. I only saw Dave at races when he flew by!

I think my first race was the Gold Coast 300 with Mike Coleman in about 1987. I was fortunate enough to see Dave race, along with Scoop, Manny, Rod, Walker , Mears, and SO many other legends "back in the day". We were hooked on off-road racing with goose-bumps from that very first red truck going by (Larry Minor maybe?). Mike built his first truck from a 3/4 ton Chevy long-bed and we (he) won the stone-stock full-size championship in La Rana in 1990-91. I am very happy to see this truck go back to Dave and I hope he fully wraps her back to the true 99 Valvoline stickers. I tried to talk Mike into it, ha ha. Great article, I'd like to see more of these! By the way, Rosanne's original "rear-end" with tube supports and trusses now sits under a linked square body 74 Chevy C10 named "Red Dog", with an LSx. I hope Tony V gets my dad's early love back in the baja dezert soon!!
Still angry after all these years! jay you need to do a story about Kevin Bunderson ! He has been at the top level of this sport since the early 80s . So many awesome innovative builds and a treasure trove of off-road history .
S

Is this the truck he built to replace the 1988 SCORE class 8 championship winning truck that he sold to the Mc Millin family in '89? If I recall correctly, he raced a portion of the next season in this newly built state of the art class 8 that had some design issues that sidelined him for the latter part of the season. I also thought that truck had an inverted 1/2 elliptic spring layout in the rear.

Would love to see more of these. The sports elder statesmen aren’t getting any younger. Now is the time to capture their stories etc.
TaxPayer Funded Racing
http://www.facebook.com/username#!/TPFRacing

Shoppe and Bunderson for off-road hall of fame 2021 !

So cool. I grew up watching Dave on ESPN. Miss seeing him in the sport and its great that he's back!
Maximum Attack.

what is the name of his wrecking yard in Hemet ?
L