BIG OLY History:  The Big Oly Bronco is arguably the most popular Bronco in the world, and I’d bet $1.87 Million on it.  Parnelli Jones had been racing under the Bill Stroppe banner for a few years in some production Broncos but those were mostly stock with reinforced suspension and beefed up motors.  Jones was a thoroughbred and he wanted his race vehicle to be the same.  Jones first went to Stroppe about an idea he had for a full tilt race Bronco but Stroppe wasn’t interested.  Jones, not going to take no for an answer went to Dick Russell, one of Stroppes’ lead fabricators and talked him into secretly building him a full tilt race Bronco.  Once Stroppe got wind of their little plan he was furious, but then started looking at the half built racer and warmed up to the idea.  The Bronco was moved from Russell’s garage to Stroppes race shop and was completed in time for the 1970 Mexican 1000. 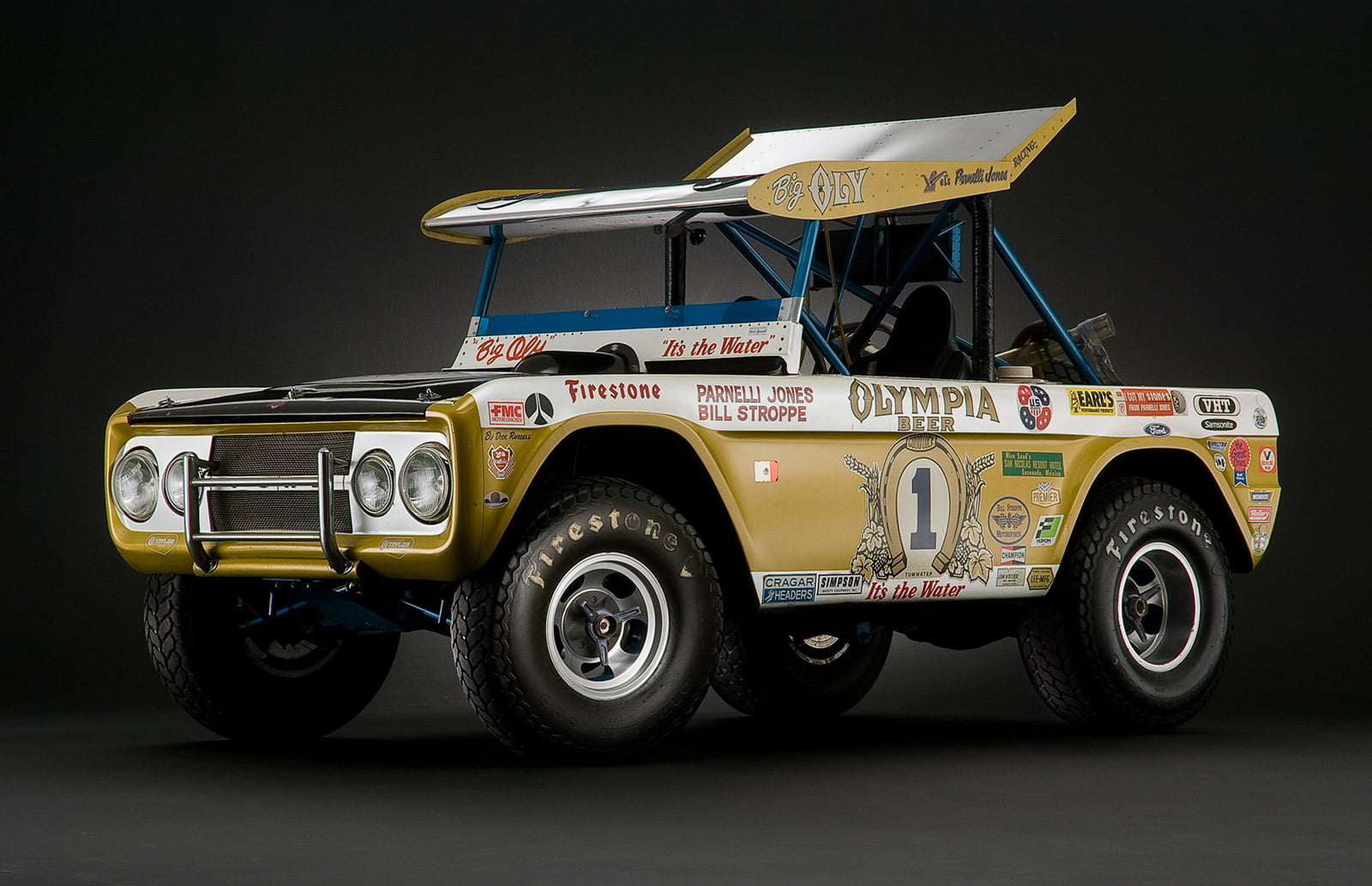 Big Oly actually started out as the “Crazy Colt” until Olympia Beer signed a sponsorship deal for $5,000 to be the main sponsor before the 1971 Mexican 1000 and forever changing the name to the “Big Oly Bronco”.  Jones and Stroppe would win the Mexican 1000 that year Overall, even beating the bikes, an impressive feat indeed.  That little Bronco would start making a name for itself chalking up major wins in the desert over the next couple years. What made the Bronco so special is that the chassis was built from custom formed tubing, not from a standard truck chassis.  A fiberglass body with aluminum finished off the body to make it look like a Bronco but really it was a formula 1 racer for the desert, some could argue this was the first “TT” ever built.  The one thing that really made this Bronco cool was the wing.  The wing had pop up lights located in the front that would stay protected during the day and then flipped up with a lever from inside the cab at night.  Also adjustable from inside the cab was the rear portion of the wing that could be stood up at a 45 degree angle to help with downforce when the little Bronco got squirrely on those fast fire line roads.

Big Oly proved itself on the rougher courses like the MINT 400 in Las Vegas when it beat Bobby Ferro in his very competitive Funco SS1buggy.  The buggies had an advantage in the rougher race courses as they were lighter, but Jones and Stroppe put a kibosh to that thinking at the 1973 MINT 400…..in the snow.

By the time 1975 rolled around it was time for Big Oly to be replaced.  Jones and Russell had a plan for a new vehicle that would have a little longer wheelbase and more suspension travel, and it would also be from a different manufacturer.  Once the new Chevy Blazer debuted at the 1975 Laughlin 300, the Big Oly was retired and headed to the Jones’ museum in Torrance California.

The Plan:  Fast forward to 2021 as a few Bronco knuckleheads racing at the NORRA Mexican 1000 had a few too many shots of Tequila talking about possibly racing together at the upcoming Baja 1000 in November.  Chris Greenwood had just won the NORRA Mexican 1000 in his Bronco as his strongest competition, the Boyd Jaynes and Brian Godfrey Bronco suffered a very rare DNF.  A plan was hatched to team up together in Greenwoods Bronco for the Baja 1000, splitting the driving into 3 teams. In continuation of Method’s Heritage Series, the team has dressed the Bronco appropriately.

The BAJA 1000:  For those of you not in the know, the NORRA Mexican 1000 is run as a rally style race over the course of 5 days.  The race course runs on most of the original Baja 1000 race course but since there are a bunch of vintage style vehicles entered, they tend to stay away from the really bad sections.  The Baja 1000 on the other hand is run straight through, no stopping until you get to the finish line, this time 1227 miles of the best….or worst Baja has to offer.  Racing a modified early Bronco at the Baja 1000 will be no easy feat, those smiles at the start of the race will turn upside down at some point and all the drivers will go through a long list of emotions before getting to the finish in La Paz….if they can make it that far.

The Drivers: Chris Greenwood is somewhat new to desert racing.  He built a Bronco and raced it for the first time at the 2019 NORRA Mexican 1000 but raced motocross as a kid.  His family was heavy into the racing scene from the 50’s to the 80’s.  Building the Bronco was kind of a “Bucket list” type deal at first but of course then it grabs a hold of you.  He has already racked up wins at the 2020 Vegas to Reno, Silver State 300 and most recently the 2021 NORRA Mexican 1000.

Boyd Jaynes is a highly accomplished photographer with a fascination for off road racing.  You have most likely seen his work as his images have graced the pages of Racer, Dirtsports and countless ads for Fortune 500 companies. In 2010 Boyd set out and bought an old Bronco to race at the NORRA event.  With his busy schedule it only made sense to partner up with a friend who knew something about desert racing and that friend turned out to be Brian Godfrey.

Brian Godfrey is a 2nd generation desert racer who also works with Boyd at Custom Wheel house.  Like Jaynes, they are both a little too busy with work to be playing in the desert all year but they make time once a year and tackle the NORRA 1000 as a team.  And what a team they have turned out to be, with 8 wins in their class, 4 of them earned them the coveted “Overall Era” trophy along with their class win, they have become the team to beat in the Vintage Bronco class.

The Team:  The one thing these guys have going for them is that they have a great supporting cast of characters following them down the Peninsula and they ALL have a Bronco problem.  The Bronco community has come together to help their brothers out.  Andrew Norton, owner of Baja Broncos Unlimited, is probably one of the most knowledgeable Early Bronco guys out there as he is responsible for restoring these works of art.  His partner in crime, Todd Zuercher, just as Bronco savvy, has written a book on Broncos and could identify pretty much every part on those machines.  Also on the team is the winningest Bronco team in class 3 history, the Moss brothers.  The Moss brothers have won their class at the Baja 1000 15 times and decided to help their buddies out this year instead of competing.

You have to love these guys for taking on the Baja 1000 in this old Bronco, and who doesn’t like the Big Oly Bronco?  No pressure guys, you’re just throwing on the most iconic livery in Bronco history, along with one of the most iconic drivers in motorsports with Parnelli Jones.  I mean, what could go wrong?!?!  You’ve already started out on the wrong foot with me because you didn’t put a wing on the Bronco but what do you care!  I know, I know, you ran outta time but I would have had a wing made before I started prepping that thing!  *Smiley face*

In all seriousness, good luck out there guys, I’ve always got love in my heart for the vintage guys taking on a very serious challenge.  Try to keep those tires on the ground and keep the rocks off the roof.

This is so so so good. Incredible writing Rory and excellent execution on this project.
H

Just saw the REAL Oly "Bronco" up close at the Petersen Car Museum yesterday... Waaay ahead of its time!

ahead of its time& FaSt!, 14 hour peninsula run??, jeeezzz, thats Much faster than Rob Mac& Luke Mc 's time.
I