Bringing an old truck back from the dead, and turning it into a fully functioning work of art that exceeds every expectation is a fantasy of many, but reality for few. While the off-road community expands further and further into new platforms, opening new doors to prerunner and race truck builds we’ve never seen before, one racing family found the potential for their newest fully built prerunner disguised as a rusty old Ford F100. Mike and Kyle Craft represent two generations of off-road racing heritage here in Southern California. Mike’s deep roots in off-roading, Jeeping, and racing led way to his son’s career as a successful 6100 class driver. Having raced with BJ Baldwin and now teamed up with famed Class 1 driver James Dean for the 2020 race season in their new Brenthel Gen 3 6100 truck, Kyle Craft definitely knows his way around the cockpit of a race truck. It was no surprise that when he and his father bought this 1978 Ford F-250 Ranger, the gears in both their heads began turning. But destined to become a race truck, this old Ford was not. Instead, Mike and Kyle seeked to build a classic prerunner that would actually prerun their upcoming races. The extended cab long bed Ford served as a blank canvas, allowing them to design this build with both function and form at top of mind. But as a full-time working and racing family, Mike and Kyle placed their trust in a full time fabricator’s hands to make their dream a reality. 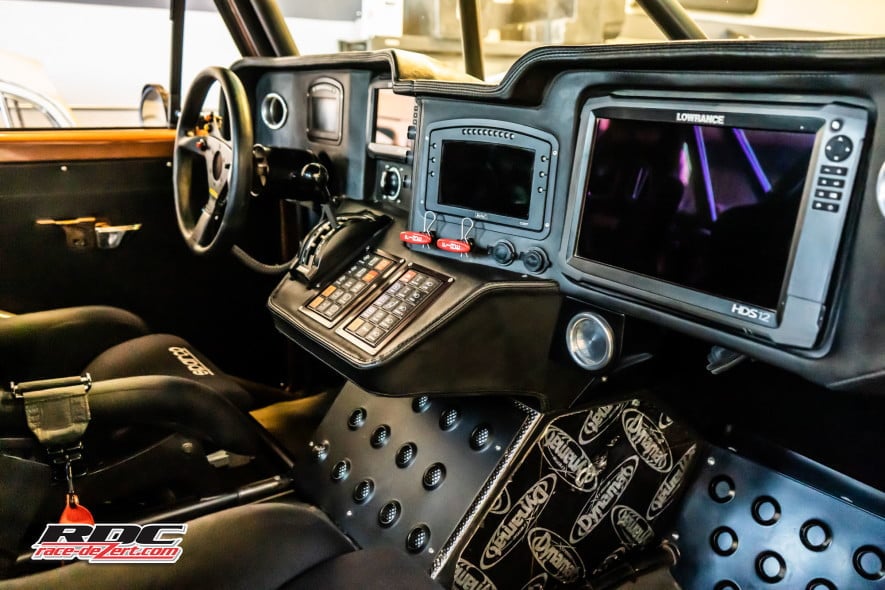 Chris Allen, owner and operator of Allen Motorsports has been fabricating and prepping race trucks for longer than he cares to remember. From simple suspension components to ground-up builds, Chris and his team do it all from their shop in San Juan Capistrano, CA. At the time Mike and Kyle purchased the old Ford, Allen Motorsports already played a key role in the Craft family’s racing career. Chris and his team took care of their 6100 prep needs, so naturally, they would place him in charge of the dentside prerunner build.

When the build began taking shape, the plan was to replicate a 6100 truck in the form of a 1978 F100 extended cab short bed. An LS3, Turbo 400 transmission and 37-inch tires were the basics, but that original idea didn’t last very long. Proposals of making more power were discussed, which lead to the final decision of a big block. “That one change in the plan ended up changing the entire build”, explained Chris. Setting forth under a new heading, Chris and his team at Allen Motorsports took the build head-on. The bump from an LS3 to an 800 wheel horsepower Dougan’s Racing Engines 555 big block running on pump gas meant most other components of the build would need to be upgraded to a Trophy Truck equivalent. With the tear down finished, Chris began with the cage work. From the rear firewall forward, all the fabrication was designed by hand. Chris utilized CAD software to design the backhalf, purely for benefit of neatly packaging all the components he knew he had to fit.

Once the tubing and frame plating was finished, Chris set his sights on the suspension. Chris installed a set of Blitzkrieg Motorsports trailing arms, with custom built upper links, onto the rear housing. The front suspension is a modified set of Blitzkrieg I-beams and radius arms, welded together as a “j-arm”. The Craft F100 sports a hefty shock package, with 14-inch 3.0 King coilovers and 16-inch 4.0 bypasses up front. The rear shock package consists of 16-inch 3.0 King coilovers and 18-inch 4.0 bypasses. Moving on to the drivetrain components, Mike and Kyle opted for a 4L80E transmission with a Reid case, built by Rancho Drivetrain Engineering, for better highway drivability. RDE also supplied the 10-inch ring gear center section of the rear axle. A Tubeworks underdrive system was also installed. Power is transferred to the wheels via big 36-spline axle shafts, with 3.25 rear hubs. Chris and the team also installed a full Brembo brake package consisted with Trophy Truck setups.

Once the old Ford was rolling, with the engine and drivetrain components in place, the real work began of packaging all the necessary race-spec components into a truck without making it look like a race truck. Beginning with the rear, Chris took on the task of keeping everything as close to the bed line as possible. This includes a 95-gallon Harmon fuel cell, full size spare, dry break fueling system with auxiliary fill, a large tool box, air jack, a spare driveshaft, Safecraft fire suppression system, fire extinguishers, and all the paneling for a clean look.

Moving up to the front, Chris installed a Power Steering Solutions ram-assist, with a trophy truck power steering pump, on a custom swing steering system. Brian from Allen Motorsports designed a beautiful 180-degree header exhaust system, with a copper coating for proper heat insulation (and it matches the truck’s paint). The rest of the exhaust has four mufflers in total, for a quiet ride while prerunning the race course.

Even with the extensive modifications made to the front of the truck, Chris was able to retain the entire frame on the front half, including the frame horns and even the factory chrome front bumper. This aided in keeping the truck looking like a classic Ford. They opted for a pair of KC HiLites 7-inch round headlights, with Baja Designs LED lights in the grill. Directly behind the grill is an apparatus of CBR coolers, responsible for keeping all the fluids of the truck at optimal temperature. Chris and his team were able to package all the oil coolers, transmission cooler, radiator and air conditioning condenser behind the factory grill. The interior is perhaps the only part of the Craft F100 that isn’t complete. While it is completely functional as it sits, the plan is to finish the interior with a King Ranch theme, playing into the Ford heritage of the truck. Currently, it has a two-piece custom built dashboard, designed with Mike and Kyle’s ergonomic needs in mind. Every component on the dashboard was placed in accordance to their preference. But even as a prerunner, this interior was built with some creature comforts in mind. In addition to the Vintage Air AC system, the three Sparco seats are installed on electric slides, and have seat heaters built into them.

Perhaps the most striking feature of the Craft F100 is its classic Ford brown and white paint scheme and overall body appearance. While the cab was mostly straight when they got the truck, some body work was needed to inhibit rust and straighten some panels. The McQueen fiberglass gives the truck a tough, race look and provides clearance for the 40-inch BF Goodrich KR3 tires. Mike and Kyle opted for a set of 17-inch Ultra Xtreme 103 beadlock wheels, in a machined aluminum finish.

It’s the small details that make this truck a luxury prerunner that keeps its old school roots. The chrome pieces, weatherstripping, and trim around the glass came straight from the LMC Truck catalog. Crank windows and manual door locks stayed in place, to keep it period correct. But the Craft F100 doesn’t lack in tech. With a Motec engine management system wired by James Lin Motorsports, every parameter of this truck’s performance is carefully accounted for. There’s even an MSAT system installed, consistent with modern Trophy Trucks. With the final details in place, Chris Allen’s work was (mostly) done, as the truck went out for a test and shock tuning before it’s debut as the family’s newest prerunner. While the truck will continue to be maintained at Allen Motorsports, Chris gave us some final thoughts on the build. “My favorite part of this truck was the fact that I was given the opportunity to build it. It’s not often that I get handed a project like this where I can express my creativity and influence on the plans while still staying within the confines of the customer’s needs”, Chris explained.

Since the build was finished, Kyle has preran the Parker 425 in the Craft F100, proving its abilities as a viable truck for even the harshest of environments, from the high deserts of Nevada to the coasts of Baja. With the current COVID-19 situation forcing the cancellation and postponement of off-road racing everywhere, it’s not clear when the next time the Craft F100 will report for duty as a trusted steed in the Craft Racing family’s stable, but one thing is certain. When that day comes, this truck will undoubtedly be ready for it.

Not enough... this truck is BAD ASS!

I heard that guy Mike Craft made his money as a dancer on broadway. That he and PAB worked together on Chicago.
Good Grief
N

Chaplain said:
Man those headers look like a spaghetti bowl. Love it, who did the exhaust work, looks amazing?
Click to expand...

Hummm, you know someone that might have worked on them?

nimrod said:
I heard that guy Mike Craft made his money as a dancer on broadway. That he and PAB worked together on Chicago.
Click to expand...

TaylorAnderson31 said:
Wait a minute? I thought he made his dough modeling unlit cigars? Now Im confused
Click to expand...

That‘s his side gig. the real money is in dancing.
Good Grief

nimrod said:
That‘s his side gig. the real money is in dancing.
Click to expand...