Monday, January 7th marked the beginning of the 2019 iteration of the world’s most infamous off-road race: the Dakar Rally. But the party really started the previous day at the beach…

“What can I say but ‘wow!’ Crossing the Dakar podium for the first time was an incredible experience. The energy from the fans was off the charts. This has been something I have dreamed of doing since I was a little kid, and it has become a reality.” – Garrett Poucher #71, Garrett Off-Road Racing, USA

Sunday is a time for family in Lima, which was evident as hordes of adults, children and the elderly alike packed themselves against barricades, outside the fences or lining the tall cliffs which overlook Dakar Village just to catch a glimpse of their favorite Motorsports heroes. The word floating around most of the day was “mayhem.” But as always, the ASO organization kept their cool and sent the 541 challengers (334 vehicles) up and over the bayside podium in swift fashion. Each met by excited cheers which would burst out as each team approached and exited the stage, warming the spotlight for the next.

“Up until this point the process has been pretty easy-going, but today going up and over the podium, the magnitude of this event really set in. The amount of people there to watch the ceremony was unreal, and we were packed right in there with them getting snagged for selfies left and right.”

Going up over the podium was brief but still a huge moment for me, putting that check mark next to my #1 dream and goal in life.” – Skyler Howes #73, Garrett Off-Road Racing, USA

The following day was an early one, as motorbikes departed Peru’s capitol at about half past 5a.m. local time for the event’s first Special Stage – enroute to the Pisco bivouac. What obstacles could riders and drivers face? Where will we find the 12 Americans (Ricky Brabec #15, Andrew Short #29, Garrett Poucher #71, Skyler Howes #73, Nathan Rafferty #104 on bikes; Robby Gordon and Kellon Walch #316, Cole Potts and Max Eddy #346, Blade Hildebrand and Bill Conger #367 in cars; and Casey Currie #343 in a Side-by-Side) in the starting order for Special Stage Two? Until the final competitor reaches the end of his or her road book today, we’re yet to know. Stay tuned… 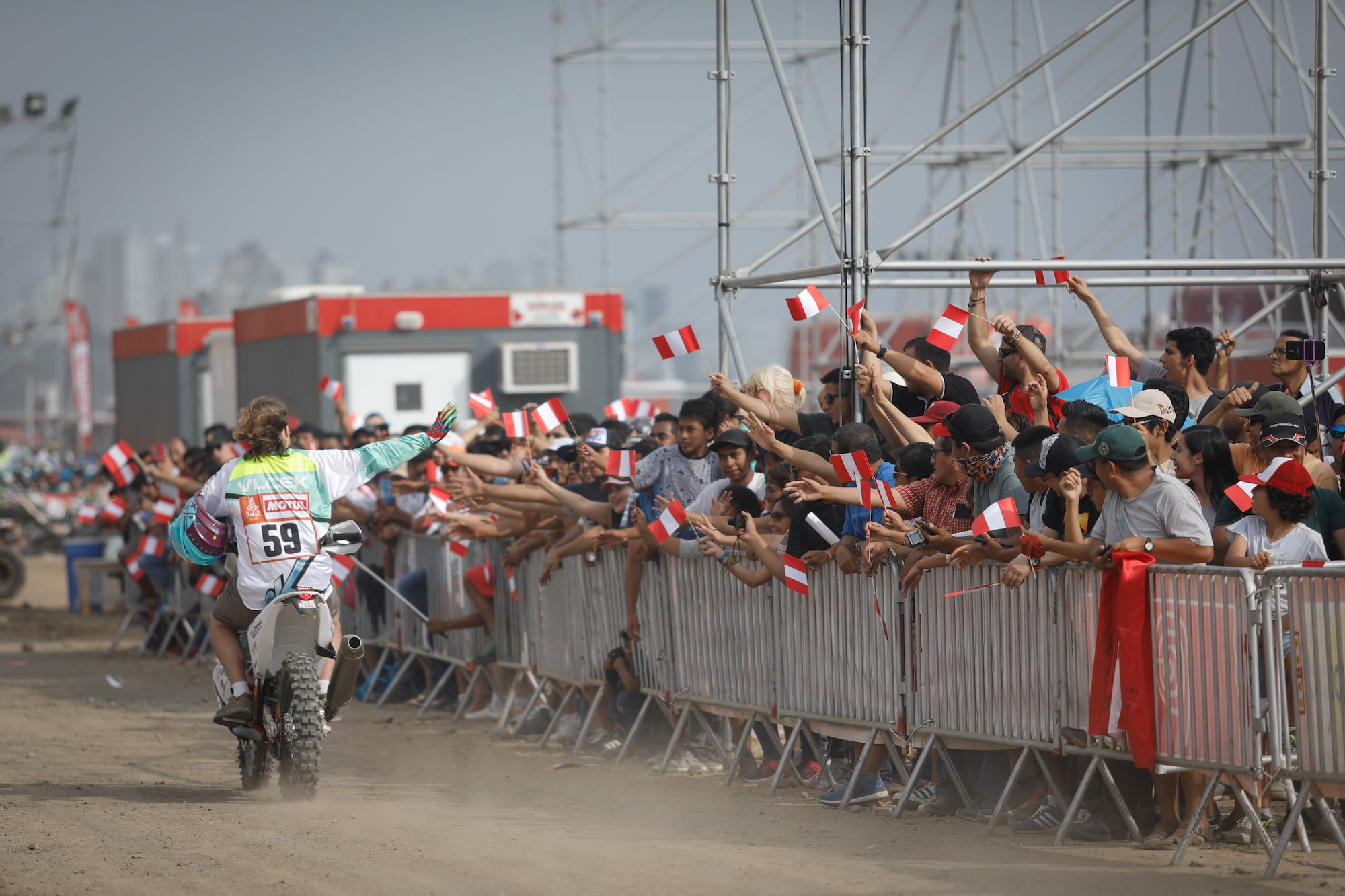 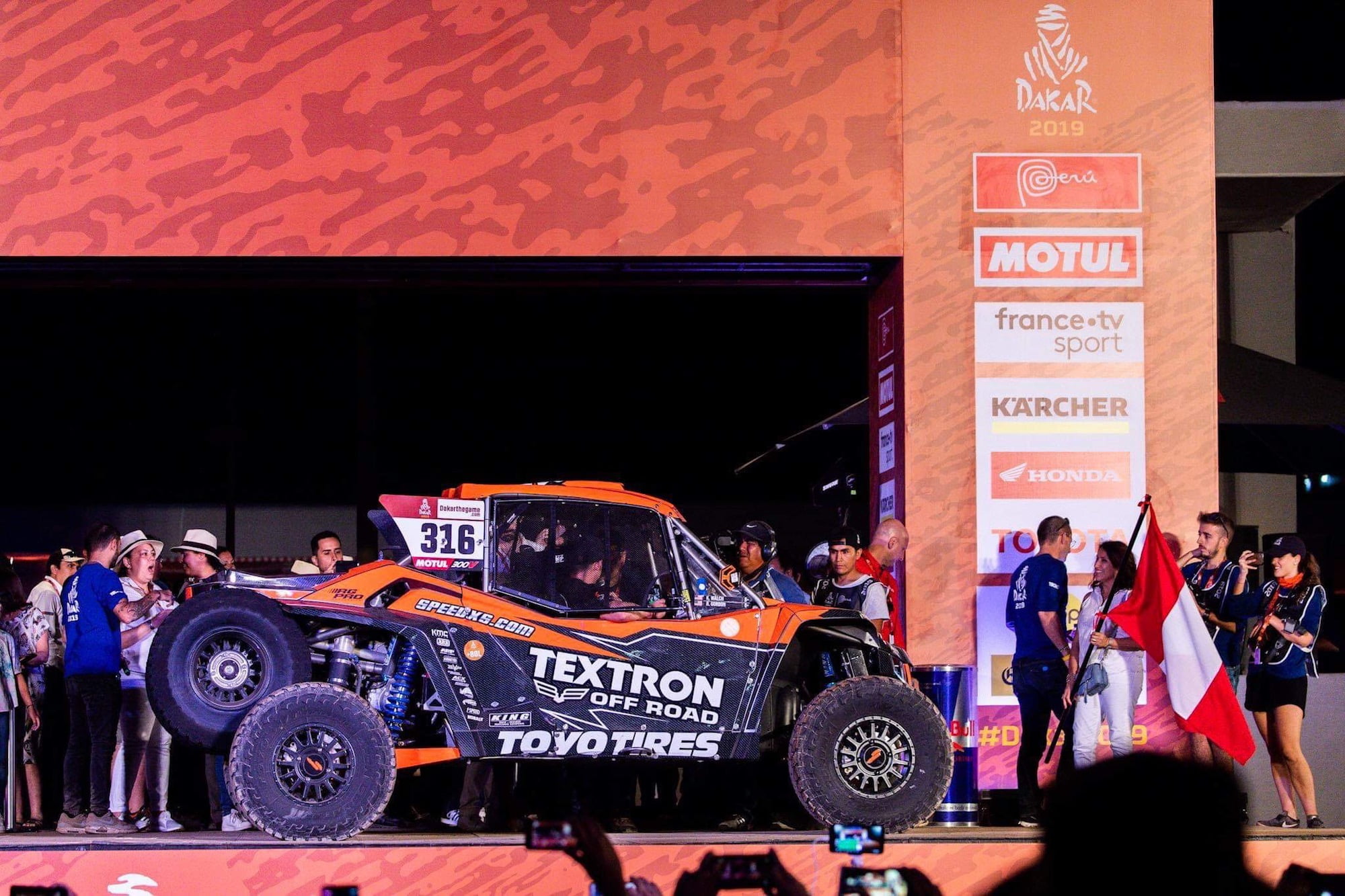 Ø 541 competitors and 334 vehicles —137 motorbikes, 26 quads, 130 cars (including 30 SxS) and 41 trucks— were cleared to start the 41st edition of the Dakar at the end of the technical and administrative scrutineering.

Ø This year the roster of women racers continues to grow, including the rally’s first-ever female Malle Moto contestant, Sara Garcia #98 of Spain.

Ø Before the start of the race, the drivers, riders and crews will get a big send-off from the fans during the podium ceremony in Lima. The celebration will take place on Magdalena beach, where over 100,000 visitors flocked to enjoy a wide range of activities in the Feria Dakar over the last three days.

Ø The first round comes with a sand-packed 84 km course in the Pisco region.