“Thank you very much for accepting your assignment, whatever that may be,” said Frank DeAngelo, the leader of the BFGoodrich Tires Pit Support team. The room of 50 chuckled and we got to business, this was already the second meeting of the Pit Bosses and Communications Team in preparation for the 50th Anniversary of the SCORE Baja 1000 presented by BFGoodrich Tires.

The first BFGoodrich Tires pit was unofficially official in 1979 when Frank DeAngelo and Don Minton decided to drive a BFGoodrich Semi Truck to La Paz to help support racers. There was still two sections of dirt road trying to get to La Paz, but that didn’t stop them. With 38 years of experience under their belt, both are still participating in the pit support program. Today, the numbers are incredible with 37% of the entire field of racers enlisting the help of BFGoodrich Tires:     (Numbers are unofficial and +/- a few) 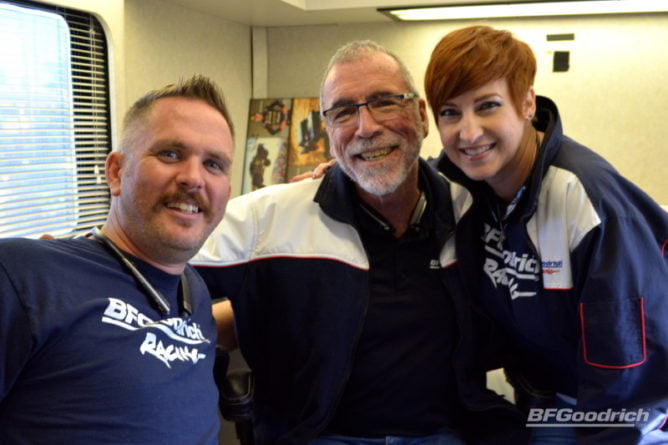 With anything of size, planning is an essential piece of being successful. There are many involved in the process but the Tripod Team of Frank DeAngelo, Nate Hunt and Jennifer Ignacio are the core. The planning started in March 2017. The Pit Bosses binder is 3” thick with spreadsheet after spreadsheet of explicit instructions. There are not just a few people involved; there are over 200, where 85% are volunteers. For these volunteers, this is their vacation. There are 8 pits in total for this year’s Peninsula run at an average of 16 people per pit. Ernie Pekarek in Pit 1 has been volunteering for 28 years, and there are many right alongside him on years. You don’t just become a volunteer; you are chosen to be a volunteer and it is a highly acclaimed opportunity. As they build the pits groups, they are filling their team strategically: each pit has a bilingual person, medic, cook, fabricators, mechanics, communications, fuelers, tire changers, and then some general lifters. Becoming a pit boss is a sincere and well-earned honor that is only available to seasoned and experienced professionals. There is a whole communications team of 24 who sit on mountaintops throughout the peninsula relaying messages to and from all the pit locations. Yes, there are certain locations you can drive to including the top of a volcano, but the real deal are the two teams that have mules to carry their gear and themselves to the top of their mountain! Yes, when you are communicating with BFGRELAY, there very well could be a pack mule nearby! <FULL STORY COMING> Wild Bill leads the communication team which includes satellite phones, race radios, and high-frequency antennas. 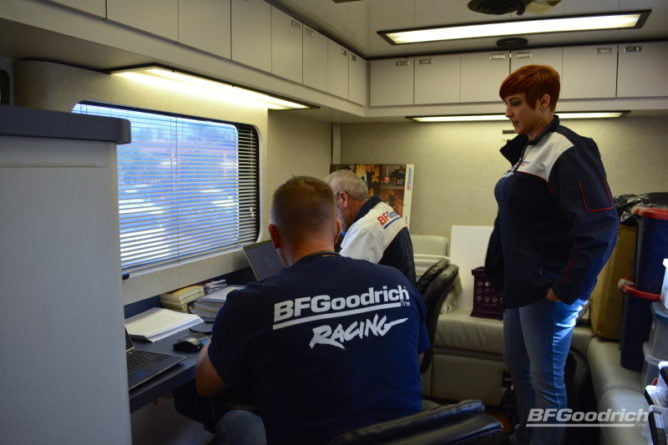 The next group includes the start and finish line, those on the move with the race providing support and the group back at Jackson Motorsports Group headquarters in South Carolina providing 24-hour race tracking updates. Together, the group sees the racers off the line, cheers them on throughout the race while checking in on the pits, and then celebrates with them at the finish line. All while being in constant communication with race standings.

Although not working with the pits, BFGoodrich Tires also hosts about 80 international guests and over 20 BFGoodrich Tires employees during the week giving them the opportunity to see the start, finish and be hosted at Pit 1 or Pit 8 to see the action. In total, the core Jackson Motorsports Group team is managing activities, hotels, and transportation for about 300 people!

We kicked off today Saturday, November 11 at 8am with a Pit Boss meeting to go over the tasks for the day and reminding everyone that it was their responsibility to keep their crew safe at all times. Being safe, knowing what is going on, thinking and planning ahead will keep everyone happy with a goal of no trouble the pits. 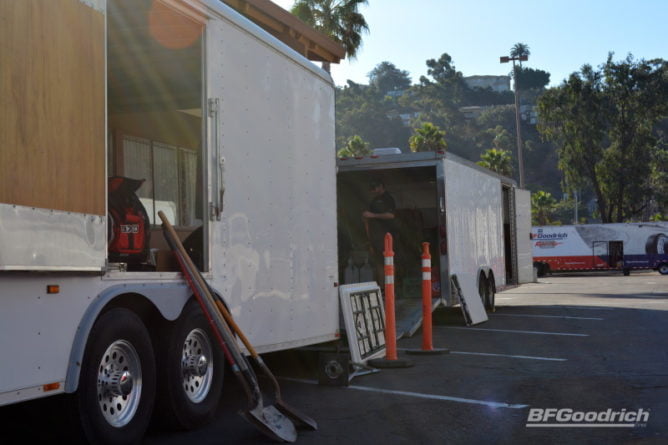 Knowing where Pit 4 was located, sadly we knew we wouldn’t be able to see them during race day. We decided to track their progress on this first day of pit support. Today was the calm before the storm. The day of lists and double checking more lists. The day of organization and cleaning. Pit Boss Matt Medina has been running BFGoodrich All-Terrain Tires since he was 16 years old and has always wanted to be part of the Baja racing experience. One day he wants to race, but in the meantime, he has been a volunteer since 2007 until 4 years ago when he was asked by Frank to become a pit leader. “Being a pit leader is a serious thing! It is an honor. We are there to help everyone and keep them moving down the racecourse,” said Medina. “Today we are organizing to see what I have in my trailer and what Doug has in his. We started our grocery shopping yesterday – I bought $600 worth of meat. Yes, that is a smoker and a grill – we like to eat good.” As everything finished getting organized, we headed in for the 12pm Communications meeting and luncheon. The core to the meeting was making sure that everyone was on the same schedule of how to work the radio relay for tracking the vehicles. There was also more discussions about the week’s vehicle movement schedule and keeping their pit teams safe. As we went back out to the trailers, the Pit 4 team gathered up their radio/communication equipment, started testing the satellite phone and went about acquiring a large antenna. They took delivery of their first 20 tires for the BC Teams. They packed away their boxes of water, stickers, crew t-shirts and sweatshirts. They counted safety equipment and accounted for fuel dump cans and first aid kits.   The trailers looked significantly different from 6 hours prior. They were ready to be loaded – an anticipated 100 tires will be dropped off tomorrow for them to have available as racers come through. 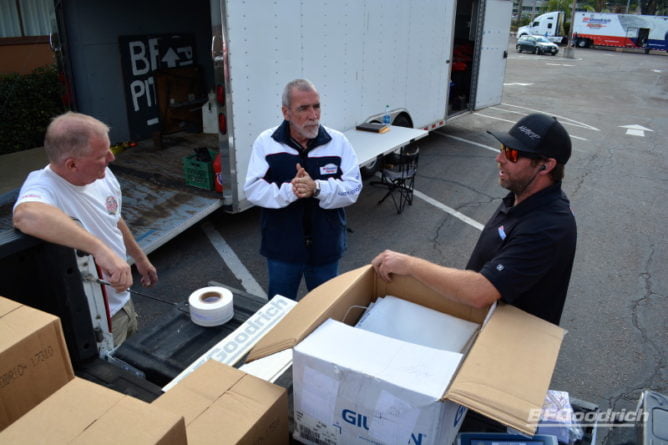 It wasn’t long before the sun was ready to set and it was time for our 5pm wrap up meeting. The pit bosses joined back together to recognize any challenges, account for their number of fueling suits, helmets, baklavas, gloves and dump cans. With little challenges, the groups closed up their trucks and headed to dinner. Or, in the case of Matt Medina, who had already missed a wedding ceremony he was supposed to attend, rushed out so he could make it too the reception; followed by the grocery store to buy all the snacks and requested items from his team.

The Quiet Giveback by the BFGoodrich Tires Pits

Did you know that each year Frank DeAngelo and Nate Hunt head up a Give Back program for Baja? During their months of pre-running they find schools, orphanages, medical facilities or Missions that have needs. This year they found a unique Volunteer Fire Department with an Ambulance that takes care of a 200-mile stretch of highway where there are no services. Both the fire truck and ambulance are custom built and very cool, according to Frank. 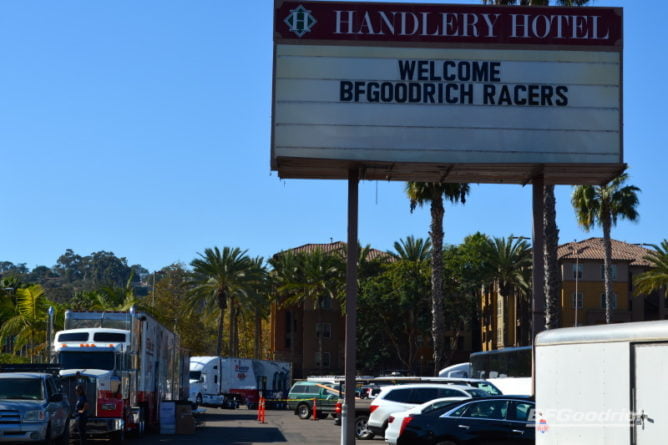 At the pit meeting, the group will have a bucket out for donations for the cause. Their need is a set of tires that will be purchased from a dealer in Ensenada and the rest of the money will be available for additional supplies and support. Pit 5 will be responsible for presenting the tires and mounting them for the volunteer department. We look forward to reporting back on this support effort.

We will be Tracking All Week

As we continue our mission to uncover everything it takes to help host these pits, I look forward to reporting on more statistical numbers that are staggering in proportion. Each of the pits has a life of their own, not one is similar other than the top-notch customer service you will receive as a racer and pit crew. We have only cracked the surface! 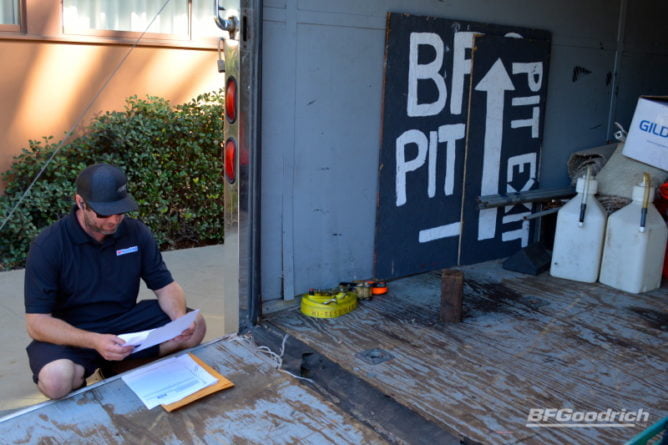 We will be continuing the coverage of the Pit Exchange tomorrow and then the Parade of Pits into Baja on Monday. As the pits settle into their locations Tuesday and Wednesday we are going to participate in Contingency and work at finding all the ladies racing to feature on Ladies Offroad Network. Come raceday, it will be a different chase for us…our goal is to drop into all of the BFGoodrich Tires pits to see how they operate, check in on the racers, try some of their chef’s food and judge their Outhouses. Yes, you read that right! <READ STORY HERE>

Check back daily for more updates…